With a coffee mug in my hand and my sleep slippers, I quickly went to go see Seven Kingdoms who was performing in The Alhambra Theater. A lot of Floridians, including myself are already familiar with the band since they are from Tampa. The band being humble, down to earth and very humorous delivered a great performance, their lyrical themes are based on George RR Martin’s Game of Thrones. As soon as the lights dimmed, the band came out, and Sabrina came on stage wearing burger sleep slippers, this instantly made me laugh and I thought to myself “great minds think alike” so I raised my cup of coffee as a form of cheer. A lot of the songs they performed that morning were from their new album “Decennium” which included the song “Kingslayer”.

As their set was ending, the stage crew were quickly getting ready to set up for the famous “All Star Jam” (Jamming with Jeff Waters in International Waters). This is something special and unique that could only be seen in the 70000 Tons Cruise. Over the years it has gained it’s popularity making it the most popular show throughout the festival. According to Jeff Waters (guitarist of Annihilator) this used to be held in a smaller stage but with high demand and popularity it was later moved to The Alhambra Theater. Every year to make this event entertaining, 50 musicians cover and play legendary songs that we all know and love. Below is the sets and musical ensembles: 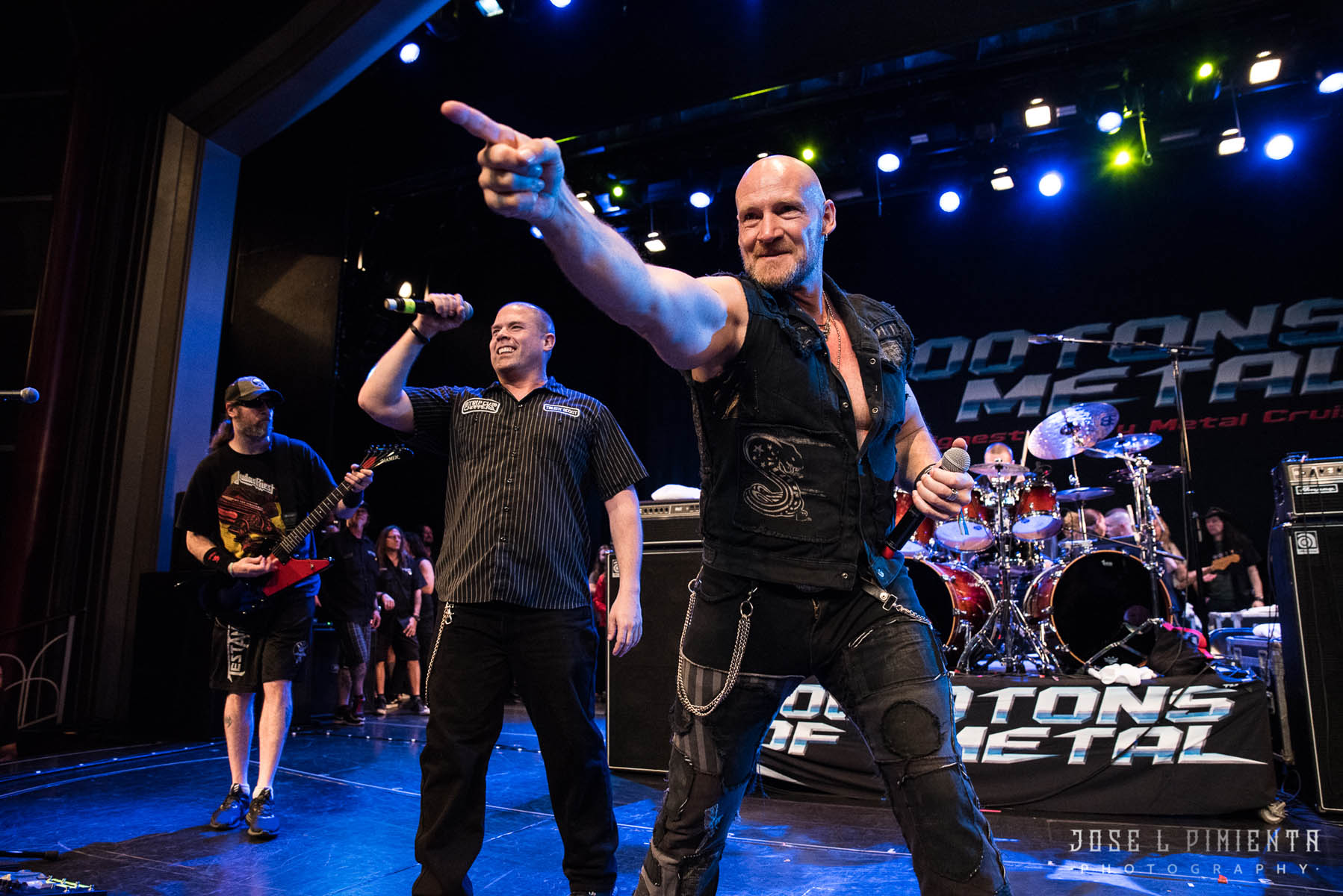 The All Star Metal Jam

Estonian Metal band, Metsatöll, was performing next at the Studio B. While performing “Kivine Maa” their music resembled ‘early man music’ mixed with heavy metal riffs. During their last song the crowd was playing the air drums in a very festive way as if we were in an Estonian forest.

There’s always a tradition in the 70000 tons and that is that on the last day a lot of fans dress in costume, just like you would for Halloween. Many characters including a metalhead with a long beard dressed as the pink power ranger, two T-rexes,  Dr. Rockzo (the clown from Metalocalypse), Jesus and few controversial consumes to say the least. I was sitting in the Alhambra Theater, when a lovely young woman from Norway sat next to me and we started to speak about make-up and picked up in conversation. Another thing about 70000 Tons is that you can always meet new people and become friends instantly, because we all have a mutual interests and enjoy similar things.

Septicflesh delivered a combination of extreme, symphonic and death metal in their performance. Their backdrop had a baby fetus surrounded by snakes as this is the artwork from their new album, “Codex Omega” the lights were flashing and everyone was pumped. Starting off with their opening song “Portrait of a Headless Man” that’s when the crowd surfers began their way. Spiros, the vocalist stated “this next song is about a goddess” while introducing the song “Trinity” this in particular made me laugh because there was a girl dressed as a Greek goddess crowd surfing in a very godly pose. Other funny moments were during one of their songs a fan dressed as Papa Emeritus (of the band Ghost) stood up and raised his arms just like Papa would do in his performances. The action was made with one of Septicflesh’s opening songs that had a high symphonic sound resembling a church or mass session. 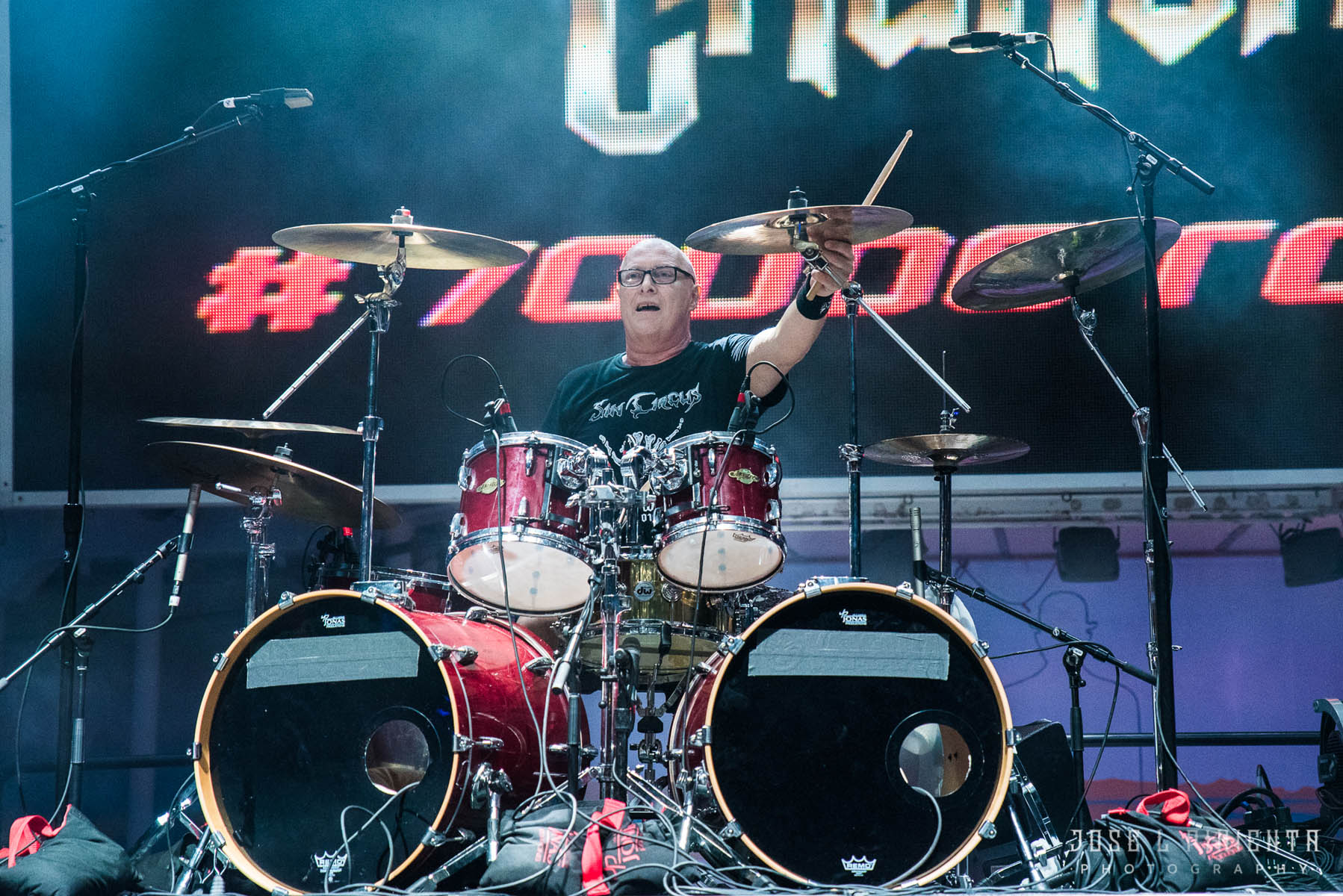 I made my way to the Windjammer to grab a quick bite, funny enough I was by the Italian section of the buffet checking out what there was and then came Fabio Lione of Rhapsody, while next to me serving his food, he began to sing to himself, it made me smile as I left to go to the other part of the buffet. Rhapsody was next to perform in the pool deck so I guess Fabio was fueling up before his performance. It was also their last set in the cruise as a band, since it was their ‘20th Anniversary Farewell Tour’

It was time to head back, luckily the seat was still available where I was so I sat down right when Dark Tranquility started, in perfect timing I felt relaxed and ready for the show. The band started off with an old classic “Monochromatic Stains”. Fans crowd surfing in different silly costumes, made Mikael Stanne and the rest of the band laugh a few times. Mikael at one point said “you guys crack me up” as he was ready to perform the next song, being a good and humbled front man Mikael reached out to each crowd surfer as he held their hands to help them to safety. Mikael dedicated a special song to his friend George ‘Corpsegrinder’ Fisher from Cannibal Corpse, since they had toured together in the earlier years there was a song that George complimented and really loved. George wasn’t present for the show because he was watching “the big game, whatever that means” stated by Mikael. The big game that he mentioned was the Super Bowl Sunday that they always air/play in the Studio B bar. Many metal fans that love football go and watch the game, while bands are performing. 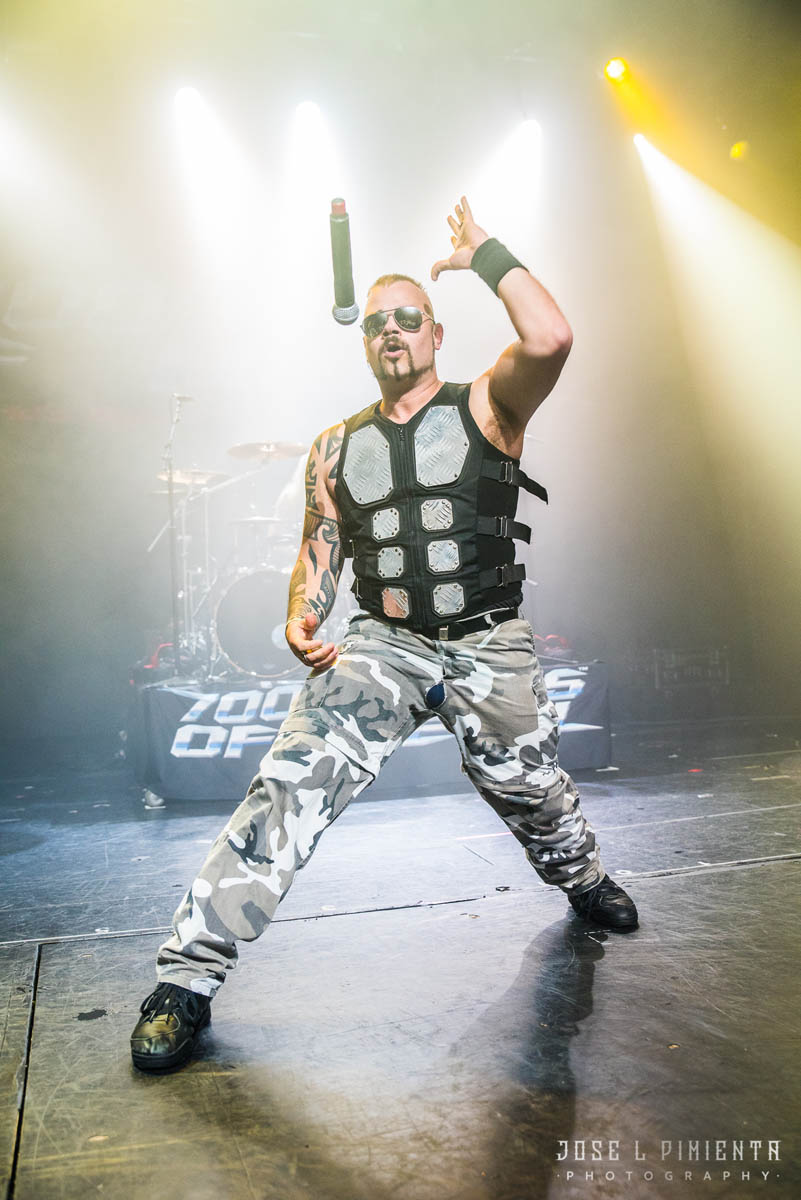 Waiting for the Swedish soldiers, Sabaton to perform I stayed in place and waited about 40 minutes, the time went by quickly as I was watching more characters approaching. This time there was a group of “Where’s Waldo” costumes throwing green and black balloons up in the air and the crowd that was waiting was playing a long tossing it to each other making sure it won’t hit the ground, I found it a bit amusing and satisfying to watch. While Sabaton was playing, from the balcony there was a few fans throwing ‘Glow in the dark’ necklaces and bracelets into the pit. Sabaton played a variety of songs from their discography: “Night Witches”, “The Last Battalion” and “The Final Solution” among others. For the song “Gott Mit Uns” most of the crowd voted for the Swedish Version. Many Swedish fans were present waving flags and especially a large one which was hanging from the second balcony.  During their song “Screaming Eagles” there was plenty of crowd surfers and mosh pit, including a hammerhead inflatable shark being thrown around and playing the role of a crowd surfer as well. This same shark was being thrown around during one of Cannibal Corpse’s set, which Corpsegrinder said looked like the movie “Sharknado”.

“A Lifetime of War” was played in Swedish version as well. This is when the crowd filled with lights. Many fans were chanting the intro for “Swedish Pagans” but the band said they won’t be performing that song that night since they already performed that song two nights ago. The band ended the set with “To Hell and Back” and they received a great good-bye response from the audience. 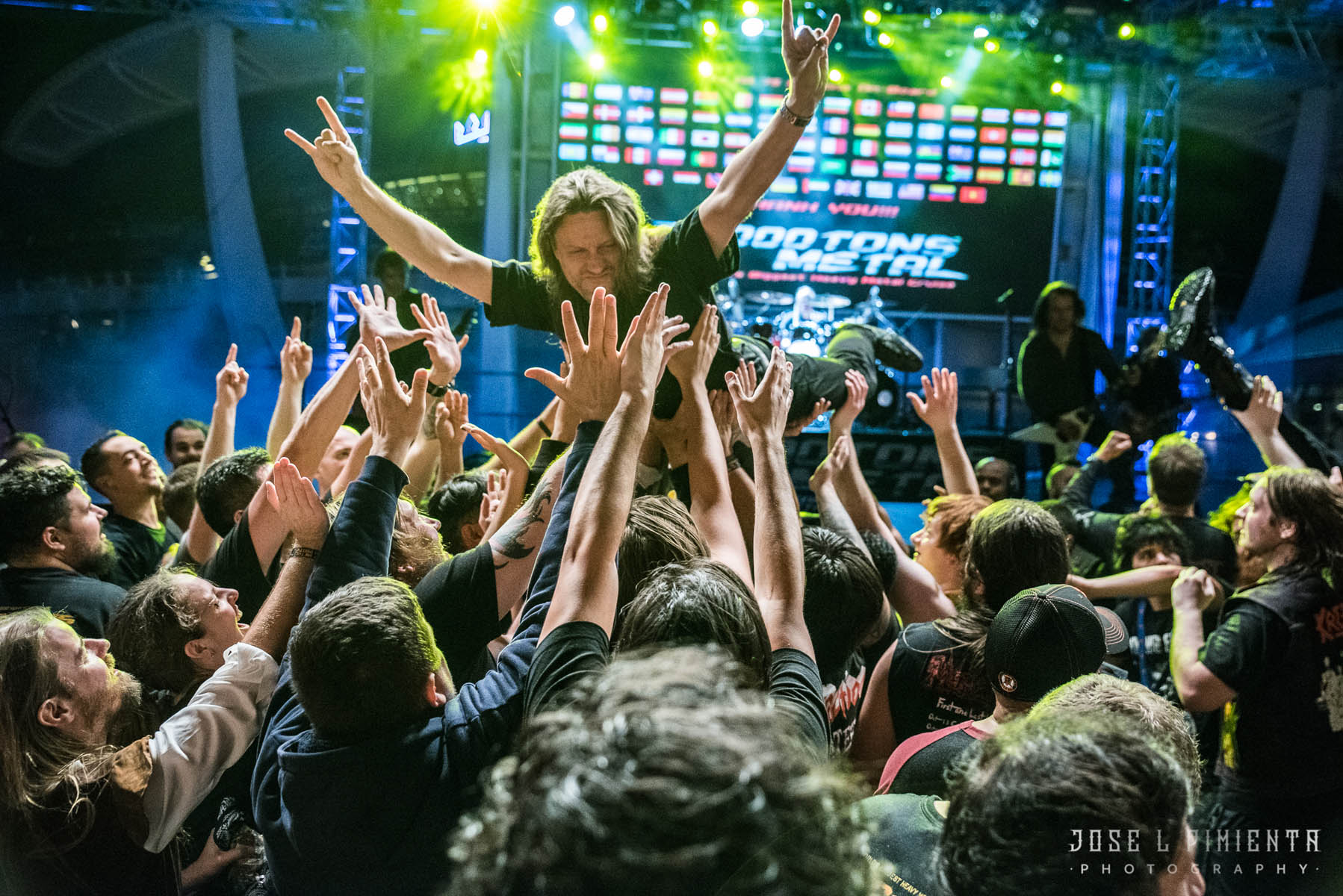 Kreator was next, so I decided to take a small break from my spot and go check out their set, with plenty of smokers outside my throat began to ache. As I was getting closer to the bar to get myself a water. The song in the back ground began to play “Satan is Real” that’s when one of the ship’s crew members looked with a horror look on her face. I giggled as I drank some water.

Andy “The Skipper” who is the creator and master mind behind 70000 Tons of Metal Cruise, always comes out at the end of the last day to have a short speech. Andy thanked everyone for being part of the 8th edition of this metal madness. He mentioned that there was 75 nations on board. 70000 Tons is like the United Nations of Metal, everyone from all over the world travel just to be part of this special festival. He also pointed out next year’s destination which would be Labadee, Haiti just like the previous year, 2017. However, the bands are not yet announced until next Summer. Lastly Skipper threw himself into the crowd for some crowd surfing.

I was already headed back to The Alhambra theater where Alestorm was setting up to play in the last show of this year’s adventure. The crowd was definitely ready to embrace their pirate spirits one last time. One song in particular called “Drink” was asked in a bizarre manner, the question was which song version they preferred in “human form or dog form?” everyone requested the “dog version” It was pretty silly witnessing a song that was for dogs, with the vocalist barking like a canine. The band is definitely filled with a sense of humor and so are the fans, as they were pretending to paddle a boat on the floor while the song “Nancy The Tavern Wench” was being performed. During the set, the band’s massive (already iconic) inflatable Rubber Duckie was bouncing around the crowd, that’s when the Rubber Duckie got sliced by the fans accidentally, Chris shouted “Murder! that’s why we can’t have nice things!” but in all good fun, the Duckie was already gone. 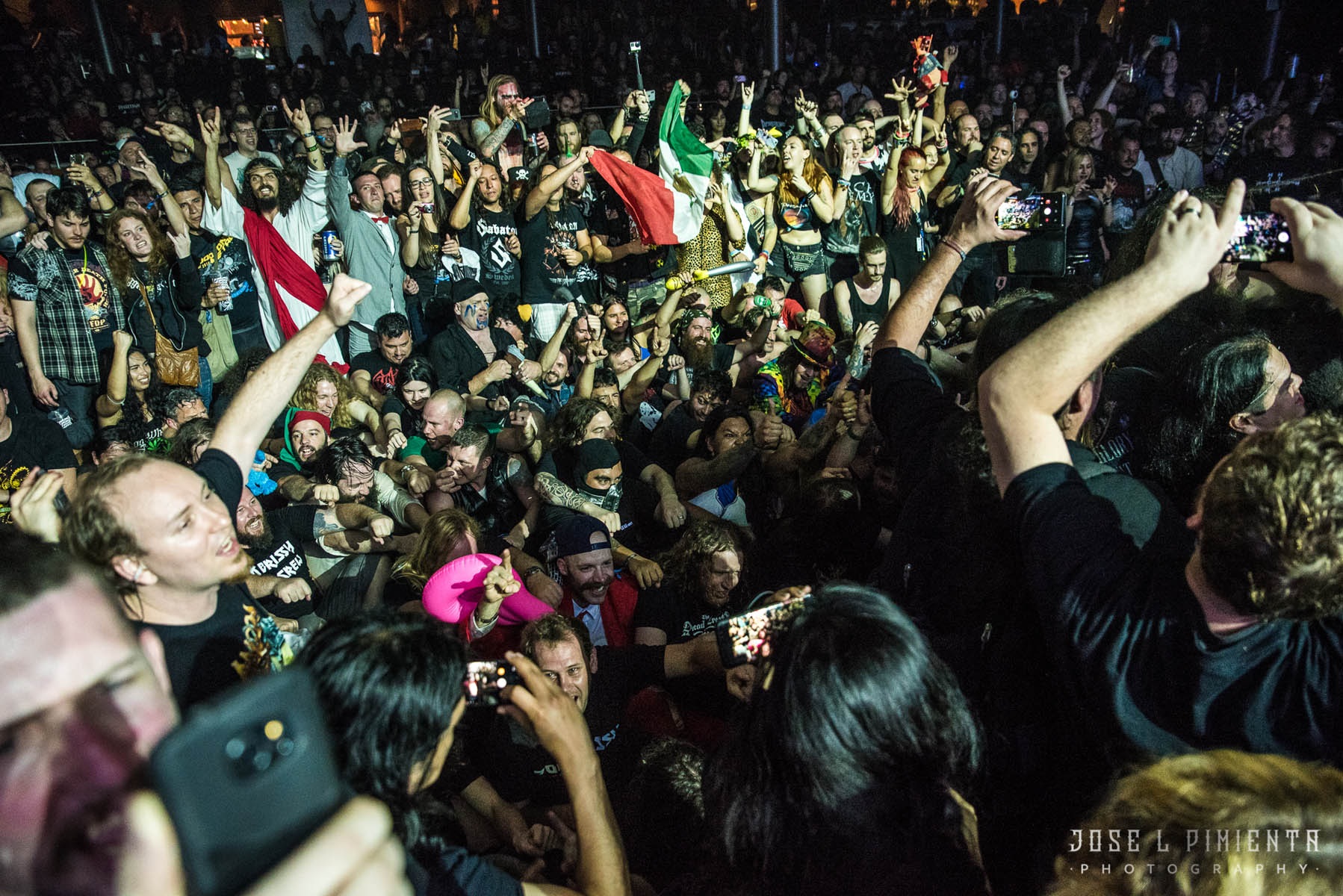 With costumes such as Pee Wee Herman singing and dancing along, one of the fans dressed as Jesus jumped on stage to sing along but was immediately escorted out by the security. Everyone, was pretty much having a party at this moment. As the band announced their last song that’s when the crowd showed sadness as they did not want the night to end. Chris said “Are you all ready to get back to the cold and your miserable lives? Yeah me neither!” I instantly laughed with his statement. Their last song was “Fucked with an Anchor” with catchy chorus and happy melodies this was the perfect vehicle for the fans to deliver even more of crowd surfers to the front of the stage. Their set came to an end and the masses were saddened because this was the final performance of the cruise.

There’s always the after party which means the night was still not over, being held at the Solarium Pool Deck section, plenty of fans gathered to join the Karaoke until sunrise. Some musicians and singers also joined the fun like they do every year. Some of the fans singing classic tunes such as “Walk” by Pantera and “War Pigs” by Black Sabbath brought a lot of sing alongs and fun times. Corpsegrinder and Derrick Green were both hanging out on the table next to the mini stage, laughing and enjoying with the fan Karaoke. Some of the special epic surprises was Jesper Anastasiadis (bassist of Turisas and Korpiklaani) sang in the karaoke for Judas Priest‘ “You’ve Got Another Thing Comin’”. Another classic song requested saw Tommy Johansson (guitarist of Sabaton) and Siegfried Samer (Vocalist of Visions of Atlantis) singing Survivor‘s “Eye of the Tiger”. It was already 4:30 AM and the sailors were still going, but this was the time when I was ready to hit the bed. The karaoke continued until the next morning, even though the ship was being rocked by heavy waves, heading back to Ft. Lauderdale, FL, our final destination. This was the end of round 8 of 70000 Tons of Metal. I can’t wait to be back to create more memories as it’s always a pleasure to be back as this is a unique festival experience.

Check out the other days coverage:  Day One, Day Two, and Day Three