I’m back, and I’ve finally recovered from the excitement and chaos of what I consider the best weekend of the year. It takes a while to comprehend the magnitude of everything that happens on the infamous “BOAT,” but there’s no question that for me, it is an experience that has proven itself absolutely life-changing. Of the many pleasures in life, this is one that I will never grow tired of, and would be mistaken to take for granted.

This was my fourth year taking to the seas with my fellow metalheads, celebrating music onboard the indomitable 70000 Tons of Metal cruise. Despite having three years under my belt, I still felt a childlike excitement as I made my way to Port Everglades in Fort Lauderdale, Florida. Sixty bands and four days awaited myself and thousands of adoring fans from across the globe, all making the annual pilgrimage to the ninth celebration of metal on the open ocean. Just as in years past, there was the promise of shows running around the clock, and implicit guarantees of casual conversations with the very musicians that draw such stunning crowds. 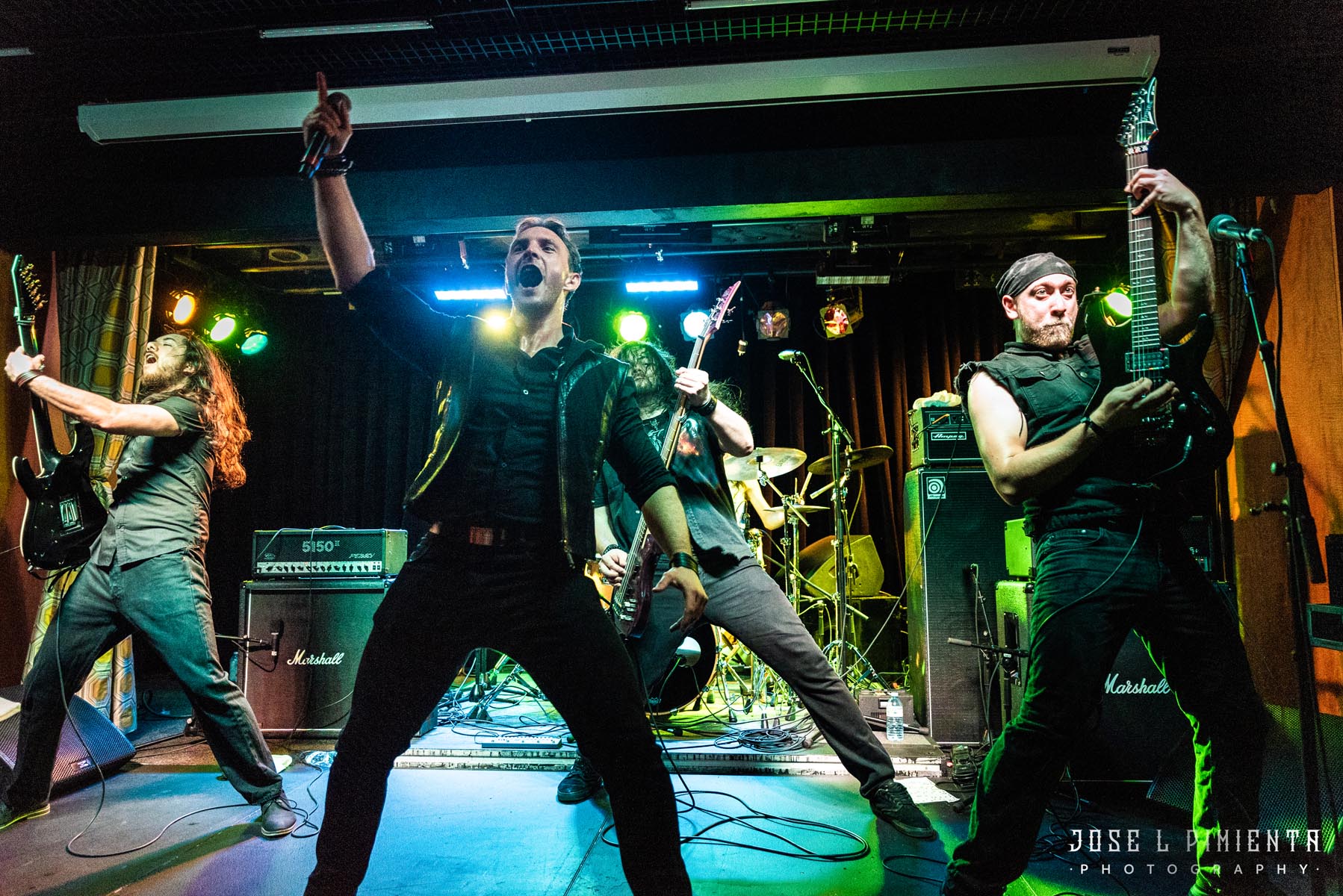 Arriving at mid-morning on January 31st, it took no time before my wife, friends, and I were already engaged in conversation with a crowd that would soon become family. Excitement was buzzing in the air to the point it was nearly electric, smiles and sunshine filling the gaps between strangers waiting eagerly to check in. Both new and familiar faces filled the line waiting to board, but anticipation for the adventure that lay ahead, along with a common passion, had already spurred new friendships. Despite arriving with my wife and friends, I spent my morning bonding with a metalhead from Pamplona, Spain, over his “Los Suaves” hoodie and our shared love for Spanish heavy metal.

Independence of the Seas, the majestic vessel which we would call home for the duration of the festival, was as stunning now as when I saw it for the first time. Calling such a ship merely “large” would do a disservice to its splendor and sheer magnitude. It is truly a floating city, complete with berthings to fill out a high-rise hotel, full-size theaters, and enough entertainment features to comprise its own amusement park. No matter the amenities promised, the talent that would soon fill the ship’s quarters somehow made it even more spectacular in its grace.

As this was the first cruise for a number of my friends, my wife and I took the time to give them a tour of the main floors before chaos would render such a task impossible. With the marathon of music and socialization that lay ahead of us, we took the time to point out the key venues, where to get snacks when running between shows, and the best shortcuts for getting around the floating hotel. On a ship so large, even a small tour is quite demanding, and we found ourselves more than ready for lunch by the time our impromptu adventure was over. 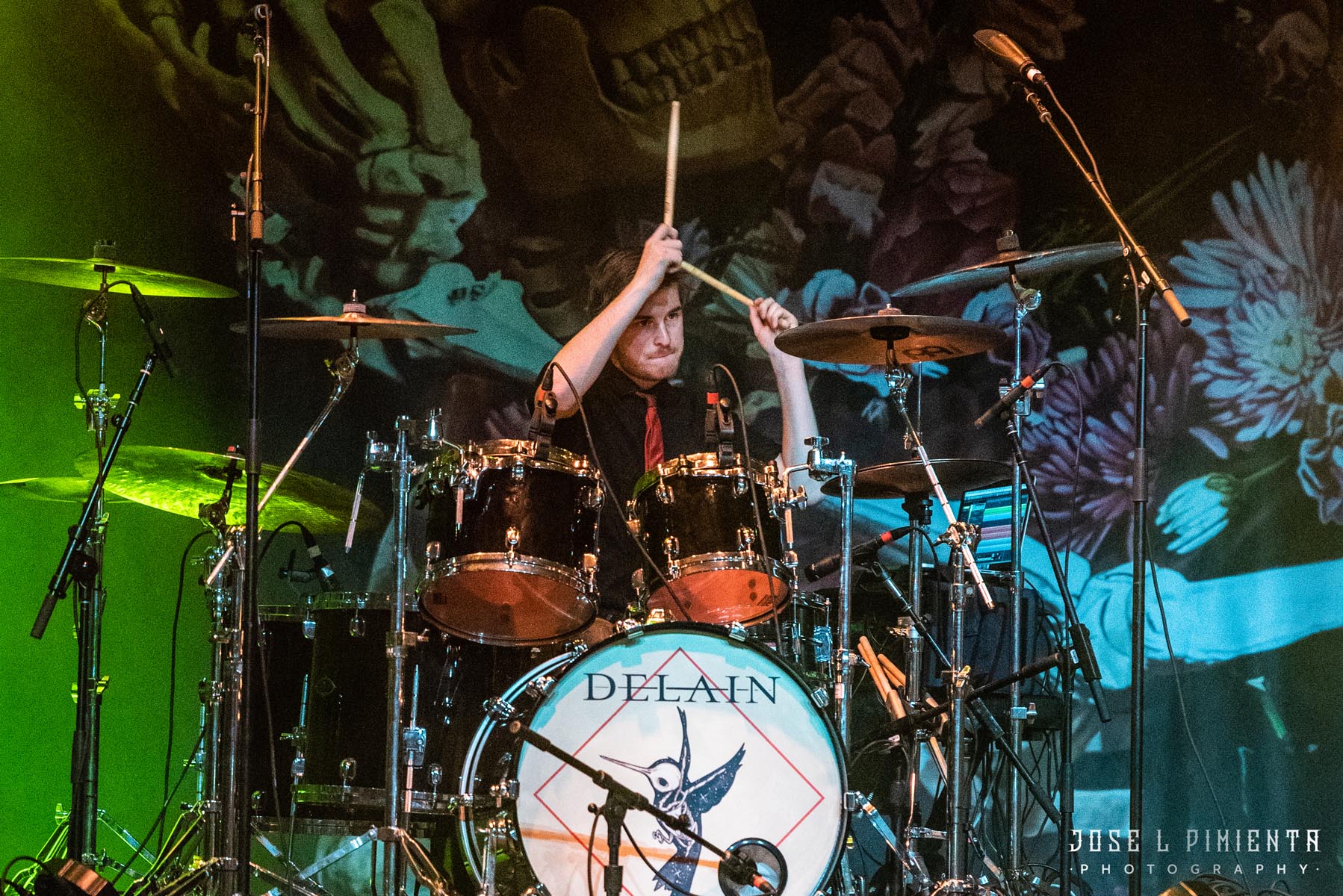 While our stateroom was being prepared, we took our lunch at the Windjammer buffet, but found ourselves back out exploring shortly afterwards. The top decks were our next point of investigation, where we were able to look at the surfing machine, rock climbing wall, and hammocks that spoke of serenity. Those hammocks tempted a kind of calmness that would be difficult to find on the heaviest cruise in the world, but the concertgoers that were slowly filling the halls hadn’t gathered in Florida for the sake of finding a peaceful escape.

The first show of the festival took place in the Studio B Ice Rink, where Finnish band Mors Principium Est would ignite the crowd with their unique take on melodic death metal, hitting heavy from the very start. Even though it was just past 9:00, the studio was already packed with an excited crowd, ready to kick off the festival with fresh energy and abundant enthusiasm. Both the band and the crowd seemed to feed off of one another, and though the faces of the performing musicians were stoic, the speed at which they shredded all but forced the crowd into a frenzy.

After this incredible start to an evening filled with talent, I made my way to the Star Lounge for a performance by Austrain power metal band Dragony. A touch more lighthearted than the darkness which had begun the voyage, Dragony pushed on the more swelling grandeur of symphonic-touched power metal to fuel their set. The crisp voice of Siegfried Samer effortlessly filled the lounge, and their set leaned heavily into crowd favorites, enjoyable enough to win over even those standing towards the back with their arms crossed. Following their heaven-sent set, I continued my night in the Royal Theater for Delain’s first show of the cruise. 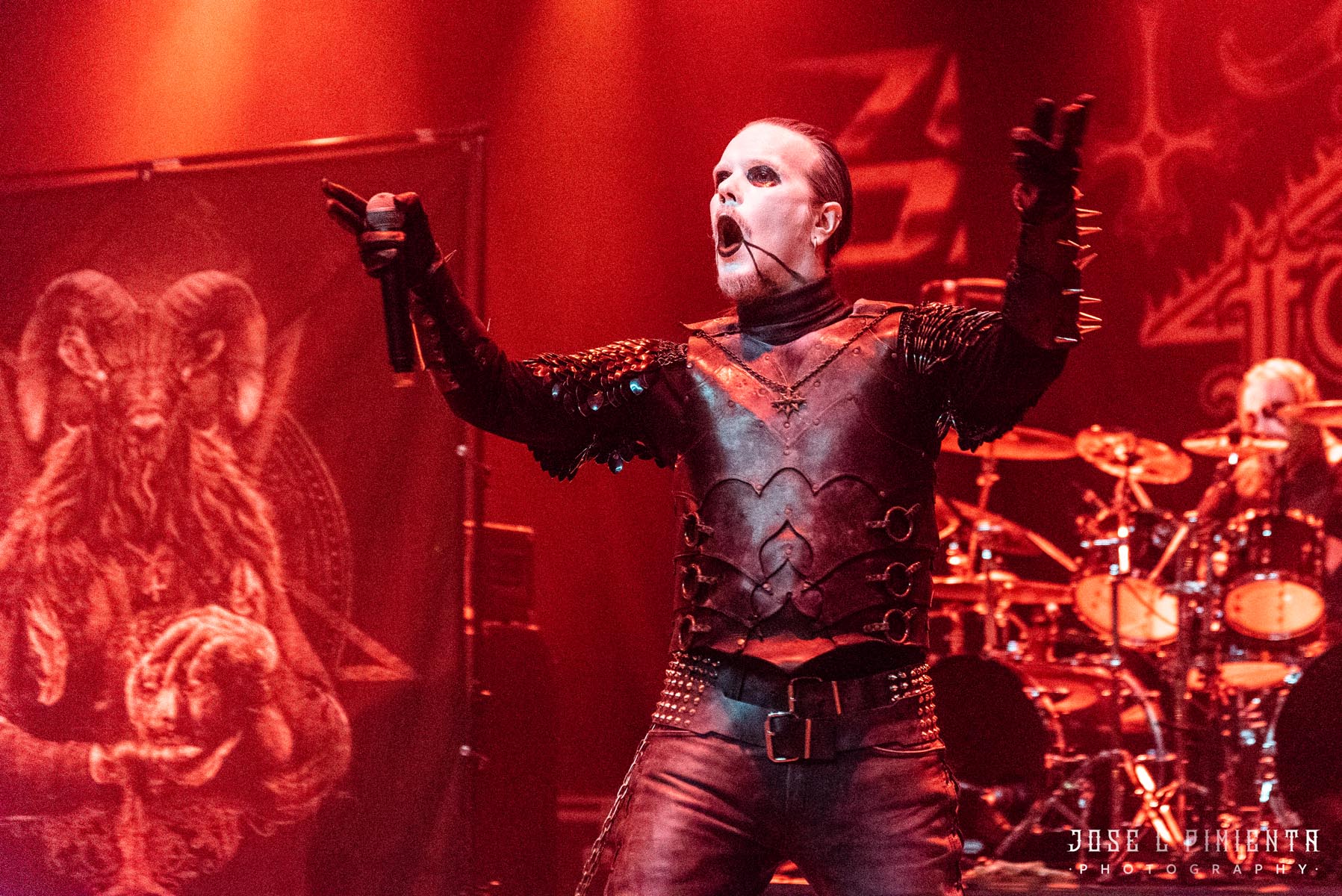 As cruise veterans, the symphonic metal group was more than ready to put on a show for the newest round of sailors, tailoring their set to a diverse crowd gathered from all around the world. They hit a perfect combination of their most beloved classics against brand new material from their upcoming album, “Hunter’s Moon,” engaging both longtime fans and first-time listeners alike. Though they were certainly flexing their skills in this show of new music, they did so with seamless execution, not stumbling once over the electric symphony they crafted. Vocalist Anne Invernizzi seemed to be born for a stage on the sea, bringing a combination of both grace and theatrics to their first opportunity to wow with her vocal prowess.

I found myself back in Studio B shortly afterwards, already caught up entirely in the chaos of a festival that never sleeps. Any illusions of time had melted away when I threw myself into the next crowd, where the festival’s first dose of folk was delivered by the heavy hammer of TÝR’s Faroese might. With the audience chanting and dancing with the rhythm of “By the Sword in My Hand,” it seemed that the party had officially begun. Backed by the fierce screams of Heri Joensen, it seemed that the audience believed themselves to be on a genuine Viking adventure, drinks in hand to celebrate the occasion. As aggressive as it was pure, this display of kinship and joy was just a small precursor of the Armageddon I would soon experience a few decks below.

Darkness fell, both in the winter sky and in hearts across the ship, as black metal royalty took the stage in the aptly assigned Royal Theater. In their blackened intonations, Dark Funeral combined their trademark brutality with ominous on-stage imagery to craft an experience straight from the unforgiving Nordic winters. To pull myself from the chill that surrounded my heart in the moments after I escaped the theater, I wandered to the Star Lounge for the vibrant adventures painted by power metal masters Twilight Force. Shifting gears from growling funerary depths to the soaring might of vocalist Alessandro Conti was nearly enough to give me whiplash, but the shock was numbed as I gave in to tales of elves and wizards. To hear such different interpretations of what it means to adventure, both in fantasy and in self-concept, was another reminder of the sheer diversity of talent 70000 Tons of Metal draws in every year. 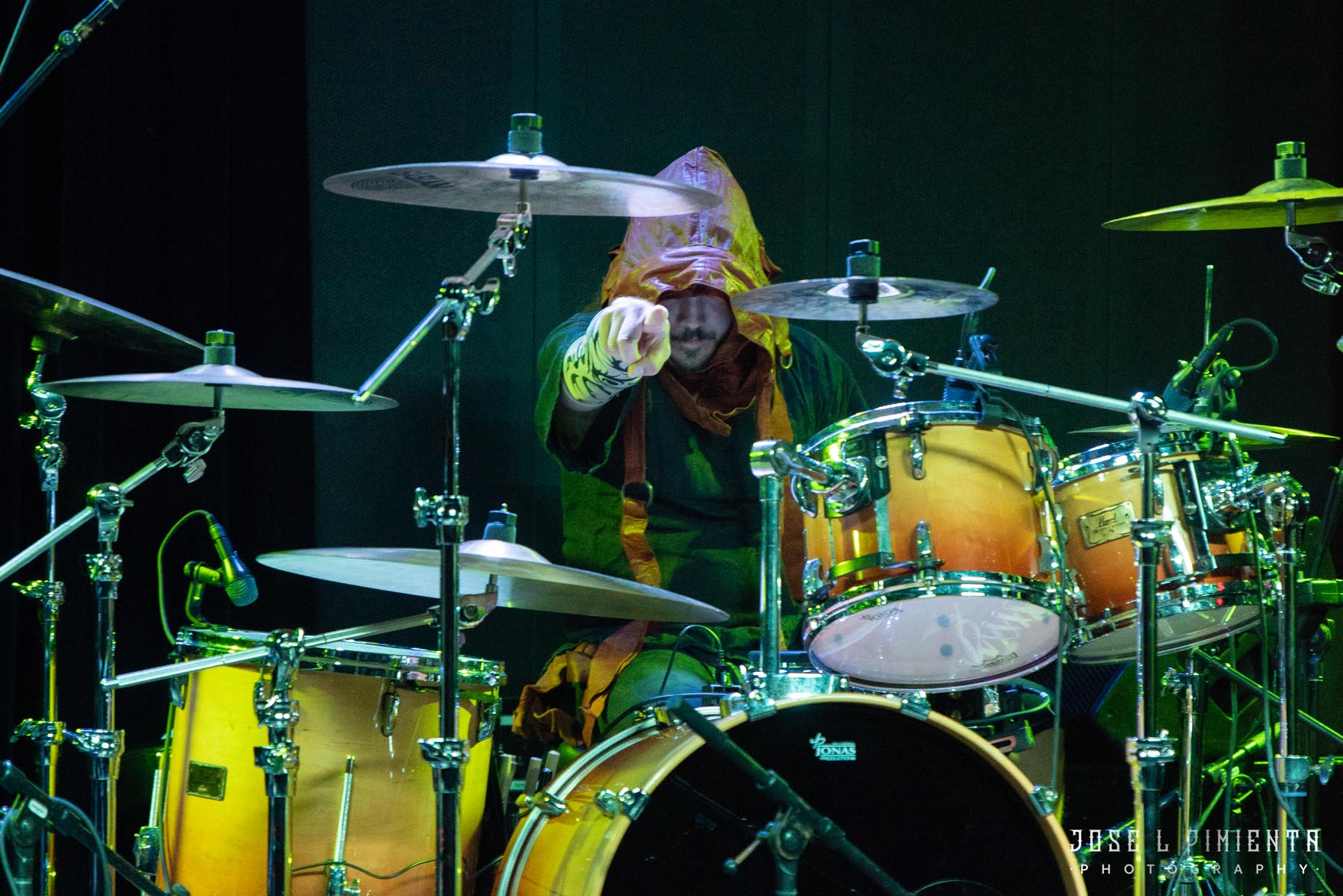 Through the casino I ventured in search of more chaos to sate my endless appetite for music. I found my way to the performance of Italian metallers Fleshgod Apocalypse, as they filled the Studio B Ice Rink with an energy that threw the crowd into a frenzy that manifested in thrilled, frantic moshing. This enthusiasm came from the band’s masterful mixture of the operatic and the aggressive, a flavor of symphonic death that they can claim as entirely their own. But it wasn’t merely their stellar performance that was a treat for those in attendance; at the end of their set, they debuted a new song, “Fury,” from the material they had been working on. This exclusive debut was not the only treat awaiting fans on the cruise, with many more to come, but all welcomed the novelty with open arms.

While the evening’s festivities may have all taken place over the course of a lifetime, it was only 2130 when we decided to take a break for dinner before throwing ourselves back into the tumultuous madness of the festival’s first day. Dinner was less of a proper meal, and more of an opportunity to regain feeling in our feet and try to recover our voices before we lost them entirely. Swedish supergroup Bloodbath was our dessert for the night, blending together old-Scandinavian with classic-Floridian death metal with such energy that they conquered the stage. Nick Holmes found himself a crowd favorite with his brilliant vocal performance, which he delivered dressed in a sharp, well-fitting suit weathered just enough to fit the band’s image. Though he clearly intended himself to be the center of attention, blinding white lights captured the entire set as clear as day, giving way to a clear view of the technical execution delivered by guitarist Anders “Blakkheim” Nyström.

German heavy metal was next on the menu, this time delivered by the legendary Accept. This band had the mammoth task of closing the big stage on Day Four, which meant that this first set was merely a warmup for the days to come, but that didn’t stop the practiced musicians from giving it their all. “Die by the Sword” gave fans a chorus to sing along to, and Wolf Hoffmann let loose with his iconic Gibson Flying V guitar, absolutely no reservation holding them back. No matter that this was only their first set, the performance was absolutely astonishing in both its enthusiastic delivery and crowd-tailored set. 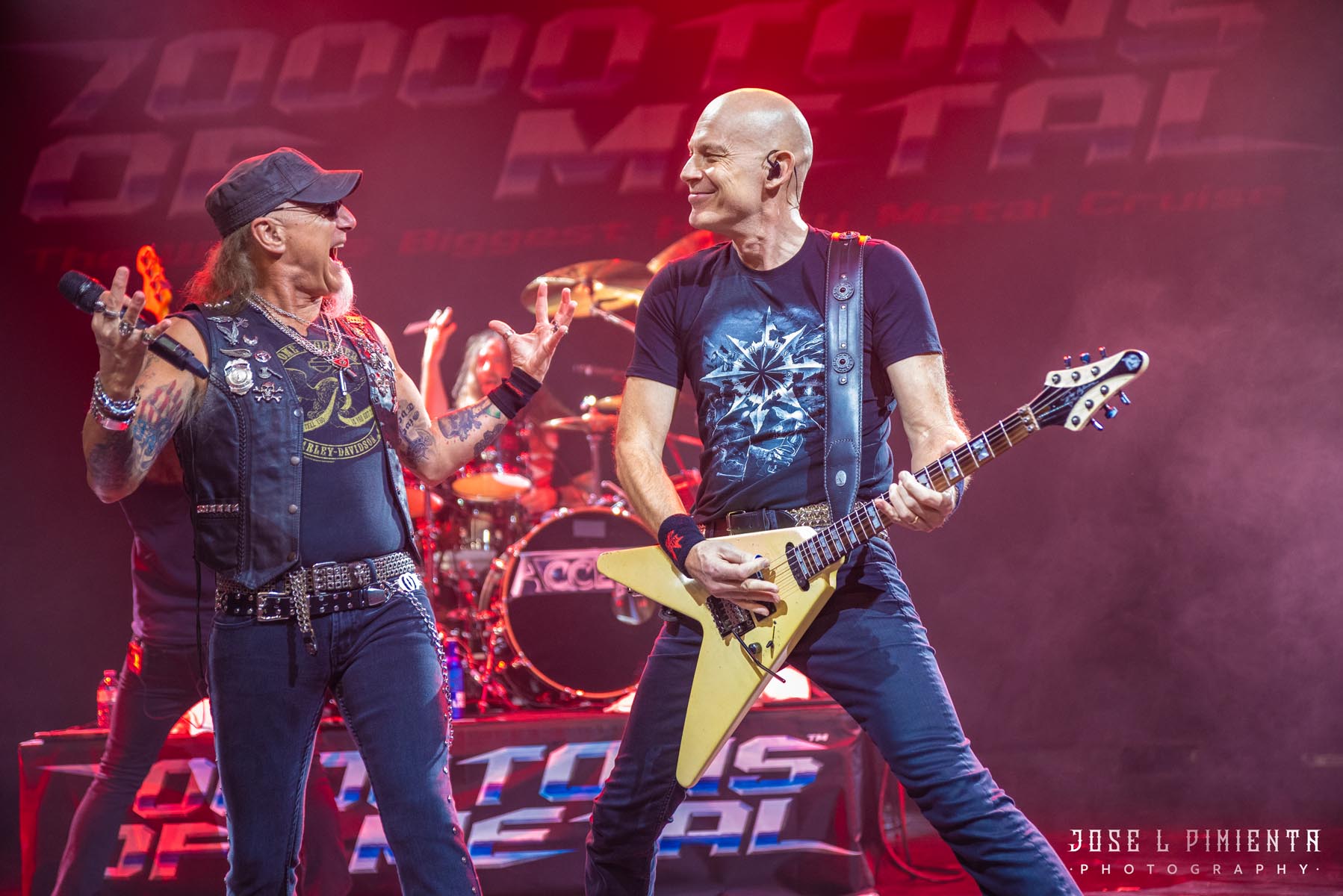 The next band brought us back to Sweden, and this was a group that I was looking forward to seeing with particular excitement. Having never had the privilege of seeing them perform live, even after many years of listening to their music, I found myself easily captivated by the heavy gloom of Tiamat’s gothic doom metal. The somber atmosphere was one that I immersed myself in eagerly, and the dark delights left me in eager anticipation for the second set they would deliver on Day Three.

Lighting up my soul after the shroud of shadows from doom was the indomitable thrash metal act Sodom. For Round 9 of the 70000 Tons of Metal cruise they had brought with them their newest lineup, with the notable return of Frank Blackfire on guitar. The theater was crushed beneath the might of their latest tracks, such as “Partisan” from their most recent album, and all were shaken by thrash anthems “Remember the Fallen” and “Agent Orange.”

To wrap up a world tour of different genres, our group closed the night with a final pass through the ice rink to revel in the orchestration of Dutch symphonic metal group MaYaN. No matter the fact it was already 0215 on the second day, they were absolutely tearing the place apart, and their stunning choreography between a full cast of vocalists and instrumentalists delivered a perfect closure to the first day. 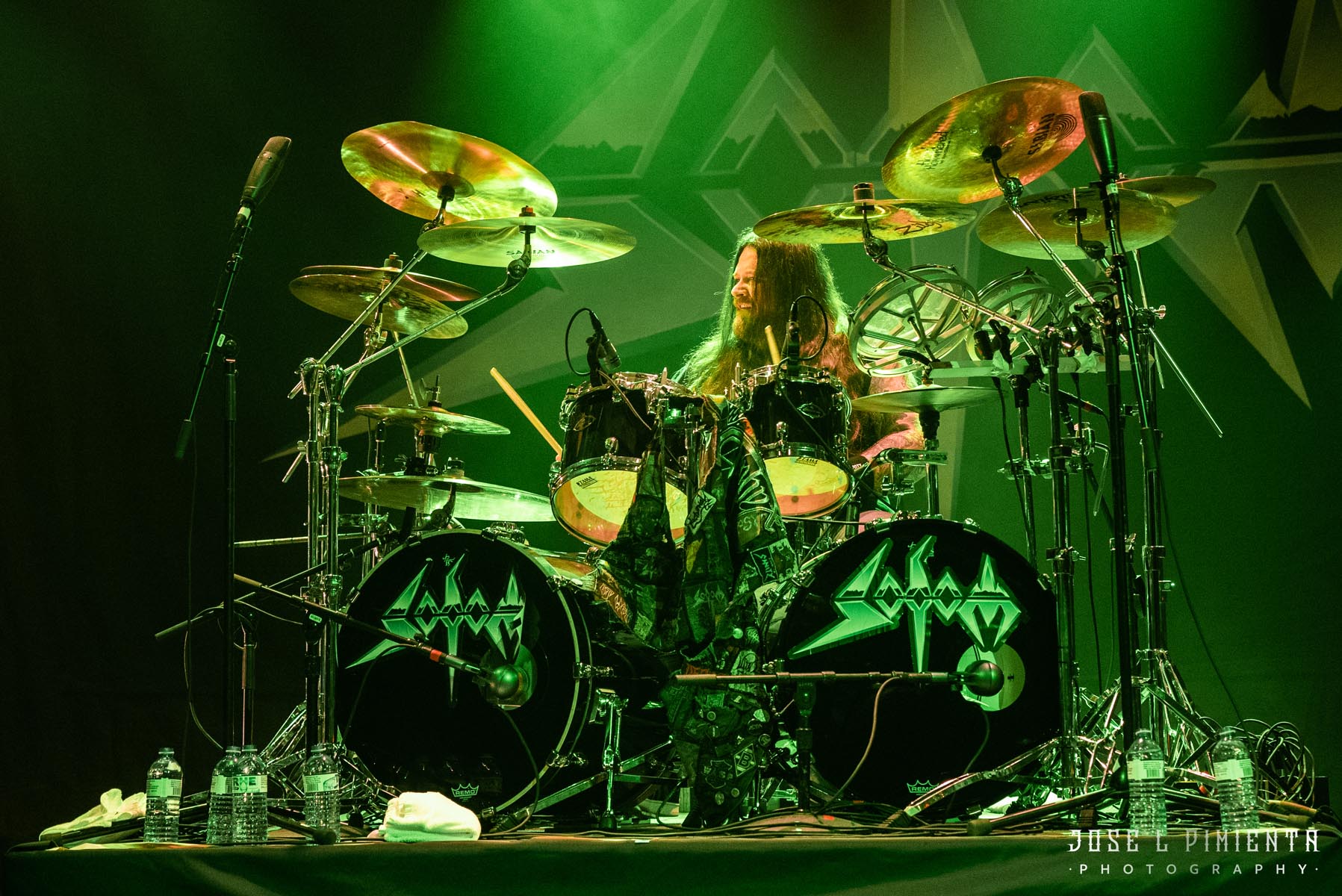 There’s no doubt that the first day set the bar incredibly high, as a year’s worth of top-tier acts had played their hearts out as we made our way across the sea. Adrenaline still rushing, I knew that I could look forward to three more days of grand adventures, and even more stunning performances from some of the greatest names in metal.

Check out the other days coverage:  Day Two, Day Three, and Day Four