Our morning got off to a bit of a late start, and we decided to take part in the various attendee-driven attractions to begin the day. First we walked by the Solarium, where the annual belly flop contest was taking place. There couldn’t have been a more amusing start to an incredibly memorable day, watching hilariously dressed contestants and hearing the warmth of laughter rising up from the crowd of spectators. From there, we went to the Solarium for a nice breakfast, drinking in the sights from our vantage point at the top of the world, where the entirety of the sea seemed to stretch around us and into infinity.

One of the more unique attractions of 70000 Tons of Metal was next on our list; the All Star Jam, taking place in the Royal Theater. This year, the jam session was hosted by Charlotte Wessels of Delain and Alexander Krull of Atrocity, both dynamic hosts that seemed set to entertain the crowd with a set of performances like no other. The best way to describe the All Star Jam is a dream where several supergroups, comprised of some of the most talented hands in metal, take on the genre’s all-time favorite tunes with grace and amusement. Though the music may well have been coming from another dimension, it only reaffirmed the immense talent that was contained within this city on the sea, and just what a privilege it was to have seen so many stunning performances in such a short span of time. 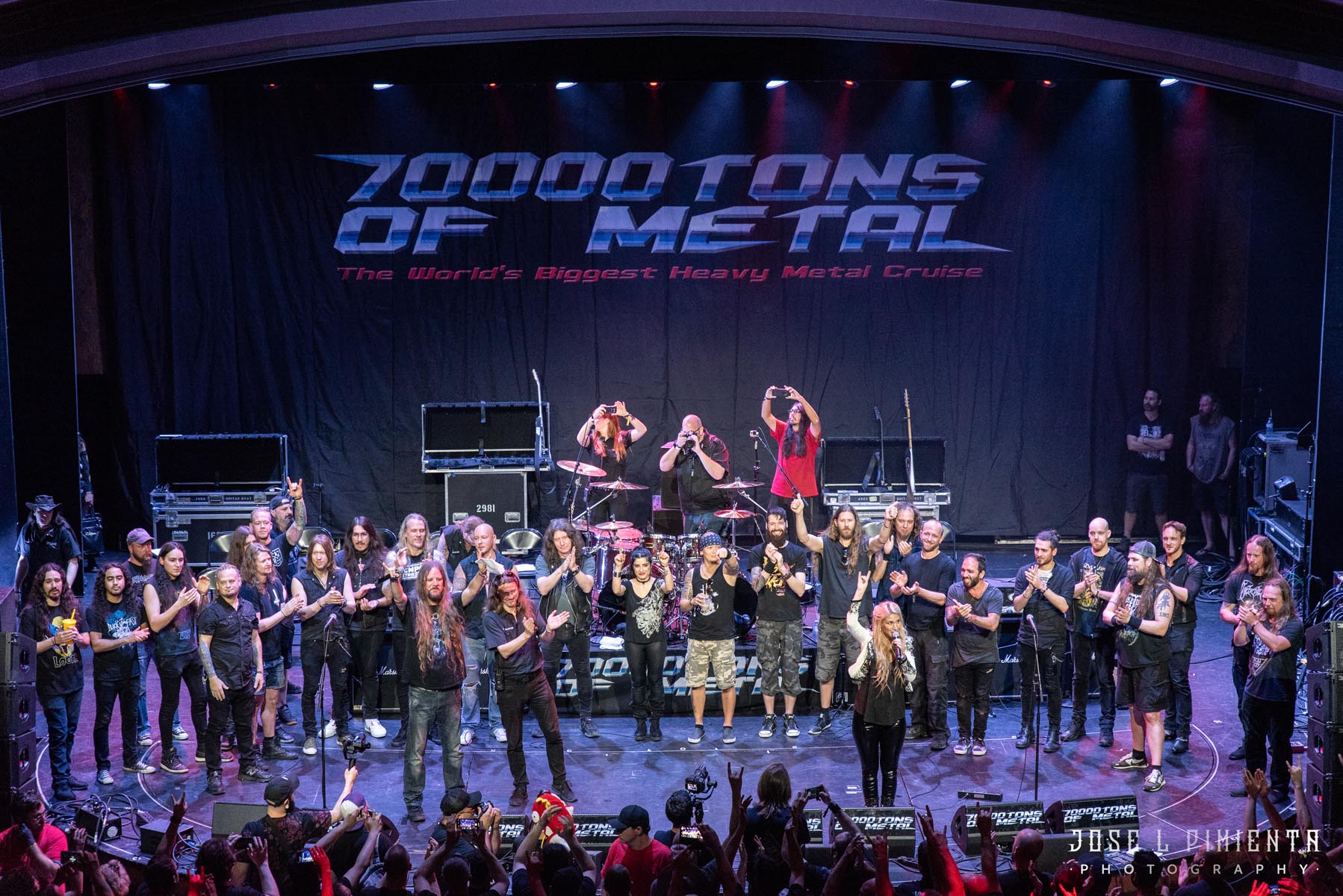 Later in the day, the Royal Theater fell into the clutches of the infamous Nekrogoblikon. Though some may say that their very own goblin was the star of the show, he managed to play the role of cheerleader as it was intended to be filled, enthusing the crowd without obscuring the talents of the musicians everyone had gathered to see. This was yet another band fueled by the act that they could put on for a crowd, blended with the aggressive bite of death metal, all cumulating in a cathartic release of screams and laughter.

It was at the pool deck watching Obituary where I spotted the first Pikachu of the evening. As is tradition on the ship, fans dress in costumes of all varieties, adding bright character and unexpected laughter to a day filled with crushingly heavy music. As out of place as the bright yellow onesie was in front of the Floridian death metal legends, it took nothing away from the ceaseless shredding and face-splitting screams that washed out over the crowded pools.

After Obituary, I went down to the Star Lounge to finally catch Italian melodic metal band Temperance. Just before the lights fell, I saw the best costume of the night; it was a group dressed as the four characters from the internationally renowned french comics “The Adventures of Asterix.” When I spoke to them, they claimed that they had arrived at Temperance’s set to “fight the Italians,” which earned them a chuckle on my part.

As for the performance, it was all that I had anticipated from a band said to have such dynamic stage presence. Even in the smaller venue, they threw their all into winning over the hearts of their fans, impressing with both a wide vocal range and technical mastery over their instruments. 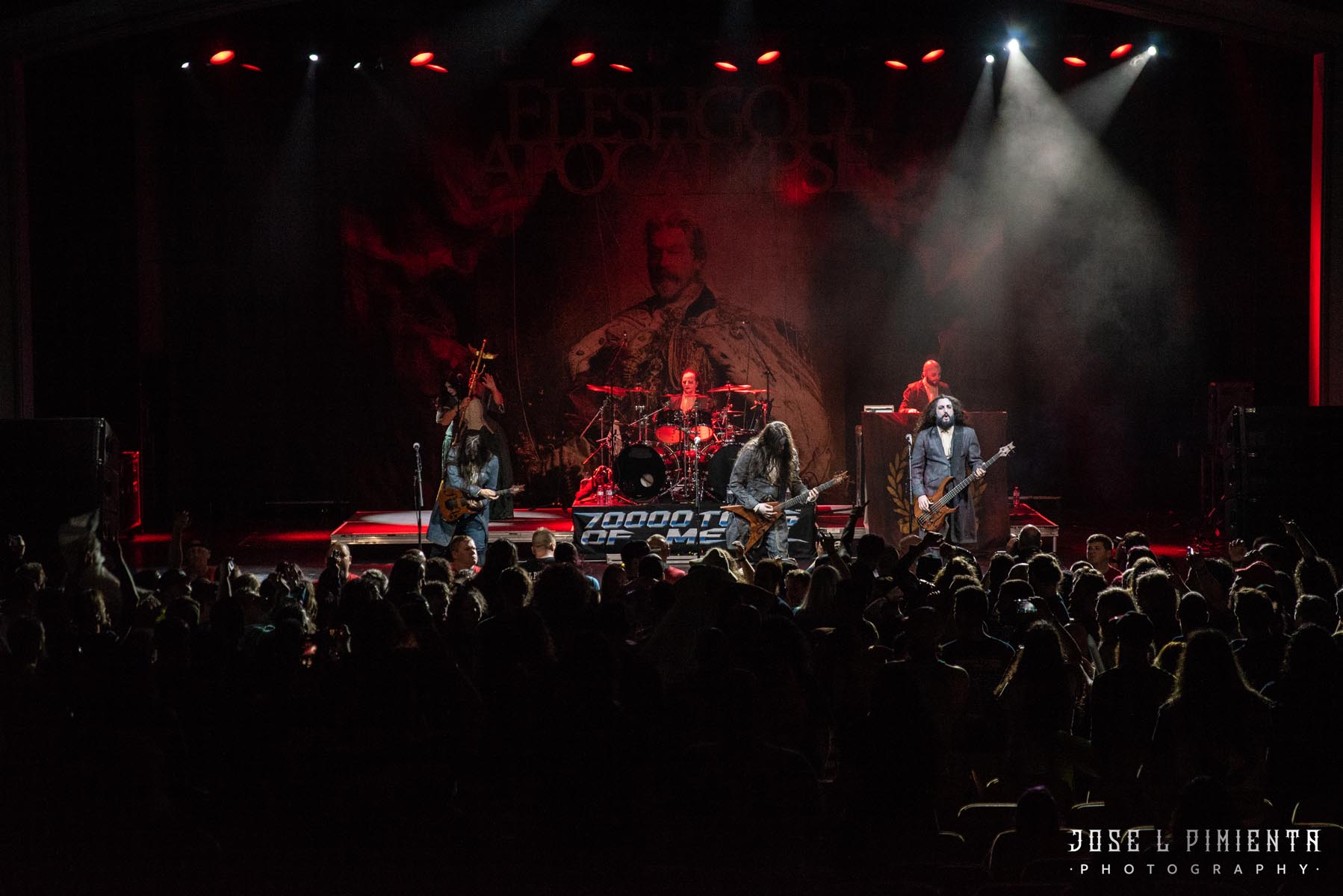 Just two decks below, the Brazilian trio Krisiun were crushing bones with their speed and sheer power. Though the day had already been filled with a number of memorable death metal performances, it was a treat to see a stage that felt so empty compared to the full ensembles other bands had gathered. For just three bodies on the stage, their execution and magnetic draw were impressive, and their spot on the cruise’s roster was certainly well earned.

Halfway through their set, I wandered to where Kalmah played, where I had the last opportunity of the year to catch the glorious sunset while metal filled my soul. While the sky was painted all hues of red and orange in the horizon, the mosh pit in front of the stage filled with an incredible cast of costumes. There were more brightly colored Pikachus than I could count, throwing themselves into a gathering of Ninja Turtles, Thor, Jesus, and other beings from both fiction and folklore. From the smiles on the faces of the musicians on stage, it seemed that I wasn’t the only one enjoying the fan-provided entertainment of the evening.

Back at the theater, Arkona began their second set. This one began with Masha singing traditional Russian melodies while playing the drums, and she played as though there was no one present to come between her heart and the music. Their brand of folk metal is what I can only call enchanting, but this set was delivered with such heart that it quickly became my personal favorite show of theirs. As much soul as the show had, the crowd wasn’t one to sit and watch their talents idly; the room surrendered to a mosh pit that sent costumed attendees flying across the barricade. 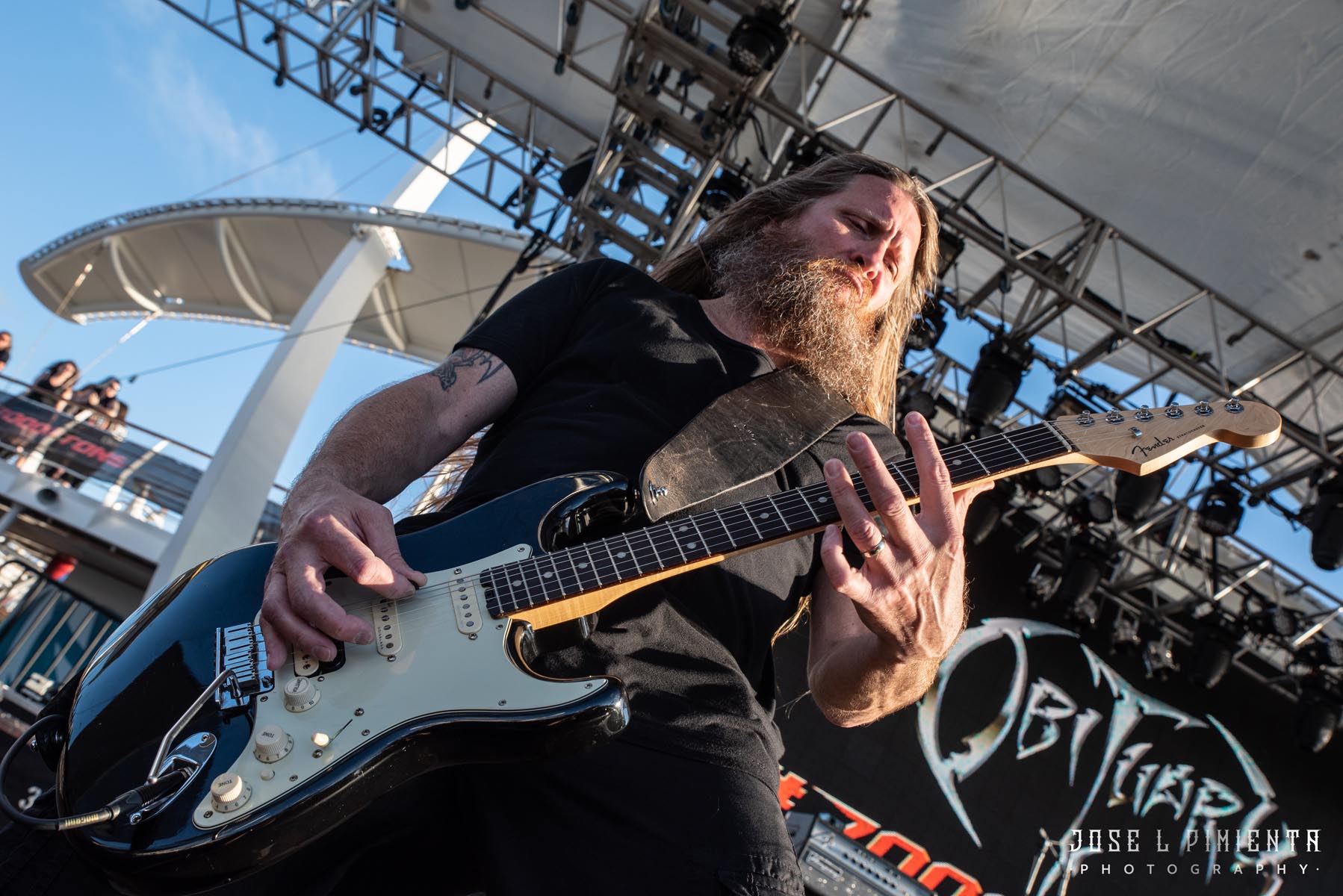 With the same folk-driven heart, neighboring band Ensiferum took the stage with an electric streak of energy to put on one of the most vibrant sets of the cruise. Their encouragement and energy transferred directly to the fans, who spent the set with fists raised in the air, hollering as though they were warriors ready to charge into battle. Exhausted from the sheer demand of both Kalmah and Ensiferum, I took this opportunity to grab one small break before I went out to the performance that I had been looking forward to since the previous year’s announcement.

Night had fallen, and Max and Igor Cavalera were about to play their Return to Roots live for the last time. I can still picture where I was standing, off to the left of the stage, when the first notes of “Roots Bloody Roots” washed over the crowd, sending goosebumps up my arms. The last time that I had seen Sepultura perform was in Cuba back in 2008, but at that time Max was no longer with the band. To see him perform in a band that he had formed, and the clear chemistry between two music-driven brothers, was an opportunity like no other. To call it breathtaking is to do a disservice to the true musical gifts that were bestowed in this bittersweet performance, one which filled the air with cheers that covered any signs of lament. 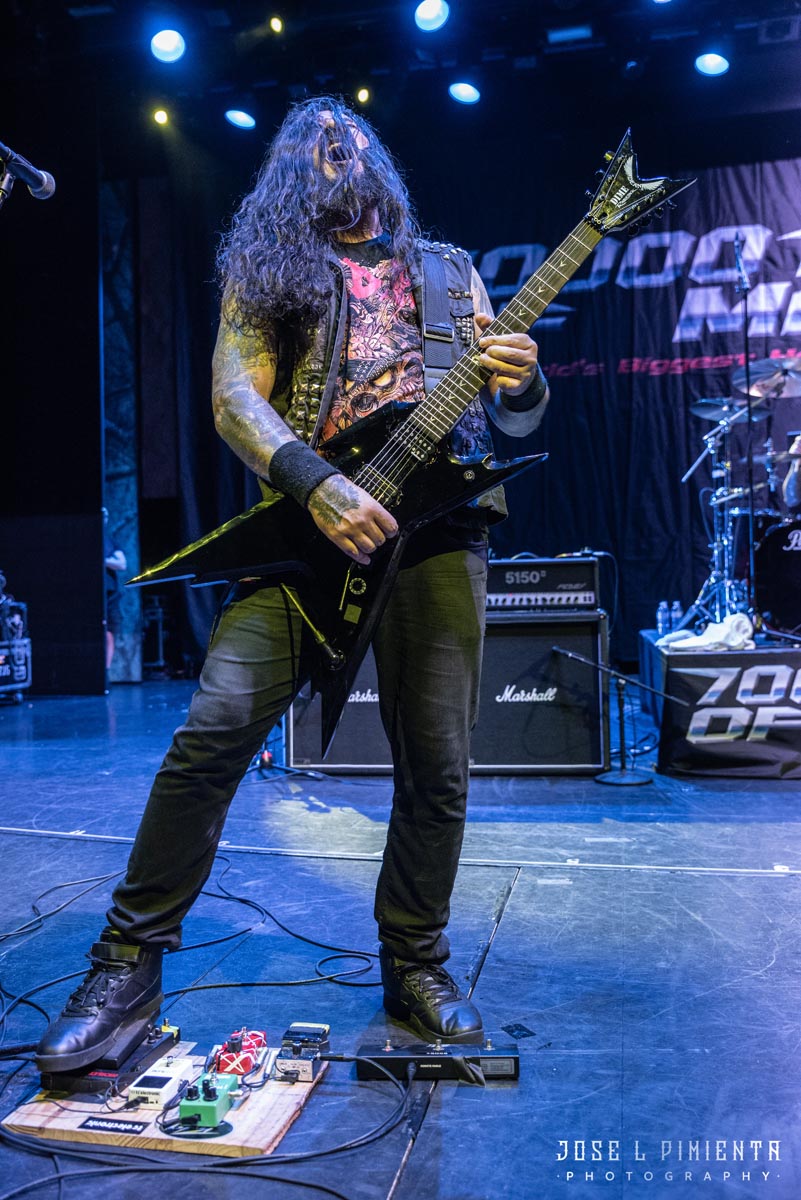 Eluveitie’s second set provided yet another opportunity for the crowd to provide just as much entertainment as the band. What began as crowd surfing quickly turned into a snaking conga line, weaving through the venue, out the back, and then back around again. There were moments where I thought that the band was more amused than the fans, as their smiles and laughter persisted even as they played their most demanding pieces. This was yet another set filled with crowd favorites, where they drove home not just their most punchy hits, but the folk-driven roots that always gave them their most vibrant and true-to-form expression.

Closing the pool deck stage for the evening was Accept, where Mark Tornillo’s voice rose to such heights that it seemed to pierce the winds that roared around us. If there is a band that cannot rightfully be contained by the constraints of a venue, it is Accept, in all of their power and practiced strength. 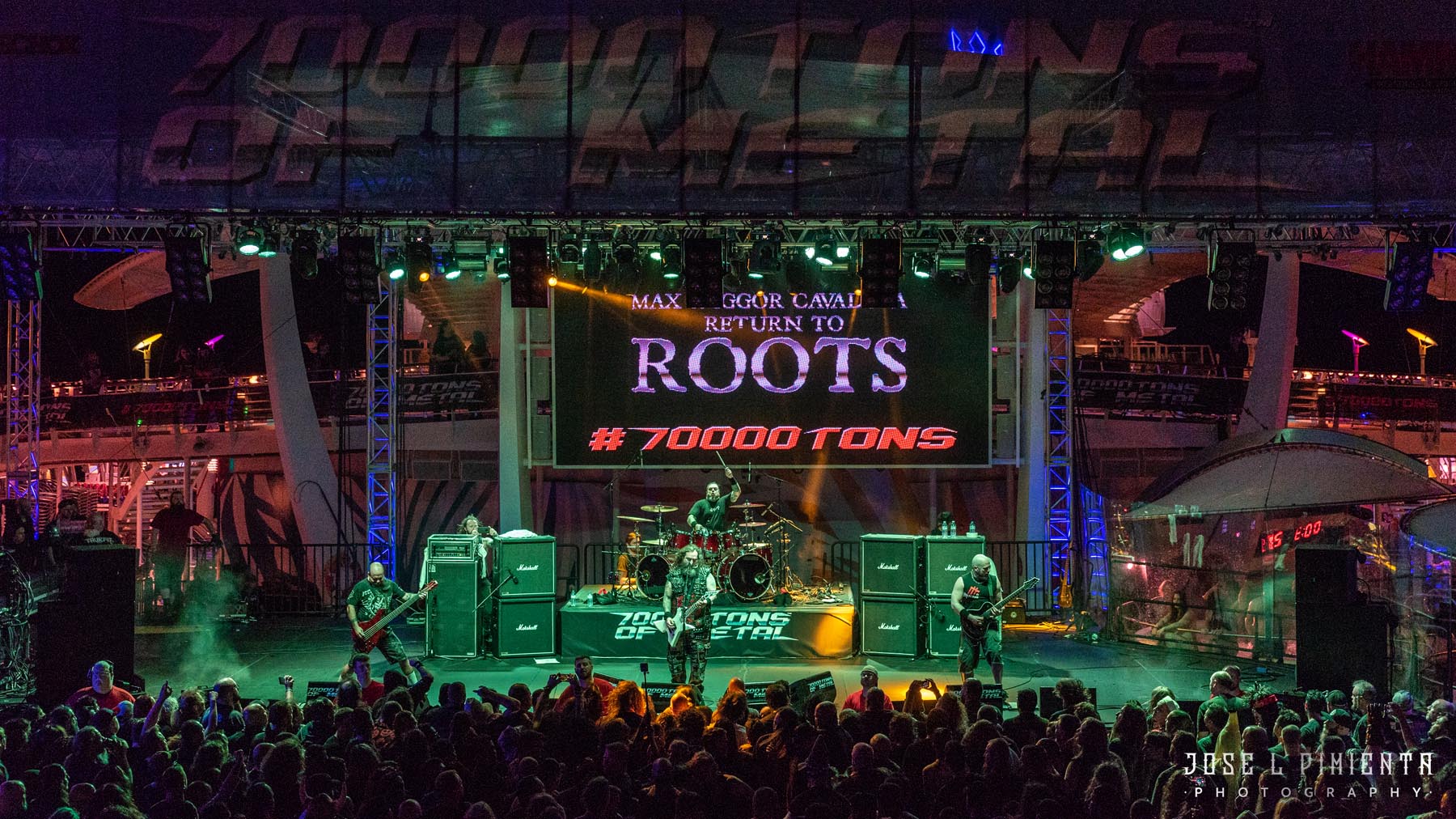 Almost at the end of the set, the “Skipper,” Andy Piller, came on stage to give his thanks to all for yet another successful year at 70000 Tons of Metal. With 3092 guests, 1036 musicians and crew from 73 countires, this year confirmed that this is truly the “United Nations of Metal at Sea.” The announcement that drew the most excitement from all in attendance was news of 2020, the festival’s tenth edition. Here, Piller revealed that the ship will sail towards Cozumel, Mexico, with the festival spanning from January 7th to the 11th. With these dates, it’s certain that metalheads from around the globe will be taking a very long winter break next year. From the cheering, which seemed to never end, I was certain that I would see some of the faces around me again next year.

The year’s last performance came from Fleshgod Apocalypse, taking this closing opportunity to fill the Royal Theater with both exuberance and violence at their fingertips. Between the brutality of their relentless shredding, fans took a softer approach, beginning a mosh pit that soon turned into a pillow fight of unimaginable scale. Heads were banging, pillow were flying, and screams filled the room to the point where it was nearly deafening. But even after Fleshgod Apocalypse took their final bows, it was clear the party had yet to end.

The Solarium was full, where laughter and karaoke carried on until sunrise, friendships kindled and renewed up until the moment the ship docked back at Port Everglades. Many uncertainties may await me in the future, but I know that next January, my heart will take me back to a majestic ship filled with thousands of my closest friends and family. I certainly can’t wait to be back for the next adventure on 70000 Tons of Metal, Round X.

Check out the other days coverage:  Day One, Day Two, and Day Three