As we are walking into the port, getting our passports ready there’s tons of metalheads waiting in line ahead to go through customs and ready to begin their journey on board! For some this is their first time and others they are already the ‘veterans’ of this fantastic metal vacation. For us it’s our 3rd year, I came along with my husband and his best friend. As we enter tons of metalheads were roaring and cheering and just being ecstatic about going into the ship, this of course is normal as many are excited to drink, hang out with friends from overseas and see their favorite bands.

We went to have a lunch break and enjoy the breeze up in the pool deck before the ship sets sail. We later sat at Sorrento’s which is the cruise’s quick stop for pizzas, which is the best for the sailors to have as a snack at 3am when they are tired from seeing the bands all day. During this time, we see a lot of fans dressed in battle gear along with band members such as Gyze, Exciter and Exodus walking around and taking pictures with some of the fans.

Every year they have the mandatory Life Boat Drill, right before the first performance. Standing around us, were a few artists such as Tony Kakko, some of the guys from Psychostick, Chris Bowes with his lovely wife and a few others joining in the drill. Being in a cruise full of metalheads can be a bit humorous as a few of the crew members were giving orders stating ‘please move to the wall’ of course many of the fans made this into a ‘wall of death’ reference and were chanting for it. The crew members were puzzled and shouted “We don’t know what that means!” This of course made a lot of us laugh. One of the best things about being in this cruise is that you could be completely silly and united. 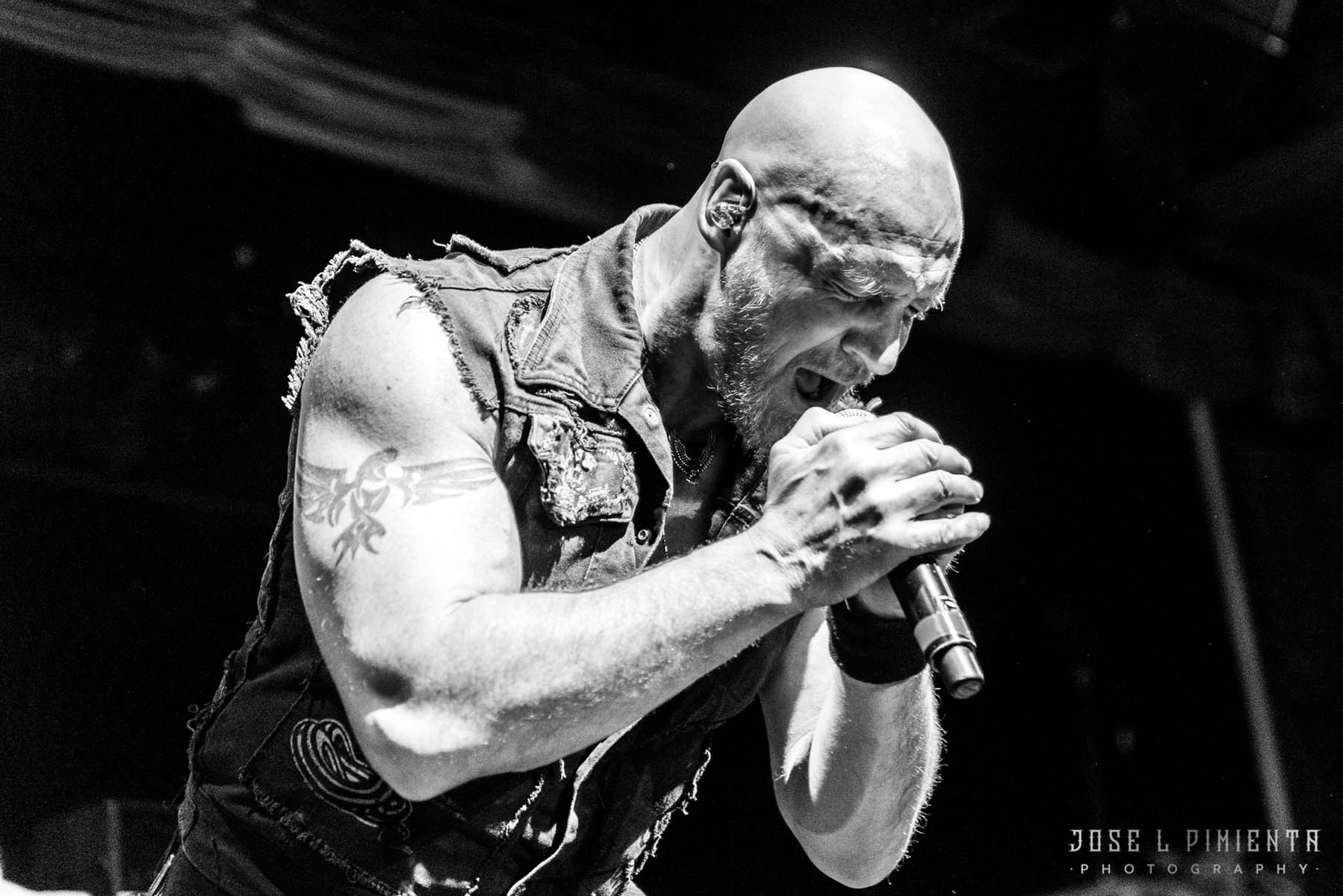 The first band to play on Day 1 was Primal Fear at Studio B and Exhumed at the Pyramid Lounge. The ship began sailing when the first two bands kicked off. These are always the hard decisions to make, and that’s choosing which bands to see while both are playing at the same time. Unfortunately, we don’t have the super power of teleporting from one place to another; it would be cool though! Both venues are opposite sides to each other from the ship. I chose to see Primal Fear, their energy and stage presence welcomed the fans as a great way to start this fun and restless vacation! They performed “The End is Near” that was more than enough to get the audience pumped packed with tons of head banging and good times.

Next band to perform was Leaves’ Eyes in the Alhambra Theater, unfortunately I am set on my ways and have this stubborn attitude towards the departure of Liv Kristine, I loved Leaves’ Eyes and definitely grew up with the music, but if it’s not Liv then it’s not Leaves’ Eyes anymore for me. I sneaked in, saw half of the first song quickly and left with disappointment.

On the schedule was Destruction (Studio B) and Triosphere (Pyramid Lounge). However, Triosphere had to reschedule for the next day at 12pm due to the singer having medical issues. I definitely wanted to catch Triosphere performance so I made sure to write it down to catch them the next day. Swallow the Sun was performing in the Alhambra Theater, I decided to take a seat, relax and watch their performance. As a ‘doom’ genre lover I enjoyed their set, it definitely put me at ease and relaxed me as I sat watching their set being beautifully performed. The cool thing about this band is that they brought extra musicians to perform in a small orchestra for their set. 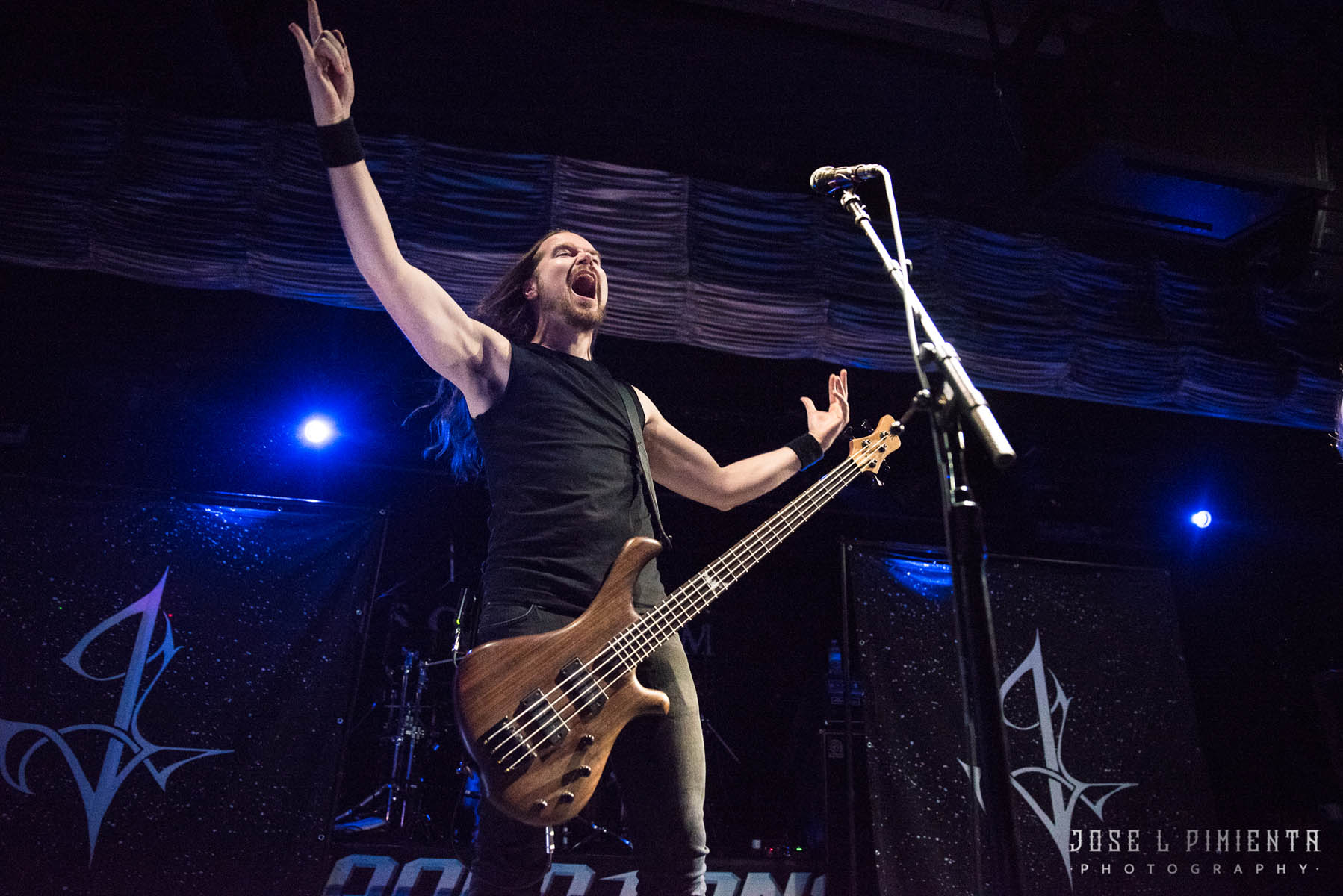 Another band I was excited to see next was Insomnium, one of my personal favorites. They also performed in the 70000 Tons in 2016, sadly I had to miss them as their schedule for that year were between 3am-4am and their other time being 5am with the sunrise. As much as I loved them I needed to catch up on some sleep. The first song they opened up with was “While We  Sleep” followed by songs from their “Winter’s Gate” album, and of course some of their classic songs. They ended their set with a nice treat and surprise for the crowd, Mikael Stanne of Dark Tranquility joined and performed in their last song “Weather the Storm” as a featured guest vocalist. He brought great energy with him and made the crowd ecstatic. This was a perfect ending to Insomnium’s first set.

Italian power metal legends, Rhapsody were performing in the Alhambra theater. Since this was part of their 20th Anniversary farewell tour it was a great opportunity to watch their performance for one last time, especially with Luca Turilli on guitar. Some of the tunes they played were “Dawn of Victory”, “Wisdom of the Kings”and “Holy Thunderforce” which got the crowd forming a circle pit. They ended their set with the classic ‘Emerald Sword’ and some of the fans had lighted up swords and were waving it while being in the pit singing along as if they were in an epic battle.

I was only able to catch a few glimpse from Estonia’s Metsatöll since it’s a little difficult to watch performances in the Pyramid Lounge if you get there too late you will have a crowd in front of you that blocks the band (since it’s not really a stage, but more of a bar lounge) I decided to catch them in their second set in Day 4. Enslaved were next at Studio B, they had great stage presence but sometimes Studio B and Pyramid Lounge have problems with the sound which makes it difficult to watch a performance. The best sound quality are definitely The Alhambra Theater and the Pool Deck stages.

Around this time it was about 11:30 PM, I decided to change my clothes, wear sleep slippers and take a short break and grab some food in the Windjammer. One of the best feelings about being in a cruise during a music festival is that you could always go to your cabin, take a power nap, brush your teeth, shower and continue feeling refreshed to see the rest of the bands or just take small breaks in between with a cozy feeling as if you were right at home. This has definitely become a routine for me each time I’m at 70000 tons. I was able to catch the brutal performances of German thrash titans, Kreator in the Alhambra Theater performing some of their classics along with songs from their latest album ‘Gods of Violence.’ After them I was able to catch German folk band, In Extremo performing with their bagpipes made the audience have a good mood even if it was already 2:00am.

In Day 1 a lot of the bands had a delay, all the bands were performing an hour later from their actual time which extended the day more. Around 3:40 am I passed by Sorrento’s to grab a slice of pizza to power up and keep going. After that, I was waiting in the Alhambra Theater to catch Amberian Dawn, I have never seen them live and I personally have never seen them tour the US, so this was an incredible opportunity. I was already tired but with a cup of coffee in my hand it was completely worth it. They performed songs like “Valkyries”, “Cherish My Memory”,  and “I’m the One”. One of their songs “Magic Forest” was inspired by the movie Hansel and Gretel stated by their singer Capri, which was one of her first songs that she wrote for the band when she joined. I may add, I was admiring Capri’s stage outfit as well! All in all it was a great first day, but the later days would become even more memorable.

Check out the other days coverage:  Day Two, Day Three, and Day Four