The machine will never be satiated.

Any artist that opts to buck an existing trend will tend to do so out of individual initiative, as any movement will rarely begin with a comprehensive manifesto of intent. In the case of the now popular subset of metal music known as the New Wave Of Traditional Heavy Metal, many choose to name Sweden’s old school metal purveyors Wolf as its earliest progenitor. Born in the midst of the 1990s when their adopted style was considered the most unfashionable one under the sun, early interviews reveal a band that was out there to make the music that they wanted to make, being more indifferent to the post-grunge and nu-metal fads that were all the rage on the western side of the Atlantic than either hostile or amenable to them. Whether they intended it or not, their seminal studio work and commitment to getting the job done on the road, concurrent with the rise of the Gothenburg, Euro-power and black metal movements, became a consequential part of metal’s millennial renaissance.

The formula at play in this band’s sound is arguably the most fitting of one initiating a new scene, whether intentional or not, as the mixture of influences is both historically specific yet also quite general in scope. Obligatory influences including the likes of Iron Maiden and Judas Priest during the early to mid-80s intermingle with the darker, more menacing yet still melodic end of the NWOBHM as exemplified in the likes of Satan, Hell and Cloven Hoof, and also the theatricality of Scandinavian heavy metal icons Mercyful Fate to manufacture a sound that is both hard-hitting and technically apt. The key element that brings all of these moving parts together is vocalist/guitarist Niklas Stalvind, who’s nimble and haunting howls could be likened to a perfect amalgam of Crimson Glory’s former impresario Midnight and Lizzy Borden. Through presiding over a revolving door of band mates that involved changing out the entire rhythm section just a year prior, his is a well-oiled machine that continues to deliver a consistent performance even after 25 years of blazing sonic trails.

Some may have been distraught at the extended period of studio silence following 2014’s “Devil Seed”, but Wolf’s latest outing in “Feeding The Machine” leaves little doubt that these old school revivalists are far from laying down their arms. Wailing away like a series of air-raid sirens, the opening guitar sounds of “Shoot To Kill” pave the way for a swift, riff-happy anthem of rebellion that conjures up the early USPM sounds of 1986, yet is polished and massive enough to trade blows with the latest Primal Fear album. Similar fits of heavy-ended fanfare that merges the simplicity of the good old days when denim and leather were the order of the day with a modern production gloss include the punchy cruiser “Midnight Hour” and the speed metal-infused nod to Judas Priest “Devil In The Flash”, each fitting in as well with modern strains of heavy metal as with the retro sound exemplified in younger acts like White Wizzard, Skullfist and Riot City. 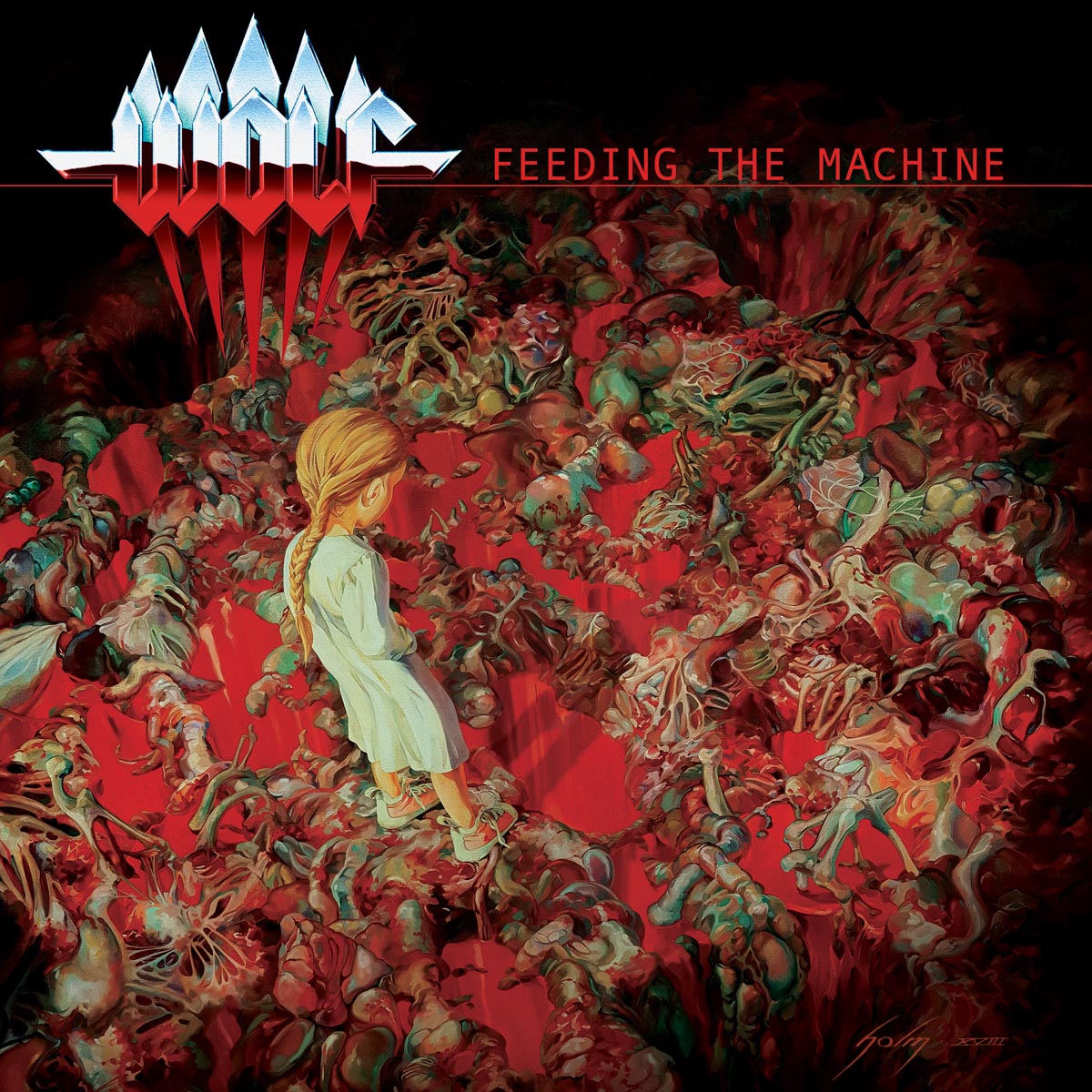 Although the fast and furious offerings of this album are sure to be the prime draws for most of the metal faithful, this is a band that also knows how to mix things up and reach a bit further back into the style’s formative period. Though about as quick as the previously mentioned cookers, “Spoon Bender” exhibits a bit more of a mystical character that’s a bit more in line with the Eastern musical influences typified in some of Rainbow and Dio’s more experimental offerings. The gallop-happy and thudding crusher of a title anthem “Feeding The Machine” has a similarly off-kilter melodic character to it, though in more of a harrowing sense that dovetails with the mystique of early Mercyful Fate. But the most auspicious of quirky left-turns into more musically nuanced territory is the almost jazzy, up-tempo slayer “Black Widow”, which again conjures up comparisons to King Diamond’s original band, combined with a bit more of a driving, USPM feel that isn’t far from Helstar or Omen territory.

To say that the sizable collection of fans that this outfit has accrued over the past couple decades will be well satisfied with this album would be an understatement. Rather than hitting an expected speed bump upon taking on a new bassist and drummer, Wolf has returned stronger than where they left things six years ago, offering up a higher impact musical affair that is sure to have a healthy degree of crossover appeal in German speed/power metal circles as well as the smaller remnant of  fans who remember the good old days when Queensrÿche was playing actual metal with Geoff Tate at the helm and Fates Warning wasn’t trading stylistic blows with Dream Theater. The formula is naturally a bit more streamlined than what those bands were dabbling with in the mid-80s, consisting mostly of three to four minute songs with standard structures, but no expense is spared in the aggression department and the assortment of hooks and grooves interwoven into the old school heavy metal tropes have no shortage of staying power.

Though an ever-evolving art form, metal’s primordial roots are no less impressive than its many offshoots, and one the earliest revival acts that spawned the New Wave of Traditional Heavy Metal continues to show every latecomer how it’s done