How weird is this?  Two of the best progressive-rock albums of 2019 come out of Norway.  Both bands have the initials “MP.”  Both are powerful, a bit quirky, and full of enough hooks to jerk you out of your lethargic state.

Magic Pie’s Fragments of the Fifth Element is one of those (see our earlier review).  The other is A Boat on the Sea by Moron Police.  And it’s a rare album, one that makes you play air guitar or keyboards while grinning stupidly in blissful joy.

The band, the music, the arrangements, the guitar, the singing, heck, the whole shooting match is the brainchild of Moron Police Chief Sondre Skollevoll.  Or is he Moron Chief of Police?  Whatever.  This is his stuff, and it is magnificent.

And it’s different—a big change from the previous two albums, 2012’s The Propaganda Machine and Defenders of the Small Yard, which came out in 2014.  Back in those days—when he was but a wee lad—Skollevoll put the guitars out front in a quasi-metal fashion.  His was a Mr. Bungle/Faith No More sound.  And the words?  Well, try out some of these titles: “T-Bag Your Grandma.”  “Steve Jobs Is Dead, But I’m Not.”  “Stomp the Goomba.”  “Who’s That Chicken?”  And lyrics that the writer admits were just a tad obscure.

And during gigs, Skollevoll often wore a kilt.  Commando style.  Probably an interesting experience for the folks in the front row.

But time passes and people change.  Sondre Skollevoll  has reached the advanced age of 30 and mellowed (okay, at least he did away with the kilt).  A new direction was called for.  A little less guitar.  More keyboards (featuring the stylings of new member Lars Bjorknes). Melodies that were catchy if quirky.  And production that made each song a bit of an epic. It took five years to get there, but they finally arrived at the scene of the crime with A Boat on the Sea.

The melodies are prog-rock and pop and rock and a variety of other things.  They’re contagious and catchy. The song titles are less…ahem…earthy.  The lyrics are more straightforward than on the previous two releases.  Let’s call them topical, since writer Skollevoll avoids terms like “protest” or “political” or “angry.”  Maybe it’s okay to say that he’s concerned and aware of what’s going on in the world.

“Hocus Pocus” is based on Kurt Vonnegut’s book of the same name with a satirical look at American life in the post-Vietnam era.  It is a piano driven ballad that lasts just 1:20. And then “The Phantom Below” blasts out of the speakers.  It is based on another tome that considers the impact of digitization on our lives. This is rock and video game music, combined in a toe-tapper that features a nice sax break.

That segues into “The Invisible King,” which may or may not be about God and war and power and money.  Oh, there are a lot of religious references in A Boat on the Sea.  Sondre Skollevoll is certainly cynical about organized religion (who isn’t?) but doesn’t necessarily deny the existence of a Supreme Being—but he does have a lot of questions for Him to answer.  This is the most flat-out rocker on the album, a real burner that melds into…

“Beware the Blue Skies,” which is about a little-known topic: Norway is a huge producer of military drones for the U.S.  The song pokes holes in the Norwegian image to reveal a bit of hypocrisy.

“And hip-hooray here comes Norway, friend to one and all
We don’t sell guns, we just provide a little service, that’s all
We’re the ambassadors of peace and kindness
Merely warlords dealing death and violence in a cabaret
We’re good friends with the U.S.A.”

This one, too, rocks—until three minutes in, when it slides gently into a softer section featuring an accordion solo.  Somehow, I doubt Skollevoll would have tried this five years ago.  But it works in this context. “The Undersea” is about living life as it is without worrying about what comes next.  And “Isn’t It Easy!” ties together several of the thoughts in the previous songs, and closes the loop (musically and lyrically) with the album opener, “Hocus Pocus.”

And if that ain’t Prog, then what is? 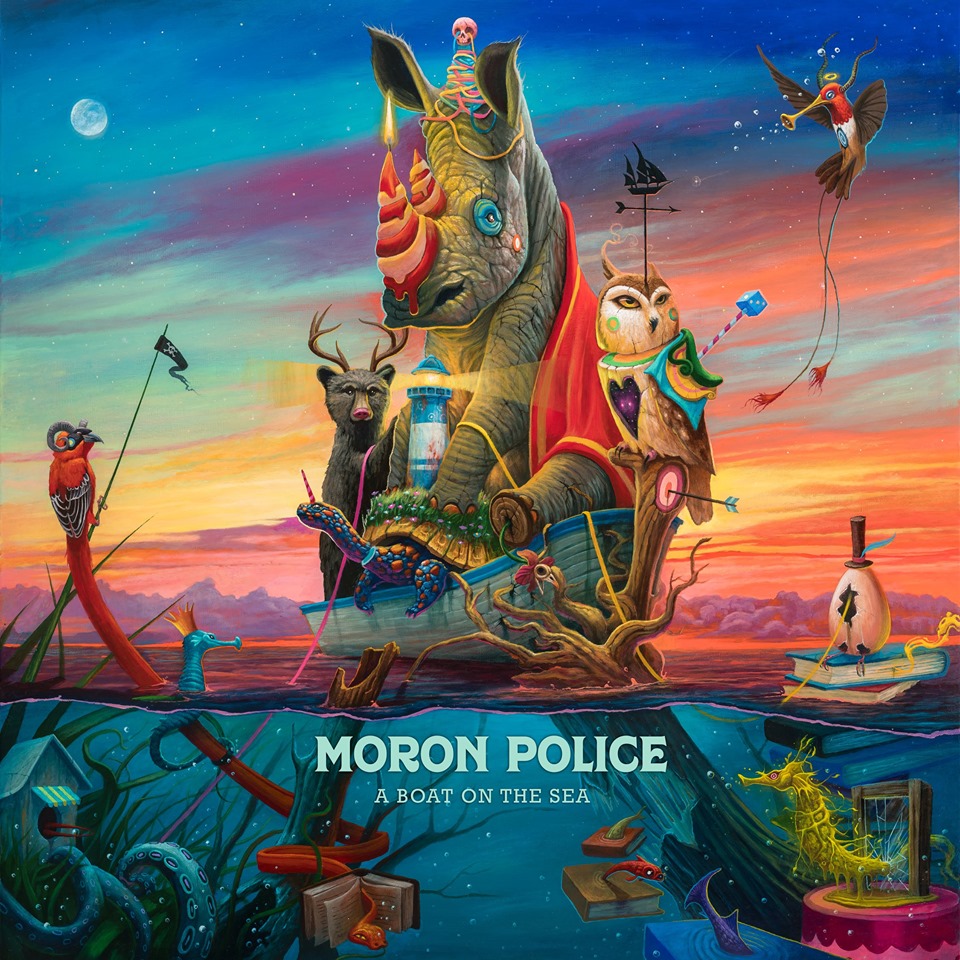 “A Boat In The Sea” Album Artwork

That’s not to say that this endeavor is all serious and straitlaced.  “The Dog Song” is about—well, what else—the Skollevoll family dog back in the day.  It is full of whimsy and is joyful like a puppy.  And “Captain Awkward” — a personal favorite — is about…well, who knows exactly what it’s about?  But the words sound good with the notes and really showcase singer Skollevoll’s abilities. It jumps from ballad to rock to klezmer to video game and a lot of other stuff. It’s a bit of stuff and nonsense that will have you humming along (see the review of the video).

A tip of the hat, by the way, goes to drummer Thore Omland Pettersen and bassist Christian Fredrick Steen.  It takes real talent to keep up with all the musical changes on this album, but they do so, admirably.  They also flash the power and chops of the metal days of Moron Police.  Powerful, driving, engaging.

The sound of A Boat on the Sea is big, full, bold and clean.  Skollevoll and keyboardist Lars Bjorkness manned the recording and engineering.  And Mike Watts, who has handled several of The Dear Hunter albums, mixed this one with his usual smooth touch.

All in all, this one is from out of left field.  Moron Police isn’t as big a name as their Norwegian compatriots Magic Pie.  They’re not as prolific; they don’t do as many live gigs.  But A Boat on the Sea is a real delight, an offering that showcases top talent in under 35 minutes, leaving one begging for more.  This boat cuts through the rock ‘n’ roll waves and provides a journey that is enjoyable from departure to arrival.

Sondre Skollevoll’s mind and music’s been goin’ through them changes.  And we’re the beneficiaries.  Beware, the Moron Police are on your tail and they’re going to take your ears into custody. All aboard A Boat on the Sea.

“A Boat on the Sea” Track-list:

The third album by Moron Police is a delightful mix of strong melodies, captivating rhythms and topical lyrics that take this band in a new and intriguing direction