Peggy and Billie Harris had been married just six weeks when he was called to the WWII front in the summer of 1944.  That was an all-too-common story.  And then Billie’s plane went down in Normandy, France, in July of that year—about six weeks after the D-Day invasion.  Peggy waited for word on her husband.  And waited.  And waited.  It took more than 60 years for her to determine exactly what happened to Billie.

It’s a remarkable tale.  And it’s one uncovered by Dutch band Knight Area for their new release, D-Day, a tribute to those people who sacrificed so much on June 6, 1944 and afterward to ensure a new burst of freedom in the world.

I know, I know—what’s a group from the Netherlands doing releasing a concept album about this important event? The U.S., British and Canadians led the invasion.  There were no Dutch forces involved. But we Americans don’t realize the impact of D-Day in various parts of Europe.  It was when the Nazi occupation began to crumble, and oppressed peoples enjoyed renewed hopes that liberation was on the way.  And that included the citizens of the Netherlands.

Several members of Knight Area had previously visited Normandy.  Last year, they took bassist Peter Vink there for his birthday.  And they were gripped by the idea of doing an album about D-Day, something that would honor the event and the people.  And with the 75th anniversary of the invasion approaching, the time seemed right.

Except for one thing.  Vocalist/lyricist Mark Smit wasn’t all in on the project (his residence in the south of France just made things more difficult).  After a couple of songs were written and laid down, the rest of the band made a decision.  Smit was out.  Jan Willem Ketelaers, a well-known Dutch performer who’d sung with Ayreon in the past, was in.  That’s not as simple as it sounds.  Ketelaers had to get up to speed on D-Day, determine how to approach things in songs and then write the words.  And in just a few months, to meet the June 6 deadline.

That’s not to mention working on the music, going through recording sessions, crafting extensive liner notes and designs, etc.

The result of those efforts is out (as of September 20).  And frankly, they are impressive.  D-Day brings down the thunder without losing the humanity of those people who gave so much.

One caveat: for those who are fans of previous Knight Area productions, this one is different.  Keyboardist Gerben Klazinga, the band founder, is less prominent.  The orchestral sounds he produced are very limited.  That puts a greater premium on the work of Mark Bogert, the wonderful guitarist who leads the attack—but in a tasteful fashion.  Never does he allow “shredding” to get in the way of telling the tale, either musically or lyrically. But this is more of a guitar album than previous records. And, of course, Ketelaers is a different vocalist than Mark Smit.  The new guy has a remarkable range, in notes and emotions.  His personality shines through and seems to be an absolute natural for this project. 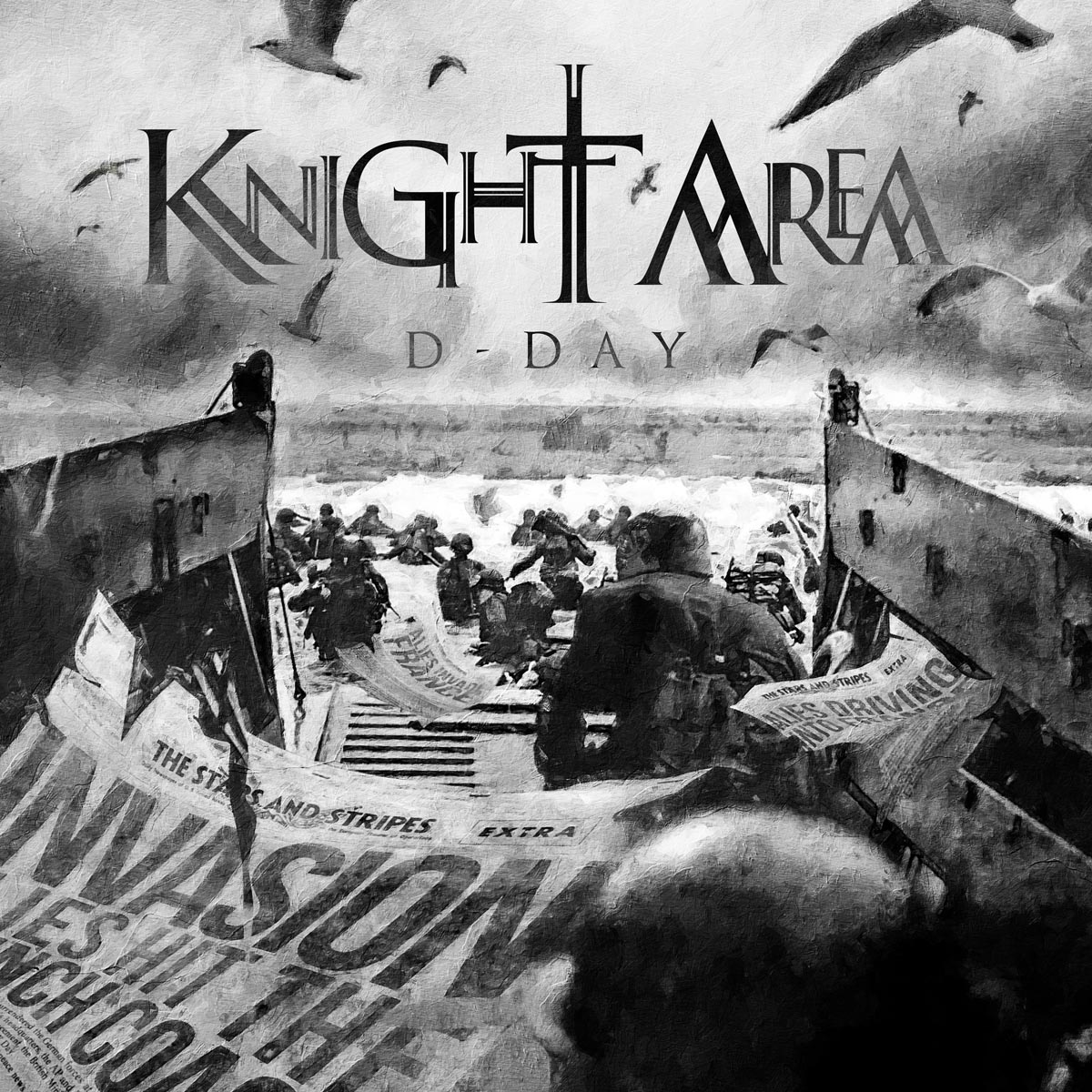 So let’s do a quick rundown of the music.

Things kick off with “New Horizon.”  The voice of Allied Commander Dwight D. Eisenhower booms out, encouraging the troops as they embark on “The Great Crusade.”  The swirl of strings provides a foundation to his words, reminiscent of old newsreels from that time.  That transitions into military drums, chorus and organ before the roar of symphonic metal grabs you by the throat.  The song is from the perspective of a soldier gazing upon the beach, ready to charge ahead into hell.

“Overlord” is a reference to the code name for D-Day, Operation Overlord.  This one is a harder-edged song, more urgent, reflecting the start of fighting that day.  It was tough, dangerous work with the world’s future in the balance.

“Blood on the Risers” is the album single (and video—see our review).  The title comes from an old song of the same name—about paratroopers, sitting ducks as they float down to the beach.  This one starts with an ominous yet pastoral sound of oboe and strings—and then shifts hard into Bogert’s guitars and Ketelaer’s voice.  Bassist Peter Vink—born just five years after the invasion—provides an extremely powerful foundation.  So does drummer Pieter van Hoorn, a veteran who did 12 years in the Dutch army (well after WWII, of course).  At the end of the piece, we hear a snippet of the original “Blood on the Risers”: “Gory, gory what a helluva way to die” (to the tune of “Battle Hymn of the Republic”).

“The Landing” is about just that.  It starts off a something of a children’s song, with Klazinga’s keyboards accompanying Bogert’s plaintive guitar and Ketelaer’s voice before kicking off into a harder rock approach—but one that, musically has references to the previous song.  This one is a reminder: some 425,000 people were killed, wounded or missing in action at Normandy.  The price was high.

“Omaha Beach” starts much like “The Landing,” quiet and contemplative before the instruments rush in. It’s a rock ballad, but about men with glassy eyes and hollow faces from all the death and carnage they’ve seen and experienced.  The beach was the scene of some of the most violent fighting—and it left its mark on all who were there.  This is a song where Ketelaers shows a full range, from low growl to keening wail, to examine the souls of the brave men at Omaha Beach.  Air raid sirens scream at the end.

“Remembrance” begins with Klazinga’s piano before the rest of the band jumps in, feet first.  It chronicles a little-remembered part of the invasion, when a group of U.S. paratroopers were sent on a virtual suicide mission.  There is urgency, anger, panic in the music and lyrics.  Men face death with many emotions, some overlapping each other.  And yet, in this case, they put duty and honor ahead of life itself.

Then comes that song for Peggy and Billie Harris, “When I’ll Be With You.”  Guest pianist Robby Valentine accompanies Ketelaers—who found this story on a Google search and knew he had to write about it.  It’s a gut-wrenching song of love lost but the promise of reunion and reconciliation…sometime, someplace.  By the way, Peggy Harris still lives in small town Texas.  And Billie is buried in Normandy, near a town that has honored his memory and heroics for 75 years.  Check out the full tale online, and be moved.

After D-Day, the Allies began the inexorable march to victory with a protracted offensive toward Berlin.  “Wings of Time” reminds that D-Day was the start of the end; it was not the end.  Almost operatic in its sound, this song includes a section of the 23rd Psalm—“The Lord is my shepherd, I shall not want…”  As the saying goes, there are no atheists in the foxholes.

“March to Victory” starts with British Prime Minister Winston Churchill’s victory speech on May 8, 1945.  Again, the swirl of strings undergird his words on “V-E Day.”  Again, the band then explodes on the scene, a powerful rocker about the price of victory.  This one is dedicated to the warriors who suffer from PTSD—not just of WWII, but all conflicts.

The album wraps with “Freedom for Everyone.”  It’s a celebration of the freedom won by the people who fought at D-Day—but a warning that such freedom is always in danger in a world of chaos and violence.  And it’s a reminder that there is always a cost to protect freedom. Like other songs on the album, this starts a bit quietly, with keyboards and guitars and vocals, then picks up in a wave of instrumentation.  This, too, is a ballad of sorts, elegiac, slower, deliberate, evocative. Sections harken back to previous pieces.  It is a fitting conclusion.

By the way, this is a band with a sense of history as it applies to today.  Their video for “Blood on the Risers” came out on June 6, the 75th anniversary of D-Day.  And the album release is on September 20.  Seventy-five years before, Allied forces were in the middle of Operation Market Garden, the attempted liberation of the Netherlands with an aim to create a quick path to Germany.  Ultimately, that effort failed and the Dutch people suffered almost a year of terrible privations.  But they still remember mid-September 1944—as does Knight Area with the release of this album.

Now, an admission, a confession.  I’m a professional historian (among other things), although my area is the American Old West.  But I’m attracted by projects of history—and D-Day is that, in spades.  Not just in the music, but the liner notes, written by Jan Willem Ketelaers, are very well done and give even greater depth to this album.  And his lyrics are great as well.  The other guys in Knight Area did well when they hired him.

This is not your father’s Knight Area, the one founded by Gerban Klazinga more than 15 years ago.  At various points, it’s been progressive-rock.  Or symphonic prog-rock.  Or symphonic.  Or whatever.  It has taken on different shades and shapes over time, as the band and its members have changed and evolved.  D-Day is the most metal album they’ve done, but it fits.  This project is about war, and war isn’t silky smooth.  And yet there are swirls of calm in the insanity, and those, too, fit.

The seventh studio album by Knight Area is a sober, respectful yet powerful tribute to one of the 20th centuries biggest events, employing a strong guitar sound and thoughtful lyrics to carry this band and its works to new heights