Americans all too often view history—including international events—through blinders.  If we weren’t involved, it didn’t exist.  If we were involved, well, anybody else matters little.  Take it from me, an American historian.

That certainly applied to the recent celebration marking the 75th anniversary of D-Day.  Okay, all the action happened on the beaches of Normandy (that’s France, for the geographically challenged).  But the focus was all about US forces, grabbing footholds in Europe via air, water and land.  Approximately 2500 of those troops died, which is why we honored them and their sacrifice on June 6.  There’s just one little problem: some 2000 Canadians and British also gave their lives that day.  Lest we forget…

Another thing.  Many Europeans also celebrate D-Day.  It was the major step toward liberating people who’d been subjugated, in some cases, for more than six years.  Freedom was on the way, returning to lands and people who had been stomped by the boot of Naziism.

The members of the Dutch band Knight Area are all too aware of that.  No, they weren’t alive back then, but members of their families were.  They were raised with the idea that June 6, 1944 was a special day, that Normandy was holy ground.  Four of them visited the site on various occasions, and it made an impact.

So in 2018, the band members were considering options.  They were looking at a change in sound, something away from the symphonic prog that was a hallmark of their six albums.  Something more hard rock (without losing the flourishes, the epic nature of the music and lyrics).  And they decided to herald the new approach with a concept album—about D-Day. Part of the change required a new lead singer and lyricist.  Longtime frontman Marc Smit was out.  And Jan Willem Ketelaers, a well-known Dutch singer, came aboard. 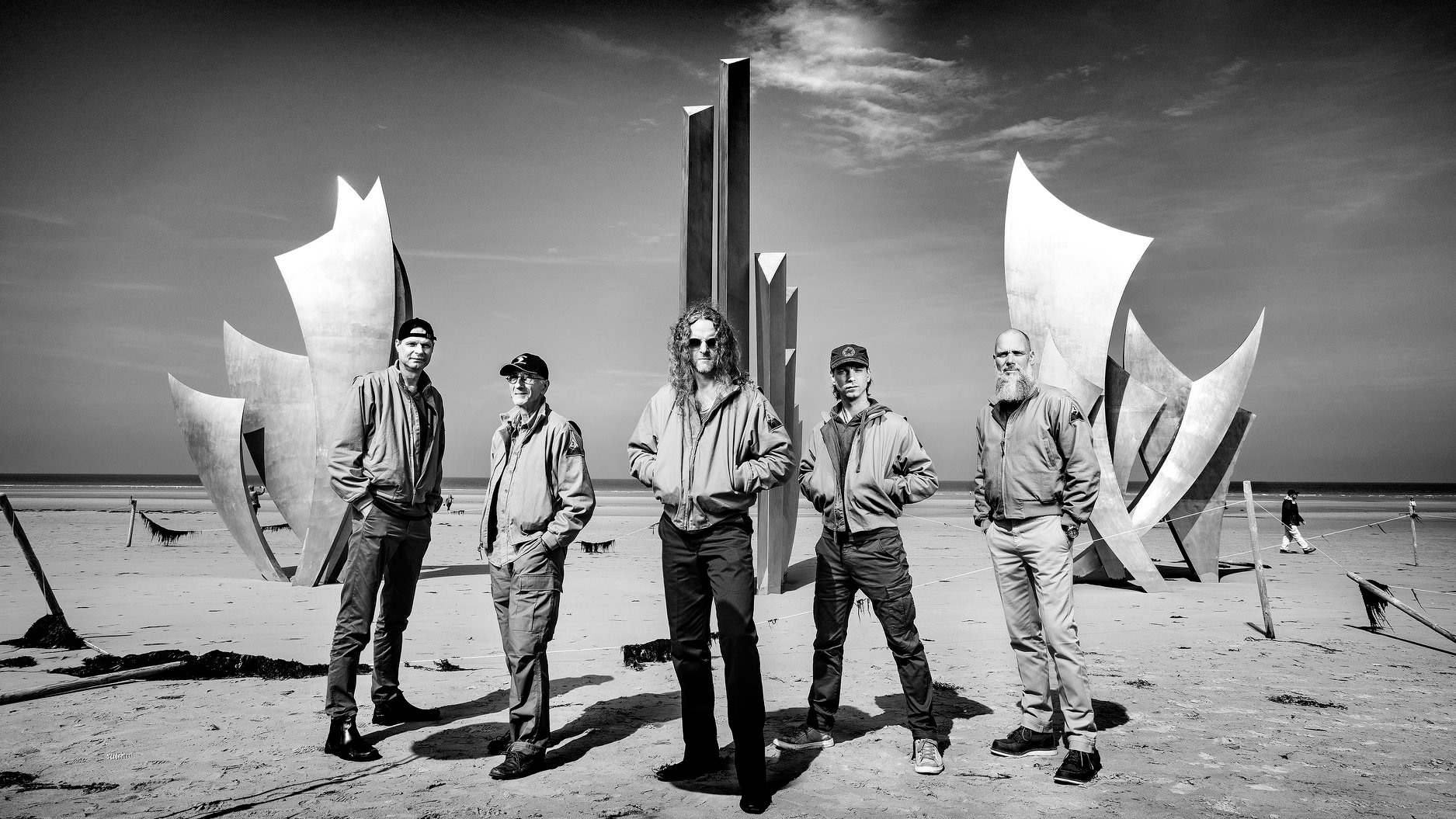 It could have been daunting—walking into a concept album project that all the other guys had a passion for.  But Jan Willem jumped in enthusiastically, even writing the lyrics for the first single, “Blood on the Risers.”  Risers, by the way, are a part of parachute rigging.  Many soldiers who jumped from planes and gliders were shot on the way down, or just as soon as they hit the beach.  And the title has its own meaning.  There’s an old military song with that same name, a fatalistic look at what it means to be a jumper.  Ketelaers was adding yet another tribute by repeating the title.

The single, naturally, became the first video.  Which was released on D-Day, of course. And it’s an impressive production—especially considering that some of the shoots were still being done a week before the debut.

The video starts with the five men on the beach, picking up relics from the invasion, pondering what took place there.  As the music kicks in, the group becomes part of that time (and they go from color to black and white), watching as the landing craft come out of the water, as soldiers jump from planes, and the action gets heavy.

Thousands of heroes in the sky above the sea
Floating away to give their lives for victory
In the darkness of the night, June 44
To die for peace in an everlasting war

Interspersed with those shots—the guys in the band, performing, individually and collectively.  Drummer Pieter van Hoorn (who is a Dutch army vet).  Keyboardist and Knight Area founder Gerben Klazinga.  Peter Vink, the bassist who was born just five years after D-Day. Guitar virtuoso Mark Bogert.  And singer Ketelaers, walking a pier along the water as he paints the lyrical picture.

One of the vintage shots is of a bunker, where a number of US officers and men are gathered, going over maps and plans.  A quick cut shows that same bunker in 2019, little changed, with Bogerts creating a tasteful guitar solo for the break.  No shredding here (although he has proven time and again he can do that as well).  Something respectful, emotional, plaintive—that’s what’s called for, and that’s what’s delivered.

That’s the tenor of this song, this video: respectful, even reverent.  Knight Area walk through the cemetery and monuments at Normandy Beach, places that honor the dead, the wounded, the people who gave so much.  There’s no mugging, no “rock hero poses.”  It comes across as honest.

And the video evolves, showing Paris as the Allied Forces enter the city.  A map highlights the path of the troops as they go beyond Paris, to Belgium and the Netherlands and into Germany.  Victory, but at a high cost.

And the video ends as the band walks away, down the beach…Bogerts dragging his guitar behind him in the sand.

The rest of the album—and maybe another video or so?—comes out in September, to mark the 75th anniversary of Operation Market Garden, an attempt to replicate D-Day in the Netherlands that ultimately failed.  There’s more to that story, of course, but perhaps that should wait for another album

For now, check out “Blood on the Risers.”  It is good, anthemic rock performed by guys who know what they’re doing.  But it’s also the opening pages of a history lesson.  One that Knight Area is happy to teach to its audience.  Including in America.