For a band to strike truly genre-transcendent acclaim, they must have some combination of technical skill, universal appeal, and an inescapable, magnetic allure. This is a feat made even more impressive for bands borne from the tight-knit circles of metal music, where the sounds of thundering drums and distorted strings are frequently tucked out of sight from a broader, often curious audience. Of all the bands that have leaped from the confines that named their genre with almost dutiful grace, almost none have flown as freely nor been as definitive over time as have Apocalyptica.

They began buried deep in the unknown with their novel premise, an uncertain reception awaiting the deep strings that filled out the heavy body of “Plays Metallica by Four Cellos” in 1996. Little did anyone suspect that what began as a humble cover band comprised of classically trained cellists would grow wings and soar to one of the most beloved names in not just metal, but would one day evoke images of what classical music may be in the modern era. But it is from those humble roots of daring fortitude that Apocalyptica was born, four cellos, not a whisper to take away from their carefully calculated delivery. As the band marched on and grew bolder, their covers were replaced with original songs, gradually adding in percussion, a rotation of guest vocalists, and finally a more permanent vocal installment.

Though Apocalyptica seems to have grown stylistically with each new album, upcoming opus “Cell-0” is an evolution that also proceeds on a breathtakingly deep dive back to their roots. Seizing the instrumental mystique that made their original work so accessible while embracing the wisdom of nearly two decades of experience, Apocalyptica has created a gem that is not just full of beauty, but brimming with unspeakable emotion that needs no words to guide its story.

To call “Cell-0” another installment of symphonic metal would be incredibly remiss, and would miss the essence of what Apocalyptica has created. They are often advertised as ‘cello metal,’ and lacking any other bands in their category at such a caliber, such a straightforward moniker is perhaps the most appropriate. It is the enthralling arrangement of cellos on which Apocalyptica was built, and it is with those cellos same that the band seizes attention once again in an album that is full of triumph, terror, melancholy, and enchantment. This is a gem which shows the untapped power of brilliantly composed classical music, the high-octane bite of metal, and complete control over complex musical arrangement.

The opening notes of “Ashes of the Modern World” are deep and haunting, running as cold as a bitter wind in the dead of winter as cellos begin to pull the listener in. It is a hook founded in the subtle play on emotion: it’s as somber as it is haunting, begging the listener to listen to the story, one found in forlorn and despair. Superb control over pacing is present not just across the album, but within each track, ebbing and flowing as naturally as breathing, effortlessly executed as the melody weaves over the strings of the ensemble. After beginning in a near funerary procession, the track catapults into a sense of urgency, the pure speed and thrash-fueled distortion pulling the audience abruptly from ice into unyielding fire. With each new passage mounting and then fading, the four instruments tangle with one another beautifully, creating levels of depth and nuance that are easy to miss on the first listen through.

As the song flows naturally into the starting echoes of title track “Cell-0,” it becomes rapidly apparent that this is not merely a collection of fragmented puzzle pieces haphazardly taped together. No, this is an album that is meant to be devoured in its entirety, riding the waves of a deep bass, heart thundering with the pace of the furious drums, and emotions pulled unwitting with the commanding presence of the lead cello. At times in this track, it is the strings that lead the charge, spitting their story at unimaginable speeds, but at other times the arrangement encourages a racing frenzy of drums to contrast prolonged notes across the trio of strings. “Cell-0” is filled with a sense of determination, perhaps one tainted by darkness, Paavo Lötjönen’s heavy bass pushing a steady rhythm consistently throughout the track’s delivery. 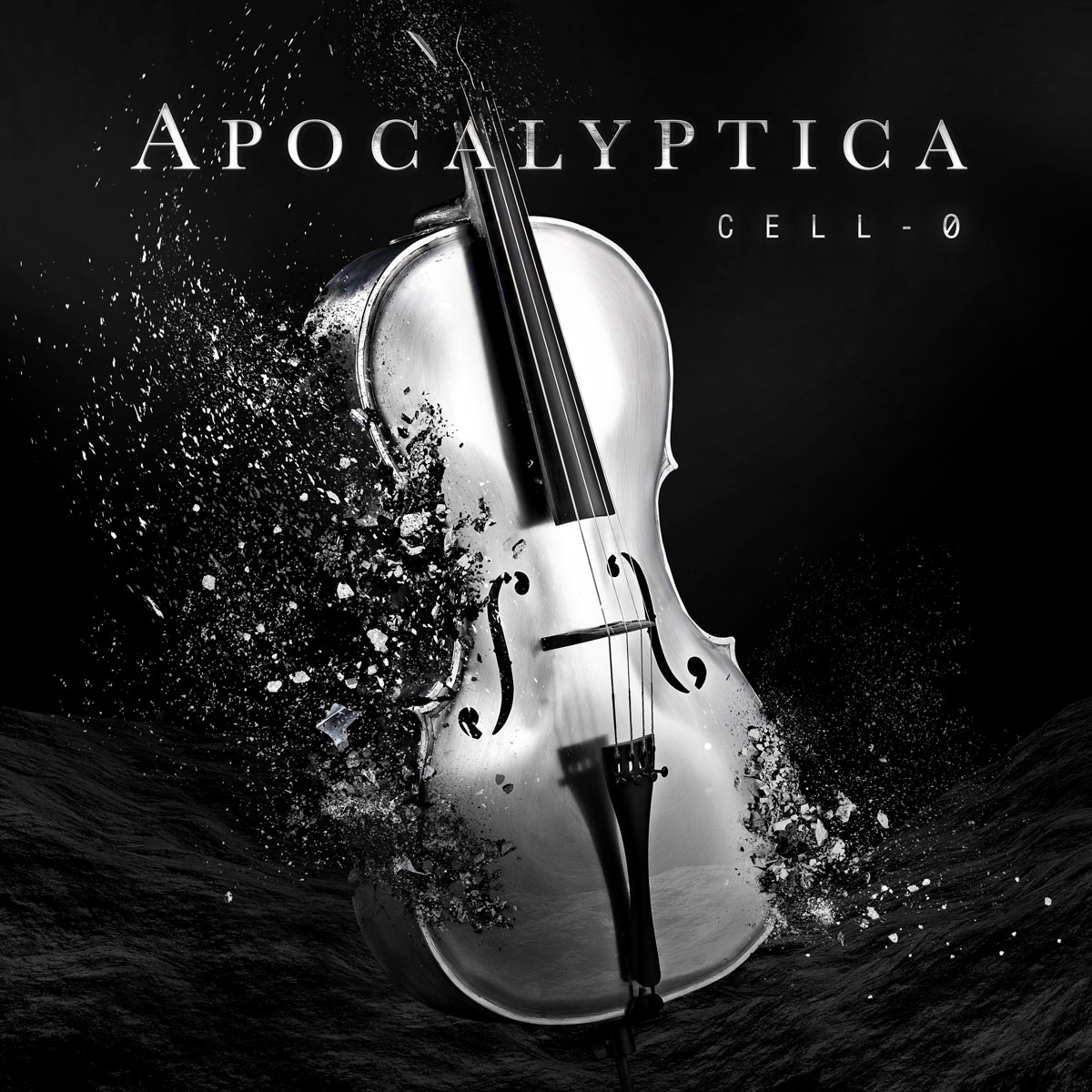 Following the first two tracks are stunning gems “Rise” and “En Route to Mayhem,” both much more fiery and evocative than the more tender and imploring opening songs. Whereas “Cell-0” felt as though it were a warning, “Rise” emerges as a ray of warm sunlight, beginning with bright and gentle notes that evoke feelings of peace and restfulness. Compared to the coldness and sharp edge that listeners had experienced to this point, the melody of “Rise” is a tender embrace that seems to caress as much as it uplifts. Once more, the pacing is magnificent, never pushing the flow of the song to speeds that would jar listeners out of an intentional meditation. Though short, it is a picture of pure bliss, percussion providing nothing more than a steady heartbeat to keep time, the brighter notes mixed beautifully against the depth of the bass, making a song that seems to be almost three dimensional as it soothes and ponders.

When it comes to tracks that will cause the name “Cell-0” to be broadcast far and wide, “En Route to Mayhem” is the incontestable frontrunner, a show-stopper of unparalleled magnitude. There is fire here, there is fury, there is a bright spirit unwilling to be broken, demonstrated through the burning tale of cellists fighting for speed and power. A tempting buildup that mirrors that of “Ashes of the Modern World” brings a deeper, more jarring bite from Mikko Siren’s drums, and a throaty bass that resonates at a frequency so low it lingers just above suffocation. But it is not this careful balance of power which makes “En Route to Mayhem” so incomprehensible: it is nearly two full minutes of what can only be described as nearly raw thrash, with speed and fury that is as compelling as it is unique. Such brutality, nearly unrecognizable from the gentle grace that has made Apocalyptica so beloved, is a vibrant evolution that propels their legacy of stylistic change in a new and welcome direction. “En Route to Mayhem” is a song that demands repeated listens for the sheer skill required for its execution, and its commanding atmosphere is perfectly layered with tension and intensity. A beast rooted in thrash metal rears its head and takes control, but never manages to completely wrangle away the touches of sheer complexity and beauty that make Apocalyptica so unique.

Though no other tracks on the album come quite as close in terms of their bite, that is not to say they do not hold unique tales of their own. “Cell-0” is a game of balance, shifting from the gentle graces of “Rise” to the apocalyptic thunder raining down in “En Route to Mayhem.” This balance is once more captured in the aptly named “Fire & Ice,” which is an almost meditative invitation to seek and discover something beyond the surface. There are few artists so skilled in composition that it seems as though the music is asking the listener a question: Apocalyptica has almost mastered this art, their arrangements richly textured and inquisitive. “Fire & Ice” shifts in an almost translucent fluidity, borrowing from a cinematic grandeur that echoes across a musing bass as well as the stylistic heavy metal aggression that emerges in sharp and shrieking attacks on cello strings. Flowing in constant flux between these two outposts in a delicate dance shows not just skill in production, but absolute intent and creative prowess in arrangement, Apocalyptica manages to stun and soothe in the same breath, mixed by the expert hands of Andrew Scheps (Metallica, Black Sabbath).

Towards the end of the album is a track that seems to be the hidden gem of “Cell-0”. Also opening with a deep and soulful bass is the touching track “Catharsis,” which brings all of the haunting melancholy of the two opening tracks, but leaves behind their sense of impending doom. Rather than strictly ominous, the tones of “Catharsis” seem equal parts mournful and determined, the tale of a spirit trying to break free from a weight that is burdening them. This is accomplished through the beautiful layering of echoing cymbal clashes over a string-built tension that never quite breaks. A tasteful mix leaves mastermind Eicca Toppinen’s lead cello at the very center of the masterpiece, a sole protagonist in a struggle towards hope, towards an unspoken redemption. True to the track’s title, this seems to be a tale of letting go, releasing oneself from tension as the drums give way for a bright cello to take the lead spot once more. Another demonstration of stellar pacing and unspoken storytelling, “Catharsis” is a track that reaches deep for the listener’s soul and asks them to listen to themselves as much as they listen to the music.

“Cell-0” is not an album for the faint of heart. Those that wish for the music to tell them how to feel are best looking elsewhere, as “Cell-0” opens a yawning chasm that asks for listeners to look for meaning within themselves. There is no one way to interpret the tale that Apocalyptica has woven in this latest opus, which may very well be their most touching and most evocative album to date. Were they not transcendent of classification before, “Cell-0” has certainly carried them to a realm entirely their own, one where reality relies on the fluidity of their musical graces. Engrossing and enthralling from the first note to the final passage, this polished final product has fire and ice dancing effortlessly to form an immersive and inescapable world that holds raw talent and unparalleled vision.

Still, the words of this review may fall short. How is one supposed to describe the effervescent soul of something so touching that one feels it in their heart and their stomach at the same time? How are mere words supposed to qualify the way that the notes leave a hollow absence in the soul once the music stops playing? Most of all, is it even possible to put words to an album that becomes part of the soul’s never-ending story? Perhaps, perhaps not. The only way to know is to give the album a listen, and surrender to the journey of “Cell-0”.

Striking straight to the heart with a combination of graceful beauty and unrelenting fury, Apocalyptica share a creative vision that is as aggressive as it is delicately imploring. Pristine production, tastefully layered mixing, and top-tier musicianship come together to form a work of art that transcends classification. A masterpiece full of complexity, emotion, and technical dexterity, the pioneers of cello metal have delivered absolute euphoria in their most soulful release to date