A decade after the release of Black Wings of Destiny – the most recent acclaimed full-length release by DRAGONLORD, the passion project of Testament guitarist Eric Peterson – the wait is finally over for fans of the high-fantasy symphonic black/death metal project. Peterson have revealed details regarding the long-awaited third DRAGONLORD album, entitled Dominion. The album is scheduled to hit stores on September 21, 2018 via Spinefarm Records, and will feature eight tracks of devastatingly unrelenting black and death metal assault. The first lyric video for the album titled track and a couple of trailers can be seen below.

Dominion features Eric Peterson on vocals, guitar and bass, Lyle Livingston (Psypheria) on orchestrated keys and pianos, Alex Bent (Trivium) on drums, and notable fantasy metal singer Leah – who has performed/recorded with members of Blind Guardian, Nightwish, Delain and others – on female vocals and choirs.

Eric Peterson says: “I’m super stoked for you all to finally hear “Dominion”! This song has all the arsenal to engage any metal appetite! From the first drum cannon-walloping performed by Alex Bent, to the melodic discorded sounds of my guitars and haunting choirs performed by Celtic singer Leah, entering in my lyrical blackened satanic tongue followed by unholy orchestrated strings and violas performed by Mr. Livingston – this song has it all! A beautiful violent storm whirls your way! Breaking down to two old school influenced guitar solos voiced before and after some cleaner melodic singing, only to be sucked back into the vortex… Enjoy!” 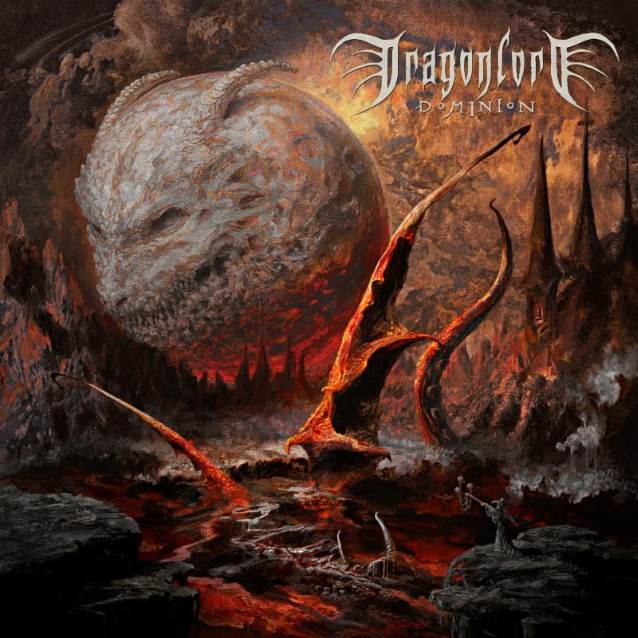 If the road to Dominion was long, it’s only because Peterson strives for perfection. “The biggest obstacle was getting the vocal patterns and lyrics right; telling the story of the music. Maybe I was a little too picky, but at the end of the day I’m glad we didn’t settle for things that I wasn’t feeling right about.”

Eric Peterson is tuned to E Flat on “Dominion”, and used his two favorite Les Pauls for rhythm and some solos; his Ritchie Blackmore Fender Strat for other solos, as well as his signature Dean Old Skull Flying V. “I used a lot of different guitars to get various sounds. I didn’t want my tone to be too close to TESTAMENT, but wanted to still maintain my signature sound. I really felt I needed to lay down the kind of stuff I do on my own — but not necessarily on records,” he explains. “I’m pretty stoked of the outcome on the soloing end.”

Peterson formed DRAGONLORD in 2000 as its singer and guitarist (with keyboardist Lyle Livingston and now-ex-members Steve DiGiorgio of TESTAMENT and Jon Allen of SADUS), and notes that the growth from DRAGONLORD‘s first two records to the cinematic triumph and brutal blast-beats of “Dominion” has been immense. “Dominion”‘s stellar, complex, brutally symphonic metal is triumphant in its execution, bringing together layers of meaning and musicality into an unholy whole.