Nita Strauss, the Los Angeles-based guitar shredder for the ALICE COOPER band, has launched “Rock Guitar Fundamentals” — a three-module online guitar teaching program suitable for learners of all levels. The course is available at www.iwanttoplayguitar.com and for a limited time, Nita is offering fans a 50% discount. No code required.

“Rock Guitar Fundamentals” is an online teaching program developed by Nita with a simple goal — getting guitars in as many people’s hands as possible and helping to improve their playing. Nita developed a three-module system where aspiring learners can jump in wherever their skill level is, from picking up the guitar for the very first time to advanced players who want to brush up on music theory or learn some shred tips and tricks.

Module One is designed for the brand new player and goes over the anatomy of the guitar and all the basics like how to hold the pick correctly, fret the notes, tuning and more. Module Two is highly focused on technique and theory, approached from a rock player’s perspective to be very easily understandable for the modern musician. Module Three is where you start to find the bells and whistles of sweep picking, legato, whammy bar tricks, and more.

Nita says of the course: “I see so many people online saying they want to play guitar but have no idea where to start. And many more experienced players that get frustrated by technique and theory. So I wanted to create a step-by-step course that explains everything clearly from a rock guitar player’s perspective. If you’ve never picked up a guitar before and you start this course from the beginning, as long as you’re willing to put in the time, you’ll end up with a great knowledge base to play solos, write songs, and play on stage with a band.”

Through obsession, dedication and sheer hard work, Nita has not only been firmly established as one of the best guitarists in the world, she is also a role model, a trail blazer, a fitness fanatic, a phenomenal performer and a total badass. She was honored at the 2019 She Rocks Awards as the recipient of the ‘Inspire’ Award which was presented to her by her life-long hero, Steve Vai. 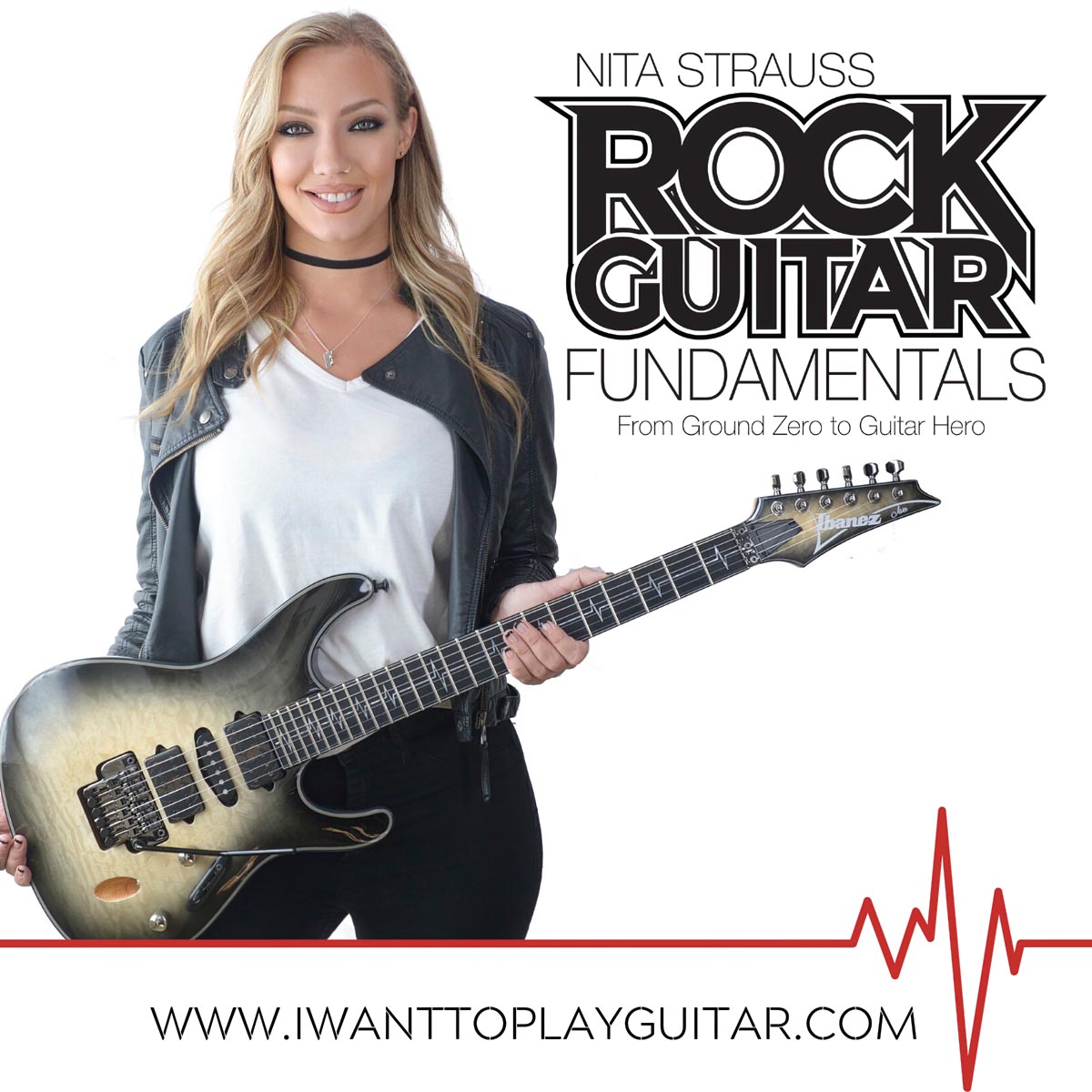 As well as wowing fans all around the world as Alice Cooper‘s touring guitarist, Nita has graced the covers of Guitar World and Guitar Player, performed for millions upon millions of WWE fans worldwide at Wrestlemania and Evolution, she was the first female to have a signature Ibanez guitar (which now hangs in the entrance to the legendary Guitar Centre on Sunset Blvd ), consistently broken attendance records at guitar clinics across the country and played ‘America The Beautiful’ at NFL games. Strauss has been playing with Alice Cooper since 2014 when she replaced Australian musician and former Michael Jackson player Orianthi. She joined Alice in time for a mammoth MÖTLEY CRÜE tour. She was recommended to Cooper by the legendary rocker’s former bass player and WINGER front-man Kip Winger.

In among this perfect storm of obsession, passion and sheer hard work, Nita also found time to write, produce, engineer and record all guitar and bass parts on her debut solo album, “Controlled Chaos” which was released in November 2018. The album is an epic, 11-track journey of jaw-dropping technical proficiency and highly emotive song writing which went straight into the top ten on the iTunes Rock chart upon release and debuted at#1 on Billboard’s Top New Artists Chart,#3 on the Billboard Label Independent Chart and #4 on Billboard’s Top Hard Rock Chart. Nita has been busy writing and recording for the follow-up to “Controlled Chaos.“