Legendary Dutch progressive rockers Kayak recently announced they will return with their 18th studio album ‘Out Of This World’ on May 7th, 2021. Following the launch of the album’s first two singles, they are now revealing video for the album’s epic title track, and you can watch it now.

Ton Scherpenzeel comments: “Ever had the feeling you wanted out of this world, that sometimes seems to border on insanity? This is about longing for an escape to some faraway peaceful place with the one(s) you love. For reference, we’ve literally included a phrase from an old Kayak song about a modern Noah and his space ark.”

The album is now also available for pre-order, arriving as a Limited CD Digipak, Gatefold 2LP + CD, and as Digital Album. An exclusive blood red vinyl edition is available directly from the band. Pre-order now here.

Ton Scherpenzeel continues: “Many people seem to consider the past year as a lost year, due to Covid. I don’t. I am not saying it was great, but it made me realize, once more, how fragile we all are. How connected everything and everyone is, with actions and consequences that touch us all. And that, on a smaller scale, and much closer to home, the new Kayak album could only have turned out the way it did. More than ever, it is clear that working with each other on this level can never be taken for granted. It requires dedication, and respect for each other’s talents and input. That’s the foundation upon which Kayak in 2021 is built.”

‘Out Of This World’, the band’s eighteenth studio album, with 15 new tracks, spanning 70 minutes of energetic and incredibly diverse material- though still very much recognizable as Kayak. It is clear that the new found energy has gained even more momentum since Hans Eijkenaar rejoined the group. Although they were forced to cancel all tours because Ton Scherpenzeel suffered a heart attack at the end of 2019, and immediately after that because of the Covid pandemic, we’re hearing a band that, since the demise of Pim Koopman in 2009, has not sounded more together, balanced and motivated. 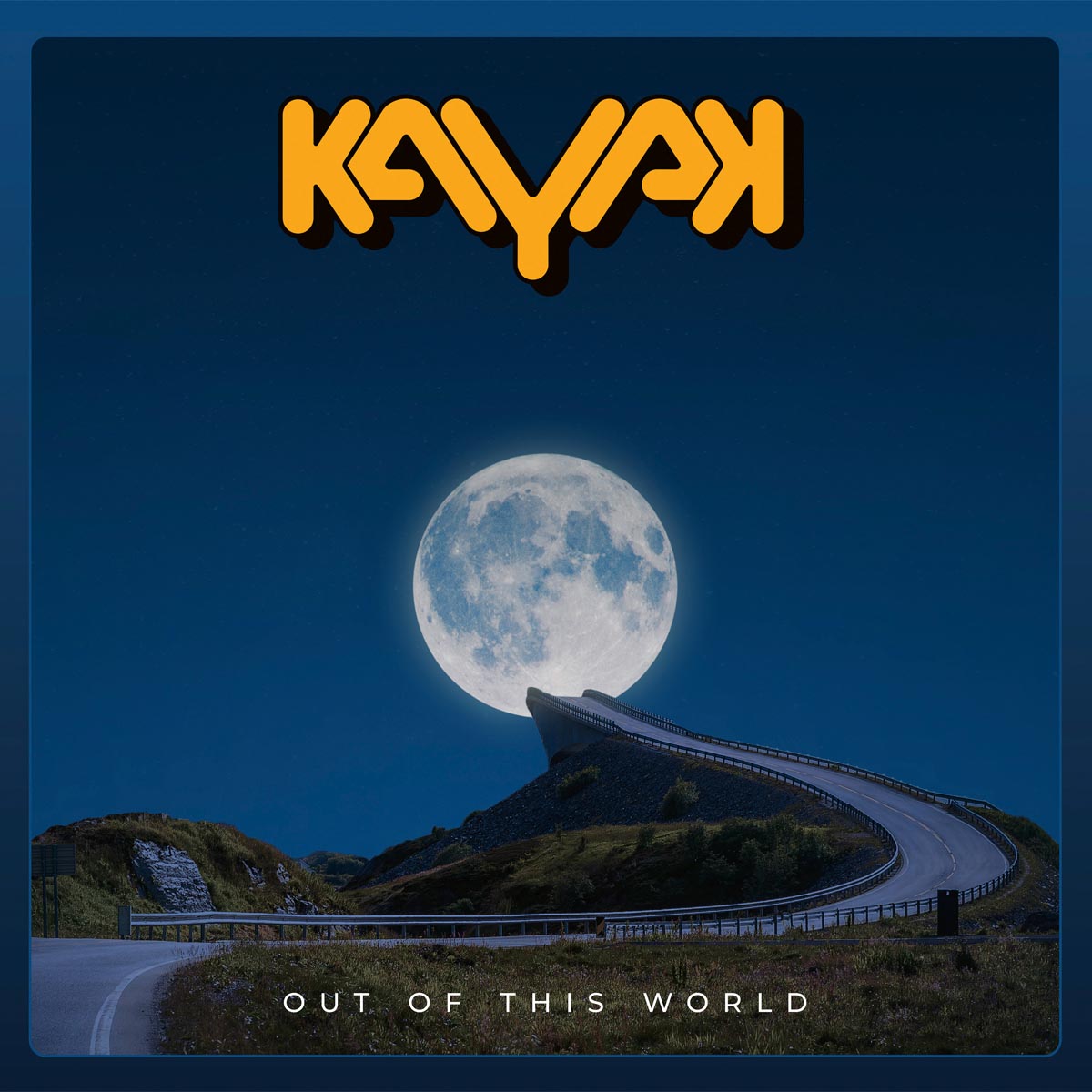 “Out of This World” Tracklist:

KAYAK was formed in Hilversum, The Netherlands, back in 1972, by keyboard player Ton Scherpenzeel and drummer Pim Koopman who struck up a friendship in their early teens after meeting at a local volley ball club. They were committed to writing original material. With loads of melodic, symphonic songs in their pocket they recruited fellow music conservatory student Max Werner (lead vocals) and Johan Slager (guitar). After bass player Cees van Leeuwen joined, the first lineup of KAYAK was complete with the new band being signed by EMI Records being launched as a new supergroup. Their debut album ‘See See The Sun’(1973) featured a minor hit single , ‘Lyrics’, with ‘Mammoth’ and the title track also reaching the top 40. The album sold well in Holland, earning the band significant critical acclaim and developing a growing army of passionate followers.

After a series of successful albums and several hit singles in their homeland KAYAK was on the verge of an international breakthrough in 1977 when the single ‘Want you to be Mine’, from ‘Starlight Dancer’ achieved chart success in the U.S, peaking at #55 in the Billboard Charts. KAYAK was even voted Most Promising Band of the Year by the influential American music magazine Record World. Due to the fact that charismatic lead singer Max Werner wanted to fill the vacant position of drummer meaning the band was suddenly without a lead singer, making it impossible to embark on an American tour. KAYAK focused on finding a vocalist instead. The search began with advertisements placed in British magazine ‘Melody Maker’, spotted by Edward Reekers, a huge fan of the band since the early days. Passing the audition with flying colors he became the new frontman for KAYAK and with the addition of two female singers the band returned to the recording studio to create their 6th album, the award winning ‘Phantom of the Night, which turned out to be their commercial peak. The blend of progressive rock and immaculate pop brought them phenomenal success. The album went to number one on the charts, reaching platinum status and ‘Ruthless Queen,’ became their highest charting single, (#4 in the Dutch charts).

The next album, ‘Periscope Life’ (1980), was similar in style and recorded in Los Angeles. It consolidated KAYAK‘s position as one of Holland’s most popular bands. With their next effort, ‘Merlin’ (1981), KAYAK returned to its original progressive and symphonic rock roots, with a suite about the legendary medieval magician on side A. Many music fans considered this a milestone in the bands career. Personal and musical struggles within the band however led to a break up in 1982. The first era of KAYAK ended after the release of the semi live album ‘Eyewitness’.

The next chapter in KAYAK’s career began in 2006 with ‘Kayakoustic’, presenting the now seven-piece band in an intimate setting. In the new millennium KAYAK was resurrected after an 18 year pause and came back with the strong symphonic crossover album ‘Close to the Fire’ (2000) with again Pim Koopman on drums and Max Werner on vocals. Unfortunately, due to ill health Max was soon forced to leave, with ex- Vandenberg singer Bert Heerink, who already joined the band on stage, taking over. With Heerink three studio albums were recorded, including the rock opera’s ‘Merlin – Bard of the Unseen’ and ‘Nostradamus – The Fate of Man’, their most ambitious efforts yet. The rock opera’s, dominated by longer, prog-based compositions, also showed KAYAK’s theatrical side with an extended cast of singers and dancers contributing to an impressive first rate live experience. It also marked the return of Edward Reekers and introduced Cindy Oudshoorn as first female lead singer.

2008 was an important year celebrating their 35th anniversary and embarking on a large tour taking the group to the theaters and clubs. ‘The Anniversary Box’, a DVD containing the Paradiso concert as well as a collection of fan chosen tracks is released.

The tragic, unexpected death of drummer and composer Pim Koopman one year later in the middle of the ‘Letters From Utopia’ tour almost led to KAYAK’s downfall, but two years later the group re- emerged with Hans Eijkenaar on drums and the album ‘Anywhere But Here’, dedicated to Koopman. After a period of two years preparing and recording the new rock opera ‘Cleopatra- The Crown of Isis’ was released in 2014. Shortly before the tour, lead singers Reekers and Oudshoorn unexpectedly and inconveniently announced their departure, leaving the band in disarray. But as they say “what doesn’t kill you makes you stronger” and like the proverbial cat with nine lives – in 2018 KAYAK came back with a vengeance and ‘Seventeen’.