As the band’s latest single “Scarlet Cross” continues to make an impression after landing at #4 on the Billboard Hard Rock Chart last week, Los Angeles rockers Black Veil Brides have announced their next virtual concert. Alive And Burning 2 – a global streaming event – will air on December 11th and start at 7PM across four time zones (PST / EST / UK / AUS). The local 7PM streaming time was created so global fans can experience the energy of Black Veil Brides at a reasonable start time from the best seat in the house. The show will feature a collection of fan-favorite greatest hits as well as the debut live performance of the band’s new single “Scarlet Cross.” Tickets for Alive And Burning 2 are now available in various bundle configurations can be purchased at www.BlackVeilBrides.LIVE.

“We are so excited to share Alive and Burning 2 with the world! This show is a collection of some of our favorite songs spanning our entire career as well as the live debut of ‘Scarlet Cross.’ We feel confident that while the pandemic continues to prevent in person live concerts, this show will be a fun experience for any BVB fan. We set out to make a more cinematic streaming show and give the BVB Army something special. We can’t wait to unveil it on December 11th,” exclaims Andy Biersack. 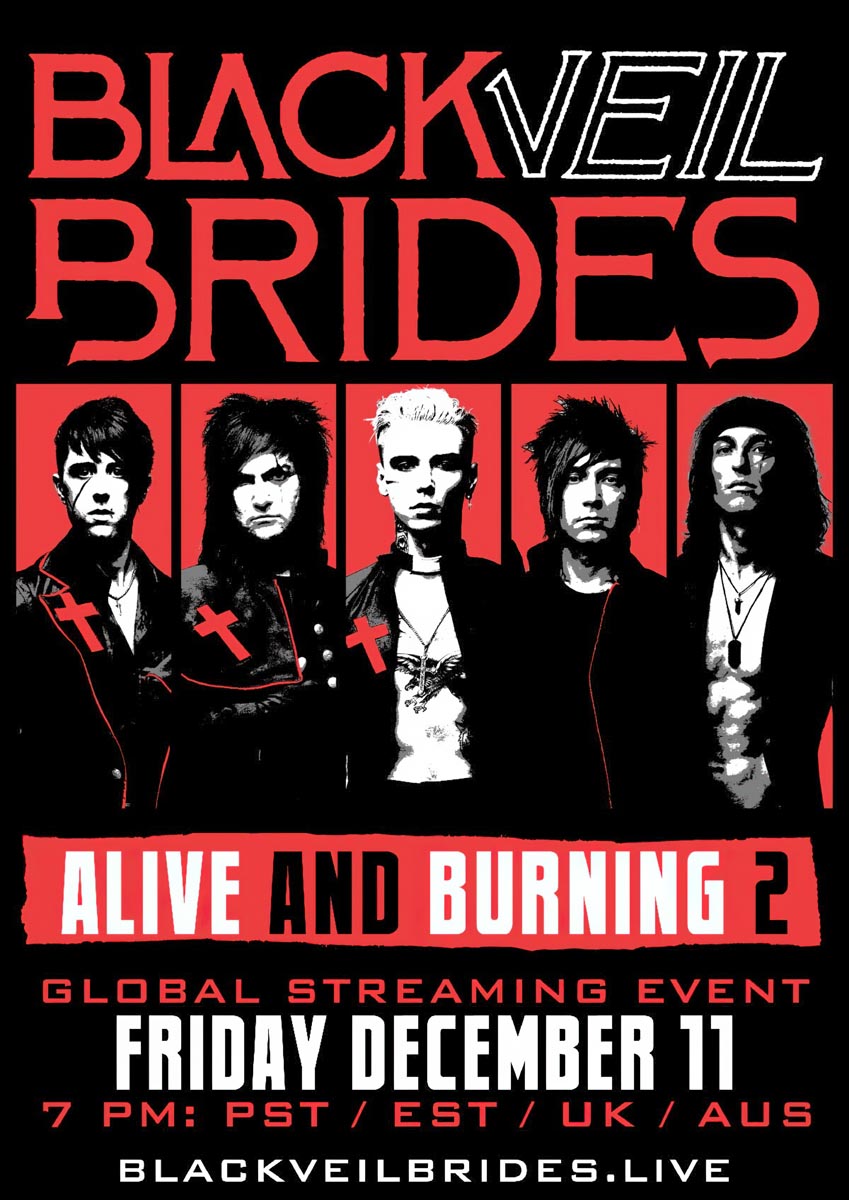 Black Veil Brides are hard at work putting the finishing touches on the upcoming album “The Phantom Tomorrow“– scheduled for release via Sumerian Records in 2021. More information on the latest musical creation from Andy Biersack, Jake Pitts, Jinxx, Lonny Eagleton and Christian Coma will be available in the near future.

Like their band name suggests, Black Veil Brides evoke transcendent visions of an impenetrable hereafter, intermingling with a steely focus on the dark passions and elusive mysteries of the here and now. A romantic fantasy first summoned in a small town by founder Andy Biersack – a creative who was fascinated with death rock, theatricality, and monsters (both real and imagined). It wasn’t until moving to Los Angeles that the unstoppable force the band is currently was finalized. The band (and its members Andy Biersack, Jake Pitts, Jinxx, Lonny Eagleton, Christian Coma) Instagram and Twitter accounts command close to 10 million followers between them. “Vale,” the group’s most recent full-length album, went to No. 1 on Billboard’s Top Hard Rock Albums chart. In the hearts and minds of their fans, Black Veil Brides represents an unwillingness to compromise and a resistance to critics (personal and professional), fueled by the same fire as the group’s own heroes, the iconoclasts whose creative output, once dismissed, is now canonized