When we were discussing the topic of “Desert Island Picks” and Van Halen came up, I instantly raised my hand. Being a long time fan and still an avid listener of their material today, I took this as an opportunity to review their whole output and see what those songs mean to me today. But to be fair, they only have twelve albums in their whole discography, so choosing ten would be too easy: leave out a couple of obvious clunkers and you’re set. To make it a bit more challenging, we decided on picking only five, and I excluded the live albums.

With a million books and articles documenting their career, including a few written by people who gravitated around this planet-sized band, it´s hard to say anything new about them. But here’s a list I made from the heart, with the albums that marked my childhood, and whose songs are still on heavy rotation on any classic rock radio. Without further ado, here are the albums I’d take with me if I was sent to a desert island: 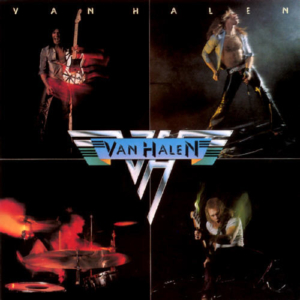 The only possible first choice on this list by any respectable rock fan. For me, no other first album by any band has made such an impact on music. It literally changed the game from there on, and influenced a whole range of musicians – not just guitar shredders, but a vast array of bands who not necessarily play heavy music. From the frantic siren and bass thumping of “Running with the Devil” until the fade-out of “On Fire”, there isn’t a dull moment on this release. Honed through years of playing in clubs and backyard parties in Pasadena, the repertoire is a summary of what partying in America in the late 70’s felt like. Their version of The Kinks’ “You Really Got Me” hardly seems like a cover, and the fact that Ray Davies started to jokingly refer to this song as “a Van Halen cover” says it all. Less obvious tracks like “I’m the One” and “Atomic Punk” show tight backing vocals, inventive guitar tricks and a burning desire to take the world by storm – and it didn’t take long for that to happen! “Eruption” catapulted Eddie Van Halen to the pantheon of guitar heroes, and soon they would embark on a world tour opening for Black Sabbath, blowing the British band off the stage every night.

I did not buy Van Halen’s catalogue chronologically, and this one was acquired in a very turbulent time for me, when getting into party mode wasn’t that easy. Van Halen I celebrates its 40th anniversary this year, and what a missed opportunity it will be if the band doesn’t play a single concert in its honor. 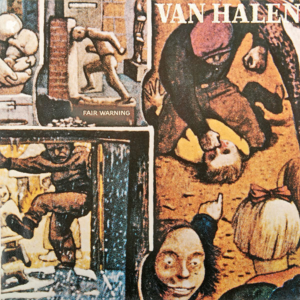 As a kid trying to absorb everything music wise in a time when internet did not exist, I was always intrigued by this one’s cover, and it took me years to find out where it came from: it is a detail from “The Maze”, a painting by a Canadian artist which depicts his tortured youth. One would he hard pressed to find a more appropriate cover for this album, where tales of troubled minds and misspent youth abound. This was definitely a curve-ball for the band, where they seemed to somehow detach themselves from their image of party boys from California on a bunch of tracks. Eddie’s guitar work reached a peak here, with the intros of “Mean Streets” and “Hear About it Later” being the highlights of his six-string abilities. It’s also worth noting how they seemed to experiment a bit more and enjoy new technologies discovered in the studio: there’s a reggae-tinged track (“Push Comes to Shove”), and an effect-laden instrumental where an Electro-Harmonix Micro-Synthesizer is used (“Sunday Afternoon in the Park”). This is also an album where the criminally underrated Michael Anthony gets to be heard at last – his work shines on a number of tracks, and his ever present backing vocals are particularly great on “Dirty Movies”.

On a personal note, the first time I heard this album it was on vinyl, and I repeated “Unchained” and “So This Is Love” the whole afternoon, driving my parents crazy – what better way to learn what a flanger pedal is? 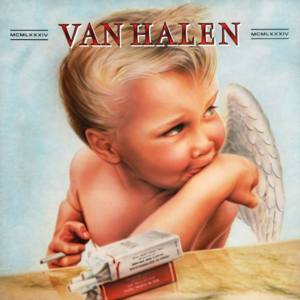 The album containing “Jump” – arguably their biggest hit, and the first ever song I heard from the band. I was nine years old in early 1985, and was starting to buy my own records with the allowance money my parents gave me. So I bought a compact album with four tracks from 1984: “Jump” and “Panama” on one side, “I’ll Wait” and “House of Pain” on the other. I was hooked instantly, and eventually broke one or two speakers by cranking the volume trying to figure out where that outro solo of “House of Pain” was going to. I remember thinking “… where does this dude’s screams come from?” This was a concise album and a troubled one to be conceived, because the tensions between Eddie and Dave were almost unbearable at that point. But no minute is wasted on the whole thing!

There was no MTV where I lived, only a weekly one-hour TV show that featured music videos in Brazil, and they certainly weren’t shy to show Van Halen there. That’s when I saw the hypnotic “Hot for Teacher” video, with young actors impersonating the band members in school, and “Panama”, where Eddie blew smoke rings at the screen and the whole band was carried around the stage held by a wire. More than musicians, to me they were superheroes! There are two often overlooked tracks on the album which I’ll make a point of mentioning: mid-tempo rocker “Drop Dead Legs”, which would only see its live debut in their 2015 tour, and “Girl Gone Bad”, where Eddie’s sound is so big that it seems he recorded the same guitar track ten times. This album is so strong that I even took my time to mention the biggest thing to come out of it: with big open chords and immensely catchy, “Jump” showed that they could write a hit, but opened a crack in Van Halen‘s shell when Dave and Eddie fought over it: Dave didn’t feel that Eddie should be playing keyboards, but thank God Ed put his foot down and it made it to the album.

Everything seemed perfect, until alcohol, drugs and egos broke the mold… 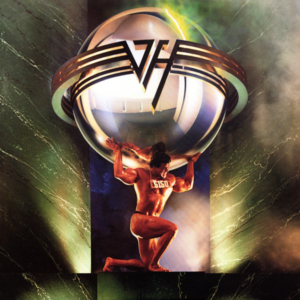 If there’s one thing certain in life, aside from out inevitable death, it’s that things change. The sooner you accept that, the better. As a kid, however, I didn’t know that, and it took me forever to accept that the Roth-fronted Van Halen was no more. That was their first album I bought upon release, and after a few listens, it went to the back of the pile of vinyls. I would only give it another spin in 1987,when my musical tastes had changed and I was able to properly enjoy this. There are songs where the old Dave swagger is almost matched, like “Good Enough”. Alex embraced the Simmons pads, which were universally used in the mid-80’s, and that inevitably dates the production, but the songwriting is really strong here. “Dreams” has not only one, but two mind-bending guitar solos. I remember listening to the beginning “Summer Nights” and thinking Eddie was just messing around with his guitar – that was his Steinberger GL-2T by the way, which he revamped a few years ago. The title track on this album might be my favorite performance the band ever did, especially live, when the whole solo is completely changed. On “Why Can’t this Be Love”, Eddie confidently takes on keyboards, and does a guitar-and-vocals unison with Sammy that emulated what Page & Plant used to do in Led Zeppelin. I chose this album for personal reasons of course – I’m the one who’s going to be isolated on an island for Christ’s sake – but that’s not to say this one doesn’t have a couple of not so great songs: “Get Up” and “Inside” for me are not their best material, and their only saving grace are Eddie’s solos. I still enjoy the album for what it is though, and would crank it loud all by myself. 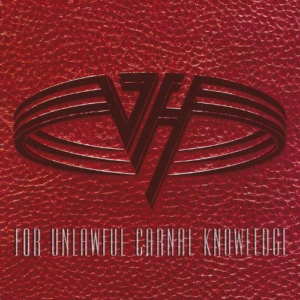 I call this one the last breath of American hard rock. It was released in June 1991, and soon three other albums would change the face of music: Pearl Jam‘s Ten, Soundgarden‘s Badmotorfinger and more significantly, Nirvana‘s Nevermind. Grunge would dominate the airwaves, but Van Halen would remain unscathed through that time.

Produced by Andy Johns, of Led Zeppelin fame, this is the best sounding album they did with Sammy. It spawned not one, not two or three, but a total of FIVE singles, including the award-winning “Right Now”. The band didn’t seem affected by grunge at all, and showed confidence by including the whole album on the set-list of that tour. At the time, MTV Brasil had started already, and I remember the exact day I came home from school and saw the video for “Poundcake” for the first time. Eddie uses a drill on guitar on that song, and who cares if Paul Gilbert did it first – to me it meant my superheroes were back on track. “Judgement Day” also showed incredible guitar work, with Ed tapping with his two hands. And it was also the first time I saw him use a double-neck, which he does on “Spanked”. There’s a homage to Rush on “Pleasure Dome”, and “Top of the World” is a fun song which stemmed from the ending riff of “Jump”. Eddie still found time to pay homage to his then newborn son Wolfgang, on the quick instrumental “316”. To me this is one of their most varied releases, with strong songwriting and with Eddie showing that, despite being swallowed by a horde of guitar players who learned his style and took things up a notch, was still able to write songs and solos that took the listener through previously non explored paths.

And there they are – my five picks of Van Halen albums to take on a desert island. Lists are made to be fun, controversial and personal, so there’s no need to aggressively question my choices. With that said, I’m VERY interested in finding out what you guys think of my list. Please post your comments here, and I’ll try to reply to as many as I can. What would be YOUR list of five VAN HALEN albums to bring on a desert island?