Two years ago I wrote this homage article, after the passing of the legendary NEKTAR guitarist and frontman Roye Albrighton. It saddens my heart to see that most of the news world have forgotten about him, with almost no online publication remembering the another anniversary of his death. For those of you who grew up enjoying NEKTAR‘s music or for those who came in contact with Roye‘s music one way or another at a later point in your lives, I invite you to read my original write-up below and to honor the memory of such an amazing musician and even better human being by listening to his music this weekend.

A FAREWELL TO ROYE ALBRIGHTON (Originally published on July 27th, 2016)

It’s been few days since the news of Roye Albrighton’s passing spread all over the Internet, and I am still in disbelief. Yes, it’s real, Roye has left us, and I can’t begin to describe my feelings: shocked, devastated, overwhelmed. Words simply cannot express the deepest desolation I felt in my spirit. Roye was an amazingly unique guitar player – very elegiac – and had a wonderful knowledge of harmony. He was not only one of the best prog-rock guitarist (and criminally underrated as well), he inspired young musicians everywhere. His sound drove NEKTAR to their heyday, propelling the band into mass popularity with one of the most astounding records in the story of music: “Remember the Future”. A concept album about a blind boy who communicates with an extraterrestrial being, “Remember the Future” was a big leap forward for the band, with a much more melodic sound than on previous albums and put them in the map as unique act.

But Roye was always Roye: a modest and graceful gentleman with a warm smile painted on his face at all times; even when playing in front of hundreds of fans. He nearly died because of a liver infection in the late 90s, but his spirit was always stronger than the obstacles: given just weeks to live, the universe gave him a second chance after a suitable donor was found; he recovered and finally NEKTAR spring back to life, headlined NEARfest in 2002 and released four more albums. NEKTAR’s music had a vast place in the soundtrack of my life, I remember playing their records over and over until they eventually worn out. I finally met Roye on 2015 during Cruise to the Edge; after the band finished the Q&A session we went to the side of the stage to see if there was a chance to take a picture with them, and the picture request turned into a conversation sprinkled with good laughs for half an hour. I even remember when my wife asked him for a photograph he goofed “Sure my dear, I’m in special today!”. It was a moment I will forever treasure in my heart. 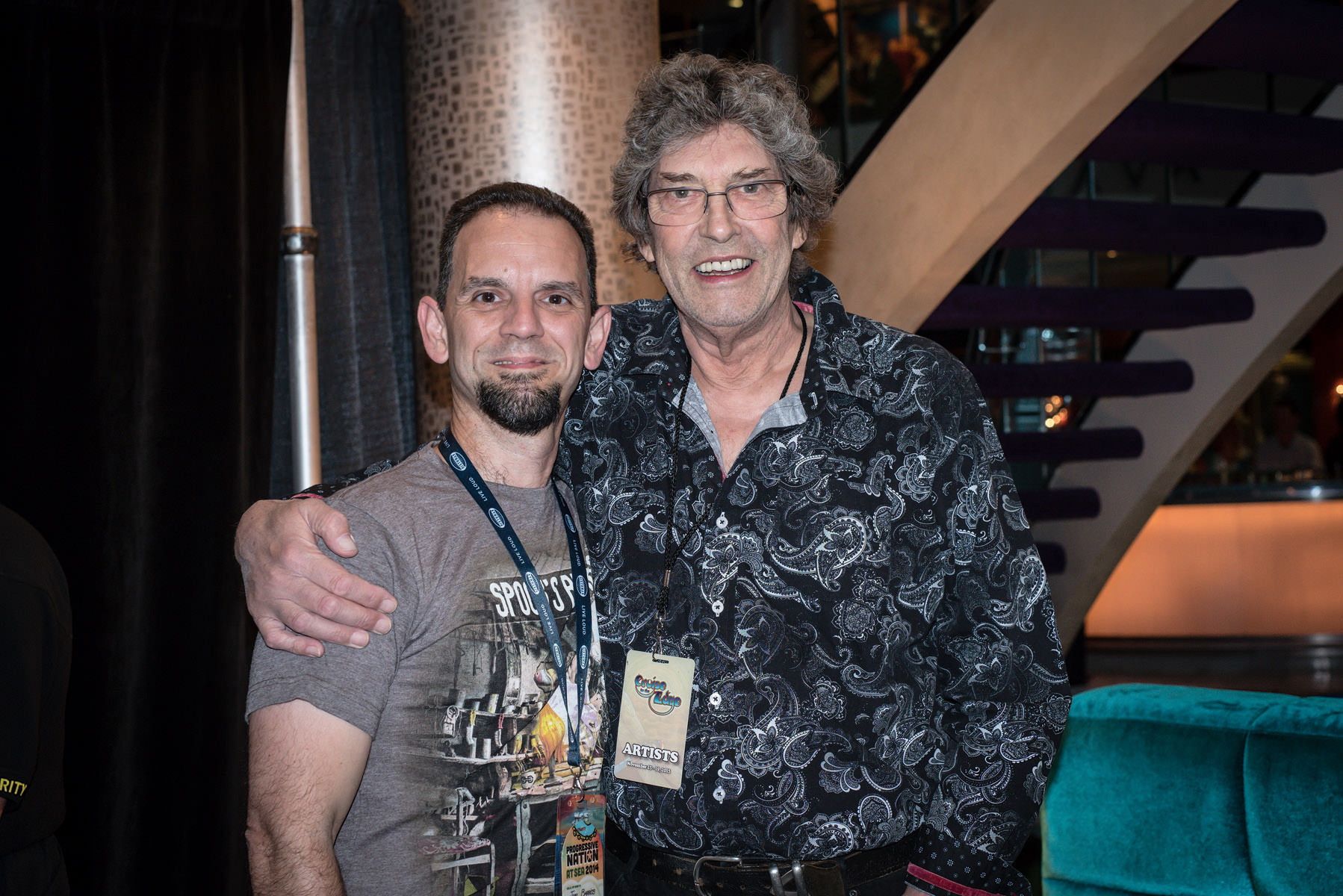 Roye Albrighton and me

A day later the band was attending a scheduled Meet and Greet session with fans, and when my wife and I arrived to the designated room Ron, Klaus and Lux were there, but Roye was missing. I asked Ron what was going on, and he said: “Roye is probably wandering around the boat trying to find his way to get here”. We decided to go look for him and we found him, exactly how Howden had said. He looked kind of lost, but always smiling. My wife took his hand and we accompanied him to the Meet and Greet room, and obviously we took another picture with the whole band.

He will be missed the world over but none is greater than the loss in my heart. Long may his memory resonate through the lands while he travels his last “Journey to the Center of the Eye”. Thank you Roye, for giving birth to NEKTAR, for all the years of musical pleasure, for the laughs, for the good times, and for forever showing us how to Remember the Future.

PICTURES OF THE LAST EVER NEKTAR SHOW WITH ROYE ALBRIGHTON