October 13 brings us the second installment of Rush history, as told by journalist Martin Popoff. The trilogy started with “Anthem: Rush in the 1970s” (reviewed by us here), and will be concluded next year with “Driven: Rush in the ‘90s and beyond”. As mentioned in our look at his previous book, Martin has written 7,900 album reviews and almost a hundred books related to rock and metal, and one would be hard pressed to think of a better person to tackle the humongous endeavour of documenting the trio’s lengthy history. Even more so than in the first book, the task at hand becomes particularly difficult due to the fact that there’s a decreasing amount of new information in the band’s pantheon to be discovered by long time fans as their history progresses. Magazines and journals covered the creative process of each album extensively, and some of those who have followed them since their inception might think this exercise is a bit redundant. Martin, however, manages to find the difficult balance between covering the paths already explored in the band’s career by other writes, whilst also adding new information.

One of the keys to the success in making this book an interesting read is the interviews conducted with key personnel. The statements of Howard Ungerleider, the responsible for lights and the visual elements of the Rush’s live performances, are prominently featured again, detailing the evolution of the live projections as technology took a massive leap forward, and how the sonic aspect was augmented on stage by the films accompanying each song. Also of note is the extensive dialogues with Peter Collins, who produced the most synth-laden albums of the band’s career, and Rupert Hine, who rescued them from the infatuation with keyboards and helped Alex Lifeson get his guitar onto the forefront of the band’s mix.

As announced in the preface, “the business of Rush is very different in this book versus the first one, reflected in the vast difference between the live albums ‘A Show of Hands’ and ‘All the World’s a Stage’“. In fact, one of the few common threads that could be found between “Hemispheres,” their last studio album of the ’70s, and “Presto,” the last release of the ’80s, is a relentless pursuit of evolution. As Neil Peart would put it on their most famous song, ‘Tom Sawyer,’ “changes aren’t permanent, but change is”. The move from longer, intricate pieces of music, into shorter, more palatable songs was born not out of commercial sensibilities or pressure from the record company, but from a feeling within the trio that their modus operandi needed to change. Having a longer piece in the album and an overall concept through the lyrics had been explored to is maximum potential, and the look they were going for had to follow the shift in direction. Out with the satin robes ad long hair, in with the shoulder pads and keyboards, in the blink of an eye. 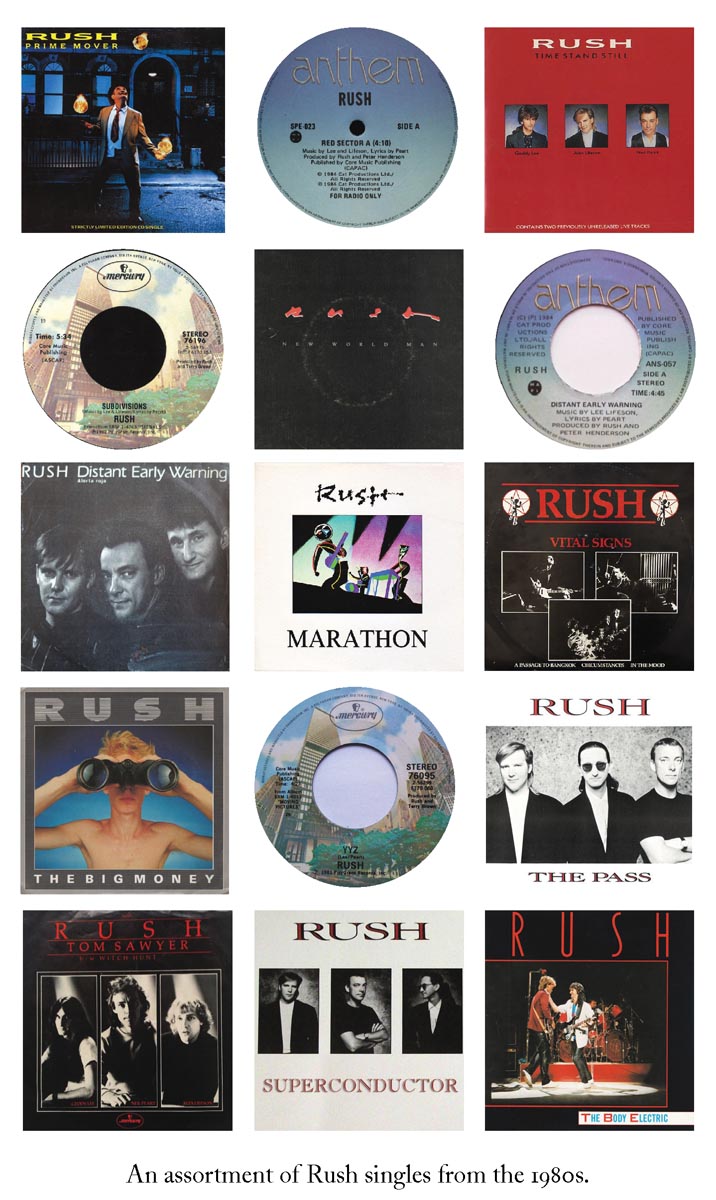 “Limelight” starts with the making of “Permanent Waves”, which was the beginning of their love relationship with Le Studio. “Hemispheres,” the previous studio album, was a difficult one to make, and as Geddy puts it, “All the crappiest experiences of your life prepare you for the next step”. The focus on shorter songs paid off, with the band achieving their first hit, in the form of “The Spirit of Radio”. As told by long-time road manager for the band Liam Birt, the song is about “how radio can make or break people. And of course, radio loved that song because they seemed to think it was a pat on the back. I don’t think it necessarily was — you can read those lyrics more than one way — but radio seemed to get very attracted to that song. To me, it was also a shot at radio. The joke is you can never ﬁnd a Rush song you can dance to — reasonably true. Even if you could dance to ‘Tom Sawyer,’ you’d be exhausted halfway through. As far as what attracts people to their music, I really don’t know.”

The creative juices were flowing nicely at the time, and the transition between “Permanent Waves” and “Moving Pictures” was as seamless as can be. As the band struck the perfect midpoint between rawness and sophistication, the shift in popularity came naturally, and the new status of the band is demonstrated here by the touring itinerary in the promotion of their most revered album, which saw them returning to several cities on different legs of the trek, always in bigger venues than before.

Another aspect of the book which is surely worth noting is that every single song’s purpose and concept is addressed. In the “Moving Pictures” chapter, for example, we learn that the lyrics of “Limelight” are not just about encounters with fans and industry execs, but also the concept of having not time on your hands, but hands on your time – the increasing waiting time before and after the shows, a source of bother for any touring musician. In opposing concepts, the photographer is celebrated in “The Camera Eye“, but dreaded in “Limelight“. Shedding light into their most famous songs is somewhat easy because there has been plenty of scrutiny over them through the years, but here, even the most obscure track is detailed. Martin’s look at the different angles explored in the lyrics of “Natural Science” is particularly impressive.

Given the ever changing nature of Rush’s sound, it almost seems unfair to try to accommodate their history in ten year brackets. Consider the contrast between the rawness still present on ‘Tom Sawyer’ and “YYZ”, versus the thin, slick production of songs like “Scars” or “War Paint” from “Presto” – they’re like water and wine. The changes in hair style and snare style were quasi-vertiginous then, more so than in any other decade for the trio, and that didn’t come without consequences. One of the most divisive and sensitive topics, the introduction of keyboards, is addressed with several different points of view. The increasing domination of technology would shape their sound for years to come, and changed the way they wrote all their albums from “Signals” onward. That choice brought a few casualties: not only it alienated a chunk of their fanbase, but pushed away someone who was regarded as the fourth member of the band until that point – producer Terry Brown. 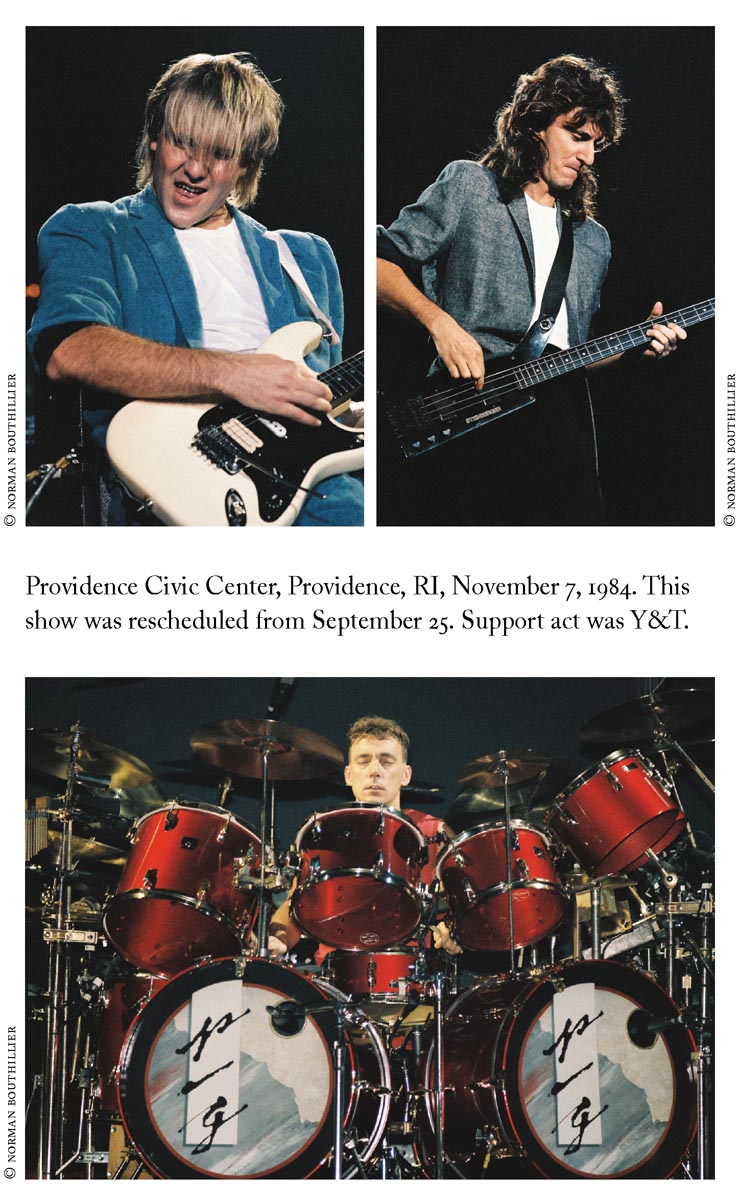 The delicate topic of the band parting ways with Terry is addressed in a kid-glove approach, with views from both sides. Rush was always about “productive disagreement” when writing an album, and the band and producer concurred that they were going in different directions at the time that “Signals” was recorded. Terry wasn’t on board with the reggae influences, the barrage of keyboards or the electronic drums, and a difficult yet necessary decision was made, causing a void which proved more difficult to fill than was anticipated.

If “Signals” was “the dawn of the synth”, the albums to come would see the instrument take even more room than before, with Alex Lifeson thinking hard in order to find room for his six-string work and reposition himself in the intricate tripod upon which the band was set. Another struggle typical of that era was the search for the right producer. After the aforementioned divorce with Terry Brown, the band locked in with Steve Lillywhite to produce “Grace Under Pressure”, only to see him bail out in the las minute, and had to settle for Peter Henderson. Without the comfort of Terry at the helm, the genesis of “Grace Under Pressure” was a difficult one, and the end result was one of their most polarizing albums to date.

In contrast, “Power Windows” marks another turning point for Rush – this time, a turn for the better. That was a period when the use of keyboards was dominated by the band – or maybe the band allowed themselves to be fully dominated by it. Peter Collins was brought into the fold as producer, and overall, all three members were happier with the recording process then. The issues faced with the need to reproduce each sound live, instead of compromising for a stripped down version of those songs, is also analyzed in detail by the author. Also worth noticing is how averse the band was seemingly getting with touring, particularly with the travels outside of North America. Ray Danniels, the band manager and captain of the ship, chimes in on the efforts to talk Neil into touring more, as early as 1985. 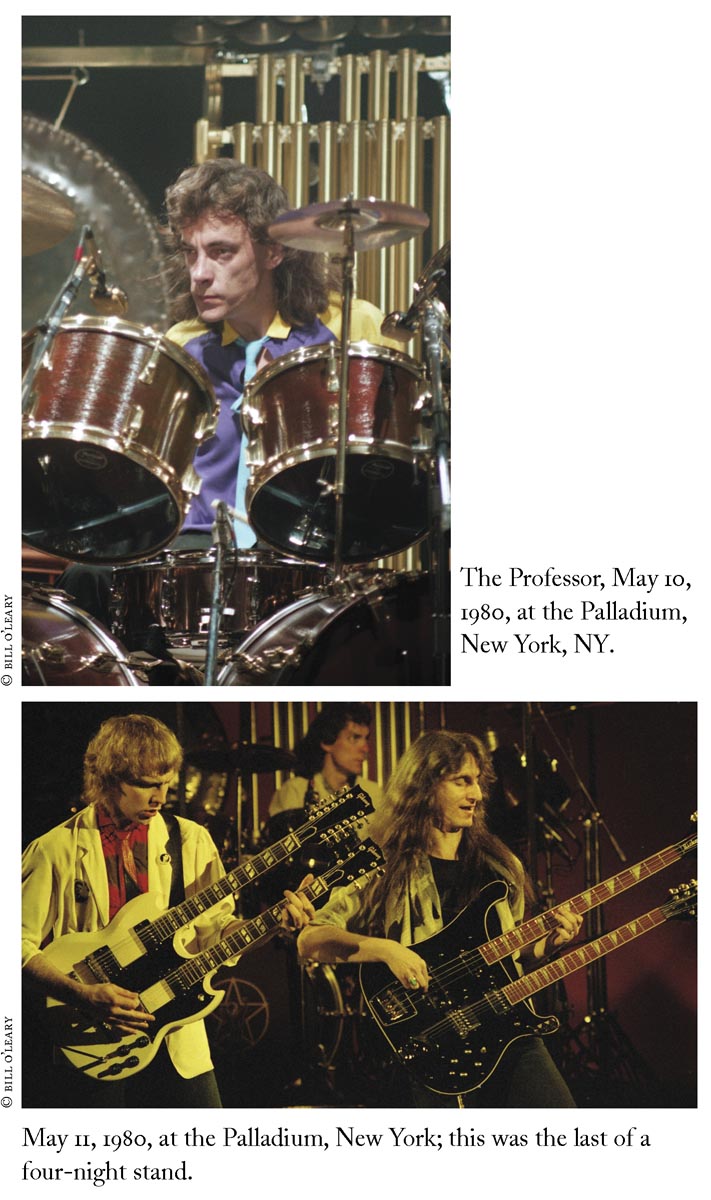 Dedicated musicians that they were, Rush always came into the studio very prepared, with the pre-production in well advanced stages. True to their adventurous nature, however, they left some room for chance, with at least one song being purposefully written in the last minute in the studio. Martin previously illustrated the case with “Twilight Zone” from “2112.” Here, “Vital Signs” and “Force Ten” are cited as examples of that, but even more notably, “New World Man“. Initially dubbed “Project 3:57”, the time they needed to complete an album, it went on to become their only song to crack the US top 40.

Is there room for criticism? Always. Martin says “Entre Nous” was never played, but it was actually on the setlist of the Snakes & Arrows tour. But that’s a minor, factual quibble, and even the biggest Rush buff would be excused of such a small flaw. And just as I’m a fan of Martin’s work and took on the task of objectively reviewing his book, the author is enough of a fan to give a detailed account of the band’s history, but distances himself enough to offer his critique when he sees fit. That comes, for example, when he addresses the hybrid nature of “Exit… Stage Left”, an album which arguably documents their peak, but fails to convey the energy of the trio on the stage due to the admitted many studio touch ups, and also when addressing the patronizing nature of the lyrics of Tai Shan.

As the opportunities to celebrate Rush’s catalogue are getting more and more rare, this book is a must. The band’s chameleonic nature persevered after this decade, but the changes they went through would never be (and had never been, for that matter) as dramatic, vertiginous and angular as they were in the ’80s. The new decade was anticipated as another triumphant period for the band, but little did they know that some unexpected events would bring a traumatic dent into their trajectory. But that’s the subject for the end of this trilogy, which cannot come soon enough! Check out “Limelight: Rush in the ‘80s” at Martin’s website on this location.