Certainly not your typical hair-rock band, Whitesnake have been beckoning colossal emotions since 1978, rocking and rolling for the most part of the last 50 years, spearheaded by the vision of the band’s founder and singer David Coverdale. With a sound that have never veered off course from their heartfelt and stomping hard rock, blues-infused proposition, Whitesnake have been delivering high quality music for decades, including but not limited to their eponymous album which certainly propelled the band to the stratosphere in 1987.

Touring North America in support of their just released album – you can read our review here – Whitesnake hit the Hard Rock Live Event Center at the Seminoles Hard Rock Hotel and Casino in Hollywood, Florida last Thursday, in front of a jammed packed crowd showcasing a mix of all ages; eager to enjoy the songs which defined a whole generation of musicians and rock fans. 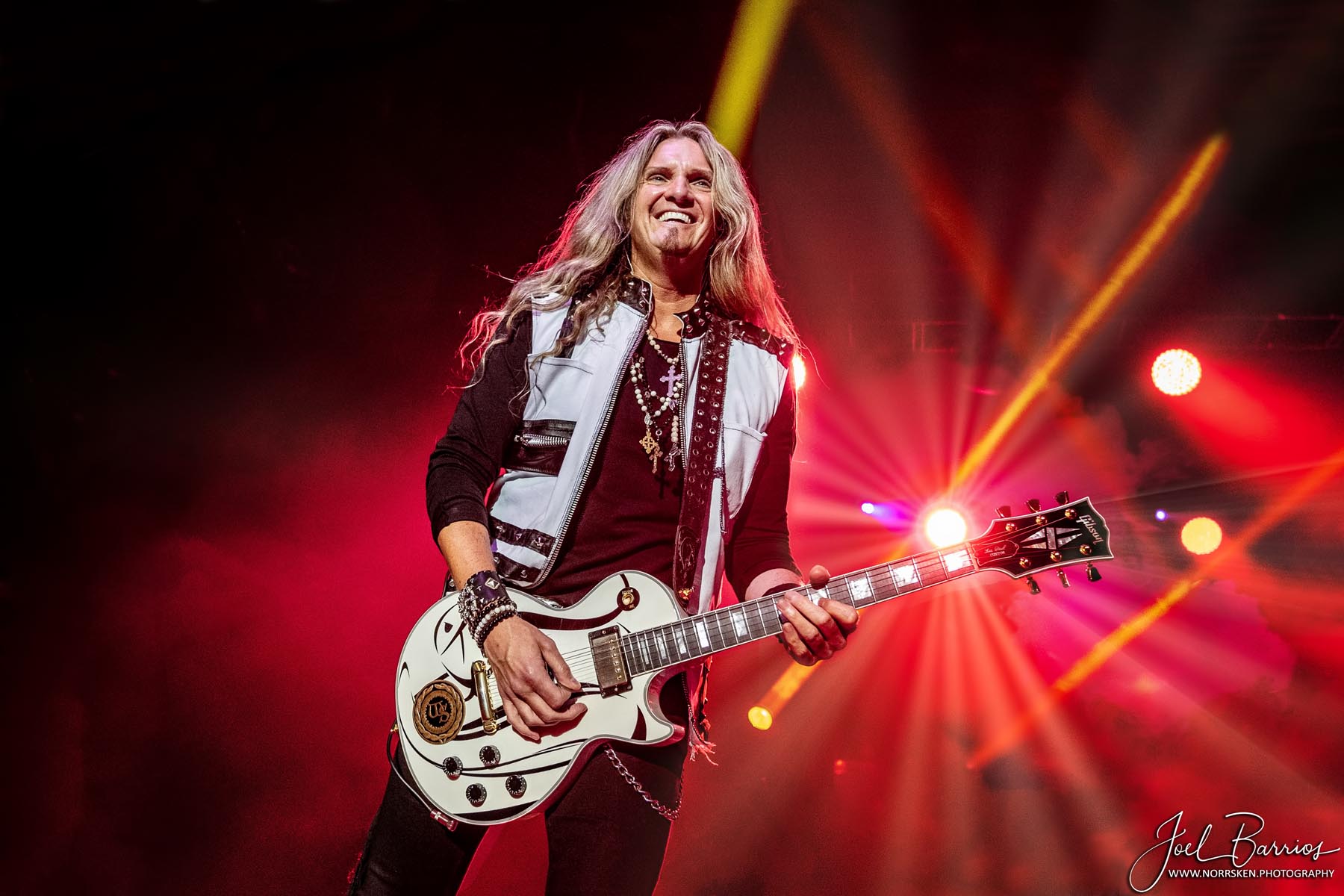 Let’s be honest: the success or failure of a concert by a 70’s or 80’s rock band relies largely in the music, particularly for acts from that era persevering in the scene on with only one original member. Nonetheless, David Coverdale – at 67 years old – still has nothing to worry about. After the last notes of Who’s “My Generation” faded over the PA, the quintet stormed the stage, with Coverdale radiating the commanding presence of a man who has done this for eons, moving around with the energy of a man half his age, smiling and waving at the fans, masturbating the mic stand and shaking his still imposing mane of hair. His voice holds up admirably well, yet a bit on the raspier side, something completely logical as father time is inexorable. Longtime guitarist Reb Beach and drummer Tommy Aldridge were joined on by keyboardist Michele Luppi, bassist Michael Devin, and guitarist Joel Hoekstra. Hoekstra stole the spotlight in several occasions, not only displaying his skills as a guitarist but also projecting a charming presence, frequently posing for the photographers and throwing pics at the audience which cheered thunderously, all the while his band-mates moved incessantly, leaning on each other and interacting with the crowd at the same time. 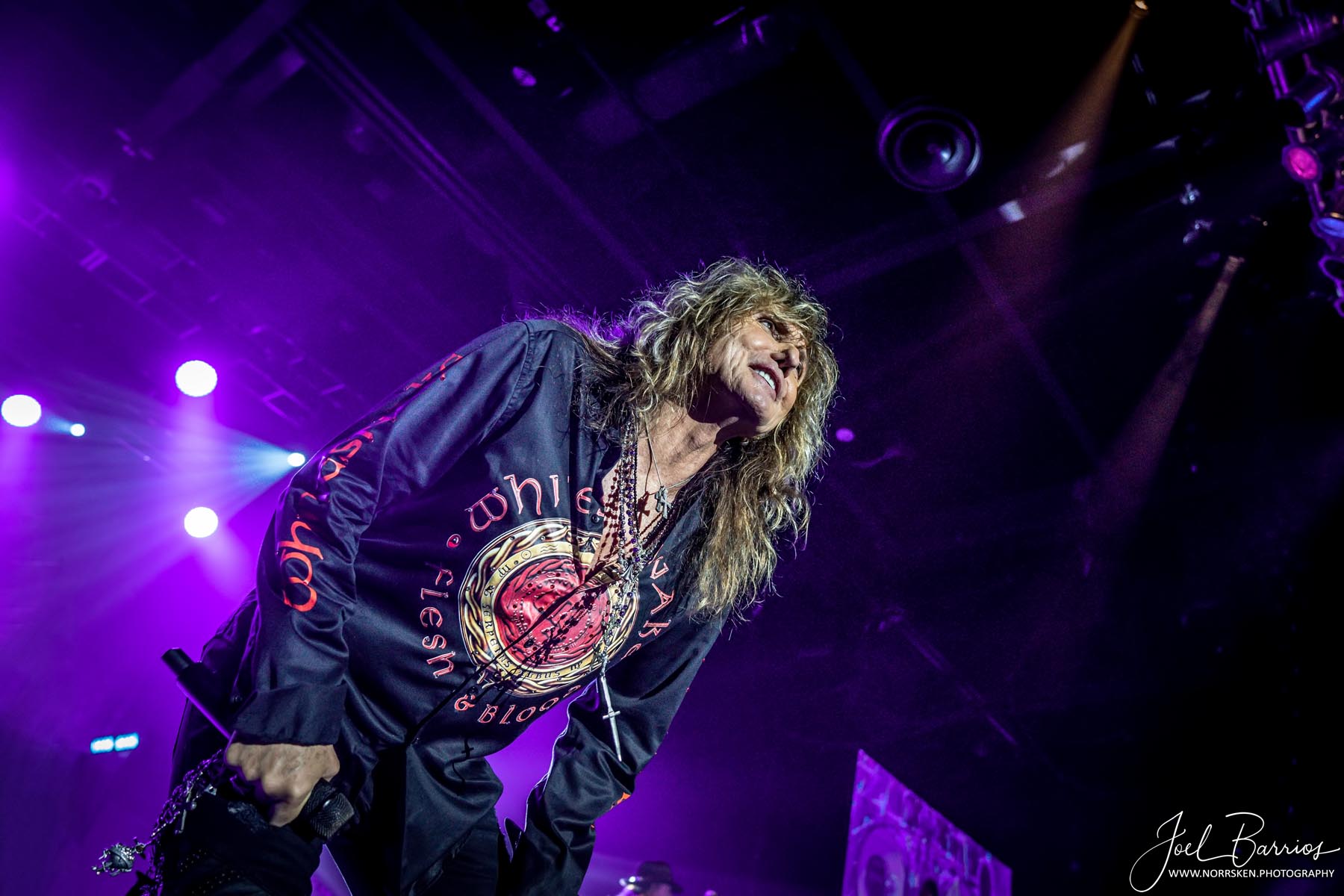 The set-list was mostly comprised by classics with a couple of cuts from the new album, the power-pop rocker “Trouble Is Your Middle Name” and the meaty and chorus induced “Hey You (You Make Me Rock)”. During their multi-platinum anthem “Is This Love”, Tommy Aldridge offered his customary three-minute drum solo, spiced up with a final section in which he tossed away his sticks to play with his hands. The highlights of the night came in the form of the trio of “Give Me All Your Love”, the timeless “Here I Go Again,” and the electrifying firing-on-all-cylinders encore of “Still of the Night.” The crowd sang along enthusiastically and applauded for a long time, even after the lights came back.

Overall an excellent performance, my only gripe – which I believe most of those in attendance share – was the really short nature of the night’s song selection, which is in really a minor thing. If you grew during the 80’s or just love superbly played hard-rock with the right dosage of hair-metal, don’t miss Whitesnake when they come through your town. You’ll be up for a memorable night.