If you are old enough to relate to the 80’s music, you most probably remember the rise of the glam-rock movement, and the days when the exaggeratedly flamboyant clothes, makeup and hairstyles dominated the rock n’ roll musical scene. And intrinsically associated to glam rock, names like Bon Jovi, Whitesnake, Def Leppard and Poison will inevitably ring a bell for you, and maybe will dust-off some outrageous memories.

Thirty years ago Poison released their sophomore album “Open Up And Say… Ahh!,” a much more polished and radio-friendly album, effectively representing the first step in the band’s maturation process, and generated a lot of buzz with their radio-hit ballad “Every Rose Has Its Thorn”. It’s been nothing but a long time since Poison last released an album of original material with Hollyweird in 2002, which arrived in a radically different climate, right at the collapse of the CD at the beginning of the digital era. Nonetheless, three decades later Poison is still alive and kicking as a musical entity, and their accurately labeled headlining-tour “Nothin’ but a Good Time” saw them taking the stage at the Hard Rock Event Center at Seminole Hard Rock Hotel and Casino in the Floridian Hollywood last Sunday, in what became the last stop of a lengthy North American tour.

Tour openers Pop Evil were not present in this last show, hence the first musical notes were carried out by rock stalwarts Cheap Trick, presented over PA as “the best fucking rock n’ roll band you’ll ever heard”. Still sporting three of the four original members – all of them way in their sixties –  (guitarist Rick Nielsen’s son Daxx now mans the drum kit in place of Bun E. Carlos) their setlist was a mixture of newer cuts like “Long Time Coming” off of their 2017 album We’re All Alright! with their massively well-known hits (“I Want You To Want Me,” “The Flame,” and  “Dream Police”), with Rick Nielsen frequently switching between blazing and eclectic guitars and throwing handfuls of colored guitar’s picks to the frenzied crowd. If during their first songs the band lacked a bit of energy they promptly upped the ante and closed their sixteen songs set without missing a note, with Nielsen playing a five neck guitar during “Goodnight Now” while moving through the catwalk allowing the fans in the first rows to mess with the strings of the two lower fret-boards.

While the stage changeover was underway I stopped for a couple of minutes to admire the announcement passing over the two gigantic screens located at each side of the stage, detailing the construction phases and the final look of the iconic guitar shaped hotel tower and resort which will be inaugurated in 2019. The Event Center at the Seminole Hard Rock Hollywood has always been a state-of-the-art venue, with one of the best sounding systems I’ve experienced – to the point you don’t need earplugs in the photo-pit, and your ears can actually discern the music being played while you are photographing the first three songs – and everything around it exudes a luxurious feel, turning the facility into the newest premier South Florida location for live concerts and shows.

After a few more minutes, the lights went down and a large video screen located behind the drum-kit started featuring cartoons of the glam-slam kings of noise heyday. Drummer and cancer survivor Rikki Rockett took his seat behind the drums amidst a thunderous clamoring coming from every throat in the fully packed house, and the remaining members appeared from the shadow – with Michaels coming in the last – to immediately launch themselves into the high-energy “Look What the Cat Dragged In.” From that moment on, the thrilling enthusiasm suspended in in the air revolved into a pure partying mood that rose twofold for the rest of the night. 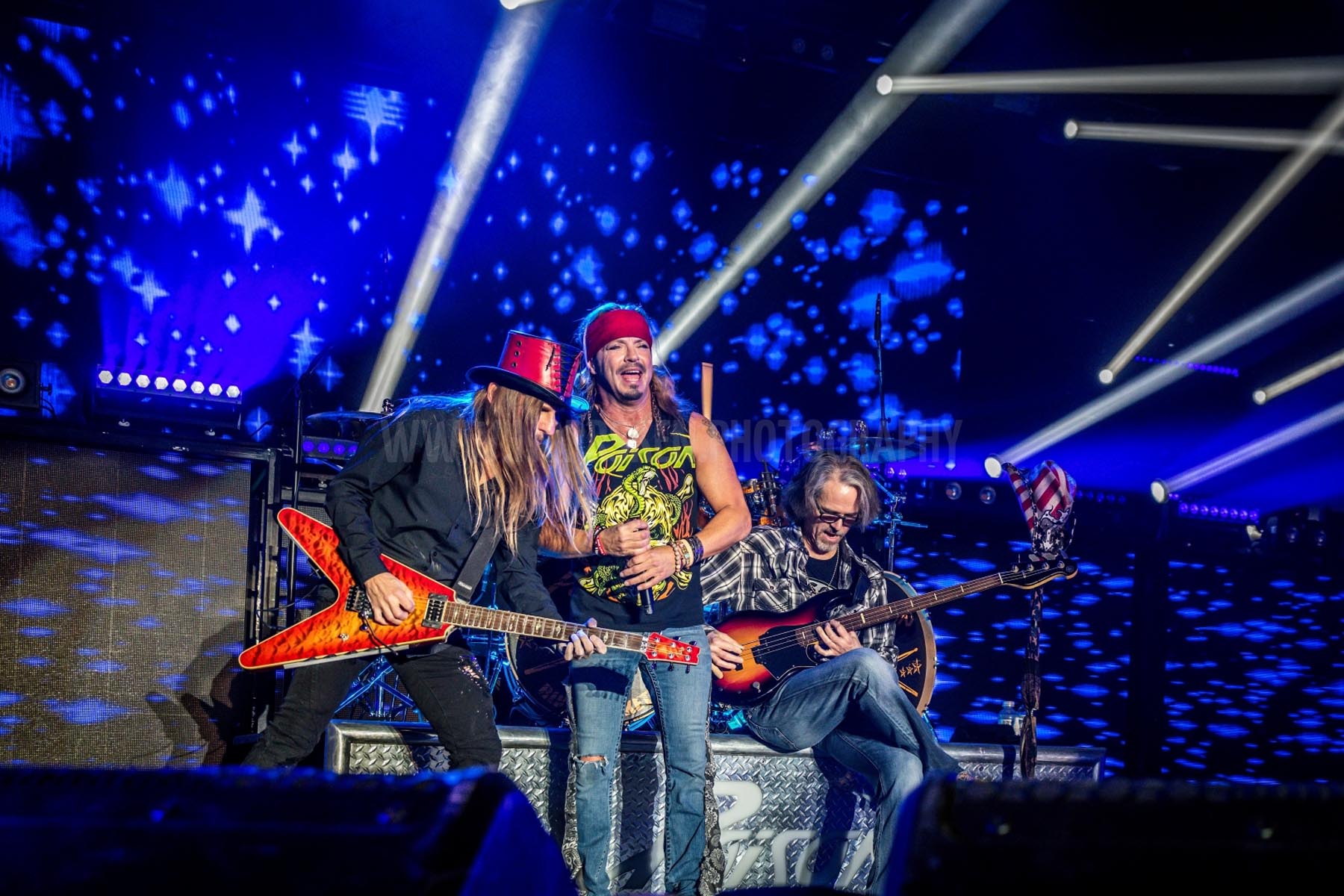 During an hour long set-list comprising some of their most iconic hits, and playing nothing newer than their successful – and my personal favorite record Flesh and Blood – Bret Michaels, C.C. DeVille, Bobby Dall and Rikki Rockett clearly demonstrated that even when they traded the spandex fashion outfits for flannel and jeans a while back, their vigor and abilities to engage the multitude and offer a genuine spectacle, making 20+ years old songs to sound as fresh as ever, remain untouched. From Michaels giving the crowd high fives to each fan gathering around the catwalk throughout the set, pointing to the most distant ones and genuinely enjoying every second, to Deville running here and there between his solos and raising his arms asking for the crowd to shout, and Rockett regularly tossing his drumsticks in the air and twirling them between the beats, all four members of Poison showcased an enthusiasm that was a joy to behold.

From the rock anthems of “Talk Dirty to Me” and “Unskinny Bop” to poignant ballads like “Something to Believe in” and a classic KISS song “Rock N’ Roll All Night,” interpreted as an encore in pure Poison fashion, they certainly proved that their slogan of nothin’ but a good time keeps driving them to deliver, with certain skills and showmanship that likely weren’t present in their times of MTV glory. Was it technically perfect? Probably not, but I doubt anyone cared about that. It surely was immensely entertaining and highly gratifying and by all accounts, that’s what you would expect from a Poison show. Well done gentlemen!