Whether you like Joe Bonamassa or not, you really owe it to him to say, “Thanks!” That’s because the suit-and-shades-wearing nerd is leading the charge to keep the blues up front and center in a time when pop and hip hop are dominating the airwaves and playlists of mainstream America… The blues, you say? Who cares about that anymore? Well my friend, the blues are the roots of rock and roll, and by bringing the blues to the masses in a way they’ll embrace in large numbers, Joe Bonamassa isn’t just forging a lucrative career for himself. He’s keeping guitar music alive. And for that, he deserves a bit of gratitude and respect.

A night of Bonamassa is predictably a night of lengthy guitar solos. It’s a night of nothin’ but blues, and while there’s always a risk of that getting monotonous eight songs in, it’s not a problem for Bonamassa, because Joe doesn’t just bring his guitar. He brings some of the best in the business out on the road, and their talents and opportunities to shine round out the onslaught of blazing, wailing guitar solos that sometimes seem to matter more than the songs.

Bonamassa played Red Rocks in Denver Sunday night. It’s an iconic venue that holds about 9,500 people and every one of them was there. I believe Joe said this was his fifth time playing the geological wonder, and it was the scene of his 2015 release, “Muddy Waters at Red Rocks.” He threatened to return next year for two consecutive nights. Judging by the size and enthusiasm of the crowd, he probably can sleep well without worrying about ticket sales.

Joe has his detractors. Some say he’s too derivative (aren’t we all inspired by others?). Some say he’s too white (a rather racist claim). And some say he’s too polished and slick (who wants a sloppy performance?). But regardless of what some critics might say, there’s no denying that Joe did something with his guitar you don’t see often. He had scads of women in the audience. And they were dancing to his solos. 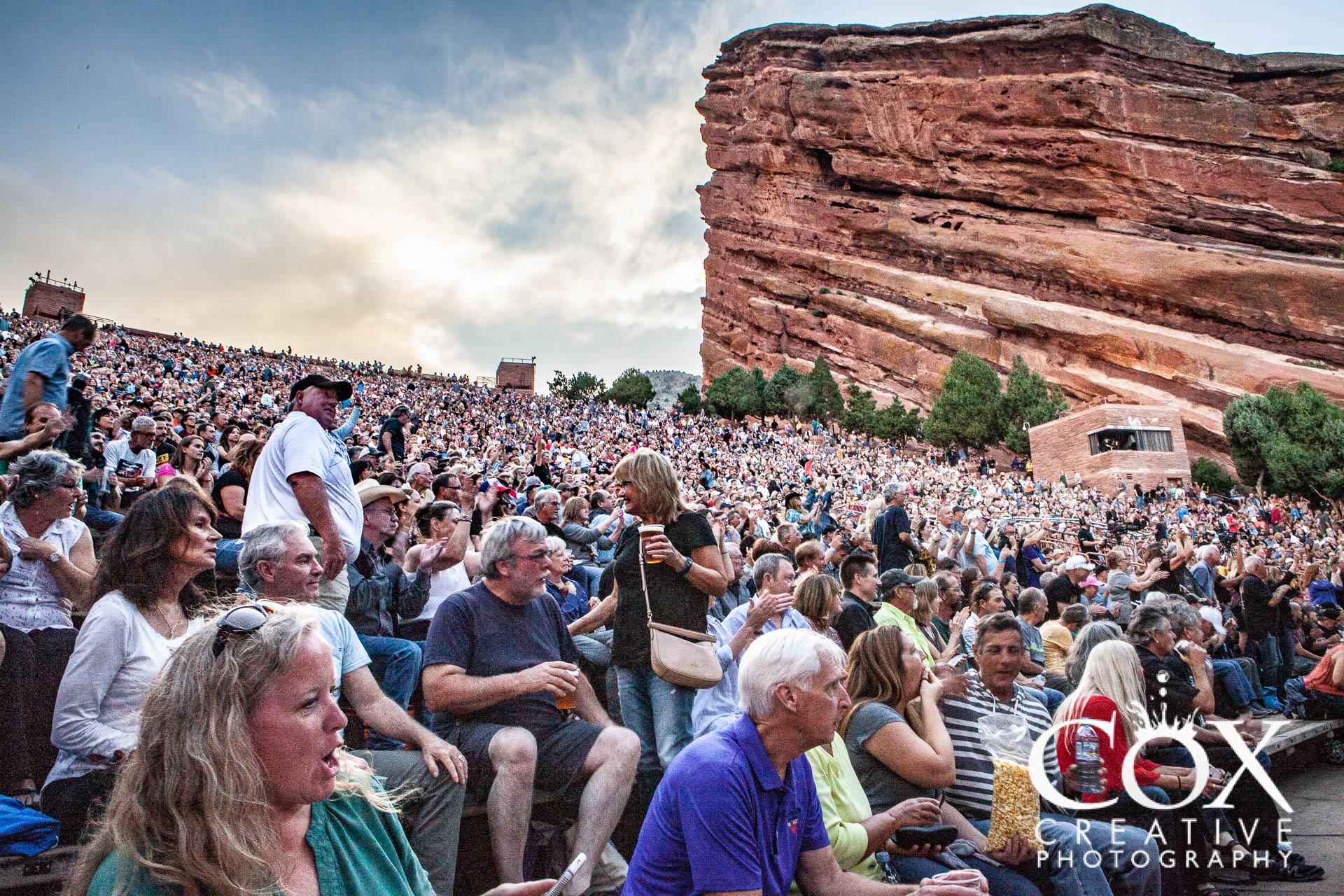 The audience at Red Rocks Amphitheatre enjoying the Bonamassa spectacle

Other than the occasional blast of wind, it was an almost perfect evening to be out at Red Rocks. The legendary venue is perched in the foothills of Morrison, Colorado, and the higher up you sit, the better view of Denver you get while the band plays beneath you. This particular band was killer, or what Bonamassa referred to as “The World’s Best Damn Band.” Nashville stalwart Reeese Wynans of Steve Ray Vaughn fame handled keys, with pulsing organ wooshes and honky tonk energy. He brought class and taste to every opening when he could shine. Another Nashville icon, Michael Rhodes, handled the bottom end on bass with a typically reserved stage presence but a rock solid performance. He was so fluid and funky on “Breaking Up Someone’s Home” that he carried the entire exceptional groove on his back, dragging the rest of the band along with him. The rest of the pocket of that song, and many others, was deftly delivered by Anton Fig, who played drums in David Letterman’s band for many years.

This band formed the bedrock upon which Joe stomped with his guitar. But if these guys were the guts, the horns and backup singers were the glory.  Lee Thornburg, who played with Tower of Power and Supertramp, is a rightfully a regular for the trumpet slot for Bonamassa. He and Paulie Cerra, who played sax and also sang surprisingly well, provided a welcome pop and punch to nearly every song. Last but certainly not least, were two backup singers who did little to remain in the background because of their synchronized dance moves and spectacular vocals.  Hailing form Australia, Jade Mcrae and Mahalia Barnes shimmied and swung in time while singing like rock stars when given their moment in the spotlight on songs like “Slow Train” and “Evil Mama.” I have honestly never seen backup singers add so much to a live show.

Bonamassa was, well, Bonamassa. Nearly every song featured a different vintage guitar being brought out, and every song served as a vehicle for his soloing, where he demonstrated creativity, touch, dynamics, speed, melodic sense and reckless abandon. “Sloe Gin” is one of Joe’s very best songs, with a singable solo that is played a bit different every night. It was the encore, and not only a big moment for the fans, but also for Anton Fig’s 15-year old son, who took over the drums halfway through to get a chance to play Red Rocks for the first time. In front of nearly 10,000 people. No pressure. He loved every second of it and demonstrated that his father has passed something down to his son in the drums department.

Joe Bonamassa and his band are a freight train that is coming through hard with no plans of slowing down. If you appreciate musicianship, fun music that you don’t even have to know to enjoy, and a celebration of the guitar, you best get yourself on board when they come to your town.

King Bee Shakedown / Evil Mama / Just Cause You Can / Self Inflicted Wounds / I Get Evil (B.B. King cover) / No Good Place for the Lonely / How Deep This River Runs / Breaking Up Someone’s Home / Slow Train / Nobody Loves Me But My Mother (B.B. King cover) / Boogie With Stu / Last Kiss / How Many More Times (Led Zeppelin cover)