The death of founding member and guiding light, Chris Squire, brought about a lot of change in Yesworld. As the continuing member in the band that carried the Yes name, he was the most consistent element of the band’s timeline. Following that tragic event, the existing Yes continued to do what they had planned prior to his death, and the new live album is the first release in the next stage of that legacy.

“Topographic Drama” was preceded by the pair of “Like It Is” live albums, that contained full recitals of classic Yes albums (arguably the classic Classic Era albums). With the momentum the band had built in this touring model, there was a confidence that they could recreate what many would view as two of the band’s most controversial albums: “Tales From Topographic Oceans” (an album whose name is often used as the nadir of Prog-Rock) and “Drama” (the first Yes album without Jon Anderson). Squire’s death didn’t stop this – he has already chosen his successor and so the tour went on. 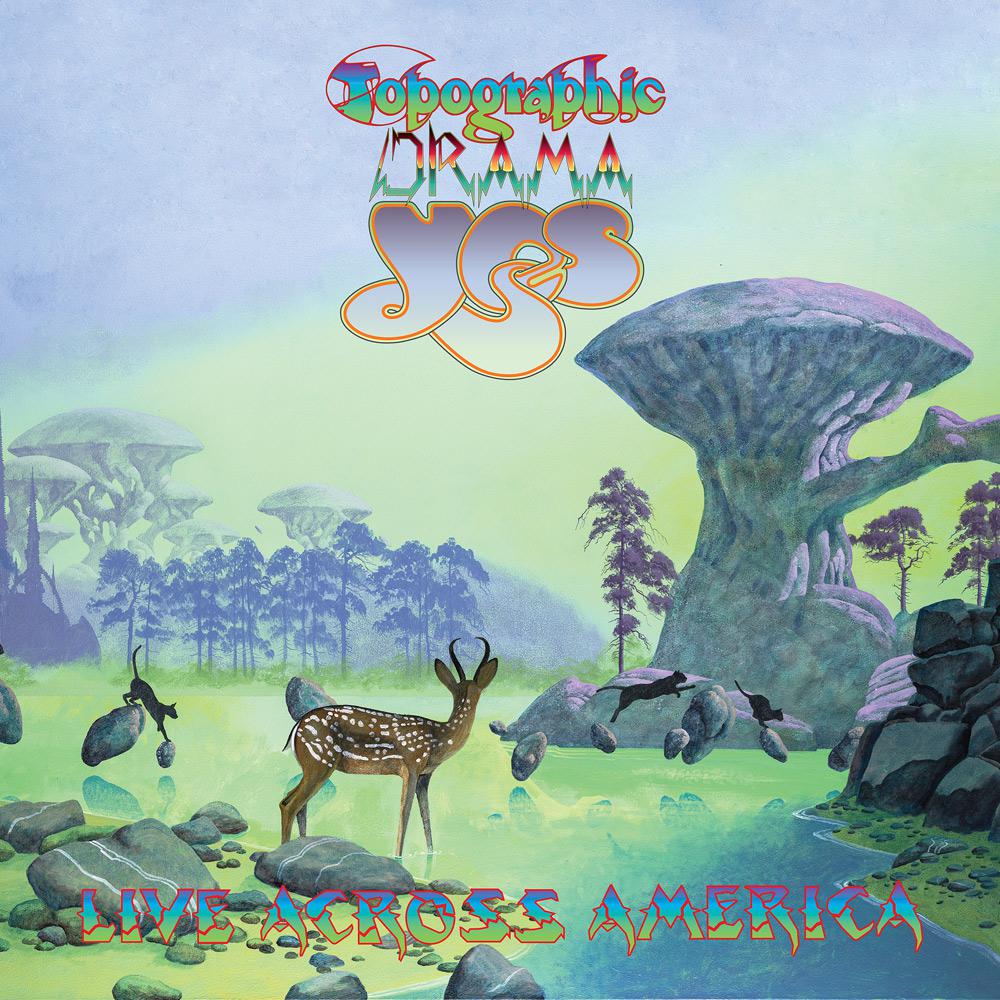 The album opens with 1980’s “Drama” album, played in full, in order. Except for the tour at the time of the album’s release, this is material that was understandably ignored on stage when Jon Anderson returned to the band. His departure in 2008 gave some of those songs the opportunity of a stage rebirth and this album, shows how good they are in a live context.

What an show/ album opener “Machine Messiah” is!!! The music is out of the blocks and running at full speed. The opening riff leads into the melodic verses, with Davison and Sherwood capturing that uncanny Horn/Squire vocal harmony. This song is a tour-de-force of time signatures, riff and reprises in the Yes tradition. Church organ, Howe’s guitar crunch and call/response vocals all combine in the build up to Geoff Downes keyboard solo, joined by Steve Howe playing in unison. The acoustic drop-down shifts the mood, to be overtaken by the reappearance of the opening riff, and the band leaping into the final section, powered by Downes’ Hammond and Sherwood’s bass, creating the space for Howe’s finale solo. Alan White’s drums (see later) push the song towards its conclusion with looping guitars and the crowd roars with appreciation. My question has been answered by one track – Is this good Yes music? It surely is.

From there the “Drama” album plays out in its eclectic way…. the standout keyboards and vocal of “White Car”, the Sherwood bass led “Does It Really Happen”, including a phenomenal bass reprise, and the Buggles dynamic of “Into The Lens”. “Run Through The Light” wasn’t featured on the original Drama tour but proves itself to be a capable live song on this album. Its fret-less bass and strange off-beat rhythms, are flawlessly executed – you feel it’s a song where the band are on their toes throughout, but it’s a note perfect version. The signature Downes keys and Howe guitar in the instrumental section that follows the chorus are played in a way that captures the full dynamic of the original recording, but brings it to a new place. The original “Drama” album was a compact 37 minutes long – here its stretches to around 40 minutes. But time flies and we reach the closing track “Tempus Fugit” – another song made for the Yes live stage. It has received live outings before with Benoit David on vocals and the band stride through its sections with confidence and urgency (shame the album didn’t include the version that saw Trevor Horn guested on reprising his lead vocal during this tour).

Disc 1 is rounded out with great versions of “And You and I” and “Heart of the Sunrise”. Both of these Yes staples are great versions that in my opinion are even better than the “Like It Is” takes. “And You and I”’s 3 part harmonies comes across really well and the guitar and keyboard sounds are far superior to the other recent live outings. I’ve gone this far without mentioning that, I understand, the drummer on most of this album is Jay Schellen, and not long standing drummer Alan White. First of all I will say – I didn’t realize that until after my third listen through – there is certainly no jarring change-over. A bit of online research suggests White plays on Machine Messiah, the second half of Ritual and the encore tracks – not that you would notice because Schellen ably fills the drum stool, on account of Alan’s back injury/ surgery. Back to my original point … this is just great Yes music! 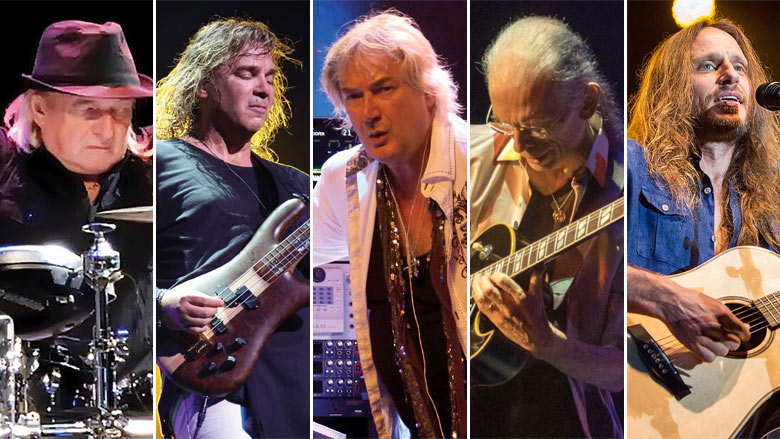 And so into Disc 2 and (selections from) “Tales From Topographic Oceans”. First of all I think the band did the right thing to capture the essence of that very long album by playing the opening and closing sides and the stand alone section from “The Ancient”.

The opening of “The Revealing…” is a delicate piece of music and Davison’s vocal is perfect blending with Steve and Billy. Jon Davison has a similar vocal range to Jon A but I’ve always felt he gets the balance right between respecting the legacy but stamping a bit of his personality on things. Of particular note on this track is how well Geoff captures the Wakeman keyboard parts – many fans have commented on the lower profile of keys on the original album, that is often attributed to Rick’s lack of love for the material – but he’s still a key part of the sound. The more textured approach Wakeman originally took is very well aligned with Downes’ own style and he adds exactly the right touch to the songs. Overall this is a more gentle and beautiful version of the track than, say, was played on “Open Your Eyes” tour. It really bursts into life around 4 minutes from the end with a stunning version of the standout keyboard solo from that track, while the rhythm section lock into a groove with Steve H before the “We move fast” section closes the song off.

“Leaves of Green” from “The Ancient” follows, extracting the most accessible elements of one of the more challenging pieces of music on the original album. Howe’s nylon string guitar part is smooth and supremely executed, with Jon D and Billy bringing just the right blend of vocals. If “The Revealing” was a lighter rendition, then the power and energy that has been held back bursts into life on “Ritual”. Like all of the tracks on the original album, this one pushes and pulls the listener through many moods… sometimes soothing… sometimes dragging you by the hair into battle! Kudos to the Sherwood/ Schellen rhythm section because this is challenging music and they bring the right mix of groove and space to the song. Once it has started “Ritual” powers through the track, the drum middle section followed by Howe’s redeeming slide guitar outro are up there with the great live renditions of Yes songs.

For me the album’s true stand out moment is the “Nous Sommes Du Soliel” section that ends this track – and the crowd know it too with spontaneous applause throughout the 25 minutes. The keyboard pad, adorned with some beautiful piano and Davison’s confident acoustic guitar gives Steve Howe the freedom to unleash his pedal steel lines. Again a nod of approval to Schellen for executing the drum section just as it should be. All in all this Yes band give “TFTO” the tribute it deserves and I expect these versions may even send people back to explore the original album again.

The two staple Yes show closers end the album: “Roundabout” and “Starship Trooper”. Great full band versions played with the pace and energy of the originals, adding the live edge the band have shown they can bring. The two tracks flow into each other. I am pleased to hear that, in the case of “Starship Trooper” some of the excess soloing of previous live versions have been stripped out!

And how can I complete a review without mentioning the Roger Dean cover? Check it out and see if you can spot the references to past albums… Drama Cats, Topo Rocks, Floating Islands… it’s a great montage of images in true Yes style. So do you need another Yes live album? Well I would say this is the best one of the Davison era and the first in what I hope is a long and productive post-Squire era. In short, to answer my question above: YES!