In a genre where breaking conventions is the status quo, there is a refreshing light in storytellers that embrace musical conventions as their core, and harness that flexibility in a way that gives them strength. Growing from a group of friends that met in music school, the composition and arrangements that allow Seven Spires to flourish are nothing short of breathtakingly cinematic. Predominantly a symphonic metal band, the four-piece act tackles stylistic components belonging to power, melodic death, and even black metal in the grandeur and majesty of their upcoming sophomore album “Emerald Seas.” A concept album that is the linear prequel to their debut, Seven Spires uses the power of narration to bring listeners on a journey fraught with excitement and brimming with poetic grace.

Following the same character that starred in their debut album “Solveig,” this second album is filled with drama and theatrics, the score to a fantastical tale of the band’s own making. Complete with an album cover portraying the protagonist of this story, “Emerald Seas” strives to be an immersive step into another world, one steeped in classical influences and the tragedy of Romanticism. The comprehensive musical education that the musicians of Seven Spires received shines clear in their focused composition, arrangements that are as inspiring as they are complex, rarely named emotions blossoming effortlessly from the musicians’ fingertips.

Balancing light and darkness, the star of “Emerald Seas” is vocalist Adrienne Cowan, capable of both operatic majesty and throaty growls that would have their place in even the most brutal death metal band. Her versatility brings incredible dimension to the album, songs rocking with near jarring volatility as she bounces between screaming and singing to match each song’s intended atmosphere. Fifth track “Unmapped Darkness” has a brightness to it reminiscent of a chilly fall morning, and when coupled with Cowan’s soaring vocals, the song’s opening would not be out of place in a Disney film. All of “Unmapped Darkness” is filled with a nearly dreamy hope, the voice of searching for something beyond one’s reach, but of true belief in achieving the impossible. More so than in “Solveig,” the emotions of “Emerald Seas” are infectious and palpable, and incredibly nuanced in layered harmonies.

The many facets of Seven Spire’s talents emerge in the subtleties of their many motifs, the themes that can be found buried in a number of different songs. Perhaps the most notable is the contagiously catchy melody of the album’s first single, “Succumb.” Steeped in the intoxicating mystique of love and desire, this track is an open invitation to sing along with a chorus that could move even the coldest of hearts, and stirs up a longing for the enchanting power of cinnamon, sweat and rum. Though this track appears sixth on the album, threads from “Succumb” are found woven throughout the epic closing track, “Emerald Seas.” Within this closing song, threads from many of the album’s defining moments find their reprise, though varied harmonization gives each passage a new and exciting flavor. Tying together a journey that comes with bittersweet memories, achievement, and dreaming, “Emerald Seas” delivers fitting end to a story of epic proportions. 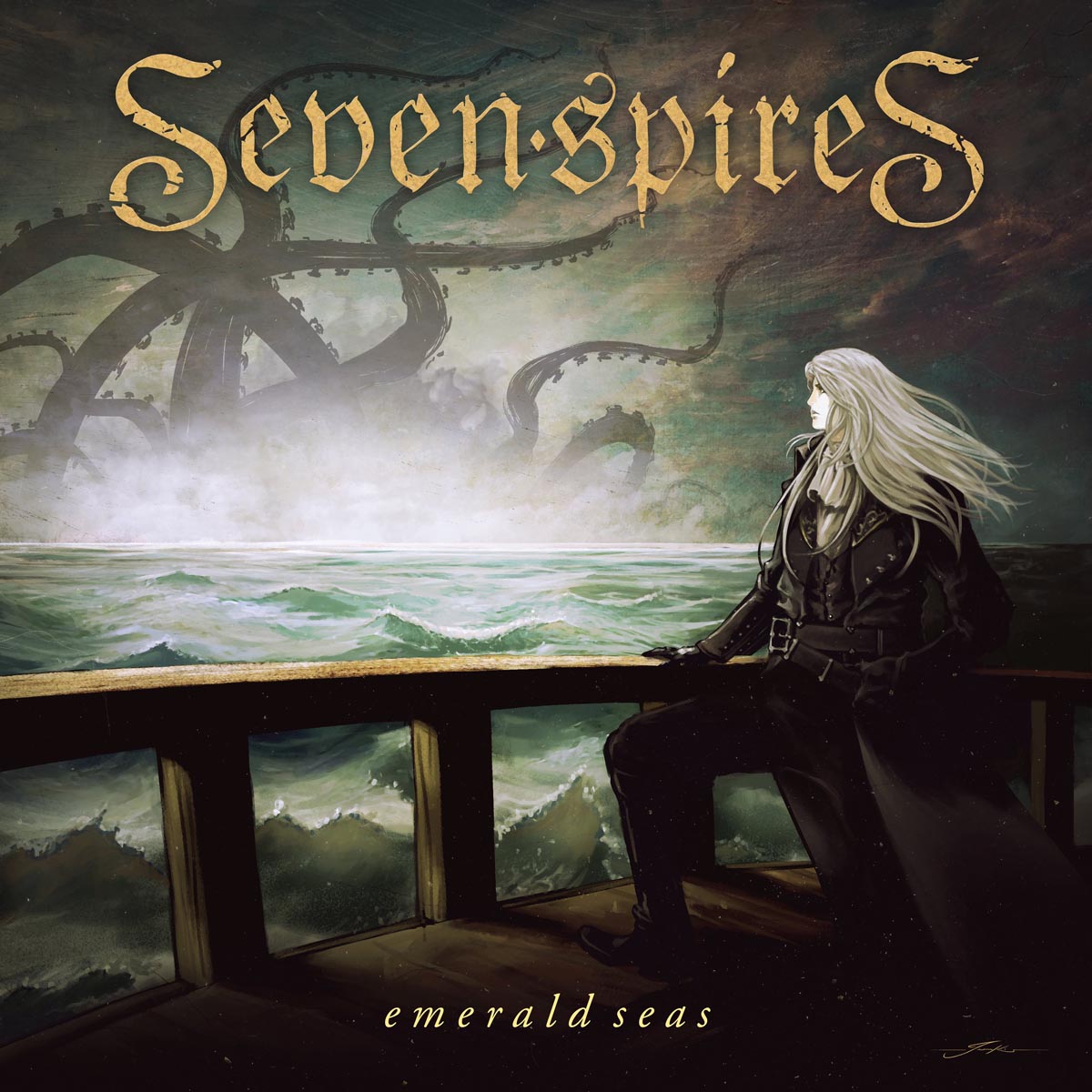 Guitarist Jack Kosto is the virtuoso responsible for the calculated infliction of passion, of fear, and of frustration expressed in both vocal-led and guitar-dominated passages. No matter hos strong his role in a particular song, the tapestry of emotions that he weaves is one that forms the backbone of Seven Spires’ emotional depth. Throughout “Emerald Seas,” he proves himself to be not just capable of incredible complexity, but has mastered a distinct style of playing that is emotionally refined and technically sound. It is a style that serves equally well on the poetic grace of “Succumb” as in the blackened depths of “Drowner of Worlds,” which is perhaps the most aggressive and raw track on the entire album.

Where the character of “Emerald Seas” goes on quite a literal journey, listeners are treated to a journey across sub-genres and styles. While the vibrant atmospheres of power metal uplift, symphonic arrangements shine in the grand skies of “Bury You,” while Cowan explores the tenderness of a near lullaby in “With Love From the Other Side.” Experimental more in its amalgamation of styles rather than the expression of these styles, Seven Spires showed that they can palate risk with a smile and come out on top.

This album is very much an experience that bears repeating for the sake of capturing the small details the writers have embedded throughout the epic adventure. The many layers and integrated style of arrangements lead to a “blink and you miss it” immersion that is irreplaceable. Seven Spires have truly captured the spirit of fantasy in their work, one which prospers from a background in varied musical education and a high degree of care given to the many sub-genres from which the album draws. Without a doubt, the cinematic “Emerald Seas” capture the human spirit in its most vulnerable state, providing a true portrait of a yearning heart and self-discovery.

Symphonic grandeur and the majesty of storytelling pioneer an album that is unafraid to take risks as it plays within the nuance of technical mastery. Evoking emotions of incredible specificity while bringing the listener on a journey like no other, Seven Spires deserve rapt attention as they grow wings and take flight as shining stars in the metal sphere.