The spitfire power-thrashers that delivered “Decennium” to the world finally return with their latest work, an 80s- inspired EP that showcases their successful efforts to grow, mature, and learn who they are as a band. Seven Kingdoms arrives with a sound that is brimming with confidence and polish, woven with a grace that fans could have hardly envisioned given the crushing speed and heaviness of their prior discography.

The amount of emotion and skill packed into their latest EP, “Empty Eyes,” elevates Seven Kingdoms far from just another American thrash act trying to pull ahead in an extraordinarily crowded scene. “Empty Eyes” is a graduation from the realm of uncertainty, taking four original songs and one cover song as an opportunity to show the world what both time and highly focused songwriting can do. Splashed with vibrant accents from the 80s hair scene, and drawing more heavily on the inspired lead guitars characteristic of power metal, Seven Kingdoms flexes their technical skills in a way that hadn’t been tested by a long series of thrash-influenced albums.

Leading up to the release of their second crowd-funded album, Seven Kingdoms’ power couple Sabrina and Camden Cruz offered up exclusive gym sessions and dinners, among other tempting rewards, to fans willing to put their money where their mouth was. This new approach to album-making was more than successful for the Floridian group, as they raised not just enough funds to cover their album, but to shoot music videos for multiple tracks. Nearly 300 backers pushed the group over and above all of the goals that they had set for their campaign, which is touted as merely the first step in a 3-step series of releases. Above all else, this funding allowed them to show test the waters with their new stylistic approach in a guarded, no-strings fashion.

Among the adjustments made to their style, “Empty Eyes” finally gives vocalist Sabrina Cruz the room to shine, with a spotlight that listeners never knew she needed. “Decennium,” as well as most of their discography up until this point, relied on her to be the supporting punch to grinding guitars and relentless drums. In this latest EP, Cruz takes center stage, allowed to truly soar rather than strain to scream along at breakneck speed. To have heard so little of her enchanting voice showcased in this way before is a testament to the self-discovery that went towards this band’s latest work. In “Valonquar,” Cruz takes the lead with unwavering confidence, using the slower pace of the track to her utmost advantage. The range and endurance of this more thoughtful, focused songwriting demonstrates a diverse range of vocal talents that add depth and dimension. Though her screams have not been abandoned entirely, their use is sparing and tasteful, mixed in careful balance against the instruments backing her. In a way that prior works had entirely failed to illuminate, “Empty Eyes” allows Cruz to be not just a front-woman, but a force of nature. 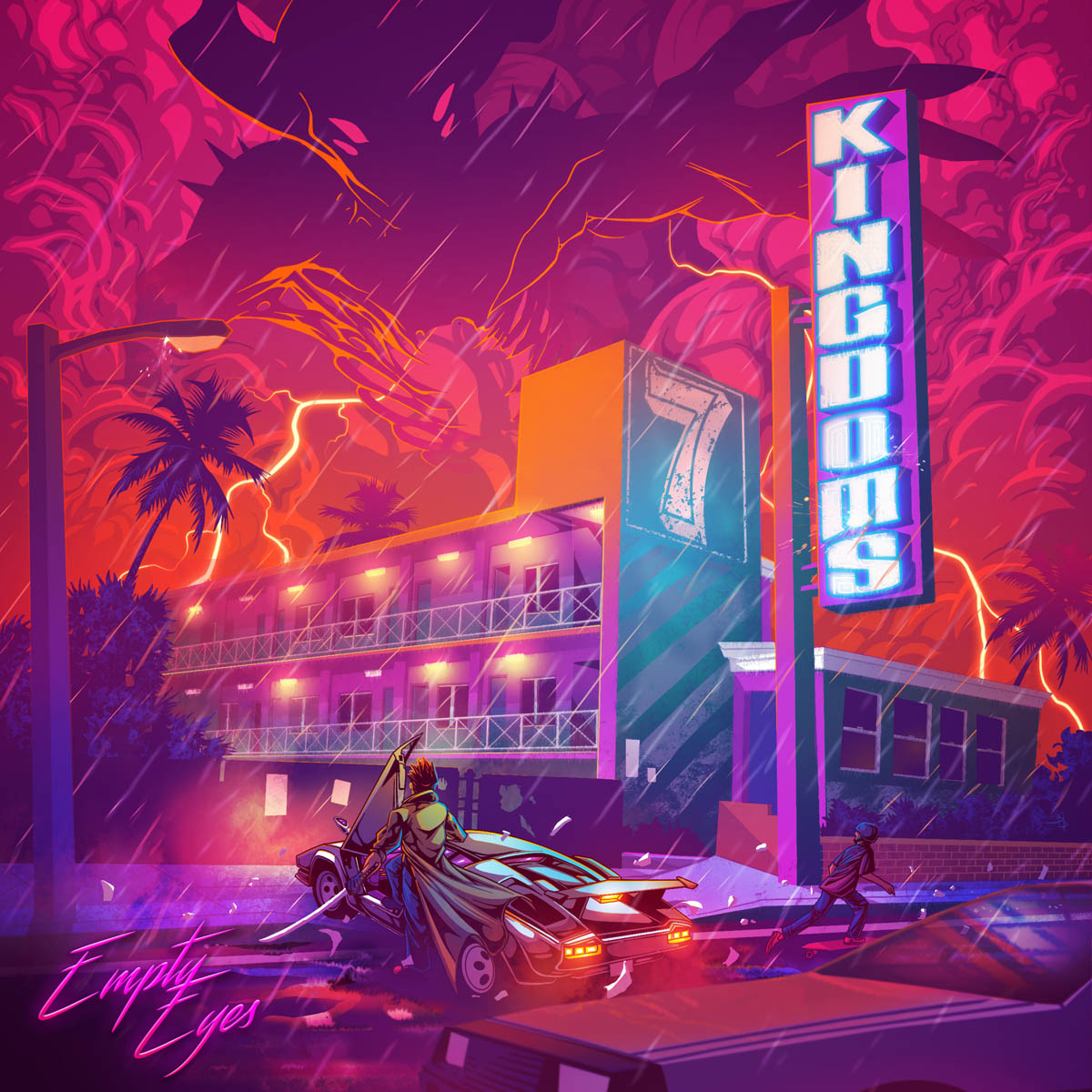 To both discard and reform the crunchy, speed-fueled guitar that had carried their atmosphere up until this point shows bravery and proof of considerable self-reflection. Guitarist Camden Cruz has always been relentless at the helm, but by slowing down in title track “Empty Eyes,” he proves himself in technical skill and musicianship. Instead of serving as a grinding engine to propel a track from start to finish, newer track “Monster” opens up the guitar to serve as a partner for the other instruments, rather than a cattle prod. Definitive flair erring on the grandiose of power metal, rather than the bite of thrash alone, draws the lead guitar out as a key player instead of a mere driver of speed. That’s not to say that the band has abandoned their heaviness: rather, there is evidence of a patience to develop songs that take varied approaches to a well-composed vision.

On a five song EP filled with experimentation and new direction, it was a bold move for Seven Kingdoms to take on a cover as vibrant as the treasured song “Barracuda” (Heart). Instead of just filling out space on an already sparse album, Seven Kingdoms deliver a jubilous rendition of a classic sound, and provide an extended opportunity for further Cruz’ to show off her once-veiled versatility. “Barracuda” is a cover that not just celebrates passion for music, but shows that Seven Kingdoms is no longer bound by the expectations of a given genre. This is a band that has finally found comfort in themselves, and though fans are teased by just a small gallery of their talents, “Empty Eyes” shows a band that is finally ready to embrace their true talents and allow them to shine.

Drenched in a wave of neon and self-confidence, Seven Kingdoms emerges with a tightly focused sound that illuminates both passion and technical skill.