Ever since the split with guitarist Victor Smolski five years ago, Rage founder/bassist/vocalist Peavy Wagner has been on a mission to take back his band. As if there was an immense amount of bottled..er, rage, Peavy has deployed a scorched earth policy, releasing three Rage albums with the newest lineup and one Refuge album (classic era Rage lineup: 1988-1993) in less than a five year period.

I recall a hot steamy night in Altanta at the Artmore Courtyard at the 2016 edition of ProgPower USA (Refuge was on the bill), when Peavy did not hold back about expressing his disdain for Victor, as well as his renewed life and vigor to return his band to its roots because he didn’t know how many years he had left. One thing is certain, Peavy has always been a prolific songwriter and Rage albums seem to pop out much quicker than one would expect at his age (having just turned 55 back on December 22, 2019). Now on album 22 (24.5, if you count the Avenger days and the Refuge release) over the past 37 years, and the band course corrected and solidified, “Wings of Rage” finally sees Peavy getting 100% back to the style that produced albums like “Black in Mind” and “Trapped.” On top of that, Peavy still pumps out quality material, sounds great and has a grin from ear to ear in nearly every live picture you see.

Flanked by the brilliant Venezuelan guitarist Marcos Rodriguez and Greek god of thunder Vassilios “Lucky” Maniatopoulous over the past five years, Peavy has another uncanny knack of surrounding himself with top notch talent, only this time its long time fans of the band. What better way to understand the vision of this criminally underrated, and often overlooked, German metal pioneer warhorse, than a couple of superior talented fanboys. Over the three albums released with this current lineup, “Wings of Rage” is by far the most engaging. 2016’s “The Devil Strikes Again” laid a solid groundwork, and Peavy released some very personal anger (check out “My Way” and “Back on Track“). 2017’s “Seasons of the Black” seemed a bit rushed and fell a bit flat in points, but still a solid release. Taking advantage of the 2-3 year gap to fine tune the writing for “Wings of Rage,” the band sounds like its fully in stride with the classic era of the band.

In what is a perfect 1-2-3 punch, “Wings of Rage” starts off with “True” and “Let Them Rest in Peace” and “Chasing the Twilight Zone,” which will leave the long time fans (such as your author) banging their heads with pride. The trademark riffs with the ultra catchy melodic choruses are all there, and although Peavy cannot sing in his circa ’88 high pitched style, he opts to slap a meaty dose of low grizzle that just adds to the heaviness. This is glorious pure fucking metal. 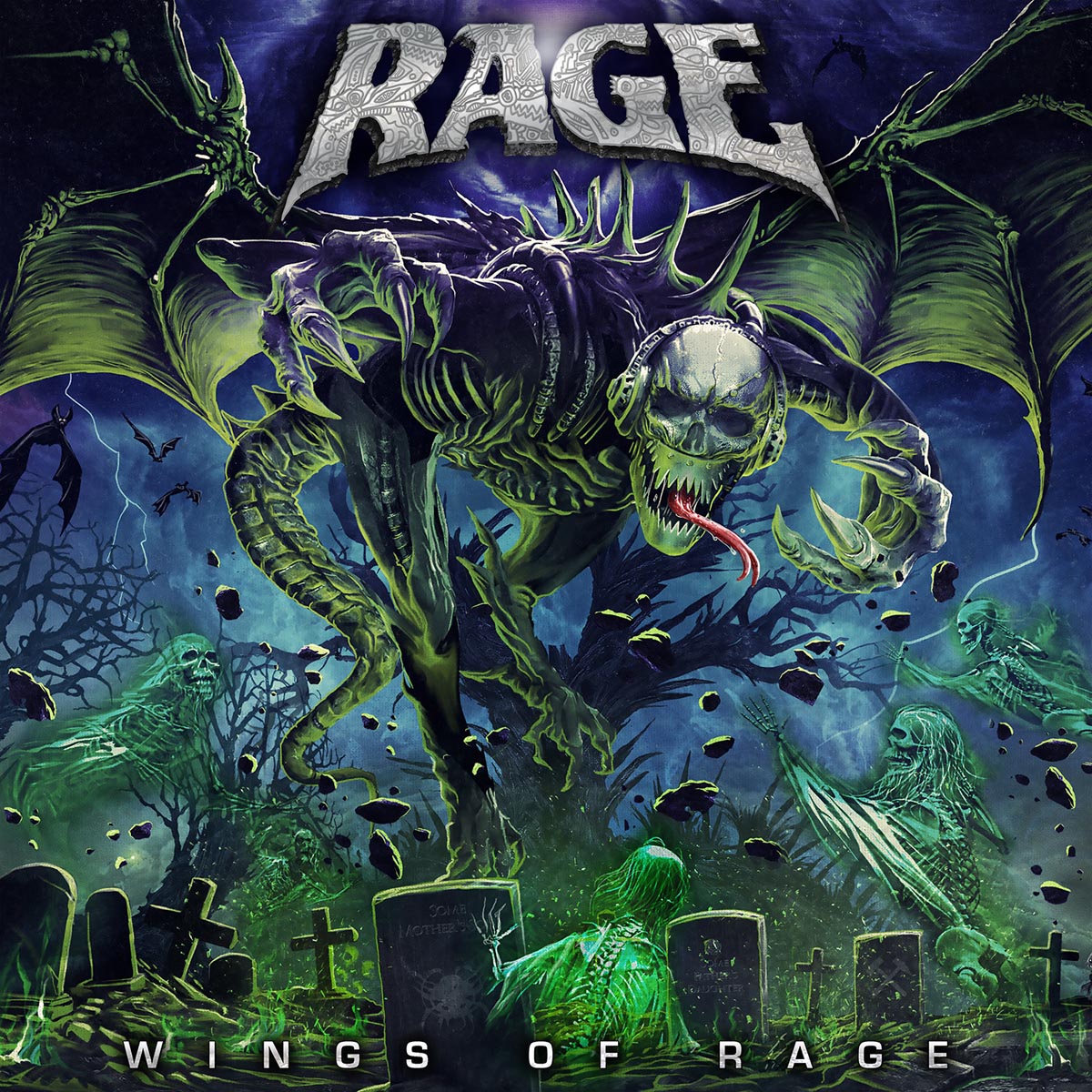 “Tomorrow” follows that up with an upbeat crusher featuring lyrics about never giving up and starting anew. One thing you can count on with Peavy is his ability to channel his own life experiences into inspirational lyrics, many of which have become anthems for dark days in my own life. The title track is yet another classic Rage tune. Then the curveball comes with the orchestrated “A Nameless Grave,” which instantly hearkens back to the 1999 album “Ghosts,” when the band sounded eerily like a masterful Savatage. This brings up another point for those fans who have overlooked this band – Rage has had a number of phases where albums could be grouped together in likeness, all very distinct and all brilliant – not to mention the band worked with an orchestra back in 1996 (“Lingua Mortis“), years before the style was popularized by, and often incorrectly credited to, Metallica.

Highlights on the rest of the album include the slow builder “Shine A Light,” the much heavier re-recording of the classic track “Higher Than the Sky” (originally released on the 1996 classic “End of All Days“), which has been rebranded here as “HTTS 2.0,” and the closing riff happy “Those Who Wish to Die.” Expertly recorded and beautifully mixed, “Wings of Rage” has it all for longtime and new fans of the band.

With “Wings of Rage,” the highly prolific Peavy and the rest of Rage have raised the bar yet again, releasing the first album truly worthy of the band’s classic days. The album represents the perfect blend of speed, melody, power and catchiness – a recipe that Peavy has patented for 30 years. Stronger than ever, Rage shows no signs of slowing, and for true fans, this is the best news ever. Hail to the old guys!

With a renewed vigor and burst of energy since the split with Victor Smolski, metal pioneer Peavy Wagner has been shot out of a cannon releasing his fourth album in five years (counting the Refuge release). "Wings of Steel" is easily the best of the newest era of Rage, coming even closer to the classic era of the band than the previous two albums. With the perfect balance of thrash, power and traditional, along with the catchiness that filled albums like "Trapped!" and "Reflections of a Shadow," the band gels better than ever before.