Once relegated to the underground, blackened speed metal band Midnight are unafraid to introduce themselves in both style and spirit on just released album “Rebirth by Blasphemy.” For any of those that might have missed the clamor regarding the band’s raw brutality, opening track “Fucking Speed and Darkness” provides a succinct summation of what has made Midnight so magnetic over the last eighteen years. Such a name is the very essence of a project fueled by influences from black and speed metal, but also heavy doses of punk rock and hardcore. The result is a final product that is unfiltered, heretical, and packed to the brim with both speed and darkness in equal measure.

Formed in 2003 by Athenar, Midnight has remained a one-man project through an increasingly impressive discography. With five EPs, three full-length albums, and more than ten splits and demos, never once did a commercial aura persist around experimentation with all things gritty and blasphemous. Eventually moving to create full-length albums with the release of “Satanic Royalty” in 2011, there has always been a strong tie to the explosive, electric roots that were the proving grounds of Athenar’s unprecedented, eclectic union between extreme genres.

“Rebirth by Blasphemy” truly captures the best and most exciting elements of multiple genres. There is the unfiltered bitterness of black metal in distorted guitars and Athenar’s gravelly shouts, speaking of hell, misanthropy, and vitriol so repugnant it would make a grandmother blush. Yet there is also an element of unfettered speed, a more polished approach to guitars that also seems to have come from the underworld, almost unholy in their persistence and technical dexterity. The pendulum on “Rebirth by Blasphemy” seems to swing between a celebration for all things unholy and a message of disgust for humanity. But  no matter whether Athenar seems to be set on declaring hatred or love for heresy, the music drives on at a punishing pace that leaves no time for doubt. Any moment taken to pause and gasp for air will leave a listener lagging behind on an album that pushes forward with driven intent.

Breaking free from the depths of purgatory is ninth track “The Sounds of Hell,” which is one of the most dazzling, speed-driven tracks on the album. Though Athenar imbues the track with his vocal anguish, it seems to be a song of triumph and exaltation for the darkness as it emerges. This is also a song where black metal influences are buried deep beneath the high pitch of a polished guitar, one that devours riffs with a ravenous hunger for something faster and more fiery. Steady drums keep pace with the guitars, backing off to make way for a dazzling solo that calls back images of 80’s rockstars in all of their brilliance. It may seem like a sharp contrast from the deep injections of black metal that suffocate the album in a perpetual frost, but their enthusiastic delivery makes for an irresistible appeal. 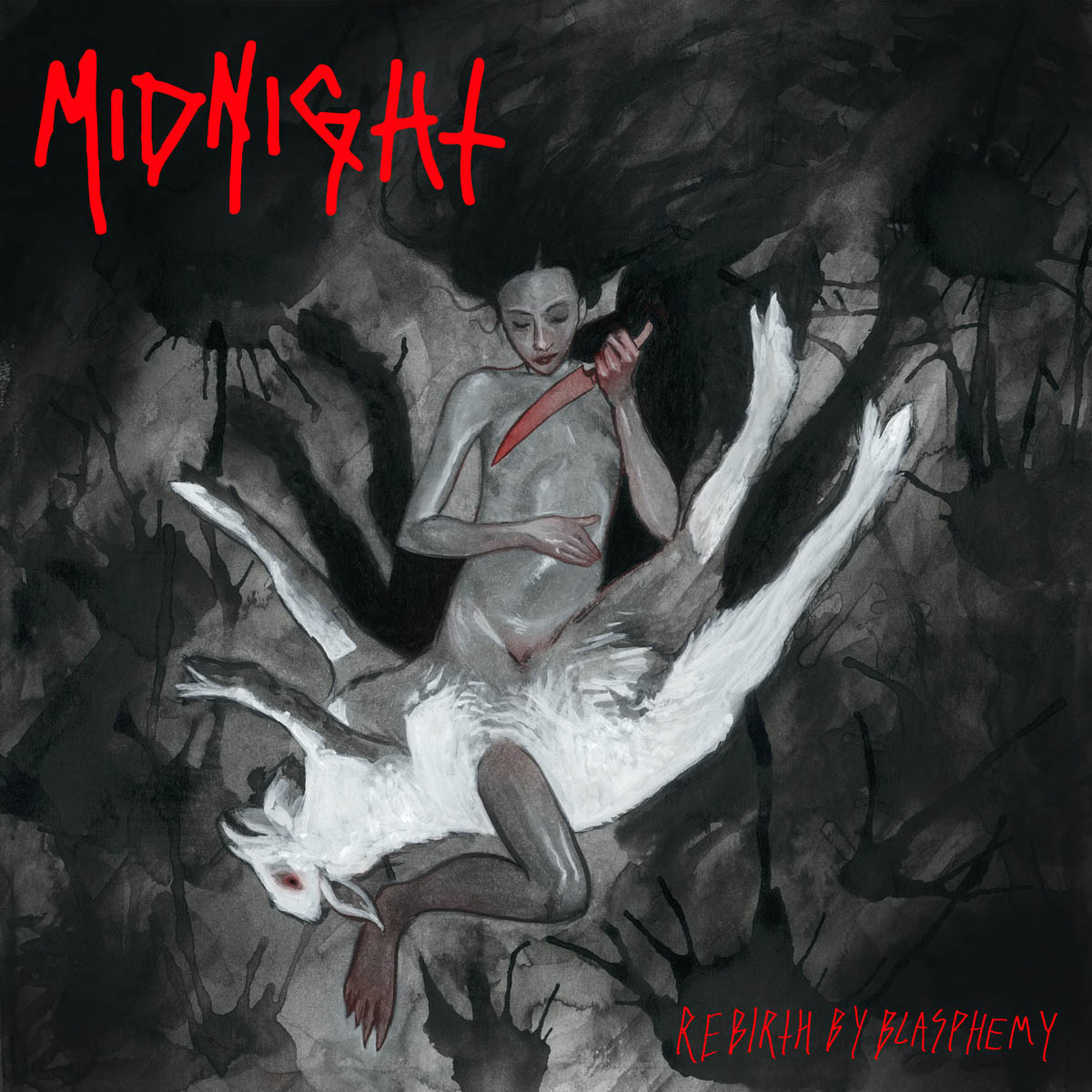 There is a sense of quality about the album, a sharper production in some songs over others, but all of them holding a certain authenticity to them. The rough edges are cherished without shame, including on title track “Rebirth by Blasphemy,” which is perhaps one of the darkest and hardest hitting tracks on the entire album. While “Rebirth by Blasphemy” has a rollicking, rocking atmosphere weaving throughout it, this particular track seems to dig just a bit harder into the extreme metal roots that colored Midnight’s earlier discography.  Guitars hover just outside of pure static for lingering moments, with a heavy bass muddying the track even further as Athenar pushed through an expression of emotion that hovers somewhere between apathy and contempt.

“Rebirth by Blasphemy” is certainly an embrace of catchy hooks and an almost comforting rock feel, but without shedding the darkness that has made Midnight claw its way up from the underground and into the blinding light of budding stardom. Despite a slight change in direction and a new feel for songs that draw listeners in with more than raw aggression, each track feels as though it is a genuine effort to explore and create. Never turning away from the black metal and punk rock roots that gave Midnight its solid footing and already extensive history, “Rebirth by Blasphemy” seems to indeed be a rebirth that embraces the drastic highs and lows that define each of the genres that Athenar draws from. Though there are certainly tracks that seem to have segments that falter in their connectedness, and the album feels more chaotic than comprehensive, it is in alignment with the expectations that Athenar has built up thus far for a project that is nothing but his unmitigated urge to create, and is certain to feel like home to his long-time fans.

A raw mixture of black metal, punk rock, and pure speed, Midnight pulls no punches with a release that is as aggressive as it is infectiously catchy. Sharp riffs contrast the distorted fury of extreme metal in an eclectic mix that is both sharply authentic and calculatingly chaotic