Piet Sielck’s flagship project and Sci-Fi infused power/speed metal powerhouse has seen its fair share of trials and tribulations over its more than two decades of existence. Originally born out of a desire of said guitarist, vocalist and studio engineer’s desire to resurrect his olden collaboration with ex-Helloween and Gamma Ray icon Kai Hansen (a partnership that both predates and paved the way for the existence of the former pioneering act), Iron Savior has naturally become a dominant force in itself among the broader German scene. To those who’ve been living in a bubble since the mid-1990s, the original version of this outfit involved both Hansen and former Blind Guardian drummer Thomen Stauch, forming a sort of super group meets power trio fold that found itself perfectly reconciling the melodic speed of Hansen’s Helloween input and Stauch’s thrashing Blind Guardian sound with Sielck’s Judas Priest-inspired old school heavy metal sensibilities, birthing an auditory shot heard round the world in this band’s 1997 eponymous debut.

While in the years since both Stauch and Hansen, along with a sizable collection of fellow instrumentalists, have resigned their posts aboard Sielck’s mighty starship, the aforementioned trifecta of influences has endured and resulted in a long-running series of space traveling adventure with very few bumps in the proverbial road. It could thus be rightly stipulated that while the early works including Hansen’s input proved to be the most iconic, Iron Savior’s successive repertoire has been an exercise in militaristic consistency, and its latest studio entry in Kill Or Get Killed doesn’t fall too far behind the masterful speed-infused action of Unification, Dark Assault and Condition Red. In fact, despite the recent loss of long time drummer and technician Thomas Nack, the entry of newcomer and speed-drumming enthusiast Patrick Klose has seen this band transition seamlessly from a somewhat more retro feel on Nack’s send off Titancraft and Klose’s trial by fire of a rerecording session dubbed Reforged – Riding On Fire to something a bit more modernized and straightforward.

Naturally when any storyteller has been dwelling in the same fictional universe for upwards of ten installments, the plot-line will see some recurring themes, and the story-line of Kill Or Get Killed almost perfectly mirrors the interstellar threat of an invading predator race that was Dark Assault’s story-line. Likewise, the musical approach leans a bit more on the aggressive side of the coin, though nothing quite reaches the degree of hyperspace thrashing as featured on “Seek And Destroy” or “Firing The Guns”, though not for any want of trying when considering the impressive array of heavy-ended speed metal goodness heard on the opening title song and the blistering yet triumphant “Heroes Ascending”. This sense of punchy, riff happy songwriting is mirrored in more moderately fast anthems such as “Stand Up And Fight” and “Roaring Thunder”, being a bit too chunky and massive sounding for the ultra-melodic fair of Unification or Condition Red, yet also featuring some of the massive vocal arrangements and generally polished yet nasty growl out of Sielck that typified those albums. 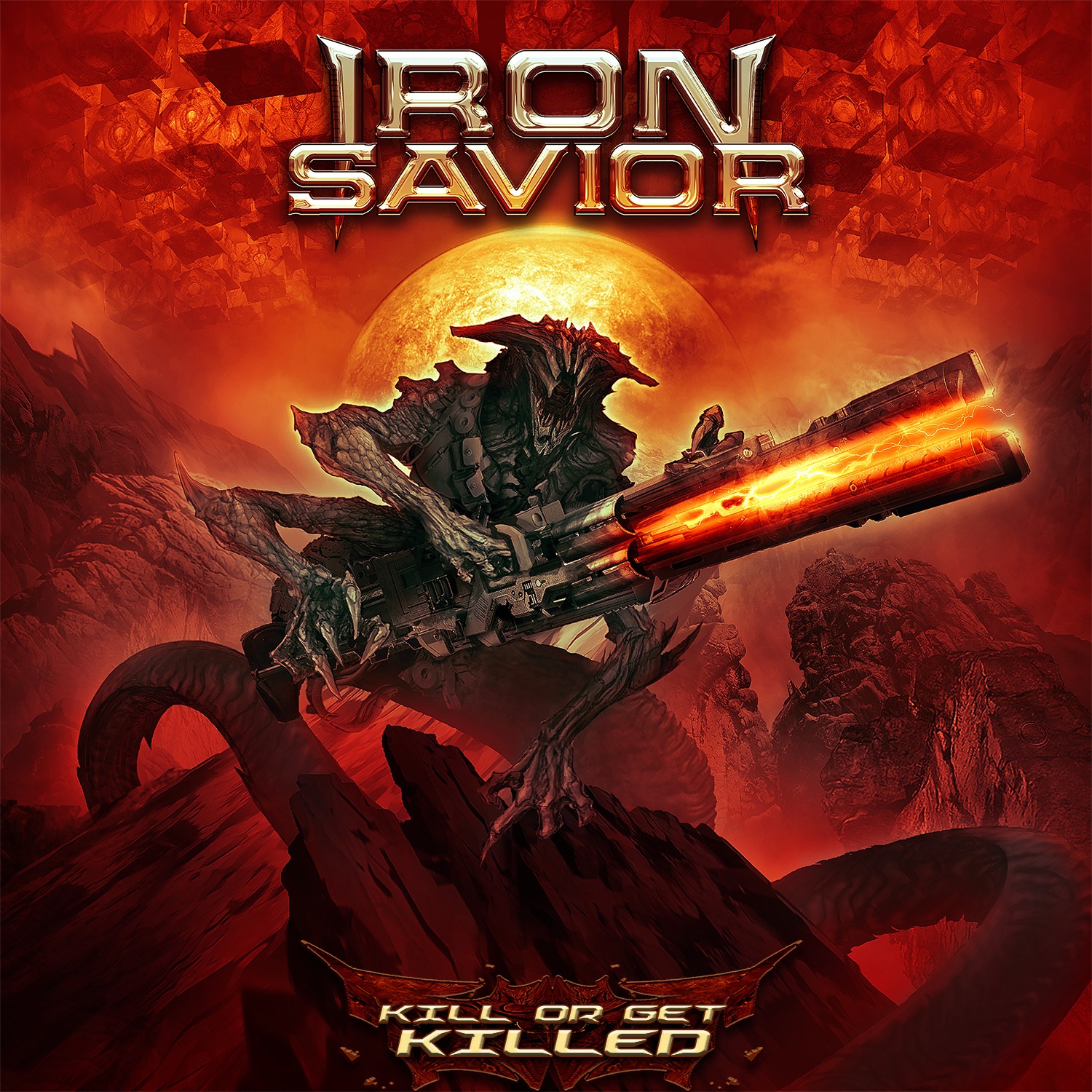 “Kill Or Get Killed” Album Artwork

In spite of things varying a fair bit in terms of velocity, the overall picture painted is a one of consistent battle, eschewing the concept of balladry or periods of respite that were actually not absent to this band’s seminal works. There is a couple more mid-paced rockers that lean back to the “I Want Out” format in “Never Stop Believing” and the quieter verse into a bombastic chorus duality of “From Dust And Rubble” that could almost constitute overt throwbacks to the 80s if they had a less stacked production quality. But even these songs and the slow-paced epic nod to Dio-era Black Sabbath with a late 80s Judas Priest twist “Until We Meet Again” function more as an overt iron gauntlet-clad fist to the skull given their musical presentation, not to mention the generally wild Tipton/Downing meets Andre Olbrecht lead guitar gymnastics provided by Sielck and Kustner throughout the entire album’s duration, from the reaming, Painkiller inspired whammy bar dives to the massive Queen meets Iron Maiden harmonies.

As with any Iron Savior offering, the greatest challenge that it poses to either the newcomer or the stalwart follower since the late 90s when they first burst onto the scene, is forcing oneself to skip around, let alone pick a favorite. They are just one of those bands that take the concept of consistency and just raise it to an art form, and much like modern competitors such as Paragon, Mystic Prophecy, Brainstorm, or even their 80s forerunners Running Wild and Grave Digger, take pride in keeping the German brand glistening from one album to the next. Having said all of that, those nostalgic for the period from ’97-’02 when this band was at their creative peak will find the highly catchy and driving anthem “Sinner Or Saint” the leader of the pack, not to mention chock full of musical references to said era constituting a full on walk down memory lane. No matter who comes and goes in a supporting role in Iron Savior’s coming future, as long as Sielck still has his voice, guitar and sense of adventure, this ongoing saga will continue to yield new classics to keep the power metal world on notice.

“Kill Or Get Killed” Track-listing:

One of the great powers behind the German power/speed metal throne returns with another installment of his grand Sci-Fi epic, unleashing a cosmic bombardment from a familiar hybrid of Judas Priest, Helloween and Blind Guardian brand lasers