The very first sentence of any good AOR album review should include a mention of Iron Maiden. Are you confused? Good. Still confused? Perfect. Way back in the golden age of meaningful rock and metal, a few months after Maiden’s “World Slavery Tour,” a fiery festival of mummies, lightning and bird masks, the band was enjoying some much-needed R&R, to forestall the sensation of “Wasted Years.” After a few months of leisure, the industrious Nicko McBrain had enough of practicing for COVID-19, and rounded up Adrian Smith and a few other mates for some jamming. The end result was a one-off performance at the Marquee in London, as “The Entire Population of Hackney,” with a special encore featuring the other 3 members of Maiden. Two of the musicians working with Adrian had also been working on a little number called, “That Girl.” The astute Eddiephile will recognize the tune as one of the B-sides from the “Somewhere in Time” singles. As it just so happens, this was around the same time Adrian’s other mates were putting together a little AOR band called FM, and once they found the tremendously talented Overland brothers, they put out their debut album, which starts with… guess what? “That Girl,” albeit an intentionally different arrangement than what we hear from the “Somewhere in Time”  sessions. Of course, it stands to reason that this time working on melodic rock material with future members of FM is what planted the seed for Adrian’s subsequent departure and formation of his ASAP project, which produced an AOR gem in the album “Silver and Gold.”

Now class, if you’ll be so kind as to close your Book of Heavy Metal, and refer to your 2020 Frontiers Music Catalog, and go to the “F” section, you will note the band FM is alive and well with the original vocalist Steve Overland, and has just put out a new record entitled “Synchronized.” Please do not take today’s history lesson to imply FM has been in hiding these last 30 years (Spinal Tap, in the “where are they now” file). In fact, FM has put out some real gems, although 1989’s “Tough It Out” was probably the most successful album since their 1986 debut album. Since the band’s 2007 reunion, they have been a productive and melodic machine, generating six additional records not even counting today’s “Synchronized” album. Also important is that the founding Jupp/Goldsworthy rhythm section remains in place, as well as the keys of Jem Davis, who has been with the band since the early 90s. With so many old-school bands actually being reanimated husks of their former selves (with one original member), it is refreshing to know that for better or worse, this is absolutely FM, assembled in formation.

Without further ado, let us look at the record itself, or even better, check out how it sounds. The title track comes in with heavy guitars and lush synth evoking feelings of a tidal wave of power metal with a touch of retro 80s flair… but out of nowhere a funky blues-based groove takes over and the inimitable soulful vocals of Steve Overland join the party. The call-and-response gang vocals and the brass section keyboards in the chorus, combined with fusion guitar leads collectively paint a jazzy/bluesy/funky rock mix-up, decidedly a degree removed from traditional AOR, and certainly from vanilla rock and metal.

The second track, “Superstar,” with its jangly steel string acoustic guitar strumming, over contemporary keyboards and percussion paints an adult-accessible rock picture. Where “Superstar” has a minor key feeling to it, the next track “Best of Times,” is definitely the same texture but in a major key. With the low-gain electric guitars and church organ keyboards, and more laid-back drumming, we remain in the adult-oriented “dad rock” category. “Ghosts of You and I,” powered by pianos and a modern R&B drum machine, continues to settle the album into an apparent trajectory.

The fifth cut, “Broken,” steps up the game just a bit, with some cool drumming patterns, keyboard bits and bass lines. While still being anything but metal, it’s still got a fun energy to it, think like Toto’s “Rosanna.” This is followed by “Change for the Better,” which has a groove like later Night Ranger with a touch of something akin to Don Henley or Mr. Mister. “End of Days” opens with a U2 sort of feel, and not just because of the “Edgy” guitar delay. However, once the verses start, it darkens quite a bit, before bringing us to an unexpectedly beautiful lush chorus, like something from a Neal Morse project. Speaking of Brother Neal, the next song is “Pray,” which aside from the obligatory church organ, has an old-school blues rock character, right down to the busy tambourine action. Did we already mention Mr. Mister? Because the next track, “Walk Through the Fire,” definitely has some “Broken Wings.” With a bit of “Big Trouble in Little China” keyboards for flavor, and some later Thomas Dolby drum programming. 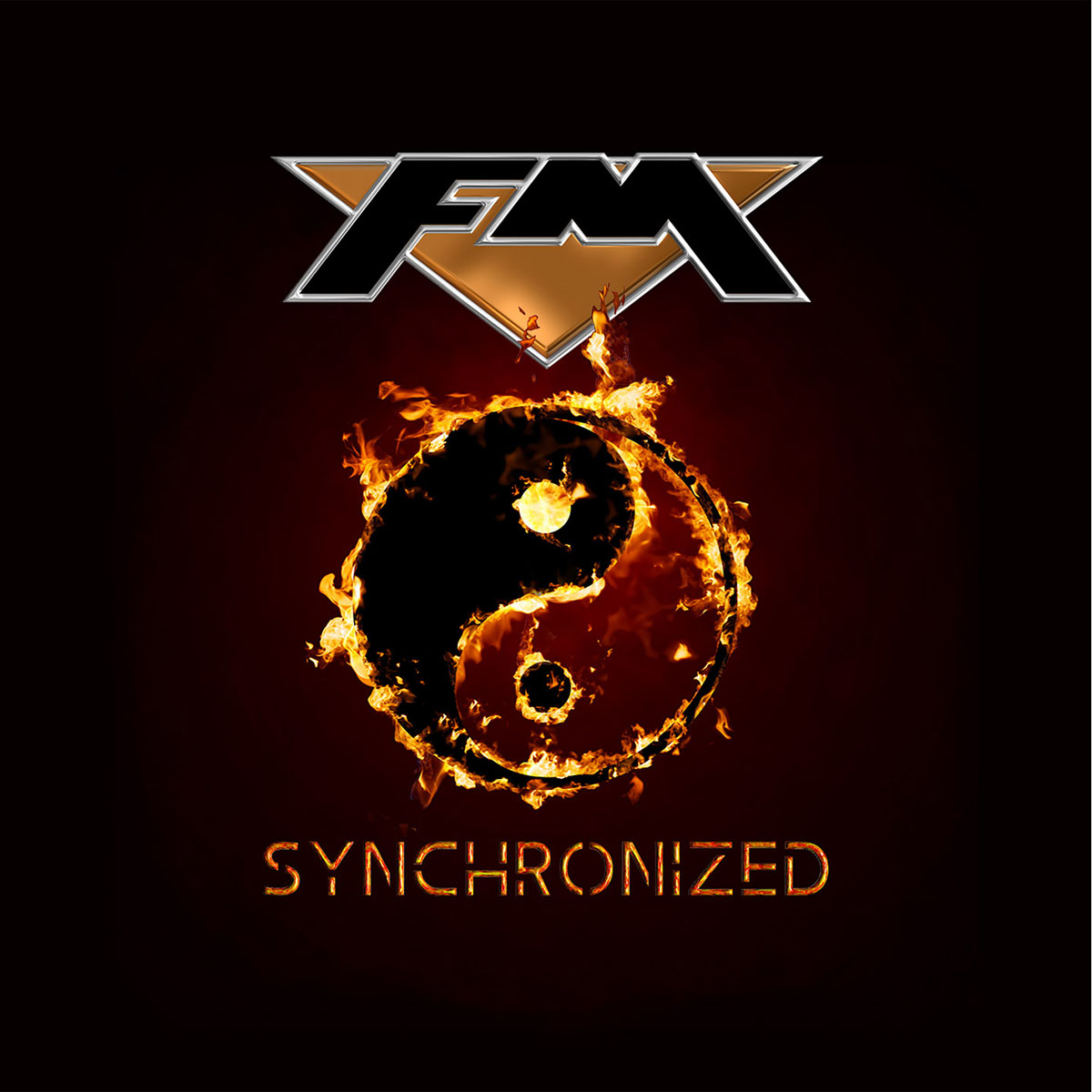 The song “Hell or High Water,” has that Jack Blades sort of rocker character one might find on a Damn Yankees record, or Night Ranger’s “Neverland.” Next up is “Angels Cried,” coming in loud and proud with slide guitar, and country western drumming and piano, makes no secret about its old American Roadhouse DNA. The ultimate track on the album, “Ready for Me,” is such a boilerplate rock and roll song, it could have its picture next to “Rock and Roll” in the encyclopedia, alongside Bob Seger and Huey Lewis.

We try to eschew terms of music snobbery like “derivative,” but there is no doubt FM’s “Synchronized” album is the sum manifestation of five talented veteran musicians coming to the recording studio with 250 to 300 combined years of rock-and-roll listening pent-up in those brilliant craniums. There has been much original brilliance in previous albums, but this album has more than the recommended daily allowance of “been there, done that.” The playing itself is great, and Overland’s vocals remain nearly as strong as 30 years ago. However, two factors impede this album realizing greatness: the uninspired writing, and the generally unexciting softness of the performance. Just take this week’s release of One Desire, as just one example, of a melodic rock/metal act with a bit of AOR DNA, delivering an inspired and diverse collection of songs which are, well, exciting. Interesting. A dynamic interplay between the heavy and the not-so-heavy. Much of this could also be said for Overland’s other recent project, Groundbreaker. Truly, the listener gets more mileage (Miles Per Groundbreaker?) from Steve’s voice on that project, than on this new FM record. It just seems like One Desire is background music for kickboxing, whereas FM is background music for staining the deck or tending the charcoal BBQ. Perhaps they are just different tools for different jobs, but one does seem more exciting than the other.

With these caveats out in the open, please do not misunderstand, this is still a good album on the whole, depending on what you are looking for. Maybe you’ve put in crazy hours at work, you are finally home on your black leather couch in your music room with a well-mixed cocktail, and just want to put something on that won’t offend the senses. FM’s “Synchronized” will have your back. The album has just landed this past week, and can be found at your favorite online retailer, or your local record store if they have been allowed to reopen. They would probably love some customers.

FM remains one of the original heavyweight contenders in the AOR world. Old-school lineup plus old-school songwriting makes for a compelling record, for FM fans and for melodic rock fans in general