Wait a minute – you say Todd Rundgren has been cranking out great music for some 53 years?!?!?!  How can that be?  It seems like yesterday that we were swaying to “Hello It’s Me.”  Or power-popping to “Couldn’t I Just Tell You?”  Or progging to the intricacies of mid ‘70s era Utopia.

Who knows how many people The Runt has influenced over the years (it’s gotta be huge).  But we know of one in particular:  Fernando Perdomo, the wonderful guitarist who’s performed with Dave Kerzner, Jakob Dylan, and too many others to count.  And he’s more than made his bones as a producer.

He’s an admitted Beatles freak—but he’s also a Rundgren aficionado (although it should be noted that Todd has been recording much longer than Fernando has been alive).  That stood him in good sted in 2015 when he remixed “Collide-a-Scope” – a production that won a competition judged by Rundgren himself.

So it comes as no surprise that Fernando’s latest release is “TRGTR” (Todd Rundgren Guitar).  A tribute album, yes.  But more than that—it is Perdomo’s instrumental interpretations of 16 Rundgren songs. They range the entire length and breadth of his career, from the groundbreaking power pop of The Nazz from 1968 to a piece that will be released this summer.  Perdomo says the album list came from requests and his own desires—hey, it’s his party and he’ll play what he wants to, right?

And he does almost all the playing—guitars, basses, keyboards, drums (except for two cuts).  He produces.  This is his dream album, and he’s not sharing (although we should mention the contribution of drummer Eddie Zyne on “Collide or Scope.” The legendary stick man died in November 2018, a few years after cutting this track).

About a third of the album would be considered “classics,” songs that pretty much everyone knows (“Hello It’s Me”, “Open My Eyes”, etc.).  The rest are deep cuts, excellent in their own right but less played or remembered.  The plus to that:  you can listen to Perdomo’s interpretation with clean ears, with less opportunity to compare them to the original (I haven’t listened to some of them in 40 years, which allowed me to have an unbiased listen to the “TRGTR” versions).  But you will notice a few things.  Fernando Perdomo is a remarkable musician, one who relies on emotion as much as technical wizardry.  He’s not going to play three notes where one will do.

At the same time, while one can hear flashes of Rundgren’s style in Perdomo’s performance, this is anything but a “look at me, I can sound just like my hero” album.  And that goes to the production as well, which Fernando helms at his own studio.  Again, you can hear some of the sonic qualities that are a Rundgren signature (a bit of psychedelia here, a lot of layering everywhere).  “TRGTR” is about honoring a great composer and musician, not slavishly imitating him.

Cases in point: album opener “Open My Eyes” has a bit harder edge than the 1968 Nazz original, and it’s somewhat more rollicking as well (an interesting combination).  Yet it’s still a psychedelic power-pop classic.  “Can We Still Be Friend”s is, again, a plaintive cry from a guy who will do anything to be near the one he loves.  But the guitar, subbing for the Rundgren vocals, adds an intensity and maturity.  “Bang the Drum All Day” is probably The Runt’s best-known tune, sung at sporting events, frat parties and more.  Perdomo recasts the piece as “Bang on the Drum” and shifts from the original ska beat to an uptempo blues shuffle—it becomes a nearly new song in a very intriguing way.

“Hello It’s Me” is another Rundgren song of longing and loss—and in the original form, it’s a bit light and airy, wistful perhaps.  Perdomo dispenses with that immediately: “Hello it’s me, you bastard!” is growled out before the music starts.  And the guitar gives things an edge.  That lost lover is about to get the surprise of his or her life, and it ain’t going to be pleasant. 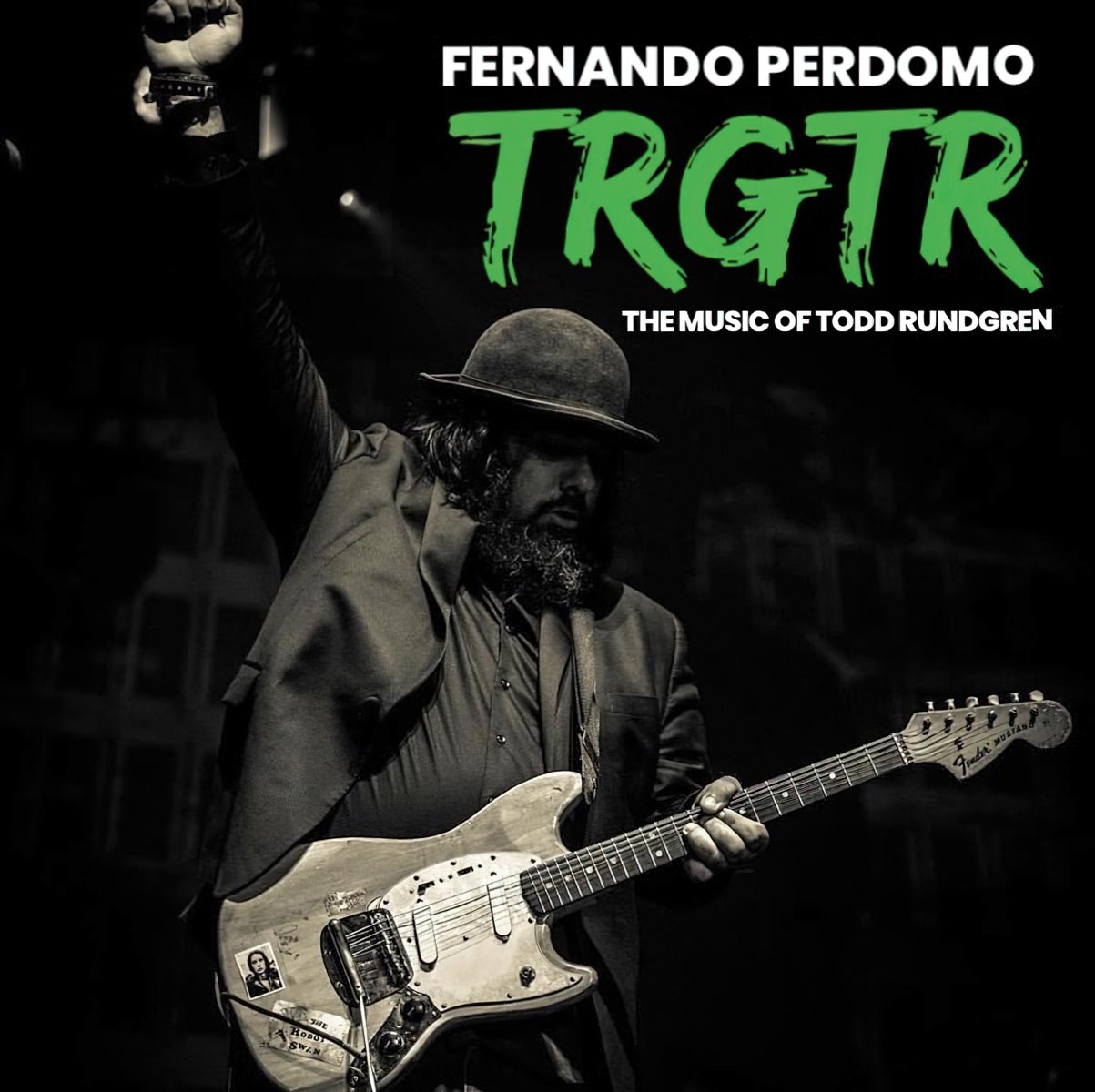 And then there’s “Couldn’t I Just Tell You” —and you guessed it, another longing song (someday I’ll tell you about how the original was in my heart back in ’72 when the girl of my dreams just wanted to be friends… of course, we ended up getting married 33 years later, so the song has a different meaning now than then.  But I digress…).  This is one of the greatest power-pop songs ever done.  Period.  And Perdomo’s version does it more than great justice.  It’s a bit harder on the bottom end, and yet it never bogs down.  I love this one (maybe the once friend-turned-wife will, too).

Those are the better-known songs on “TRGTR.”  The others are also very, very strong and catchy.

But one thing bothers me (well, I suppose there are a lot of things that bother me, but only one regarding this album).  Words.  I know, I know.  It’s an instrumental album, it’s not supposed to contain lyrics.  And it makes sense.  But…one of Rundgren’s great strengths is as a wordsmith.  He can be clever, incisive, biting, lascivious, obtuse—sometimes all of those things in a three- minute song.  They’re integral to what he’s trying to say in the music.  One of his earliest hits drove that home to a 15-year-old kid in Indiana: “We gotta get you a woman.  And when we’re through with you…we’ll get me one, too.”  While listening to “TRGTR,” I find myself singing words that aren’t on the CD.  Which is okay (unless you’ve heard me sing).  But that’s a “me” thing and not a reflection on Fernando Perdomo or this album.

And, in fact, “TRGTR” will leave you speechless, trying to take in everything Perdomo does.  He’s a master artisan, crafting beautiful sounds from his instruments in tribute to one of the greats. I’m curious as to what will be on Volume 2 (oh, I forgot to say that Fernando plans at least one sequel).  And I can’t wait to hear how he interprets other classics of The Runt, The Wizard (A True Star).  Todd Rundgren lives!  And the music is timeless.

“TRGTR” is a strong tribute to one of the more remarkable composers and musicians that rock has produced over the last half-century. Fernando Perdomo has done a great job of doing justice to Todd Rundgren’s music without merely recreating the originals, note for note. It’s a new take on some classic works, and I suspect the Runt himself would admire this record.