First things first: you need to check out Evership. For those of you who love the classic sounds of the prog greats from the ’70’s, this is a new band for you. Reading this review is a fine first step, but their ship won’t really come in until a new fan base is assembled, cheering on the shores. So if you haven’t already, consider finding their first album online (or their second, if it’s available by the time you read this) on Bandcamp or a similar service and listen in as you read on.

What makes Evership so special? They have an uncanny ability to take the past and make it relevant and fresh in the present. The beloved sounds of classic rock bands such as Kansas, Styx and Queen are embraced, but the band also reveal their admirable skills in storytelling and melodic songwriting, thanks to mastermind Shane Atkinson who writes, plays keys and drums. And then there’s the voice of Beau West. Lead vocals like this don’t come along often enough these days like they did in the ’70’s, and the pairing of West’s high tenor with Atkinson’s keyboard-driven symphonic compositions make for some of the most beautiful melodic moments in recent memory. Really, the essence and secret sauce of the band is wrapped up in these two gentlemen, providing material that sounds familiar and yet delights with its discovery. It’s as if Elton John had taken a sharp left-turn after recording “Funeral For A Friend” and jumped into prog rock with abandon.

Although this review is meant to cover Evership II, mention must be made of their debut album that was released two years prior, for it would be a shame to miss the epic masterpieces contained therein. Indeed, it may be best to start there at the beginning, basking in the glory of those five lengthy compositions which will reveal more magic with each listen. Likewise, this follow-up album is a grower, containing themes that will jump out at you during the first listen, but whose impact will grow with repeated visits.

The majority of Evership’s material fits roughly into the timespan of 8-12 minutes, which seems an appropriate length to develop their stories and musical themes. For the most part, this formula plays out well on the second album too, starting with opener “The Serious Room”. Although this song contains one of the more consistently straight-forward grooves on the album, there is plenty of musical development throughout the piece to make it much more than standard rock fare. The vocal melody snakes around the rhythm section, accentuated by synthetic horns and washes of ambient keys, which sets the vibe of a smokey corner bar. Both acoustic and electric guitar solos make impactful appearances. The skilled delivery assures that this song a winner, but the flavor of the song is quite atypical of most Evership fare, making it a curious choice as an opener.

“Monomyth” then travels to Evership’s more familiar terrain: a keyboard-driven mini-epic powered by aggressive drumming from Atkinson and vocal prowess from West. By the time we reach the solace of the lovely melodies that guide the lyric “Hope will arise”, cradled in acoustic strumming and slide guitar, we realize some of the aspects that make this band so special. “Real or Imagined” then starts with a more acoustic approach, nicely alternating with satisfying rocking sections that let lead guitar come to the fore. That Evership consistently delivers songs as satisfying as this one proves that their writing ambition is matched by their performing abilities. As usual, West’s anthemic singing is the thread that holds it all together. Simply glorious.

“Wanderer” is perhaps one of Evership’s sweetest melodic pinnacles. Indeed, this may be the most beautiful Elton John song that he never actually wrote. A ballad at its core, the band members can’t resist progging it out with an intro that has the chordal progression of a long epic, even though it ends up being one of their shortest songs. Add some Styx symph soloing, a classic ’70’s guitar solo, and gorgeous melodic lines and you’ve got all the pieces for a lovely interlude in between the album’s longer pieces, but which at the same time proves to be a highlight in and of itself. 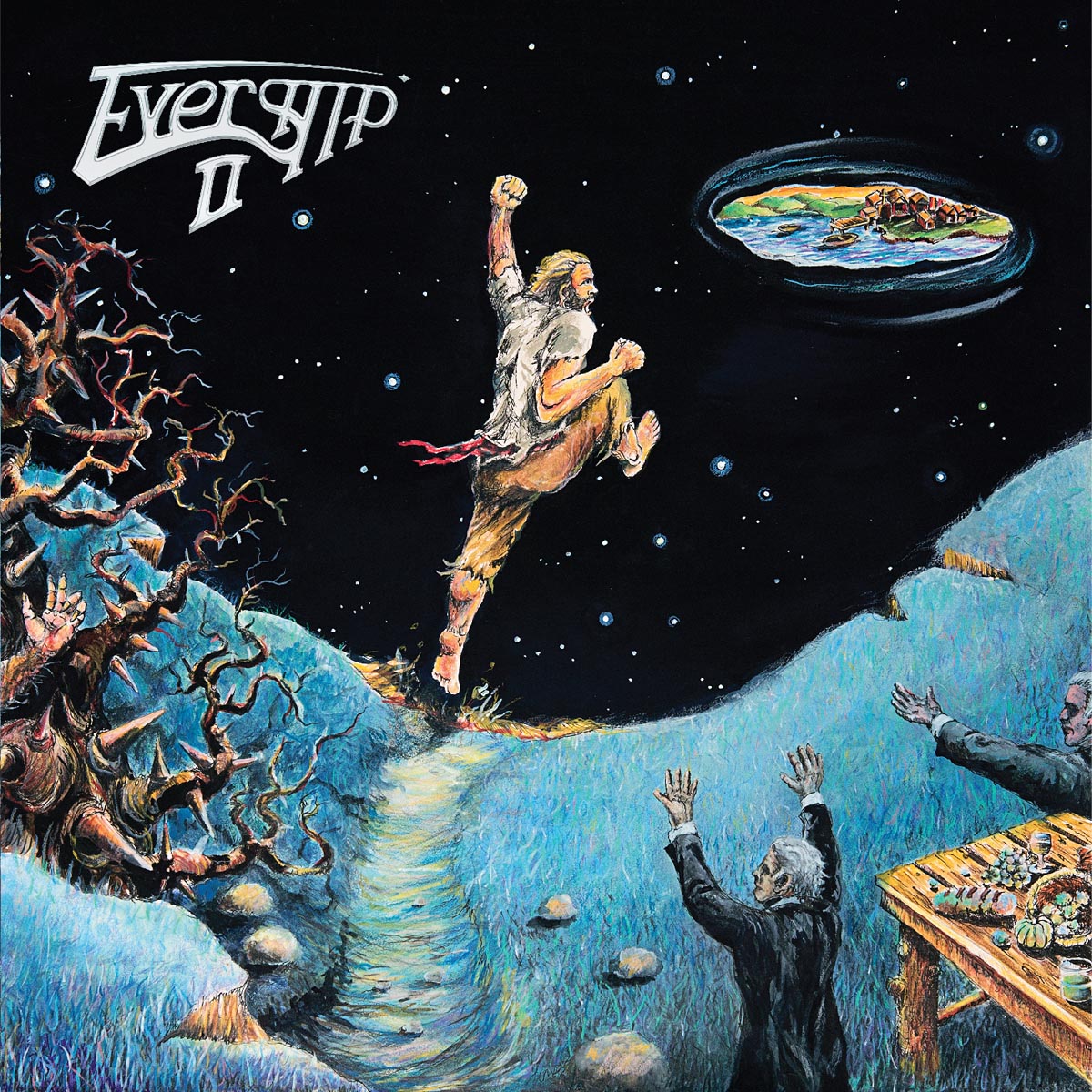 Halfway through the album, the ship’s course now turns toward the direction that so many classic prog bands have charted previously: the Epic. The tale of “Isle of the Broken Tree” is told over the course of six sections – at nearly half an hour long – as the album’s final offering. Starting off with a yearning acoustic guitar theme, celestial keyboards quickly carry us on an epic ride into the overture before beginning the journey in earnest as West comes in, singing over a bed of acoustic guitar and flute. The pastorale bliss continues and it’s over seven minutes until the full band launches in with passion. The middle sections are harder-hitting, with an attack (literally!) which is a welcome change of pace before returning to beautiful lead lines sung by West. Atkinson knows how to evoke emotions from his musical passages and melodies, and we are treated to many of them throughout, reaching a climactic ending at the song’s finale. Evership have previously laid strong foundations in their well-crafted mini-epics, so it is no surprise that they are successful in this latest endeavor, proving that they remain as engaging as ever even when taking a complete album side to do it.

Instrumentally the band is solid, focusing more on rich layering than on flashy soloing. Atkinson does double duty with his vast array of keyboards and piano, and then also delivering most of the drums and percussion, not to mention some vocal sections! It’s truly staggering the amount of work he has poured into this labor of love. Along the way, we have many fine moments of rhythm and slide guitar coloring the journey, a good amount of it being acoustic, thanks to John Rose and James Atkinson. Still, the guitar solos seem few and far between, which is perhaps one rare area where Evership could develop more in the future. The low end is just right, offered by Ben Young who also plays Chapman Stick.

As evidenced, Evership have so much going for them…what is to stop them from standing shoulder to shoulder amongst contemporary prog rock’s finest elite bands? One factor that could raise the bar even higher is to enlist a top producer and engineer. Atkinson does virtually everything himself, in addition to the songwriting and performance. While that likely works well from a financial and control standpoint, the material and talent in this band would shine even brighter from a stellar mix. The material is all here, but at times it is buried with some confusing mixing decisions and an especially muddy drum sound. Guitar solos disappear into washes of keyboards prematurely, and some of the vocal delivery would stand out even more brilliantly with different production choices. In the hands of a dedicated producer, Evership could deliver a masterpiece that would handily sit atop the best that any year’s releases could offer.

Back to the beginning: if you haven’t already, you need to check out Evership (their own store is at this location). Hopefully these first two albums will earn them deserved attention and their trajectory will continue to elevate with future releases. They truly belong alongside the stars of this genre.