Physical Graffiti. Snow. The Astonishing. Quadrophenia. The White Album. The Wall. The Book of Souls. Pretty much every Ayreon release ever. What all of these epic masterpieces share in common is that they are double-albums. We are grateful; the musical landscape is made much more colorful and interesting for having them in our lives. Although it may not be a fair comparison, the Teutonic Queen of Metal herself has entered the fray with an ambitious 2018 double release. That’s right, Germany’s own Doro Pesch has 19 all-new songs collected in a set entitled Forever Warriors (Disc 1) and Forever United (Disc 2). While you may not expect it to stand shoulder-to-shoulder with any of the aforementioned classics (with good reason), you may still be wondering: Does it rock?

Well, the answer is yes. And no. But mostly no. While it is not the worst background soundtrack for working out, painting a house, driving a car while chatting with friends, the best and brightest who frequent Sonic Perspectives will most likely be disappointed if they pay the new Doro release any serious scrutiny.

An unfortunate reality of the rock and metal scene is that many of our heroes are no longer spring chickens. We recently placed new work by Don Dokken and Graham Bonnet under the microscope and were objective to both. The former proved below expectations, while the latter surprised and surpassed. From a standpoint of vocal ability, Doro holds her own respectably in spite of the years and thousands of live performances. The only problem may be that her delivery is just not all that interesting, unfortunately. Offhand, Anneke van Giersbergen is making her way toward 50, and yet may be the single best female voice on the scene, both from a perspective of vocal character, as well as technique. Fortyish Floor Jansen continues to conquer the Euro-metal scene, and although a different animal from Anneke, she is light-years ahead Doro in terms of versatility and delivery. The next generation of metal is in good hands with younger talent like Nina Osegueda of Sound of Thunder, as well as Sarah Teets of Mindmaze fame. The bottom line is this: with such mind-blowing talent on the metal playing field, there is diminishing reason to listen to Doro, unless one is a hardcore fan and collector.

Lest one think this is some sort of roundup of “female-fronted” metal, please do not misunderstand. In many ways, the male voice and the female voice are simply different musical instruments, like an alto sax and a baritone. While it is probably counterproductive to women in metal to pigeonhole them into a faux-genre like “female-fronted,” for the purposes of evaluating a singer like Doro, it is a more reasonable apples-to-apples comparison to consider how she stacks up against other female voices. To that end, Frau Pesch still has her place. However, as women continue to find their place in rock and metal, her novelty value continues to fade as new talent rises to the surface. 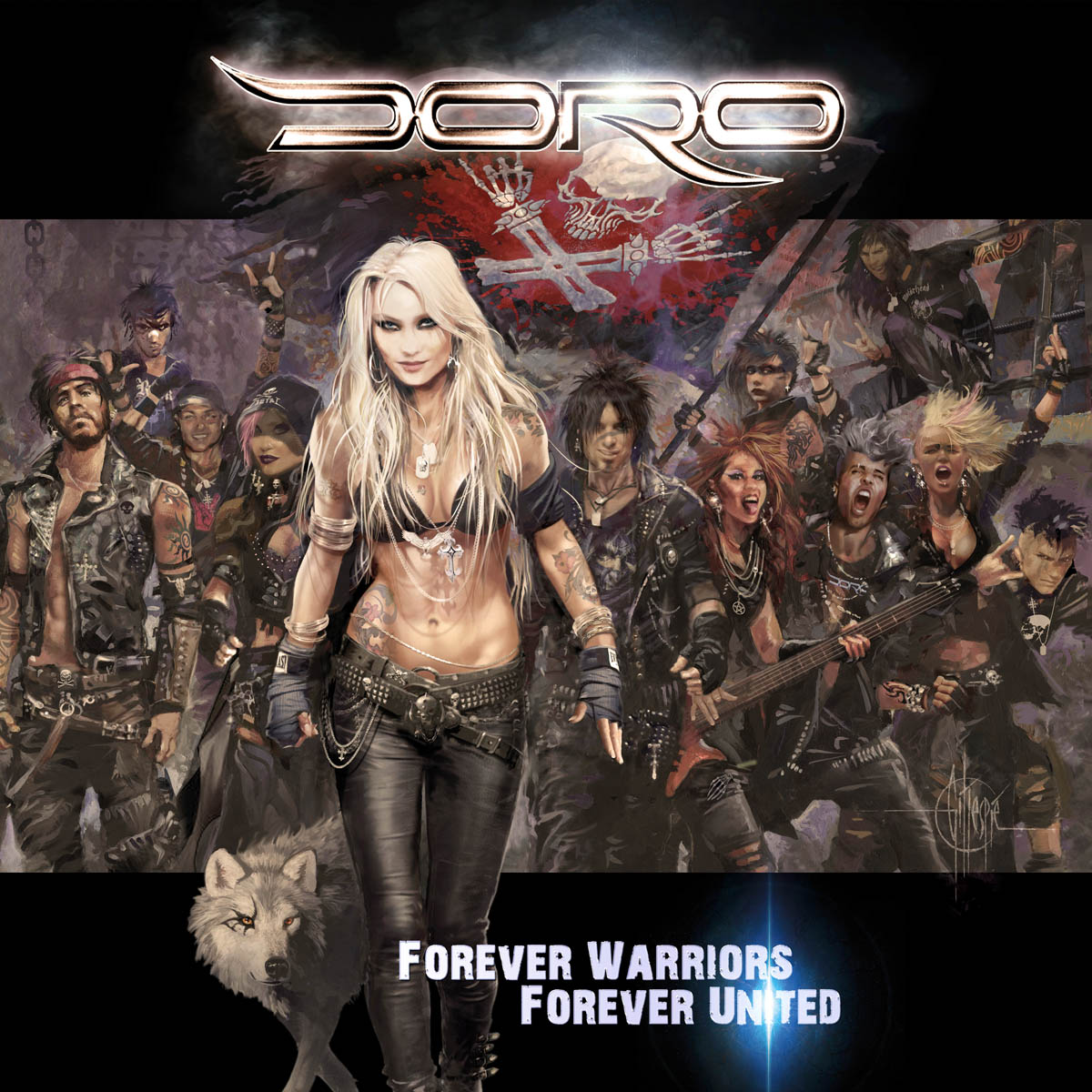 Aside from Doro’s vocal delivery, how is the album? In a word, mundane. The songs have been marinated in a mixture of uninspired un-originality. The lyrics are simple and lack in anything resembling deep meaning. Often the lyrical writing makes old-school Motley Crüe seem like Marillion by comparison. Frankly, the songs seem like someone recovered the notebook of a seventeen-year-old garage band front-man, circa 1991. The album starts with what attempts to be single/radio material, or at least some sort of Wacken Open Air crowd-pleasing headbanger. However, it really just ends up being a wordless chant followed by the phrase “All For Metal.” A lot. With the occasional gang vocal yelling of the word “Metal.” Message received.

The second song is called “Bastardos,” and consists largely of that word and few others. Take note, this is a recurring theme on these two discs. The third track shows a modicum of promise until the world’s worst cookie monster vocals arrive. Normally this would be hard to forget about, except that the guitars sound like someone has plugged a $200 BC Rich Warlock into a Boss Metal Zone pedal and a 15-watt Crate solid state combo amp, and turned up every possible knob to 10. So, at least there is that to give the blue Muppet an occasional break for milk and cookies. The album moves on to a song called “Soldier of Metal.” Guess what three words the song consists of? One can almost see how a song like Metal Militia was cool from a gaggle of teenage Bay-Area Bangers back in 1982, but the hubris of a 50-something woman singing with seriousness about being a soldier of metal is a little much. The rest of the first disc has its ups and downs, none of it necessarily bad, but largely forgettable. In Doro tradition, the first disc features a German language stadium rocker entitled “Freunds fürs Leben” (Friends for Life). It is a cute love-letter to the fans, and Doro should be commended for the gesture.

Unfortunately, the second disc reaches back into its lightweight bag of tricks to kick off with “Resistance,” which is pronounced in French revolutionary style, which is fun. However, the one word pretty much becomes the entire song. The disc trudges through a couple unremarkable songs before arriving at “Cuts So Deep,” which was pleasantly surprising as a tender heartbreak ballad, with respectable melody and vocal delivery. It would have been right at home on one of the Monster Ballads collections we used to see advertised on late-night cable, and there is nothing wrong with that. Maybe someplace between Damn Yankees “High Enough” and Winger “Headed for a Heartbreak.”

The next song “Love is a Sin” introduces a Tim Curry Legend-esque Lucifer voice which is an interesting gimmick until he starts to overstay his welcome. Although there are occasional cool grooves and riffs, the rest of the album is really just filler. It would have been appropriate to hold back and deliver something really memorable as a last track. We are not expecting “The Count of Tuscany”, but a six-minute song with a story or some interesting instrumentation, or a big buildup to a headbanging crescendo could have finished this whole thing off in style. As it stands, the album just sort of runs out of gas on the side of the highway, to eventually get an orange tag from the State Police.

While the album is not terrible, it is unimaginative and unremarkable. We love big ambitious concept albums and double-records, but we value quality over quantity. It may have been a better use of writing and production time to produce a single-disc album with a higher concentration of the good moments. Most listeners would probably much prefer ten tracks deserving of a 7 out of 10 rating, than what this ends up being: 20 tracks with quality ranging from 4 to 7. Between the stale and simple song structure, and the dull lyrics, there is very little here to justify writing home. If the vocals were less Doro and more Soto, there could be something of value, but as it is, there is not much to see (or hear here).

We wanted to like this album. Seeing a golden rocker like Graham Bonnet defy age and the odds to deliver a blistering metal album was heartwarming, and we wanted nothing more than to see Doro also deliver the goods. However, there is unfortunately little to recommend the album, unless one is a longtime Doro fan. It just seems to be a missed opportunity. The artistic drawing of 22-year-old Doro on the cover unfortunately does not live up to the dated and faded product found within