After triumphantly making themselves heard at Ramblin’ Man Fair, Cellar Door Moon Crow looked completely at home surrounded by the likes of The Darkness, Cheap Trick and The Temperance Movement and now they’re ready to unleash the next steps of their incredible journey. Few can lay claim to mastering such an impressive sound in just a few years, whilst also launching themselves into the scene in a seriously audacious fashion. The Sheffield two-piece put a completely new meaning to the phrase “destroying genre boundaries” as they announce the release date of their debut album ‘You Got This,’ as well as a mammoth 14-date tour with no-nonsense Australian rockers Airbourne.

Phil and Tommy Goodwin have been winning over the ears and hearts of some of the biggest names in the business with their incredibly diverse and versatile sound, not to mention their electric stage presence that results in one of the biggest live ruckuses around. Described by BBC Introducing as a blend between “The White Stripes, The Black Keys and Beastie Boys”, they have everything from beefy, bounce-worthy guitar work, foundation laying drum grooves, infectious rapping, delicate vocal melodies, tranquil piano playing and everything in between. Their expressive and eccentric storytelling takes them into the world of bluesy ZZ Top rock and roll and old-school 80s hip-hop jams in a heartbeat. The first single ‘Tightrope’ kicks off today (and you can enjoy it below), whilst the full 15 track album is scheduled to land on the 1st November.

As well as their unbelievably addictive and inimitable rock and roll, Cellar Door Moon Crow also have a few other strings to their bow. Their effortless swag, attitude and eye-catching live shows have won over fans up and down the country, and now they’re ready to hit the road again with Airbourne in November. The band added:

“Born and raised on AC/DC with a bedroom full of Natalie Imbruglia posters we love Australia. Our uncle Don lives in Perth and he says it’s great. With that in mind we were in London back in 2008 reminiscing of an NME tour where Nic JET had made a mess of some penne pasta across from the Leadmill. It had been a messy session in the Barfly, so we decided to chip over to Oxford street to the 100Club. Refused entry because of Tommy’s porkpie hat we went across to the Astoria. A friend of ours knew Dan Hawkins and he was down that night for a guest appearance with the mighty Airbourne. It was the last time we would ever go to the Astoria. We were half cut and they lifted the roof off. Halfway through “Whole lotta Rosie” I was crowd surfing and I launched my beer at Joel. He caught it, downed it and launched it back. I knew at that exact moment one day we would share a stage. We are beyond excited to complete this Autumn line up, Tyler Bryant is the man. Riff Rap with Riff Raff.”

See Airbourne, Tyler Bryant & The Shake Down and Cellar Door Moon Crow on the following dates: 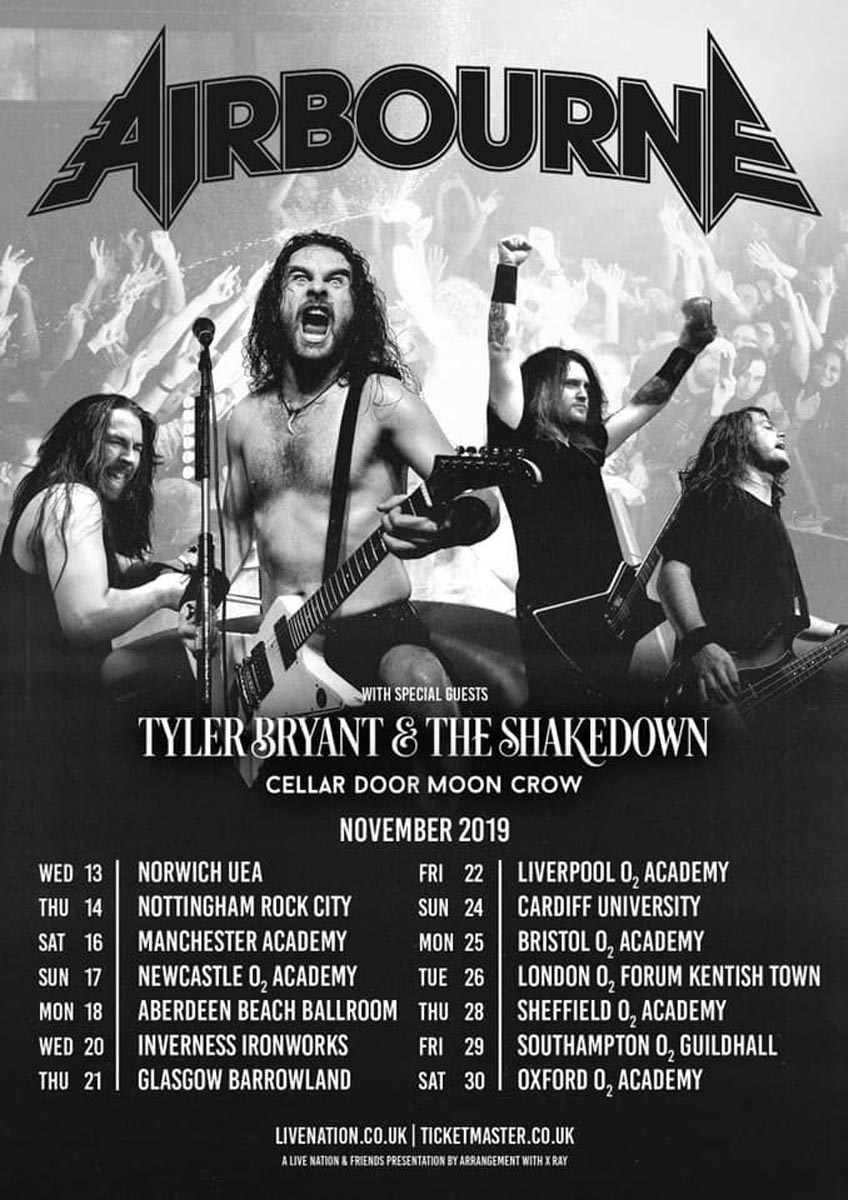 Without a doubt one of the most exciting and impressive up and coming bands around. Cellar Door Moon Crow are a dynamic duo you do not want to miss. Are you ready?