As the gum slogan and Steel Panther life motto states, it is always better to “double your pleasure.” Now, Steel Panther announce 2 tickets to their upcoming virtual concerts for $20.00 (deal valid until December 5th) – Doublemint twins not included. The band will be performing live from the Viper Room on December 5th for Gobblefest – Gobbling Isn’t Just For The Holidays Livestream and the Almost Live – Formal As Fuck New Year’s Eve Special. Both shows will start at 2:00PM PST and the 2 for $20 tickets as well as exclusive merch can be purchased here.

Gobblefest – Gobbling Isn’t Just For The Holidays comes on the heels of the band’s successful Halloween show. That show saw guests such as Rob “Blasko” Nicholson from Ozzy Osbourne’s band play the classic “Over The Mountain” with a more forgetful-than-usual Ozzy Starr. Jesse Hughes from Eagles of Death Metal threw down on Judas Priest’s “You Got Another Thing Coming” and Billy Idol’s “White Wedding.” After that show, Steel Panther thought they would make Gobblefest a festival livestream, but after co-headliners Corn, Mashed Potatoes and Sloppy Seconds along with all of the support bands canceled, the band changed plans. In the meantime, Bobby Blotzer of RATT has stepped in to help on December 5th with other surprise guests to be announced in the near future. The band will debut their new anthem about this year, “Fuck 2020” – a reimagining of their crowd favorite hit “Fuck Everybody” from their latest album “Heavy Metal Rules.”

On December 31st, The Almost Live – Formal As Fuck New Year’s Eve Special will be the perfect way to ring in your New Year. We are saying up front that this is “Almost Live.” With a global celebration unlikely in these current times, Steel Panther have decided to replace the stuffy “Auld Lang Syne” with their new anthem “Fuck 2020.” Also, the band has tapped Slipknot frontman Corey Taylor and Fozzy frontman Chris Jericho to join in the celebration.

* Tickets for each show individually are $15 US dollars each. All fans will be able to purchase the 2 for $20 tickets up until December 5th. 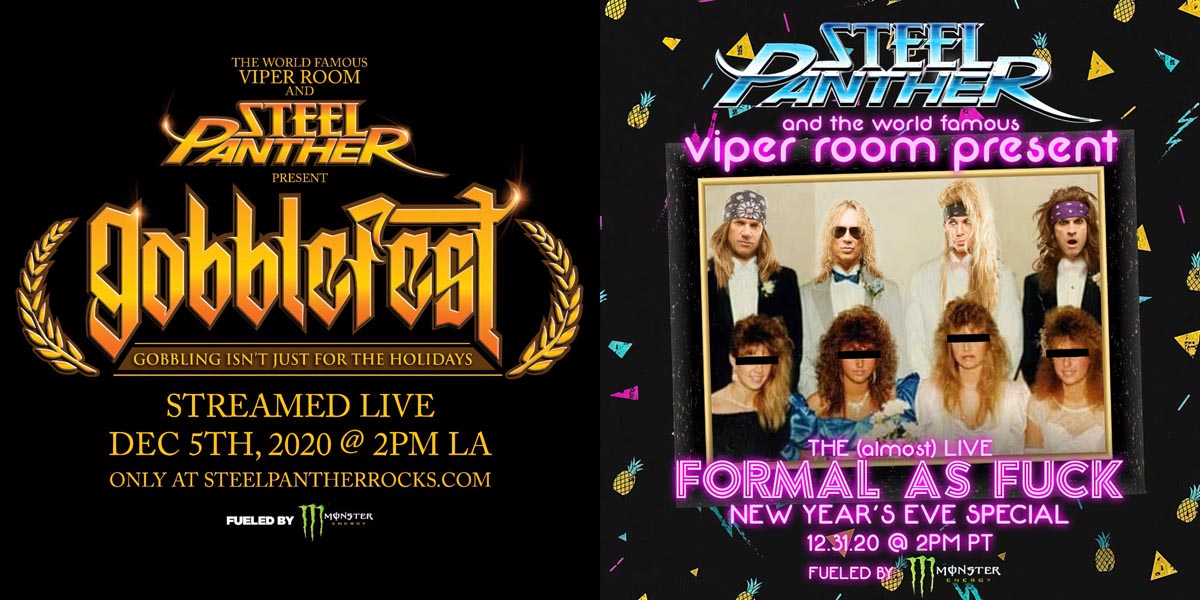