Season of Mist has released a special 4 CD Box Set for Greek symphonic metal icons, SEPTICFLESH. In the Flesh – Part I features the band’s first four albums, Mystic Places, Esoptron, Ophidian Wheel, and Fallen Temple bundled together in a 4CD Jewel Case along with a 16 page lyric booklet. The set has been released this past Friday and is available at the Season of Mist E-Shop and Bandcamp. 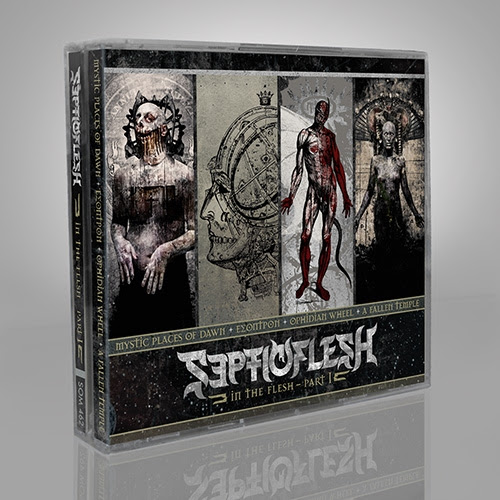 SEPTICFLESH have established themselves as a leading force of symphonic Dark Metal with critically acclaimed masterpieces Communion (’08) and The Great Mass (’11). However, their long out-of-print debut full-length, Mystic Places of Dawn, was somewhat of a cult phenomenon upon it original release in 1994. Mystic… presented strong death metal overtones alongside elements that become SEPTICFLESH’s trademarks; their unique vocals, haunting guitar passages, and samples hinting at their classical influences. Mystic Places of Dawn presents the foundation of this band’s crucial and intelligent metal.

Esoptron is the second studio album from Greek kings of black metal SEPTICFLESH. Infectious but yet pummeling hooks give way to melodic interludes and then suddenly break into heavy passages with tortured, shrieked vocals; Esoptron showcases a young SEPTICFLESH further honing their craft and cementing themselves among the heavy metal elite.

Ophidian Wheel, the third proper full-length from the Greek dark metal masters SEPTICFLESH, marks a critical turning point in the band’s career. On this album, SEPTICFLESH further expanded their musical vocabulary, and added female soprano vocalist Natalie Rassoulis. Ophidian Wheel sees the band moving even further into the symphonic-laden and classically-tinged metal arrangements that have become their calling card.

A Fallen Temple, the fourth full-length in the long-running career of Greek metal luminaries SEPTICFLESH, occupied a unique space in the band’s history upon its original release in ’98. The album featured re-recordings from their savage debut LP, Temple of the Lost Race, interspersed amongst some of the band’s most avant-garde work to date. The heightened atmospherics, synthesized orchestration, and angelic soprano vocals affirmed the bold and adventurous creative direction the band had begun to follow, and was the perfect bridge to what was coming with 1999’s Revolution DNA.