Florida death metal veterans OBITUARY have announced a new two-part spring livestream series. The band will perform its favorite songs on March 27 and run through its classic third album, 1992’s “The End Complete”, in its entirety on April 3.

Tickets, t-shirts and bundles are available beginning this Friday, March 5 at 1 p.m. EST at www.obituarylive.com

OBITUARY comments: “For the past seven weeks, we have locked ourselves inside the studio to prepare for these next studio livestream sessions. Re-learning the now 29-year-old ‘The End Complete’ album and rehearsing many of the bands favorites. We are proud to announce that we are ready to bring our fans the goods and have picked a killer selection of classic songs, rare tracks and ‘The End Complete’ album performed in its entirety. We have been busting our asses preparing and now WE are ready. Question is…Are YOU? Here we Go!!!!!”

Last October, OBITUARY took part in a three-part “live stream concert series” featuring full-album performances of “Slowly We Rot”, “Cause Of Death” and rare classics. The first two streams — a “Slowly We Rot” set; and a “Cause Of Death” set — were live from the ESI Streaming Studio in Tampa, Florida. The third stream, featuring rare classics and special tracks, was broadcasted live from OBITUARY‘s recording studio in Gibsonton, Florida. 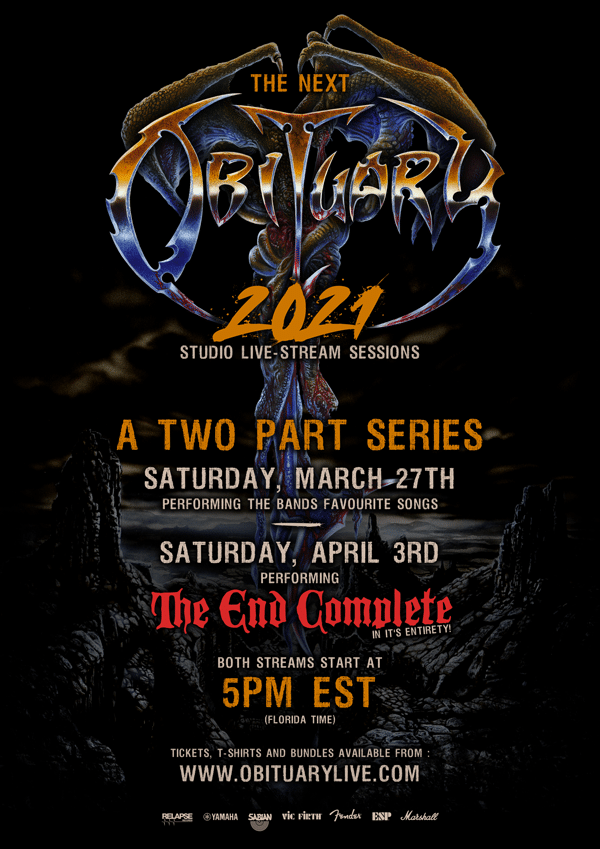