“I’ve been diagnosed with throat cancer. It’s clearly something to be respected and faced head on — but I’ve faced obstacles before. I’m working closely with my doctors, and we’ve mapped out a treatment plan which they feel has a 90% success rate. Treatment has already begun. Unfortunately, this requires that we cancel most shows this year. The 2019 Megacruise will happen, and the band will be a part of it in some form. All up to date information will be at megadeth.com as we get it. MEGADETH will be back on the road ASAP”

“Meanwhile, Kiko, David, Dirk and I are in the studio, working on the follow up to ‘Dystopia’ — which I can’t wait for everyone to hear. I’m so thankful for my whole team — family, doctors, band members, trainers, and more. I’ll keep everyone posted” 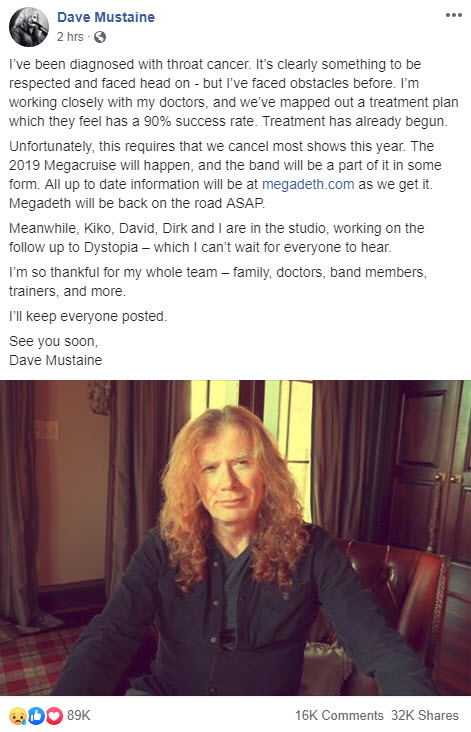 Mustaine, who many consider an architect of the speed metal movement, has earned a very loyal following in the past three and a half decades, with MEGADETH achieving worldwide success, selling more than 38 million albums worldwide, with six consecutive platinum efforts, seven Top 10 albums, and numerous accolades, including 12 Grammy nominations and a 2017 Grammy Award in the “Best Metal Performance” category for the “Dystopia” title track.

After the news spread, a true outpouring of support had flooded social media, with members of SLAYER, MEGADETH, ANTHRAX, OVERKILL, STRYPER, LACUNA COIL and FOZZY  among the musicians who have wished Dave Mustaine a speedy recovery.

The Dean Guitars staff joined the sentiment, with CEO Evan Rubinson saying: “We rally behind Dave and his family at this time of need and offer any and all support. One of our Dean family is dealing with something that is close to home for me, and we wish, with all our hearts, healing for our brother.”

Needless to say we join them all in sending healing vibes to Dave, who we are sure will defeat the disease in due time.