It’s been three years since MAGNUM brought out “The Valley Of Tears – The Ballads”, a compilation that focused on the British rock act’s quiet, more otherworldly and dreamy side. Three years during which the idea matured to follow this successful release (top 100 of the German album charts) with a companion piece. “Dance Of The Black Tattoo” has turned into exactly that: a collection of songs that present MAGNUM exclusively as tough-as-nails rocking and extremely vibrant musicians. What makes this album so special is the fact that MAGNUM have gone through their impressive archive, looking for rare live cuts and outstanding radio versions and have come up with spirited live recordings and edits that concentrate on the essential components of some of their most accomplished rock numbers. Naturally, guitarist and band mastermind Tony Clarkin has used this opportunity to remaster and update all 14 tracks so that they comply with the state-of-the-art of (sound) technology.

Says Clarkin: “There have always been two aspects to MAGNUM: a slightly more tender and lyrical facet, but first and foremost of course our powerful, rocking side. And that’s the element that ‘Dance Of The Black Tattoo’ documents impressively.”

The album kicks off with live versions of “Black Skies” and “Freedom Day”, previously available exclusively as DVD bonus tracks on “Escape From The Shadow Garden”. According to Clarkin, they were “the perfect launch of this compilation because they present MAGNUM musically and lyrically from our familiar raw side. The subsequent ‘All My Bridges’ is a little different in that the music is still heavy, but the lyrics are more poetic,” explains Clarkin, whose dynamic guitar style has harmonized perfectly with MAGNUM vocalist Bob Catley‘s warm and charismatic voice for almost fifty (!) years.

“On A Storyteller’s Night”, the title track of their 1985 masterpiece, and “Dance Of The Black Tattoo” are another two rare live tracks from the bonus section of “Escape From The Shadow Garden”, followed by radio edits of their seasonal anti-war number “On Christmas Day” and the fan favorite “Born To Be King” off their classic “Goodnight L.A.”, previously only available on vinyl or for digital download, followed by “Phantom Of Paradise Circus” and “No God Or Saviour”, both bonus tracks from “Sacred Blood – Divine Lies”.

Clarkin says: “To be honest, when I started going through those old masters, I didn’t even have ‘Phantom Of Paradise Circus’ on my radar. I usually start working on new material about four weeks after the release of an album, so occasionally a song may sink into oblivion although it has a lot of substance and class. Such as ‘Phantom Of Paradise Circus’. I really love that number and am happy that it is getting the attention it deserves at last.”

“Your Dreams Won’t Die” and “Twelve Men Wise And Just” are two live bonus tracks which first featured on “Lost On The Road To Eternity”, before “Show Me Your Hands”, “Not Forgiven” and “Madman Or Messiah” — three previously unreleased radio edits from the still topical studio recordings “Lost On The Road To Eternity” (2018) and “The Serpent Rings” (2020) — round off the new release. “Sometimes it’s not easy to shorten a carefully balanced composition for the radio, but in these three cases it worked really well,” reckons Clarkin.

Talking of working well: Naturally the artwork of “Dance Of The Black Tattoo” was designed by MAGNUM‘s tried-and-tested cover artist Rodney Matthews, who always succeeds in translating the special ambience of the British rock group’s albums into atmospheric images and colours.

Clarkin comments: “This time it was easy really: I called Rodney, told him the album title and he sent me this absolutely fascinating artwork. I bet our fans will love his little masterpiece.”

“Dance Of The Black Tattoo” will be released January 8, 2021 through Steamhammer/SPV as CD digipak, 2LP gatefold version, special CD/LP bundle with shirt (only at the Steamhammer shop), download and stream. Pre-order it here. 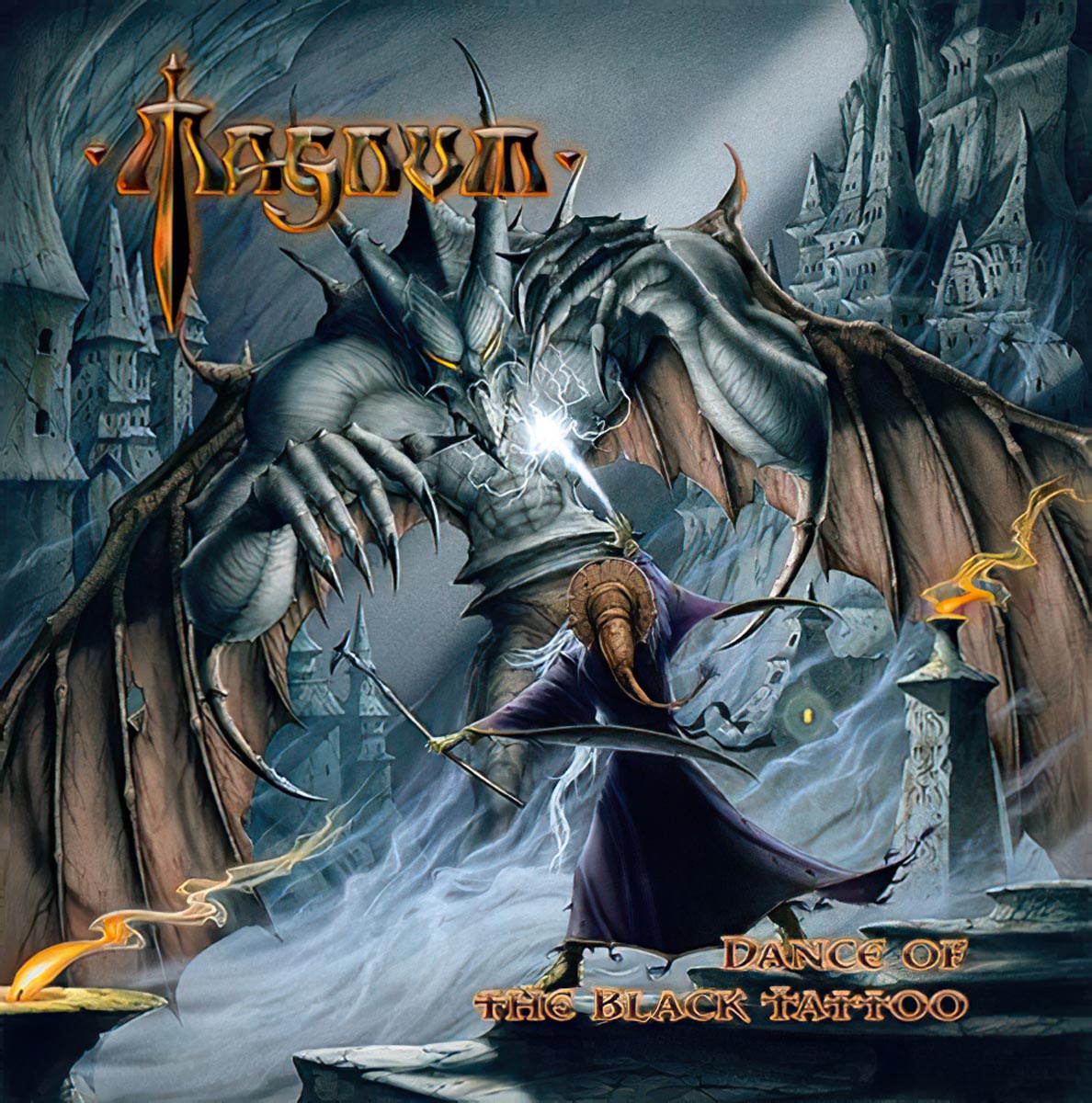