DREAM THEATER keyboardist Jordan Rudess will perform a two-piano classical concert event with his longtime Juilliard school friend, pianist Judith Lynn Stillman, on Saturday, December 15 at Sapinsley Hall in Providence, Rhode Island. They will be playing the greats: Mozart, Brahms and a special treat for DREAM THEATER fans. Tickets can be purchased at this location.

“It’s taken a lot of shredding, I mean practicing, leading up to this special evening, with so much new repertoire to learn, but I am beyond thrilled to be taking the stage with my dear friend, Judith Lynn Stillman,” Jordan said in a statement. “We met in the ’70s when we were piano students in Juilliard’s pre-college division. Through the years, although our careers have taken very different paths, we have stayed connected in our shared love of the piano. We have literally been devoted to mastering the piano for more than 50 years each. At the very least, come to this concert to witness what that level of commitment to the piano sounds like!!”

Rudess recently embarked on a three-continent solo piano tour, “From Bach To Rock”, featuring the music of DREAM THEATER reimagined for the piano. The trek began on November 12 with performances in Japan, Taibei and Singapore, followed by seven shows in Australia and New Zealand and five shows in Argentina, Chile and Brazil. 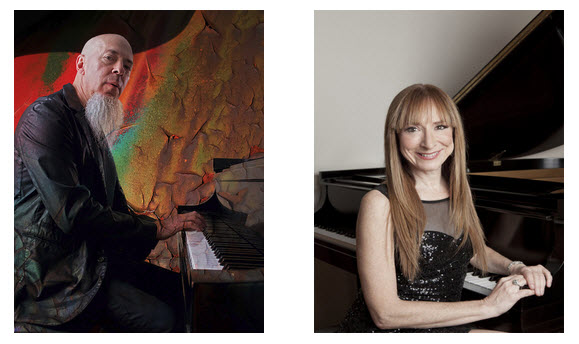 In a recent interview with The Rockpit, Jordan spoke about how he first discovered rock music. “Well, when I was really little and really focusing on classical, I also was aware of things like THE BEATLES and had a bunch of the old 45 records,” he said. “I didn’t have a chance to really dive into that and get seriously into it; I was just into the fringe of the whole thing. But as I got older into being a teenager, then I had friends who would turn me on to some stuff they thought I would love, which I did, like GENESIS, YES and GENTLE GIANT, EMERSON, LAKE & PALMER, and those things had a huge influence. The thing that really led me astray from the classical way was listening to EMERSON, LAKE & PALMER‘s ‘Tarkus’ album; that was a huge influence in my life. I loved that album — I thought it was amazing — and it kind of made me think there was something more beyond classical that I wanted to really know about.”

DREAM THEATER‘s 14th studio album, “Distance Over Time”, will be released on February 22, 2019. The disc marks the first for the band’s new label InsideOut Music. The artwork was created by longtime cover collaborator Hugh Syme (RUSH, IRON MAIDEN, STONE SOUR). “Distance Over Time” was produced by guitarist John Petrucci, mixed by Ben Grosse and mastered by Tom Baker. We recently published and interview with the band’s singer James LaBrie, which you can listen to HERE.