U.K.’s Download festival has announced IRON MAIDEN, KISS and SYSTEM OF A DOWN as its 2020 headliners, plus DEFTONES, KORN, THE OFFSPRING, DISTURBED and more of the world’s most exciting bands in rock, pop punk, hardcore and metal yet to be announced. The three-day festival takes place June 12-14, 2020 at the spiritual home of rock in Donington Park, Leicestershire. Tickets will be on sale at 2 p.m. on Wednesday, September 25 via downloadfestival.co.uk/tickets.

IRON MAIDEN will return to Donington next year to headline Download festival on Saturday night, in what will be one of only two homecoming U.K. festival shows in 2020. The London band have had countless No.1 records, including their most recent studio double album, 2015’s “The Book Of Souls”, in over 40 countries, as well as being hailed as one of the greatest live acts of all time. They’ve spent the summer on their historic and critically acclaimed “Legacy Of The Beast” North American tour, based on their award winning mobile game of the same name, which has been deemed by fans and national and rock media alike as “MAIDEN‘s most monumental show and best set-list ever,” so get ready, Downloaders, this is one performance you won’t want to miss.

MAIDEN vocalist Bruce Dickinson said: “Next year we will play a number of countries and cities we have yet to visit on this incredible tour, so it is terrific to be able to accept the invitation to return to Download in 2020 and we will certainly go to town and add a few extra items to the show. This will be our seventh time headlining at Donington Park. It’s home turf and we all really enjoy playing this festival, the vibe from the crowd is always fantastic.”

After an epic and well-documented 45-year career that launched an era of rock’n roll, the legendary KISS will perform in the U.K. at Download festival 2020, in a U.K. exclusive. They embarked on their final ever tour earlier this year under the appropriately named “End Of The Road”, and known for their trademark larger-than-life blistering performances, KISS have proven for decades why they are hands down the most iconic live show in rock’n roll, and one of the best headliners Donington has ever seen. With more than 100 million albums sold worldwide, it won’t just be KISS Army fans who will be blown away with their final Download performance next year.

“I’ve said it before, Download festival audiences are the best,” Gene Simmons said. “They are up for whatever is thrown at them. KISS is going to come fully prepared to rock their world in 2020 to say thank you for always showing up for us.” Added Paul Stanley: “Download will be the culmination of 47 years of unapologetic bombast and spectacle. We will make this a fitting farewell to a country and its people whose music remains the blood in our veins.”

Also headlining Download festival 2020 will be SYSTEM OF A DOWN in a U.K. exclusive. With just five studio albums, the Californian/Armenian band have earned themselves a worldwide following, never failing to put on a mind-blowing performance. SYSTEM OF A DOWN bassist Shavo Odadjian said: “From our appearances to many of my favorite bands’, Castle Donington has always had a special place in my heart. We’re proud and excited to continue its legacy.”

Since DEFTONES‘ inception, the multi-platinum, Grammy-winning alternative rock band from Sacramento have released seven albums and sold over 10 million albums worldwide which include fan-favorite tracks “My Own Summer (Shove It)”, “Change (House Of Flies)” and “Swerve City”. Drummer Abe Cunningham said: “Download has been a big part of our history. The fans and organizers have always shown us so much love and support, so when the opportunity to play arises, we answer the call!”

With the release of their 13th studio album, “The Nothing” last week, KORN will be joining the Download 2020 line up. The two-time Grammy Award-winning band have toured the world countless times and have continued to push the limits of the rock, alternative and metal genres, while remaining a pillar of influence for legions of fans and generations of artists around the globe. KORN guitarist James “Munky” Shaffer said: “I’m extremely anxious and enthusiastic at the same time, but I’m looking forward to getting back out there and returning to Download!”

Punk rioters THE OFFSPRING are heading to Download festival bringing with them punk rock anthems that include “Pretty Fly (For A White Guy)”, “You’re Gonna Go Far Kid”, “Self Esteem”, and dozens more.

Also joining the line up are GOJIRA, the French metallers who have become famous for their sonically dense sounds and bludgeoning heavy rhythms. The hard-hitting, multi-platinum-selling DISTURBED are returning to Donington with their aggressive blend of hard rock, alternative, and nu-metal. The band exploded onto the scene in 2000 with “Down With The Sickness”, and last year released their seventh album, “Evolution”, which reached the top 10 around the globe.

Hollywood hard rock act BLACK VEIL BRIDES will make their anticipated U.K. return. Renowned for their explosive live shows and tenacious fans, the five-piece have worked tirelessly to create a scene of their own. Last year saw the release of their fifth studio album, “Vale”, which landed at #1 on the U.S. Top Hard Rock Billboard chart.

With a new album looming this Friday, OF MICE & MEN have been dominating stages for over a decade and have had a disciple like following every step of the way that will undoubtedly follow them to Donington next year. Everyone’s favorite pirates, ALESTORM are jumping ship to the hallowed grounds of Download festival once again, bringing with them their pirate metal and perhaps their giant inflatable duck.

Download festival’s Andy Copping said: “Downloaders, your 2020 headliners are here! Rock ‘n’ roll legends KISS and SYSTEM OF A DOWN will both be headlining as U.K. festival exclusives and after four years away from Donington, IRON MAIDEN will return bringing with them mascot Eddie and more fire than we can handle, I’m counting down the days already!”

Download festival is the home of rock music and takes place on the sacred grounds of Donington Park, which have been associated with rock since the eighties. The festival attracts icons of rock and metal to its main stage, plus some of the best and hottest new acts in the world. 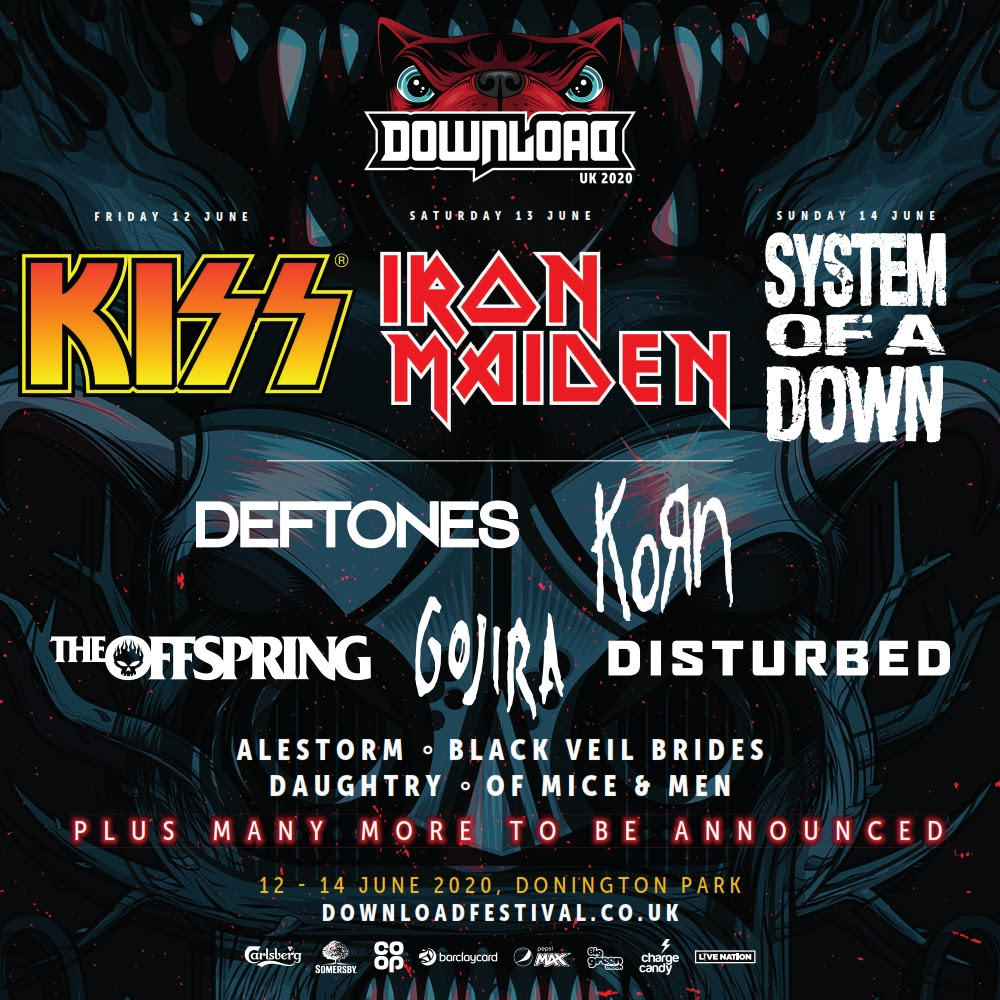