FIVE FINGER DEATH PUNCH have just announced they will embark on a U.S. headlining tour in the fall, bringing THREE DAYS GRACE, BAD WOLVES and FIRE FROM THE GODS as the supporting acts. Tickets will go on sale on Friday, July 26.

A portion from every ticket sold will benefit America’s defenders, veterans, first responders and their families via the Gary Sinise Foundation. 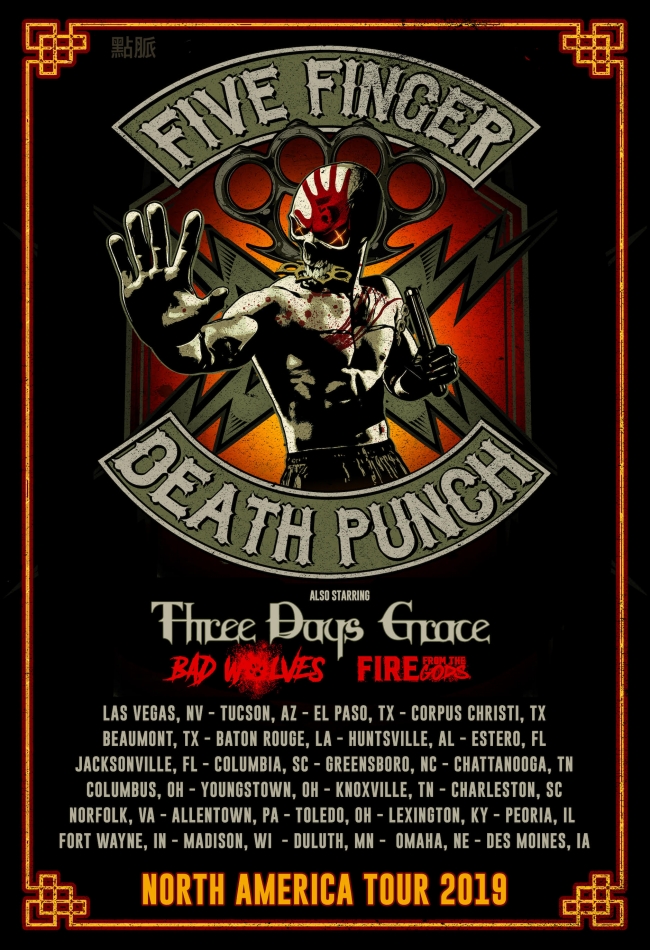 FIVE FINGER DEATH PUNCH guitarist Zoltan Bathory said in a recent video from the band’s latest recording sessions that its eighth studio album, due out in early 2020, will be a musical “roller coaster.” The new album is being recorded with its regular producer, Kevin Churko, the Canadian record producer/engineer and songwriter who works out of his private Las Vegas facility, The Hideout Recording Studio.

Bathory explained in the clip: “It feels like it is gonna be a heavier record. I’m kind of in the ‘War Is The Answer’ [2007] mood — the first, second record, that’s some of the kind of stuff that’s in my head right now. It’s always a balance. Jason [Hook, guitar] will bring the midtempo, the slower niceties. Naturally, our records always end up being a mixture. It has to be a roller coaster, it has to be a ride. It has to be a full landscape.”

The drums on the follow-up to 2018’s And Justice For None were laid down by Charlie “The Engine” Engen. He made his live debut with the group during its fall 2018 tour with BREAKING BENJAMIN. He stepped in for original FIVE FINGER drummer Jeremy Spencer, who left the band in December. It’s not clear at the moment whether Engen will be made a permanent member of the band or will continue as a hired hand.