The mighty Saxon will be releasing their latest album “Inspirations” via Silver Lining Music on March 19th, 2021. It’s a cover album of 11 songs by the bands and their songs that influenced Saxon and fueled their success.

Saxon was one of the bands in the late 70s and early 80s who led the charge for the “New Wave of British Heavy Metal” and were responsible for penning some of the most enduring metal anthems of our time, like “Denim & Leather,” “Strong Arm of the Law,” “Power and the Glory,” and “Princess of the Night.” The band has been faithfully going strong for over 44 years and doesn’t show any signs of slowing down.

Correspondent Robert Cavuoto spoke to Biff Byford about the new album, how it was done for fun during the COVID-19 lockdown, which songs he would consider adding into their live set, and his upcoming album with his son! For more interviews and other daily content, make sure to follow Sonic Perspectives on Facebook, Flipboard and Twitter and  subscribe to our YouTube channel to be notified about new content we publish on a daily basis. 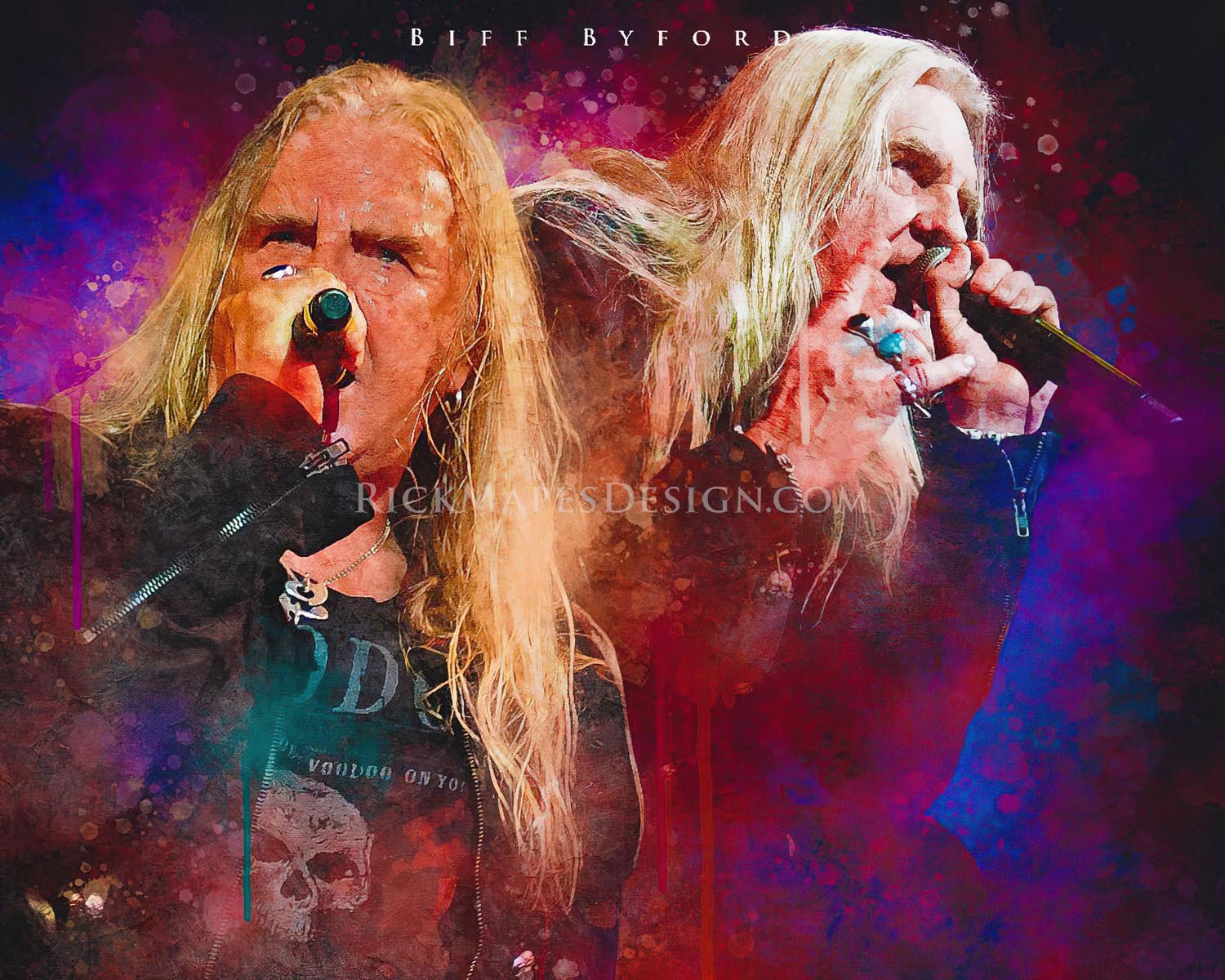 Tell me about the importance that these songs played in forging Saxon’s musical career and direction?

I think every song has a bit of a story to it. Sometimes the song inspired us some times it was the bands who inspired us. They paved the long road to fame and fortune or not [laughing]. It’s not just a cover album; every song is linked to Saxon and the members in some way and what we have become today.

You kept the integrity of the original versions and didn’t rework with them. Was that a conscious decision you made from the start?

We didn’t want to work out different arrangements and styles of the songs. We just played them in the Saxon style, which was a little heavier for some of them while others are a bit more up-tempo. We took out the organ and keyboards to keep purer to the song. We didn’t want to go too far down that road of changing them into something else. 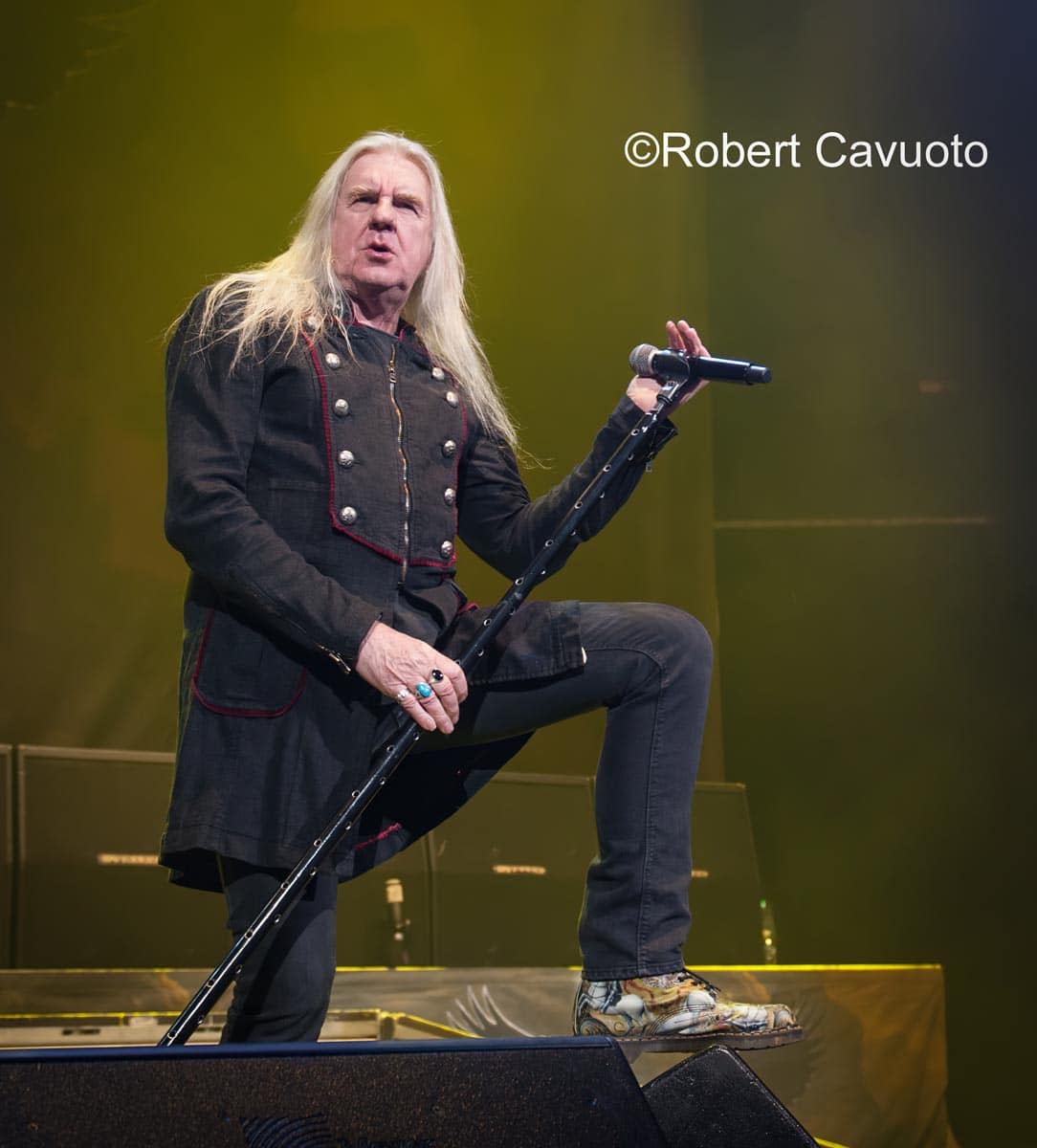 We have spoken many times over the year, and you have told me that you are always writing. What was the decision for putting out a cover album instead of an album of original content?

One of the points was to have some fun! We are in a heavy lockdown here in the UK. You can’t go to a restaurant. All you can do is shop and takeout food. It’s very restrictive, and we figured we have to do something together. Although we talk to each other quite a lot, we haven’t played together since last March. It was an idea I had to be fun and make an album of the songs that meant a lot to us when we were teenagers. A friend of mine owned the house where it was recorded. It had been empty for two weeks so we decided to do it then. It was a very powerful thing we did; it felt like we were in the 70s recording.

Was this process easier than writing new songs?

Well, we don’t have to prove that the songs are great [laughing]. We didn’t have to write, but my emphasis was on producing the album, the excitement of getting together, and recording. To do it, live in the house where we all lived, cooked, and hung out. It was a great bonding experience. It was a great feeling to play them in this big old house. I have to imagine this is what it must have been like for Deep Purple to record at the châteaux in France.

Tell me about the selection process for these songs and who picked which song?

Most bands would listen to this “Inspirations” album and think we got it right [laughing]. We could have done more of the well-known songs like Deep Purple‘s “Highway Star,” but I wanted to do “Speed King” because that song influenced me more since I like to write songs about speed. We could have done “Rock and Roll” by Led Zeppelin, but everyone does that one. I wanted to do something to stretch my voice more. It was quite a challenge to do “Immigrant Song.” It’s not a karaoke album; it’s an album of Saxon playing songs that meant a lot to us. 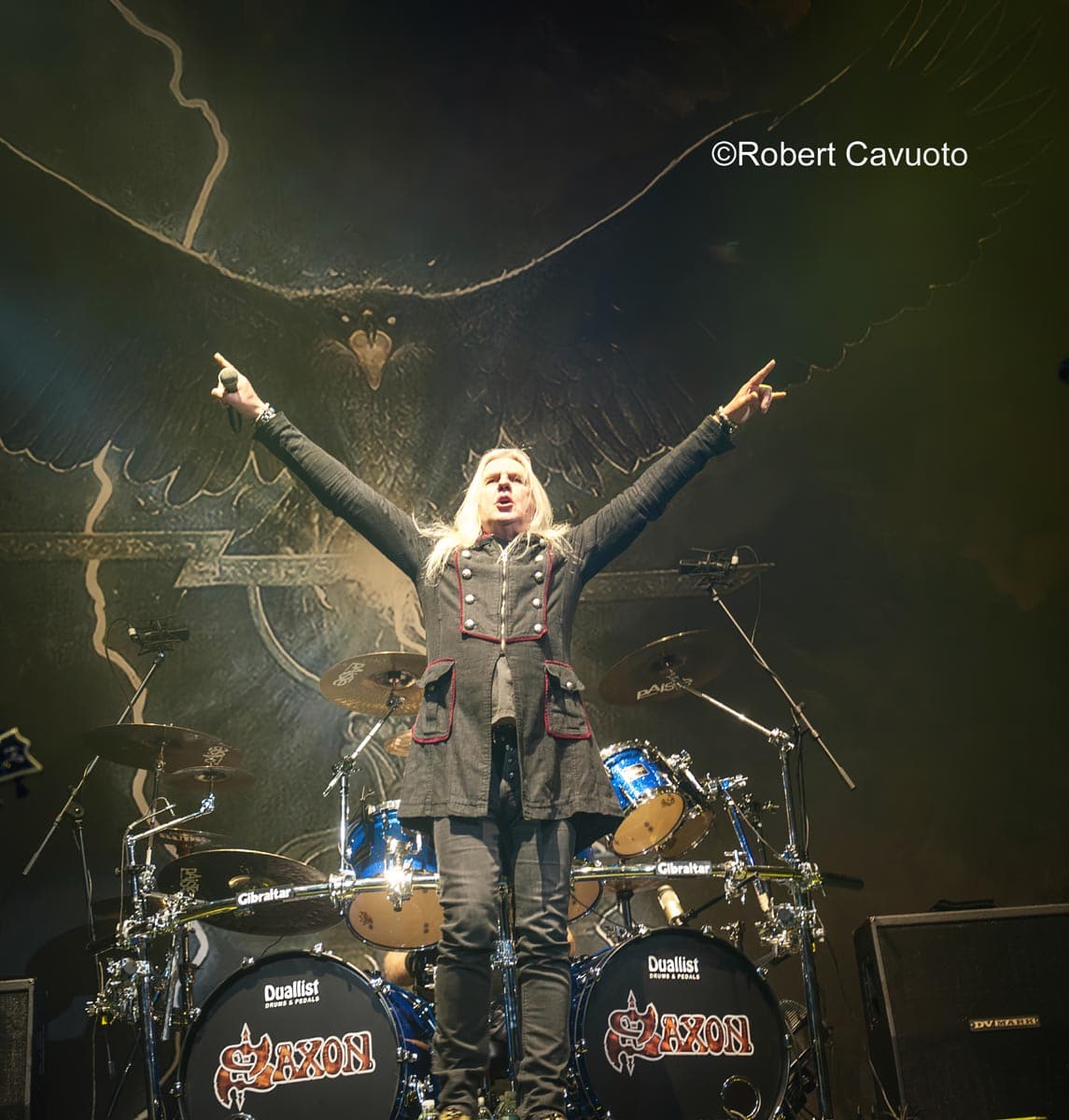 You did a tremendous job on the intro scream for “Immigrant Song.” Was that something that took some practice to nail?

To tell you the truth, I did the vocals when my son was in control of the mixing desk. I sang everything three times, and we took the best version. We rehearsed the songs, but I didn’t sing them very much. I did the vocals after the band recorded their parts. I just went in and sang my heart out, and I think it worked really well [laughing]. My voice was in very good condition, and I was able to bring it to these songs, which worked out quite well.

Considering you haven’t been on tour in almost a year and have rested your voice when it comes to recording songs, is your voice better when it is warmed up when it’s cold?

My voice is my voice. It’s like a separate entity. It does its thing, and I’m lucky when I turn it on, it still works [laughing]! Hopefully, it will stay the same for a long time to come. It really hasn’t changed a great deal over the years. I’m very fortunate.

What did Led Zeppelin mean to you growing up, and have you ever met Robert Plant or Jimmy Page?

I never met Robert Plant. I have said hello to Jimmy Page a couple of times. Jimmy seems to be out and about a little more while I think Robert is more of a private person. I’m a fan of all their albums and was hooked from their first one. I wasn’t even sure if I could do “Immigrant Song,” but it turned out to be a lot of fun. The song is about Vikings, and those lyrics appealed to me because I like to write about warriors and history. We did it in the same key as Zeppelin; we didn’t lower it, which is pretty cool. 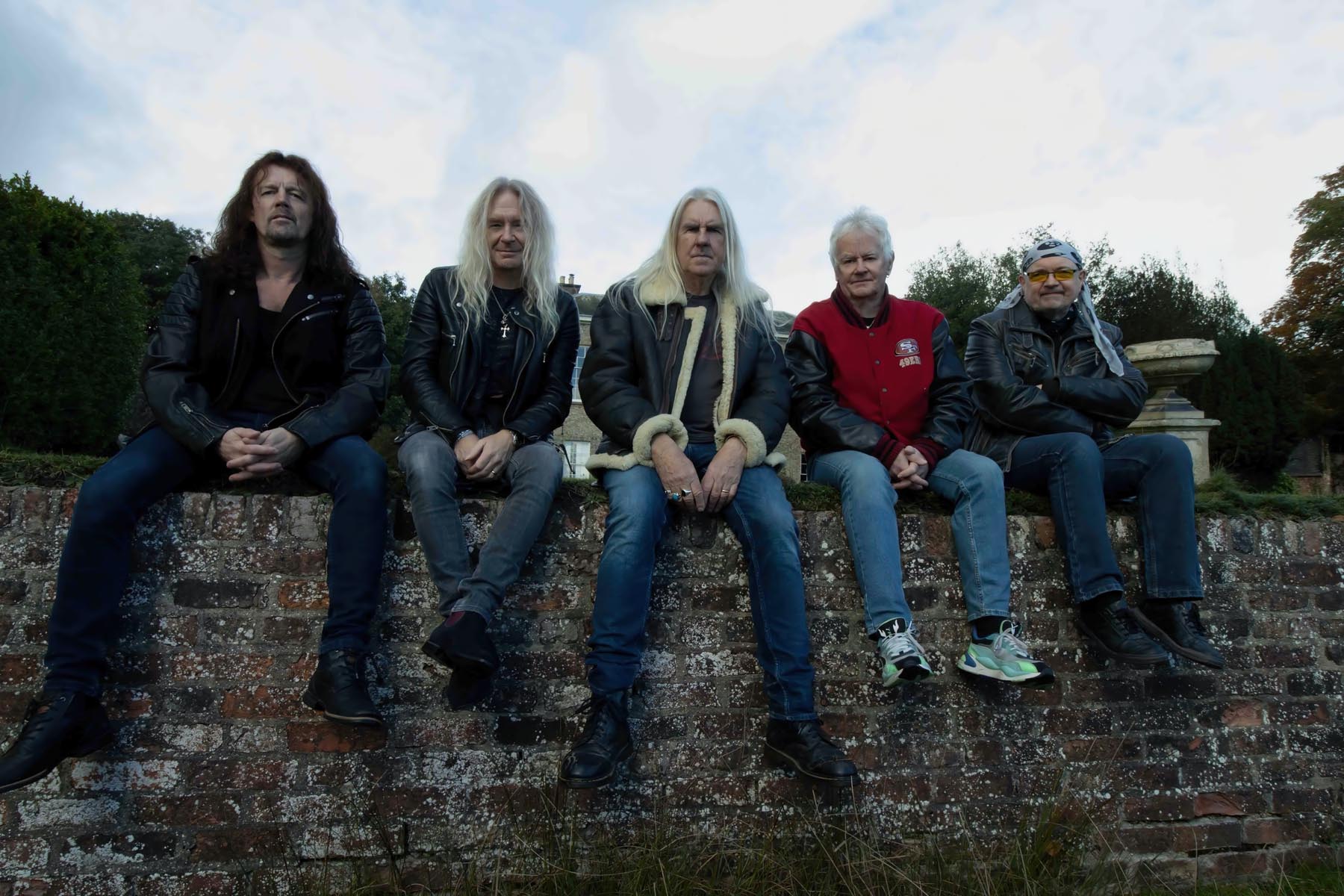 What were some of your other song selections?

The weirdest one might be the Toto song “Hold the Line,” and people might not understand. Toto didn’t influence us, but we did like the guitar riff and the way it’s played on that song. Steve Lukather should have played it more like a two-note chord. Saxon incorporated that style of moving up and down the neck in that chord position like “747 (Strangers in the Night)” and “And the Band Played On.” I wanted to add that song as it meant a lot to us when writing and playing guitar at the time. Their version is very AOR, and ours is straight hard rock. I wanted to make the song like we had written it. I kept the singing very straight and to the point, so it doesn’t lose anything. It sounds different as there is no piano on our version. Paul transferred the piano parts to guitar. I’m sure Mr. Lukather will like it! I have met him a few times and told him we ripped him off on that style of guitar playing, and he was quite happy about it [laughing].

AC/DC’s “Problem Child” came out really well, people think their songs are easy to play, but they are far more intricate to perform accurately. Did you notice that when rehearsing and recording?

Someone either gave me the band’s first album, or I stole it back in the 70s. The thing with AC/DC is that they are groove monsters. Their songs are all about feel. You have to get the groove right. You have to get the guitar sound right. I have two guitars, a 1965 SG Junior and a 1974 SG. Paul and Doug used those two guitars, so we got that AC/DC Gibson sound. I think we cracked it open a little louder than AC/DC [laughing]. During the “Dirty Deed” album and tour, they played near Sheffield, where we used to live. I told the boys that we have to go and see this band. It must have been around 1976 or something. They played “Problem Child,” and when I thought about doing this “Inspirations” album, I thought it was important to add that song because I heard it so many years ago.

What was it like to see the AC/DC with Bon Scott? Singer-to-singer what did you think of him?

He was great. He was all “head voice” and all from the throat. It was a terrific front-man, but he didn’t say a great deal in-between songs. He was also very charismatic. He and Angus Young knew how to work the stage. Bon would go to the front, Angus would go to the back, then Angus would go to the front while Bon backed-up. Their stagecraft was perfect at the time. I loved them. They first started coming to the UK in the 70s when they were coming up; they gave 100% every time. I met them a few times as they would come and hang out with us in the 80s when “747 (Strangers in the Night)” was in the charts for “Wheels of Steel.” A lot of AC/DC members used to come to see live us, especially Malcolm Young. We knew them well as we shared the same agency at the time. They are still a great band. 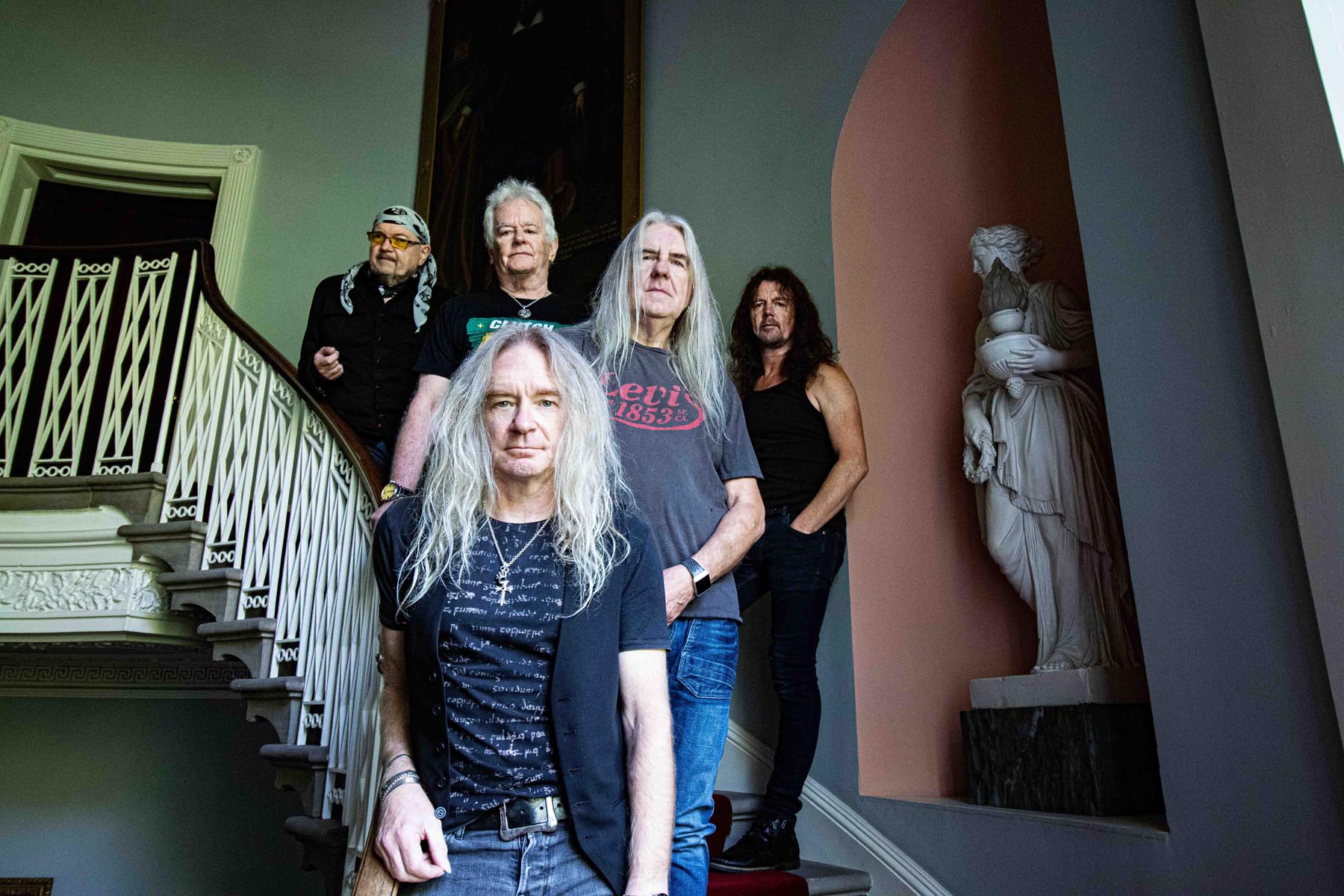 When concerts start to take place, which of these songs do you think you would think fit nicely in Saxon’s setlist?

I think all of them [laughing]! We might add a couple of cover songs on the next Saxon tour if people want to hear them. Maybe do “Problem Child,” “Immigrant Song,” or “Speed King” as an encore. Obviously, we are waiting to see what happens with things as the UK as we are getting there on the vaccination front. America is doing well too. Which country will be the first to have concerts: I don’t know.

What is next for you with new materials?

The next album will be with my son, and it will be called Biff & Seb! Hopefully, we will talk again in the next few months when that one comes out.

That would be terrific, and I look forward to it!