Elephants of Scotland is what we could call a fairly new progressive rock band, however their success in rock scene has been nothing short of meteoric. Formed in 2010 in Burlington, Vermont, by multi-instrumentalist, composer, keyboardist and vocalist Adam Rabin, their formidable, rich, futuristic and convoluted sound mixing; the complexity of classic, symphonic-prog with the modern tone associated with the Neo-Prog genre, is getting them to be noticed, and rightfully so.

During the course of the last 5 years they released 2 studio albums and one live CD/DVD album, played in well-known venues such as RoSfest and the Terra Incognita Prog Rock Festival and received standing ovations, growing a fan based purely out of the quality of their music and the power of their live performances. Their latest album entitled “The Perfect Map” saw the light of day last June, and thus far has garnered rave reviews from fans and critics alike. I had the opportunity to sit down and talk with Adam Rabin about how the journey has been thus far.

Starting this interview in some sort of a chronological order for our listeners… can you give us a little bit of history and tell us how you got involved with music in the first place?

Oh, we’re going way back! I was a creative child. I always wanted to make things and come up with new ideas and I’m still like that. I started taking lessons when I was 8 years old on an old electric organ with foot pedals and everything. About a year later, I quit the lessons but kept playing and making up melodies and chord sequences. In my teens I got into drums and guitar and that’s when the creations started taking shape as complete songs. I was playing and writing with friends and that’s how it’s been for several decades now.

I’ve read the origin of the Elephants of Scotland lies in the ashes of a cover band named Hot Neon Magic. What’s the history behind the inception of current band and such an original moniker?

I met Ornan McLean and John Whyte through the cover band. I joined the band as a way of getting my performance chops up and, mostly, as a way to get out and meet people and have some fun. The three of us quickly found that we had a lot in common in terms of musical tastes. We would often break into a Rush jam in the middle of band practice when we were supposed to be learning Flock of Seagulls. it was a natural progression to splinter off from the cover band and do an original project. We all stayed with the cover band for a few years. We rounded out the line-up with Dan MacDonald who had put an ad online looking for a band. The band name is just that: a band name. It doesn’t have too much meaning to it. I just like that it’s memorable and that it represents something that doesn’t actually exist. 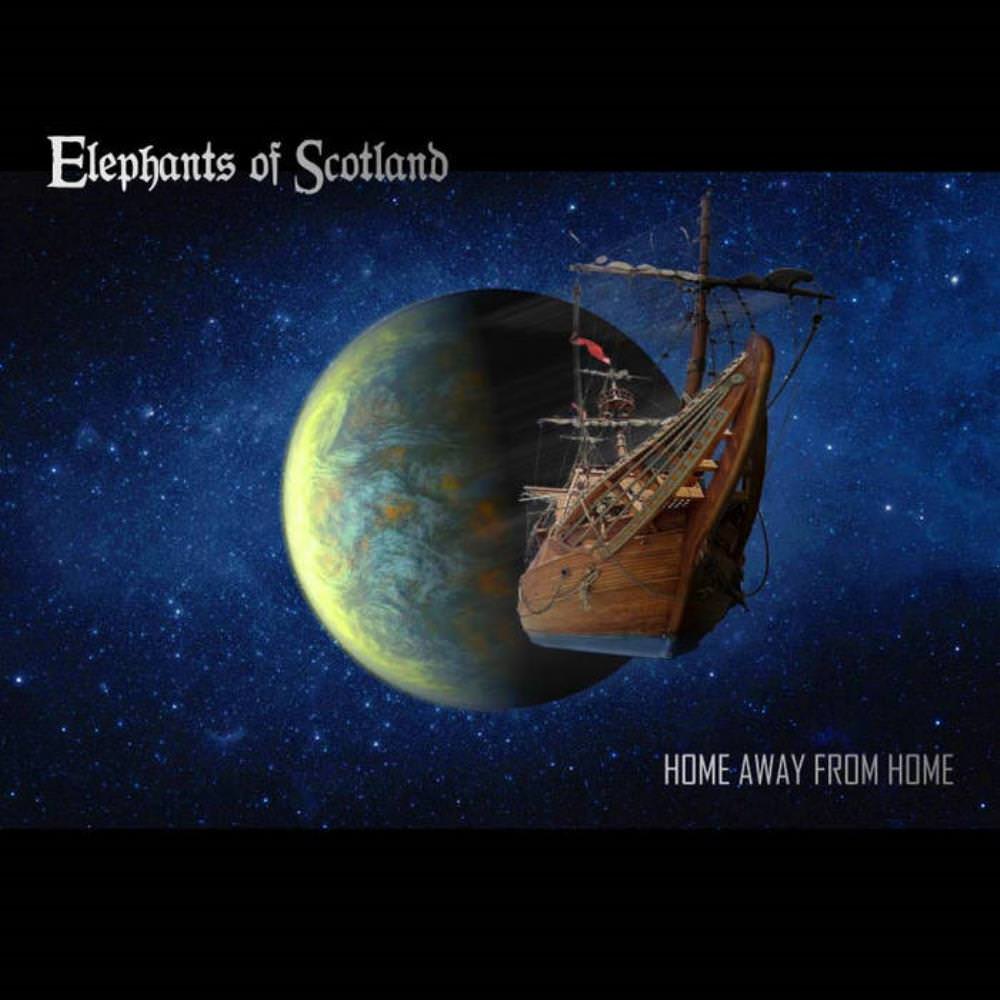 “Home Away from Home” Album Cover

I discovered your first album “Home Away from Home” and before even delving into the music I was impressed by the beauty of the cover portraying an ancient ship sailing away from a planet into the universe, is there a message you guys wanted to convey with the artwork?

The cover was inspired by the lyric for “Starboard” which is about a man who sails his ship off the horizon. Throughout the lyric, the captain of the ship is struggling with old thinking and new thinking; faith and science; rebellion and surrender. That’s why I went with a futuristic looking space-scape mixed with an antique style vessel. The juxtaposition speaks to the protagonist’s ambivalence.

On the strength of that album alone came the invitation to play at RoSfest in 2014, a 90 minutes performance that received a standing ovation and was later immortalized as a live album/DVD package. How did it feel to be invited and to play in one of the most important (if not the most) prog-rock festival in the US?

Overwhelming, to be honest. We hadn’t totally grasped how big a deal it was to play RoSfest until we were there. We all had a great time and appreciated being treated like kings for a few days. It was an experience I’m sure we will all remember for the rest of our lives.

I feel there was a natural progression and cleverness in the compositions of the second album “Execute and Breathe”, I sense it like a more organic record, even though they are somewhat unlike. How different was the recording of “Execute and Breathe” from the experience with the first effort?

The first album, Home Away From Home, was mostly written before the current line-up of the band solidified. We recorded the album mostly just to see if we could. We wanted to record the album for our own enjoyment with no intention of selling many copies – just for the fun of it. With Execute and Breathe we wrote and arranged more as a band. That album is very much the four of us contributing and creating a sound as a single unit.

Last year the band performed at the Marillion Weekend Festival and the Terra Incognita Prog Rock Festival in Quebec City, in which can be considered milestones for such a young band in an overcrowded genre like progressive rock. How do you feel about these achievements?

Those two shows, about a month apart, were probably the most fun we’ve had as a band. Where RosFest was overwhelming and massive, the two Quebec shows were (relatively) intimate and the love in the room at both shows was tangible. They didn’t feel so much like “achievements” but more experiences. Experiences we had the good fortune to share.

How could you describe the role of Greg Skillman as what could be called the fifth member of Elephants of Scotland and for how long he has been an integral part of the lineup?

Greg and I have known each other for over 25 years – long before Elephants of Scotland came together. The two of us have been writing together all that time with our own personal projects. It’s rewarding that Greg and I have been able to share our strange concoctions with a larger audience now that Elephants of Scotland is doing so well. He and I have similar outlooks which is why I think our lyrics fit well together on the albums. But his approach is more impressionistic and bizarre than mine. His brain and pen go to some far out places but always with a purpose. He lends an important uniqueness to our voice. He doesn’t actually listen to much Progressive Rock so his take on things comes from a truly different angle.

There are three accomplished vocalists in the band. How do you guys decide which song is a better fit for each one of you as a lead vocalist?

Each of us have our strengths and ranges. Dan and I sing mostly in the same range but his voice has a bit more grit to it so he will usually get the more rocking tunes like “A Different Machine.” John’s voice excels at a higher range so songs like “Starboard” and “Mousetrap” suit him the best. It comes down to who fits a song best, that’s really it. When we recorded “One By Sea” for the new album, I had been singing it at practice because I tend to take the softer tunes but even then we knew we could do better so we brought in Megan Beaucage to take the leads. We knew her from Hot Neon Magic where she rocked the Benatar and Lauper. 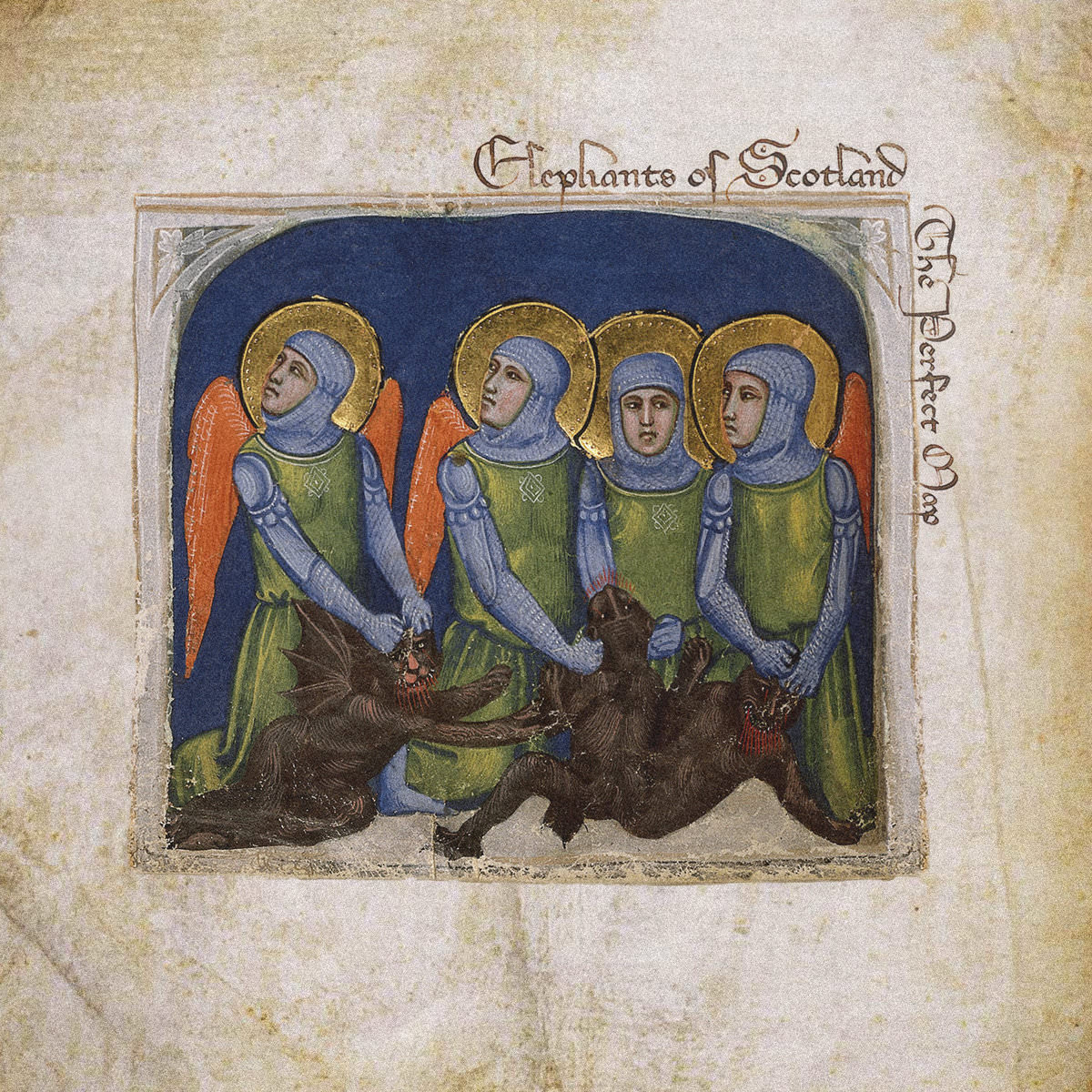 Your latest album was released last June, bearing the title “The Perfect Map”, and considering how new it is I’d like to know more about it, so I have three questions sort of stitched one to another: What’s the meaning of the title, I mean, what was the reason why it was chosen and how the title relates to the music contained in the record? Is there an underlying story with the album cover and the medieval subject displayed throughout the booklet? How the recording process of “The Perfect Map” took place, what impact it had for the band as an entity and for each one of you as individuals?

Just as there are no Elephants in Scotland, there is no Perfect Map. There is no single correct way to go about living or thinking. It’s a fool’s errand that we look for Truth. I don’t think it exists but we still go about looking for it. Things keep changing, targets keep moving, thinking evolves (hopefully). So that was the underlying thought behind the album. The songs all seem to speak to this journey, this hunt we all seem to be on.

The first song we recorded was “Swing the Gavel” which was for The Decameron compilation album. The story behind the lyric is from a 14th Century Italian book so that’s where the medieval artwork came. I found the image for that song from an ancient printing of the book. I liked the aesthetic of it so I used that as a starting point for the rest of the artwork. I enjoy doing album art for projects I’m involved with because it helps tie the songs together and make the ideas contained on the CD more tangible.

We spent about a year writing and recording the album and it was a hell of a year for all of us personally. We all dealt with deaths, divorces, moves, and other big changes. Again, things keep changing and we have no say in how exactly they change. The recording process didn’t have an impact on us. It was more the other way around. The recording was affected as much by the music as by our personal lives.

Do you feel comfortable by labeling the band as a neo-prog band?

Me? I’ve never labeled us that. We didn’t start hearing that label until well after our first album came out. Funny thing, I actually had to search the web to figure out what it meant. The best I can tell is that neo-prog refers to bands that focus on songwriting and emotion. If that’s the case then I’m fine with it. I think it fits.
I get the need to label genres and sub-genres. I really don’t have any issue with it. It has helped us find and expand our audience. The potential danger of labels is subconsciously letting them confine or limit ourselves. But I don’t see that happening.

Considering you guys have three studio albums under your belt already, what would be the next logical chapter for Elephants of Scotland? Are there any short-term future plans for a US tour?

Like you say, playing out. That’s our primary focus now. We have a local show coming up in a few months and we’re looking into getting back up North to play in Quebec again. We’re looking at a few other small tour ideas. It takes a lot of work and planning to organize these things given all our busy lives but it’ll happen. As for recording, Greg Skillman and I have some songs and ideas that we’re hoping to start sharing very soon. The two of us, as I mentioned, have a long history of writing together and each on our own. The music is not as squarely in the Prog genre as Elephants but I think our fans will still enjoy it.