Depending on your age it may be hard to believe, but today (July 21, 2019), Guns N’ Roses‘ Appetite for Destruction turns thirty two years old.

I was fourteen years old when Appetite for Destruction landed in 1987, arriving like a tsunami on the rock scene and blowing the glam out of the hair-band dominated scene. The album looked both forward and backward: The punky rawness of its sound and the pained artistry of its lyrics made it a bridge between commercial Eighties hard rock and the alternative music of the next decade. The title of the album was a reflection of the young, rambunctious rockers who had a magical chemistry, but were just as likely to spend their time taking drugs, drinking copiously, fighting one another or anyone in their way, getting arrested — or some combination of the above. It was also created during their own fountainhead of creativity. During this period in late 1986, the band would write much of the best material of their entire career, not only for this album, but for hit future albums as well.

Amazingly, the album was well received in its day both critically and commercially (a rarity for hard rock bands), and it reached the top of the Billboard album chart. Five months after its release, by December 1987, Appetite for Destruction had sold about 200,000 copies, with minimal radio airplay. At the moment of this article is the 11th best-selling album in the United States, and with about 30 million copies sold worldwide, it is also one of the best-selling records ever made and the best selling debut album ever recorded by any band. Appetite for Destruction introduced a band that anyone who loved rock’ n’ roll could agree on. The metal-heads loved the aggression, the glam fans fawned over their looks, the punks aligned with their rebellion, and the purists savored their blues-based riffs. 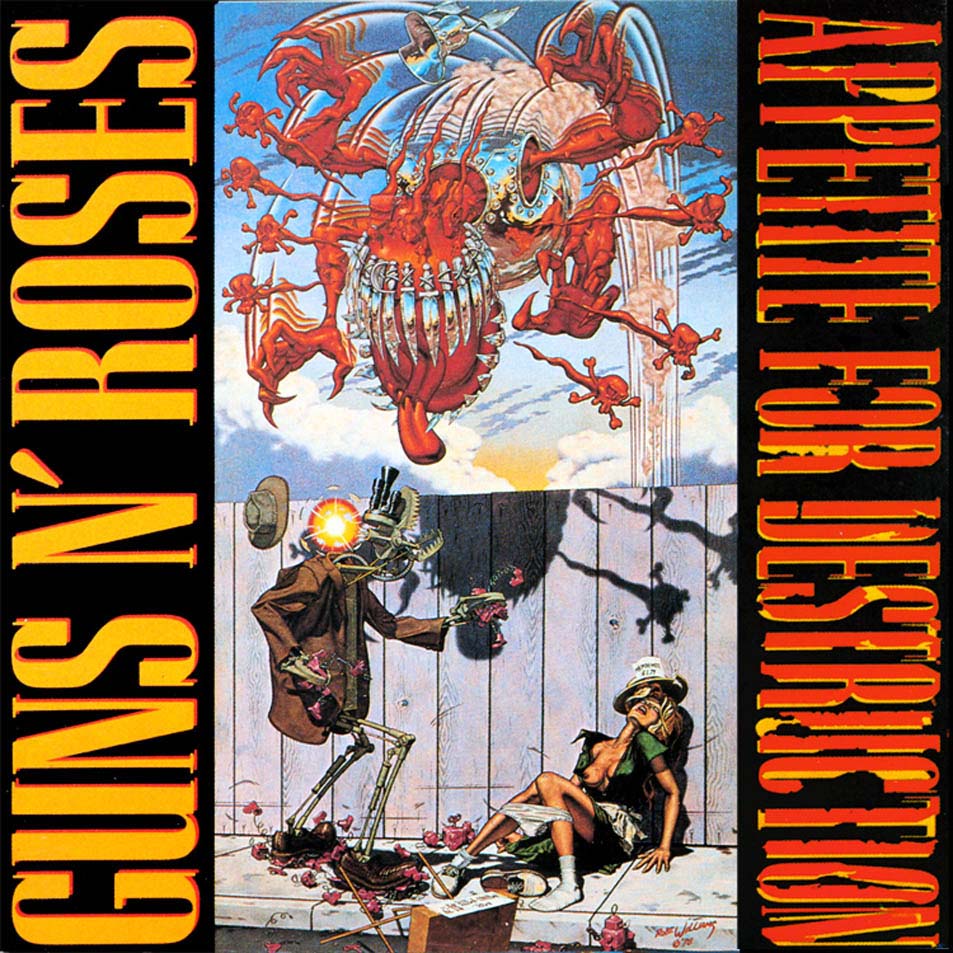 The album’s originally planned cover art, based on Robert Williams‘ painting Appetite for Destruction, depicted a robotic rapist about to be punished by a metal avenger. After several music retailers refused to stock the album, the label compromised and put the controversial cover art inside, replacing it with an image depicting a Celtic cross and skulls of the five band members with, each skull representing one member of the band: Izzy Stradlin, top skull; Steven Adler, left skull; Axl Rose, center skull; Duff McKagan, right skull; and Slash, bottom skull.

There were a lot of bands in the ’80s who released timeless albums and jams we still remember, but none of them came close to capturing people’s attention like Axl and company. Appetite for Destruction instantly established Guns N’ Roses as a headlining band and gave them momentum well into the next decade. Although they would have subsequent albums, most especially the double release of Use Your Illusion I & II in 1991, this band would never again reach this level of importance and breakthrough originality.