The word “legendary” has been used to a large extent when introducing classic rock artists, but in Uli Jon Roth’s case, there isn’t a more appropriate adjective. He had a pivotal role in the Scorpions’ early years, being the lead guitar player on four amazing studio records and the legendary live album Tokyo Tapes. He left the band in 1978 to pursue his own vision, and became one of the flagbearers of the neoclassical metal genre.

Roth formed a band called Electric Sun which released three influential albums: Earthquake (1979), dedicated to the spirit of Jimi Hendrix, Fire Wind (1981), dedicated to Anwar Sadat, and Beyond the Astral Skies (1985), dedicated to Martin Luther King. Since then he decided to release albums under his own name, having composed four symphonies and two concertos, toured with G3 and revisited his tenure with the Scorpions on a few tours.

Currently in the middle of his biggest ever North American Tour, Roth found some time to discuss his lengthy career with our persistent collaborator Rodrigo Altaf. Enjoy their talk in the audio below – along with Rodrigo’s chronicle of his Toronto’s performance – and remember to subscribe to our Podcast in several platforms to listen and be notified about new interviews and contents we publish on a daily basis. 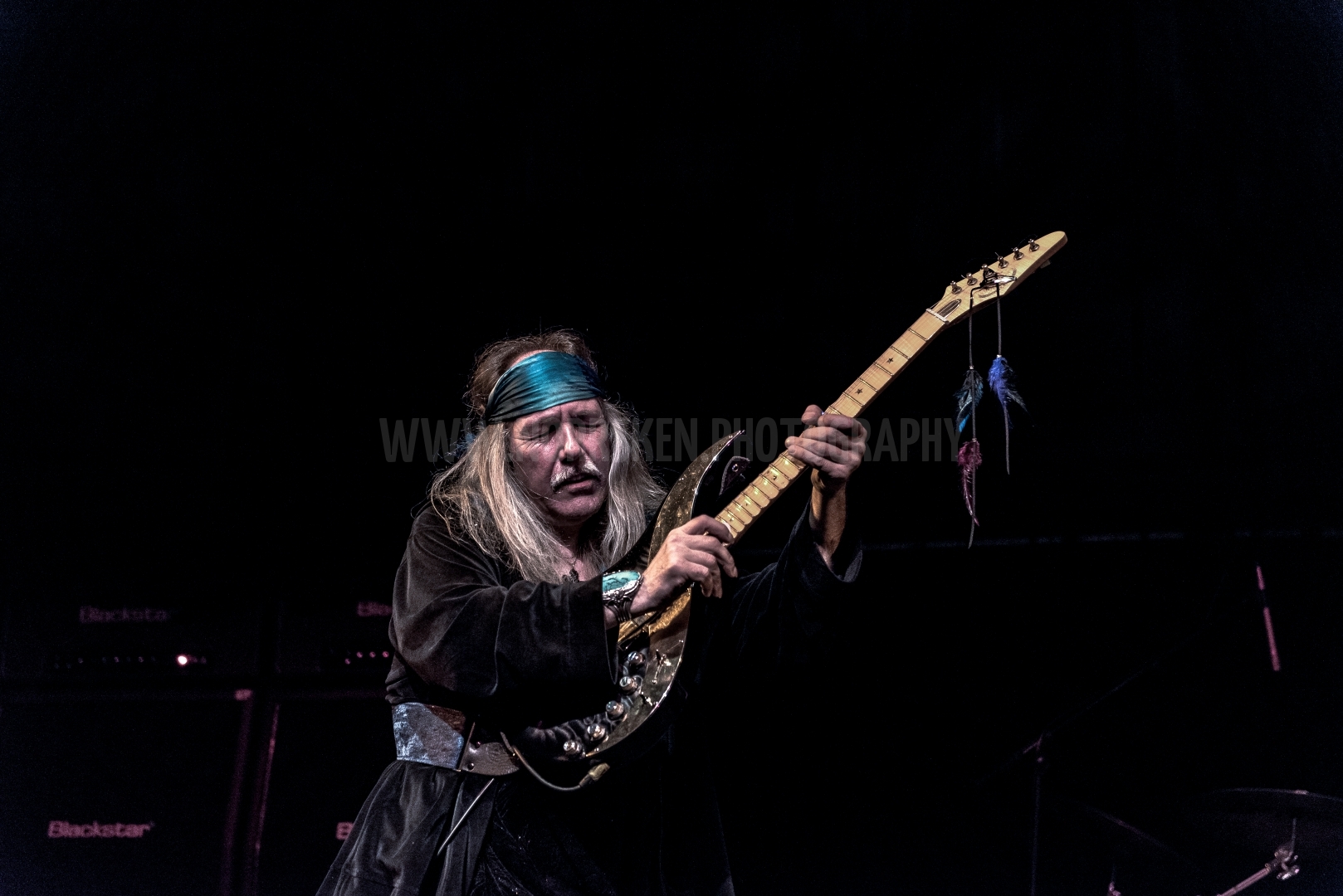 The Rockpile West has hosted a number of memorable shows throughout its history: from Blaze Bailey to Malmsteen, from L.A. Guns to Pat Travers, this venue has consolidated itself as a home for classic rock acts. Recently Uli Jon Roth once again graced the Torontonians with his presence at the traditional venue, this time celebrating fifty years of his first ever concert.

Uli is currently doing his most ambitious North American Tour ever, and he chose the occasion to play a career-spanning set. And although it’s a crime to book such an amazing show on a Monday night, the attendance was more than I expected. Curiously enough, at 44 years old it had been a while since I was the youngest person in any environment, but that appeared to be the case tonight. As I made my way into the front of the stage I could see some members of the audience sporting canes, and many of them had a lot more salt than pepper on their heads.

The virtuoso guitar player hit the stage around 9 PM, but those that paid for the meet and greet were graced by an afternoon performance of the spectacular “Metamorphosis Concerto” for 7-string Sky Guitar and Vivaldi’s 4 Seasons Concerto, which Uli hadn’t performed since 2004. For those interested, there was also an option of a meet and greet after the concert, and a tour bus experience limited to 9 people.

The first half of the main set consisted primarily of Uli’s material with Electric Sun, including the quasi-metal “Indian Dawn”, the existentialist “Why?” and the jazzy “I’ll Be There”. Sporting a corduroy suit, dream-catchers and feathers around him, the ever-so-nice Uli showed why he is still one of the most influential players of our time. On many licks and solos during the night it was palpable how players such as Jason Becker, Chris Impellitteri and many other neoclassical shredders read a page or two of Uli’s book. He also found time during the first set to pay homage to his late brother Zeno Roth, with a spirited cover of his song “Don’t Tell the Wind”. The trippy blues of  “Sun in My Hand” was also a highlight, as well as set closer “Enola Gay (Hiroshima Today?)”, a politically charged epic which had many mood shifts and tone changes, with images of a young Uli playing a Stratocaster on the screen. At the end of this part of the show, the maestro said “we will take a short break to recuperate. We got all the serious stuff out of the way, so after work it’ll be all fun and games”. 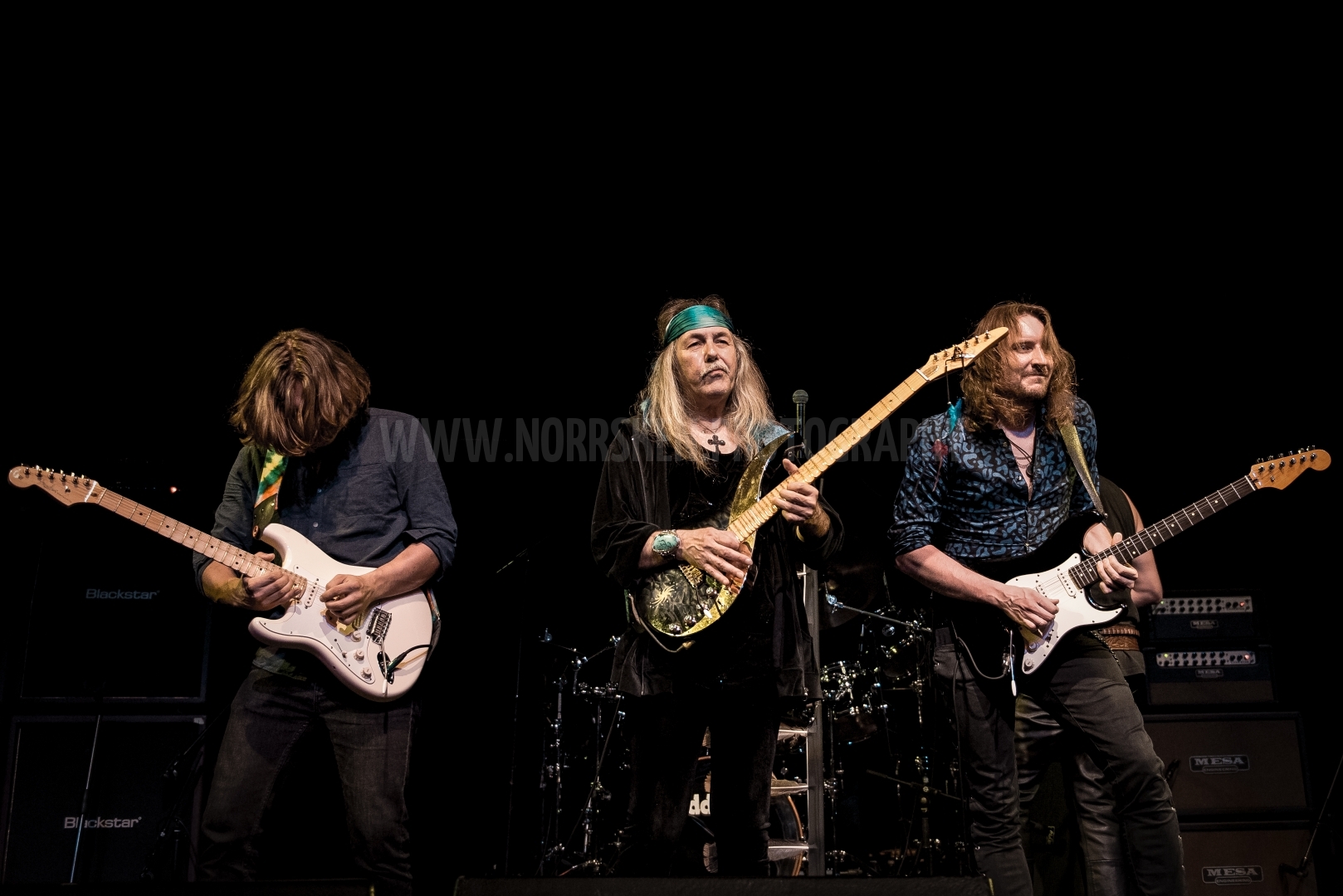 Uli was right in his assessment, because after the break it was fun and games indeed. Kicking off with the poignant “Passage to India”, played by him with an 8-string flamenco Sky Guitar, the second half was 99% Scorpions, with only two exceptions: the classic “All Along the Watchtower”, written by Bob Dylan and immortalized by Hendrix, and “Apache”, a song he played on his first ever concert, fifty years ago. To make matters even more special, he even brought out the guitar he used on that first concert. And if his backup band was pivotal on the first half, this was even more evident on the second part of the show, with Niklas Turman and David Klosinski adding a second and third layer of guitars. Niklas in particular shone throughout the night, with sharp vocals which did not try to emulate Klaus Meine’s delivery, but had an identity of its own. The audience tripped on “In Trance”, watched in awe during “Yellow Raven” and vibrated with set closer “The Sails of Charon”, by far the most revered song in Uli’s catalogue.

Whether you’re a long time fan of the Scorpions and Electric Sun, or a millennial with an interest in neoclassic guitar, or even if you’ve never heard of the man, this is a concert not to be missed. There are still a handful of North American dates before Uli hits the European summer circuit, so catch him while you can!