Steven Wilson is currently touring on his most accessible and pop-oriented solo release to date. To the Bone seems to be the exposure breakthrough Wilson has been hoping for quite some time, landing interviews on British Morning TV and numerous online interviews and articles. Many of the shows on the tour are selling out, but in this more difficult era of trying to make a living off live music and merch, it is yet to be seen if this expensive live presentation will translate into financial advancements for Wilson.

An online promotional clip touted the merits of the production that accompanies this performance. Unfortunately, in Denver, it was not without a few glitches and compromises. According to an apologetic comment from Wilson, the full scope of the production had to be scaled down to accommodate the Ogden Theater’s stage. The show then began with a false start, where an intro video was restarted, with nervous giggles erupting when the voice wafting through the PA started to say the exact same thing a second time. The glitch was soon forgotten, though, as the band blazed into the opener, “To the Bone,” followed by “Pariah.” Nanet Tayeb’s vocals were flown in by backing tracks, synced to a large visual of her face projected on a mesh screen residing in between the band and the audience. Many background vocal sections also erupted from the rear of the audience throughout the evening as part of the quadraphonic presentation.

The first set was steady and strong, with the barefoot Wilson working the stage and alternating between electric guitar, bass, and keys. Nick Beggs, ever the spectacle on stage, commanded his many-stringed Chapman stick thing, as well as a variety of basses and occasional keys. Adam Holzman delivered his usual demure stage presence that provided an endless onslaught of sonic tapestries and Hammond sounding solos. New guitar player Alex Hutchings was perhaps less of a spotlight stealer than previous Wilson guitar slinging sidemen, but he played very articulately and with exceptional taste. Craig Blundell propelled the music forward, sneaking in extra hits and smashes among the regular timekeeping to keep the beat both interesting and entertaining.

The first set was comprised primarily of material from Wilson’s last two solo releases. “The Creator Has a Mastertape” was the sole Porcupine Tree (Wilson’s former band) companion of the first set. Prior to “People Who Eat Darkness,” Wilson took the opportunity to announce to younger ones in the audience that the electric guitar as one man’s greatest inventions, and that he hoped to see rock and roll make a rediscovery and resurgence, especially among the young. A spectacular rendition of “Ancestral” closed the first set and the band disappeared for a 10-minute break. 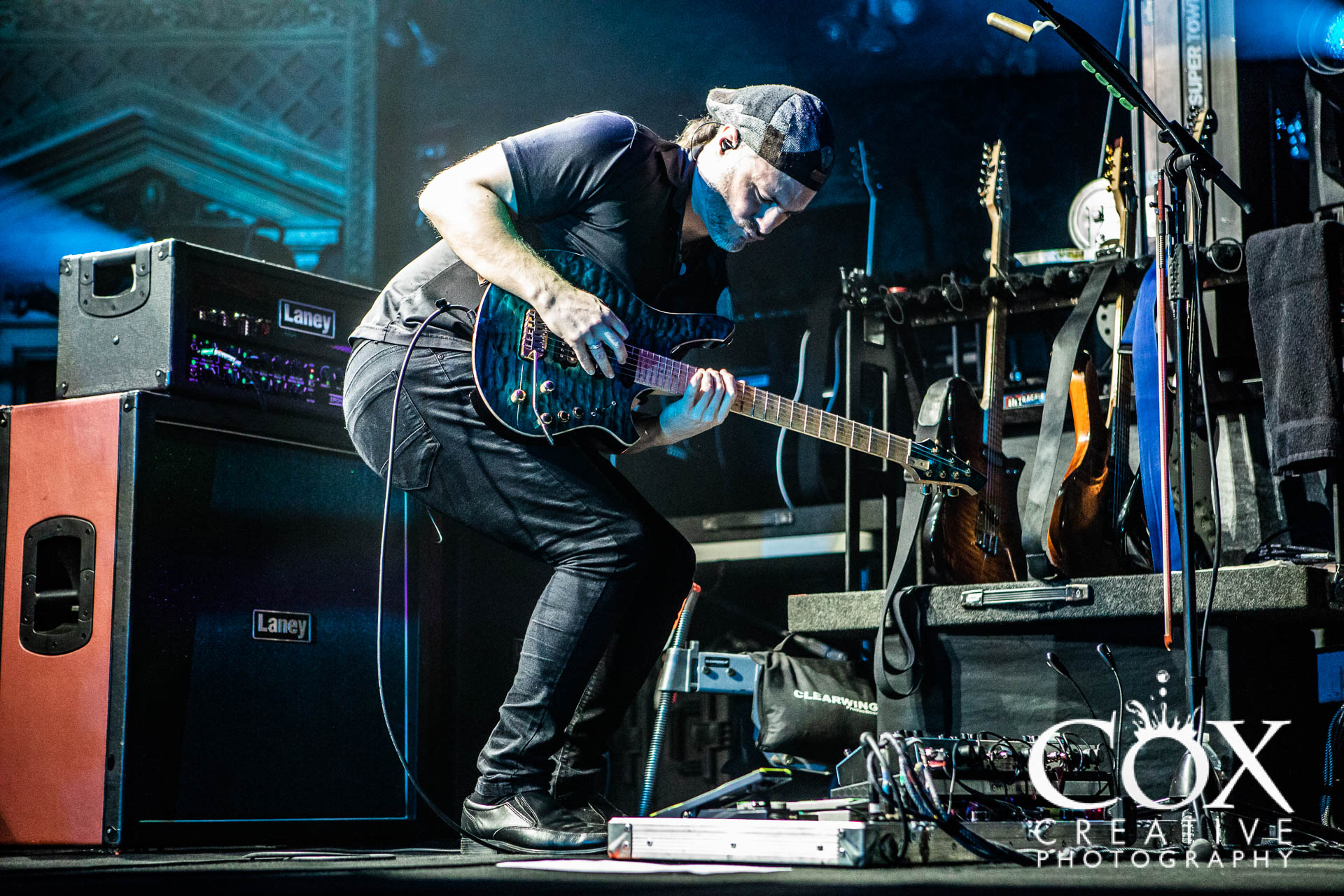 Alex Hutchings on the six strings

Sadly, the technical glitch gremlin returned in the midst of the instrumental crescendo of “Arriving Somewhere Not Here,” which opened the second set. The track was plodding along very intensely when suddenly the majority of the amplified sound cut out for about 20 seconds and then suddenly punched back in. The track was powerful and remains one of Wilson’s finest moments. The rest of the second set was smooth sailing.

“Permanating” was introduced with no apologies for its vibe of pure joy and celebration, and the crowd was swept along with its dancy beat and swirling rainbow of colors. While “Song of I” is easily my least favorite song on the new record, it featured a very effective video accompaniment that elevated the live version to new heights. Their polished version of “Lazarus” was smooth and easy. Wilson lauded the impact of Prince on him before performing the falsetto heavy “Same Asylum as Before,” and once again the background vocals were a jarringly loud unexpected surprise coming from behind.

“Heartattack in a Layby” was particularly delicate, and the closing progression of vocal layers sounded fantastic. The band closed the second set with a grinding version of Porcupine Tree’s “Let’s Sleep Together” that was a heavy, sludgy groove. After the predictable clamor for an encore, Wilson returned to perform a solo rendition of “Even Less.” Wilson commented that it was one of his proudest moments as he was getting into writing songs because it worked in its simplest form still. While that is true, the recorded and arranged Porcupine Tree version is vastly superior to the jankly version he played with just an electric guitar that night. 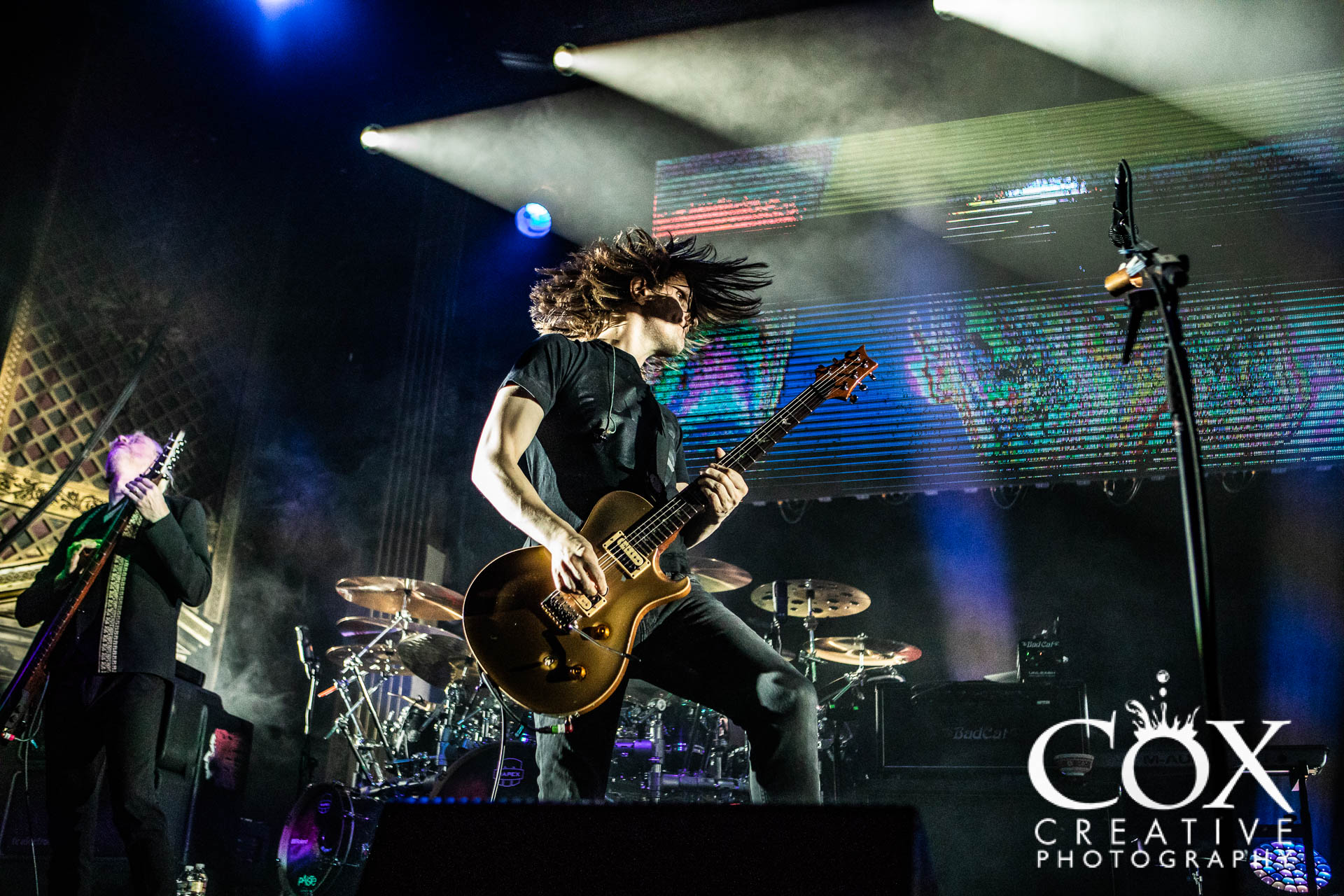 The band kicked back in for a powerful version of “The Sound of Muzak,” another Porcupine Tree classic that was particularly solid thanks to the groove of Craig Blundell. This brought the crowd to its feet. Ever the master of dynamics, Wilson concluded with a brief commentary about his lack of faith in religion but his recognition that this life is a gift and it is our responsibility to do something extraordinary with it. He closed with a magnetic version of the pensive “Song for Unborn” that was augmented by stunning visuals and left the crowd in a trance.

As people spilled out of the venue onto the sidewalk after the show, a multitude of conversation could be overheard, all about how strongly they felt about the show they’d just seen. Despite Wilson’s decidedly more upbeat tone of his show, including the removal of some of the more horrific and shocking visuals that have been part of previous tours, he continues to make a dramatic impact on his audience. Moreover, despite his disdain for the label of Prog, he remains at the front of the pack in terms of keeping the genre relevant, fresh, and possibly even somewhat commercially acceptable.