Seattle melodic prog-rockers Queensrÿche can tell a tale or two about line-up changes, revival and resilience. After surviving the infamous legal drama which ended up with the booting of founder vocalist Geoff Tate, Michael Wilton and company brought in Todd LaTorre to handle the daunting task of replacing their iconic voice of three decades, breathing a much needed new air into the band’s ranks. It’s now 2019 and after a widely acclaimed album release with The Verdict, Queensrÿche are amidst a full headlining North American tour, counting with the brilliant company of prog-metal forefathers Fates Warning as the opening act.

Returning to mainland after the annual Monsters of Rock cruise extravaganza, Queensrÿche began their set of tour dates at The Plaza Theater in Orlando, and landed at The Culture Room in Fort Lauderdale last Sunday. It remains unbeknownst to me why such bill didn’t happen in a much larger location at the same town – like Revolution Live for instance – nonetheless the small venue was very crowded in earnest, while the audience awaited Fates Warning to hit the stage.

The Connecticut pioneers of the progressive metal movement set the night in motion with “From the Rooftops” off their latest offering Theories of Flight, receiving a warm welcome from the hordes of concertgoers swarming the small club. Despite Ray Alder and his band-mates barely had space to move around – as Bobby Jarzombek drum-kit was placed very close to the edge of the stage – since the first note hit the airwaves it was palpable the band was out for blood, packing their usual stellar musicianship with lots of dynamism and vigor. After an absolutely on-point execution of “One”, Ray Alder addressed the audience saying: “Hello there, Fort Lauderdale! It’s great to be back in Florida. It’s been nine long years since we played here for the last time, so let’s make this night count!” 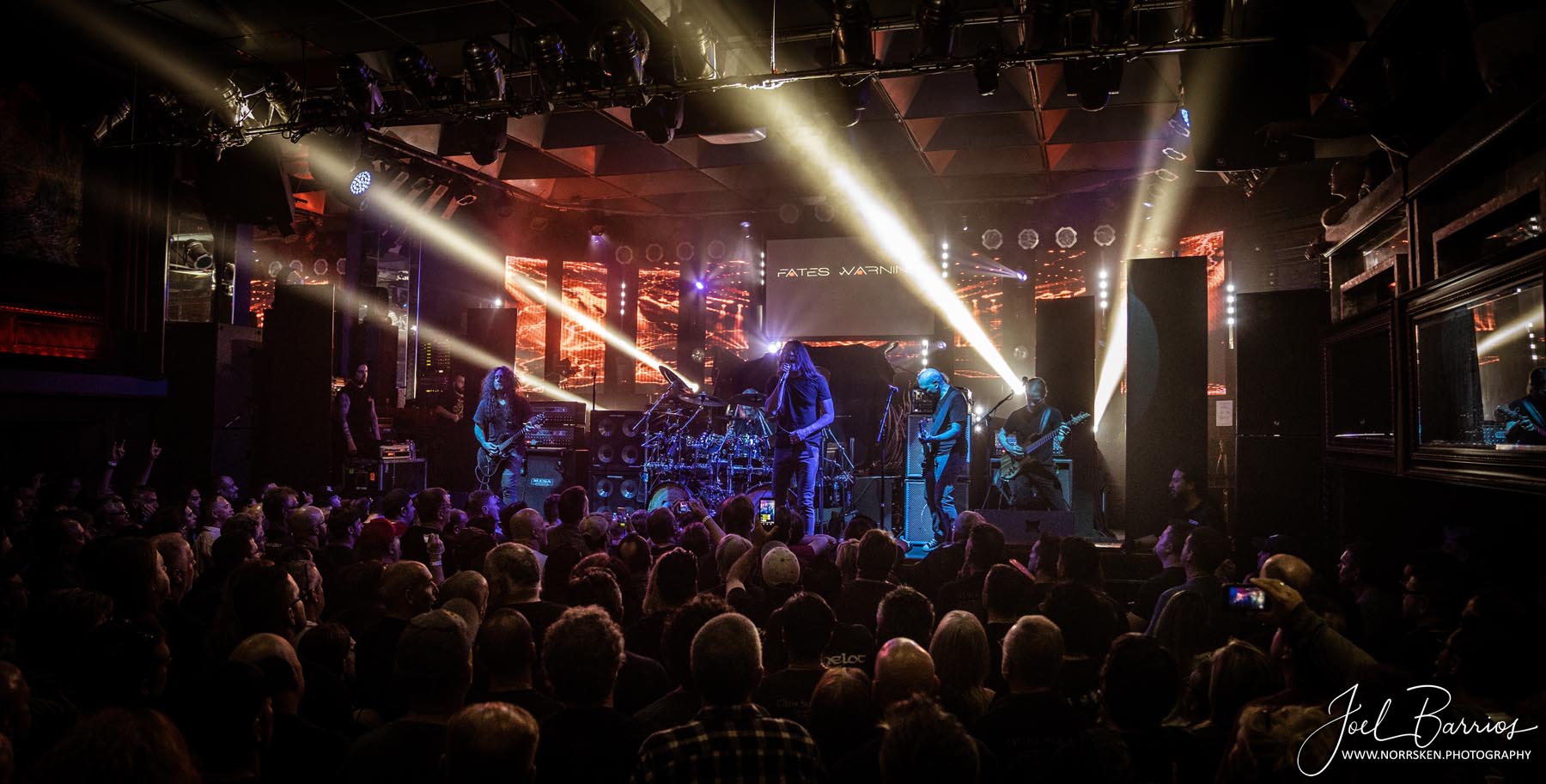 Amidst the cheerful reaction they jumped into “A Pleasant Shade of Gray, Part III”, a song that reminds you what an amazing piece of musical creativity the album of the same name is, definitely their most progressive, and arguably their finest hour. Joey Vera’s silly and humorous faces while commanding the four strings were priceless, offering a counterpart to Jim Matheos somber expression while concentrated on his guitar playing. Adler moved around and engaged with the crowd, meanwhile long-standing touring guitarist Mike Abdow showcased his fluid dexterity tackling complicated solos with surgical precision. “Seven Stars” and “Pieces of Me” gave the band a chance to display their harder edge with Jarzombek mercilessly punishing his drums, and the crowd following suit in terms of enthusiasm and fervor. Taking a trip down memory lane Fates Warning closed their bombastic set with a glorious double punch from Parallels, in the form of “The Eleventh Hour” and “Point of View”. The fans applauded and clamored for more while the band took a vow and disappeared backstage. 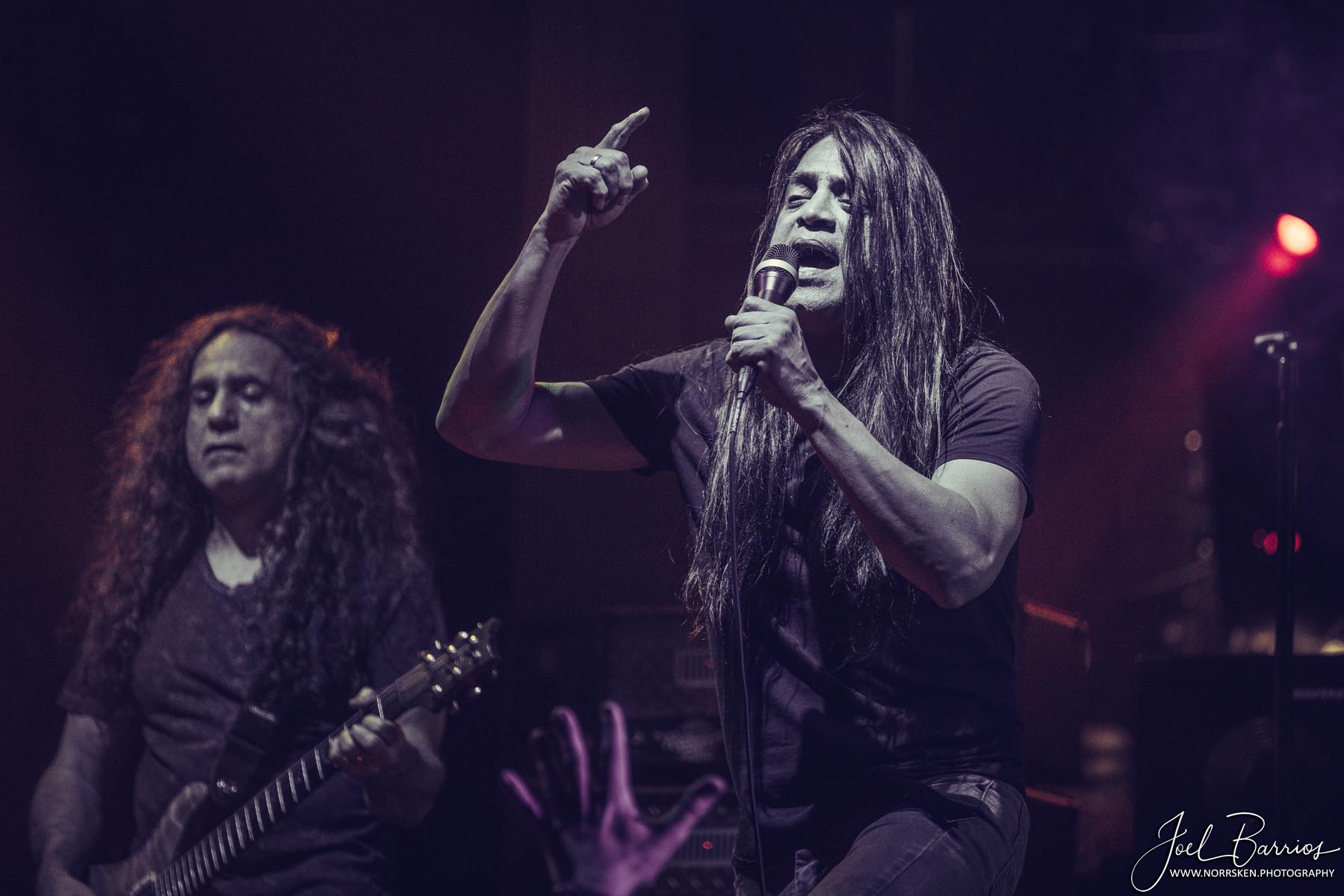 Meanwhile the stage was cleared of all Fates Warning gear, fans kept coming in, packing the general audience room even more. Close to 30 minutes later the notes of “Launder the Conscience” began playing over the PA, and the lights dimmed announcing the arrival of the night’s headliners. Almost immediately the stage came to live, and several strategically located LED screens started projecting visual content as some sort of a premonition to the musical overload which would follow. Slowly the members of Queensrÿche took their positions and the band dived headfirst into the music with “Blood of Levant”, the war-themed and energy packed single from their just released album The Verdict. The crowd simply erupted in joy.

Queensÿche have intelligently crafted a different set-list for this tour, one that steers away from many of the usual hits (And I understand some will always complaint because the band didn’t play “The Mission”, or “Screaming in Digital” or “The Lady Wore Black”), yet I believe this decision is the right one. The second track of the night was Promised Land‘s “I Am I”, followed by “MN 156” from the band’s first ever album The Warning. Accomplished musicians and masters of their craft the band was firing on all cylinders, possibly pulling the tightest performance I ever have the chance to witness them pull off, playing with ease, flow and fun, and delivering on-point renditions of the whole set list. LaTorre spoke between tracks, explaining a bit about each one, especially when newer cuts like “Man the Machine” and “Condition Hüman” made presence. Still some timeless classics were included, like the fan-favorite “Queen of the Reich” which caused the audience ecstasy to rise to in-proportionate levels, certainly matching LaTorre‘s earth-shattering and goosebumps-inducing high notes. “Silent Lucidity” is arguably the song everybody who has never heard the name of Queensrÿche is still aware of, therefore by the time the initial guitar chords began, the crowd was already singing alone and raising their glasses and lighters in the air. 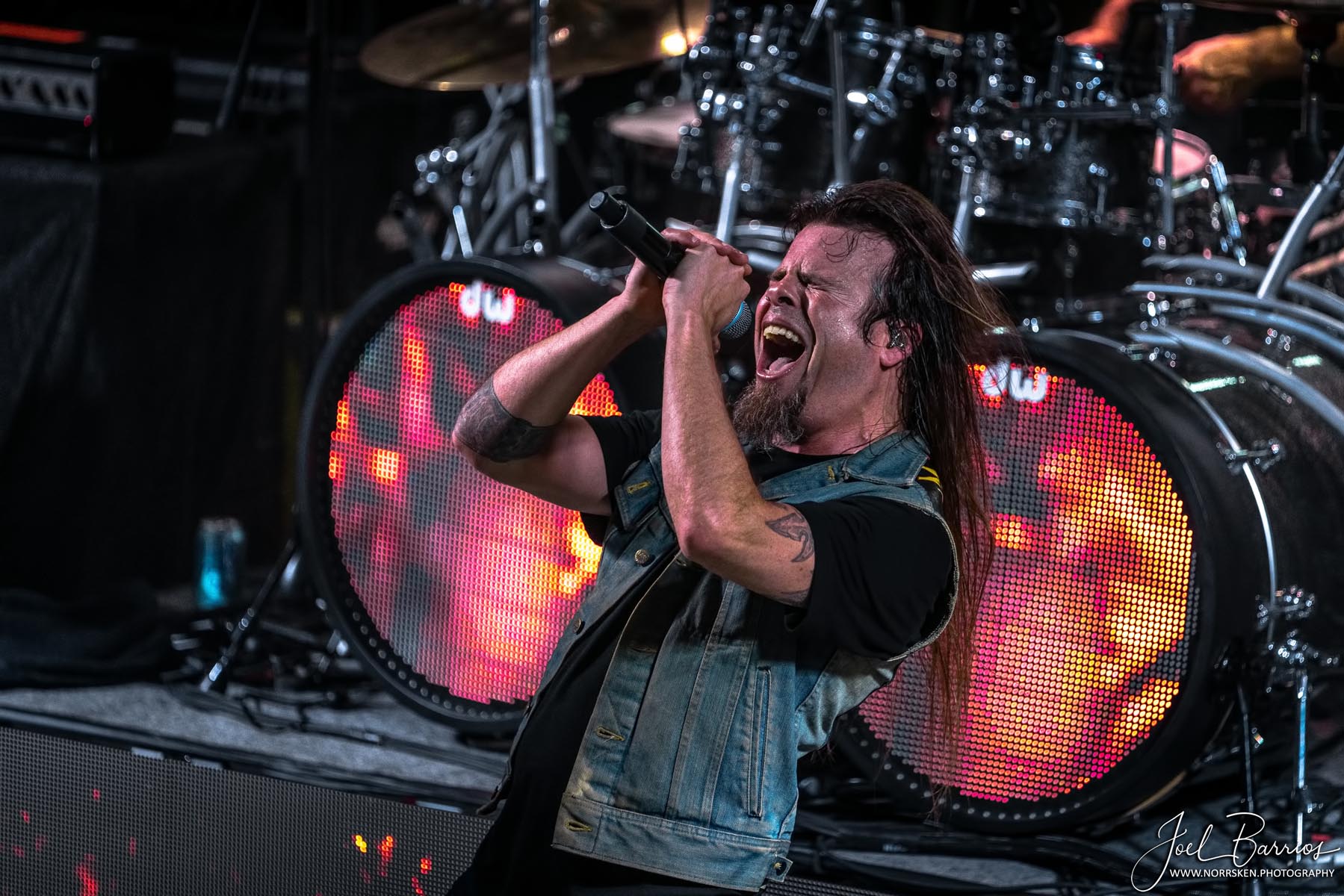 A trio of newer songs came after, the live debut of a personal favorite of mine from the previous album, the melody infused “Toxic Remedy”, followed by the beautiful closer to their eponymous album “Open Road” and the Eddie Jackson penned and classic sounding “Light-years”. They served as the perfect vessel for the band to showcase their inspired and precise chops, with guitarists Michael “Whip” Wilton and Parker Lundgren exchanging beautiful guitar solos (those written to complement the songs not to show off guitars skills) and ex-Kamelot drummer Casey Grillo – who at this time could be probably considered more than a touring drummer since he has replaced Scott Rockenfield for years now – and founder member and bassist Eddie Jackson brilliantly holding the low end of the spectrum. And of course there was Todd, the guy guiding the Queensrÿche ship in front of thousands of fans, with his impressive, imperative and ferocious vocal delivery, keeping true with the band’s legacy while adding his personal stamp on each note, this time around also paired with some air-drumming to accentuate Casey’s accurate drum fills.

I’ve seen Queensrÿche live a number of times during the past 4 years – a couple of them opening for the mighty Scorpions – and their staging dynamics keep getting better and better with each new tour. This time around not only four upright rectangular screens were placed on each side, but also Casey Grillo’s drum riser and drum-heads became LED panels, turning the visual experience into a completely immersive feast for the senses. The videos accompanying each song throughout the entire show – created by insanely talented video artist Dave Stabley and his company Big Bad Dog Productions – added a lot of vitality and  supercharged the band’s  stellar performance. 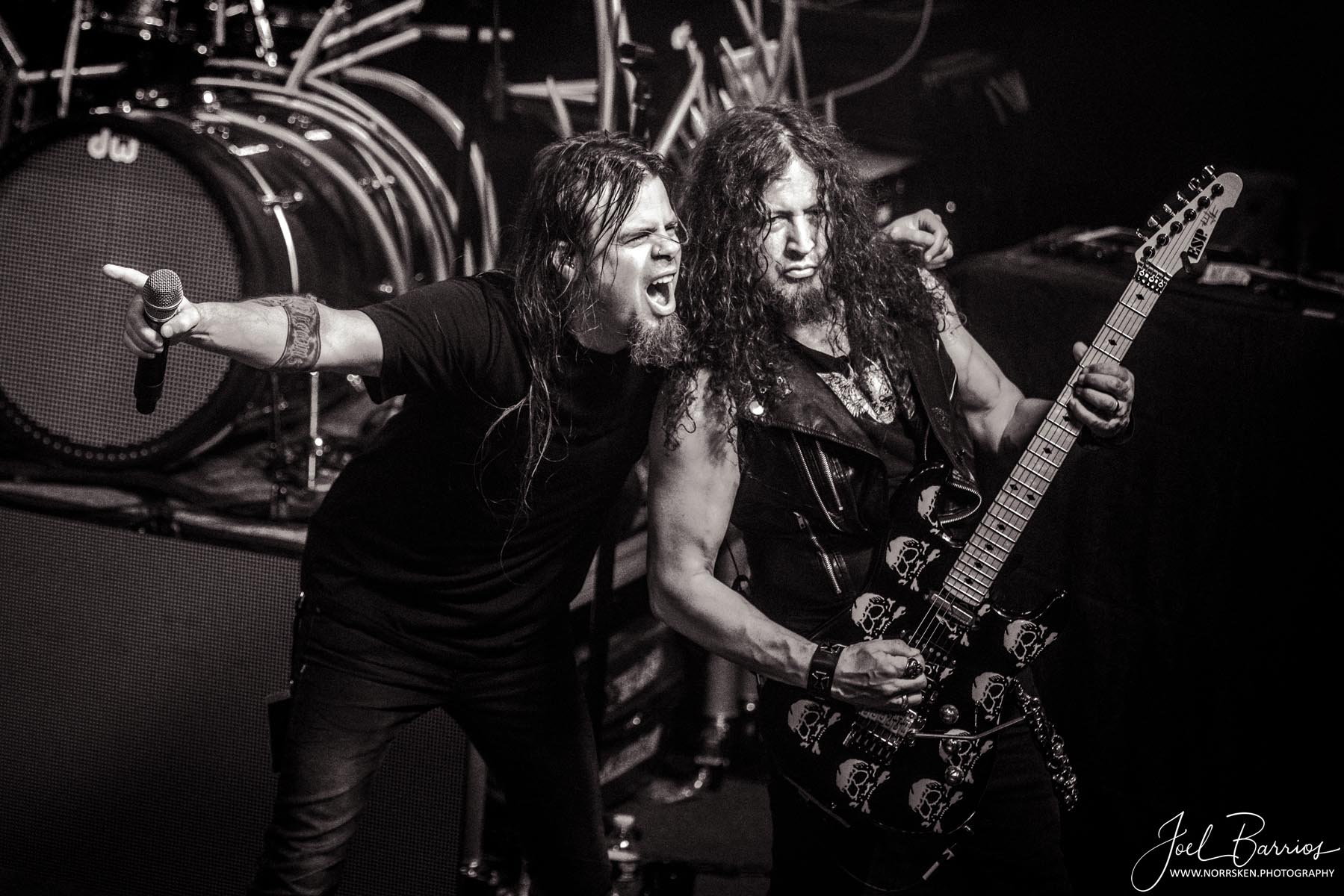 “Eyes of the Stranger” marked the end of the set-list, and every single soul in attendance sang the lyrics and followed the majestic melodies of the staple track. The band thanked the fans and went backstage, nonetheless no one moved and those in the first rows started clapping and pounding the edge of the stage with their fists, asking for an encore. And boy, did they get one. Coming back to their instruments Queensÿche delivered the ultimate night closer, a double feature straight of their multi-platinum album Empire: the sophisticated and harmony-drenched “Jet City Woman” and the anti-political and heavy “Empire”, in which LaTorre stretched out his pipes to appreciable ends for a memorable finale.

Usually we end reviews of live shows by recommending our readers to catch the band(s) tour if we enjoyed the night. This time around we will take a step further, just to let you know the full dimension of what you would miss. Stop reading right now and go and buy a ticket for this tour while you still can. And when the day of the concert arrives, drag yourself out of whatever place you might be holed up at, and don’t stop until you are in the first row. You’ll get a minimum of 3 hours of high-octane music at its purest form, played with over-the-top skills and total aplomb by two bands at the top of their game.  If you are a music lover at heart, whether familiar with these two bands catalog or not, I guarantee you this will be the one of best spent money in the year. And you can quote me on that.

From the Rooftops / One / A Pleasant Shade of Gray, Part III / Seven Stars / Firefly / Pieces of Me / The Eleventh Hour / Point of View