We all have that relative or close friend we want to see succeeding and finding their place in life. For the longest time, Queensrÿche seemed to occupy this space in the average progressive music fan’s mindset: it’s a band many wanted to see rekindling their past glories and releasing an album with the redeeming quality that say, Scenes from a Memory had for Dream Theater. Much like Fates Warning, they transitioned from the more straightforward metal of their early efforts into prog-metal. From there on, the sequence of Rage for Order, Operation:Mindcrime, Empire and the clever and forward-thinking Promised Land set a standard which seemed almost impossible to achieve. Caught in a lifelong identity crisis, the band’s sound seemed to be pushed and pulled in all directions: main-man Geoff Tate seemingly wanted a more accessible approach, whereas the other members wanted to stick to their roots. On the years to come, there was no redemption to their rollercoaster-like career, until the unthinkable happened: the band parted ways with Geoff, and thus a new chapter started to be written for these Seattleites. Over time, the change proved to be exactly what they needed – the two albums composed with the new lineup were like a breath of fresh air, and gave the fans what they expected and were missing for so long. The magic of their most revered period was recaptured, and the tension between band members seemed to completely disappear.

Now entering their seventh year with Todd La Torre handling vocal duties, Queensrÿche are ready to release one of the most intriguing albums in their entire career, entitled The Verdict. With songs that pack even more punch than the excellent first two albums with Todd, and a mix that is miles ahead of the recent efforts, the band remains determined to make up for every inch of the lost time.

The first noticeable change on The Verdict is the absence – for the first time in the band’s career – of founding member Scott Rockenfield on drums. During many dates of the Condition Hüman tour he was replaced by ex-Kamelot’s Casey Grillo. However, when the time came to record the new album, the band decided that Todd, who besides singing is also an accomplished drummer and had already written a few drum parts for the previous two albums should be the one sitting behind the drum-kit. The end result is filled with Rockenfield-isms: the double china, the alternating between the ride and the hi-hat and more of his signature parts are scattered through the album, and if one didn’t know about his absence, it would be easy to assume Scott wrote and played these parts. To this day it’s unclear whether or not he will return to the band, – and based on recent interviews with other band-members it seems there has been very little in terms of communication between both parties – nonetheless the drum department in The Verdict is as good as ever.

The album kicks off leaving very little room to breathe, with the frantic one-two punch of “Blood of the Levant” and “Man the Machine”. Two signature ‘Ryche tracks, carrying their DNA in every beat and chord. The enigmatic “Light-years” comes next, with an Arabic-tinged initial riff that resembles a bit of Dream Theater’s “Home”, some voice and synth effects bringing the listener back to the Rage for Order times, and an overall moody, AOR infused chorus.

The following cut – and a personal highlight for this reviewer – is “Inside Out”, a cut sparkled with Middle eastern influences, a thumping riff with a percussive quality, and a dynamic chorus, exuding the overall enigmatic vibe that only Queensrÿche can pull off. The tense build-up before the solo bring us down memory lane to the best moments of Empire and Promised Land. “Propaganda Fashion” picks up the pace with dissonant chords and vocal effects that seem evocative of the grunge days (Hear in the Now Frontier, anyone?) but with a far more inspired end result.

The dramatic “Dark Reveries” is the closest thing to a ballad in this release, with evocative vocal lines by Todd (no one at this point is doubtful about how a great singer he is), strong melodic verses allowing the rhythm session to shine through, an hypnotic guitar solo and lyrics that could just as well allude the band’s lineup changes: “nothing lasts forever, just revolving doors”. My favorite track follows: “Bent” sports another flawless performance by LaTorre, both on drums and vocals, a chorus which promises to be a highlight of the upcoming tour, and vertiginous mood changes throughout. 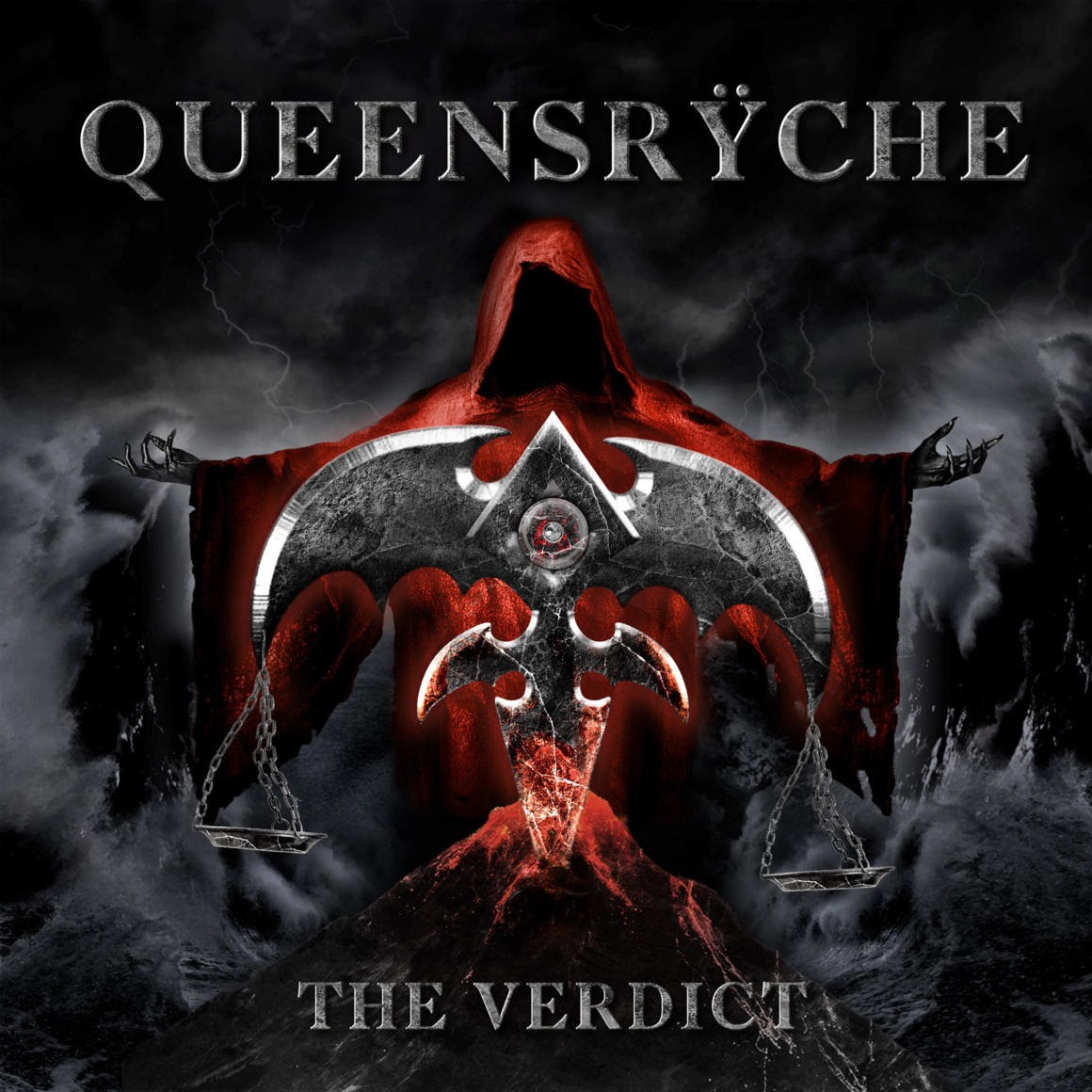 Two heavy, fast paced and muscular numbers keep the interest at its peak, “Inner Unrest” and “Launder the Conscience”, until the lingering and atmospheric “Portrait” closes the proceedings with layered vocals, tasteful guitar work, and a strong sense of accomplishment – the band sounds invigorated and seems to be on an upward trend. Old and new Queensrÿche fans will finish their first listen of The Verdict with grinning look on their faces and wishing for more songs to sink their teeth into – it’s an album that finds strength in its consistency, and additional full spins of this release will not leave the listeners exhausted towards the end.

Compared to the recent efforts of the Todd’s era (or the resurgence era, the return of the true Queensrÿche ), The Verdict has a more organic flow than Queensrÿche and Condition Hüman. It’s perhaps darker and heavier, and it feels like a better crafted collection of songs, without diminishing their predecessors. The music walks the fine line between their traditional 80s eclectic/rock style and a more modernized, groovy prog-metal component, while managing to be at the same time courageous and smooth. Musicianship is top shelf, with Jackson‘s bass tone providing the foundation low end to the engaging guitar melodies constantly coming off the minds of Wilton and Lundgren.

Now reduced to a four-piece, there’s a stronger sense of what the band’s identity should be, in contrast with lackluster efforts of past decades. With clenched fists, playing and singing like they still have something to prove, Queensrÿche approaches their 40th anniversary in extraordinary shape, firing on all cylinders. This is a clear contender to the best album of the year despite the fact we are just in mind February. Highest recommendation.

In this day and age it should be old news that Queensrÿche have found their way again after Geoff Tate left, but seven years after his departure, it’s still surprising how the band seems to improve with each release. “The Verdict” continues the positive trend, and propels their sound even further. An inspired album, bound to please the most demanding of fans