It was Saturday night in Fort Lauderdale, and the holidays were rapidly approaching with all of their cheerful malice. To escape the vibrant lights lining the street and endless onslaught of carols, I was on my way to decompress with old-school death metal and Swedish black metal. With such infamous names filling out the bill, and a show placed in the heart of the weekend, the venue was full before the first band fit the stage, excitement rippling through a crowd abuzz with anticipation.

Death metal veterans Incantation took the stage first, instantly transporting the audience back to the 90s with the dark classic “Entrantment of Evil” from their 1992 debut album “Onward to Golgotha.” The opening notes were enough to ignite the mosh pit, a small spark of excitement growing into a full flame of frenzied motion. An animated crowd carried a reflection of the enthusiasm with which vocalist, guitarist, and founding member John McEntee delivered a short and brutal mix from their lengthy discography. This expert delivery was aided by the master shredder Sonny Lombardozzi’s work on the guitar, digging a deeper trench into the floor of Fort Lauderdale’s Revolution Live with every riff. 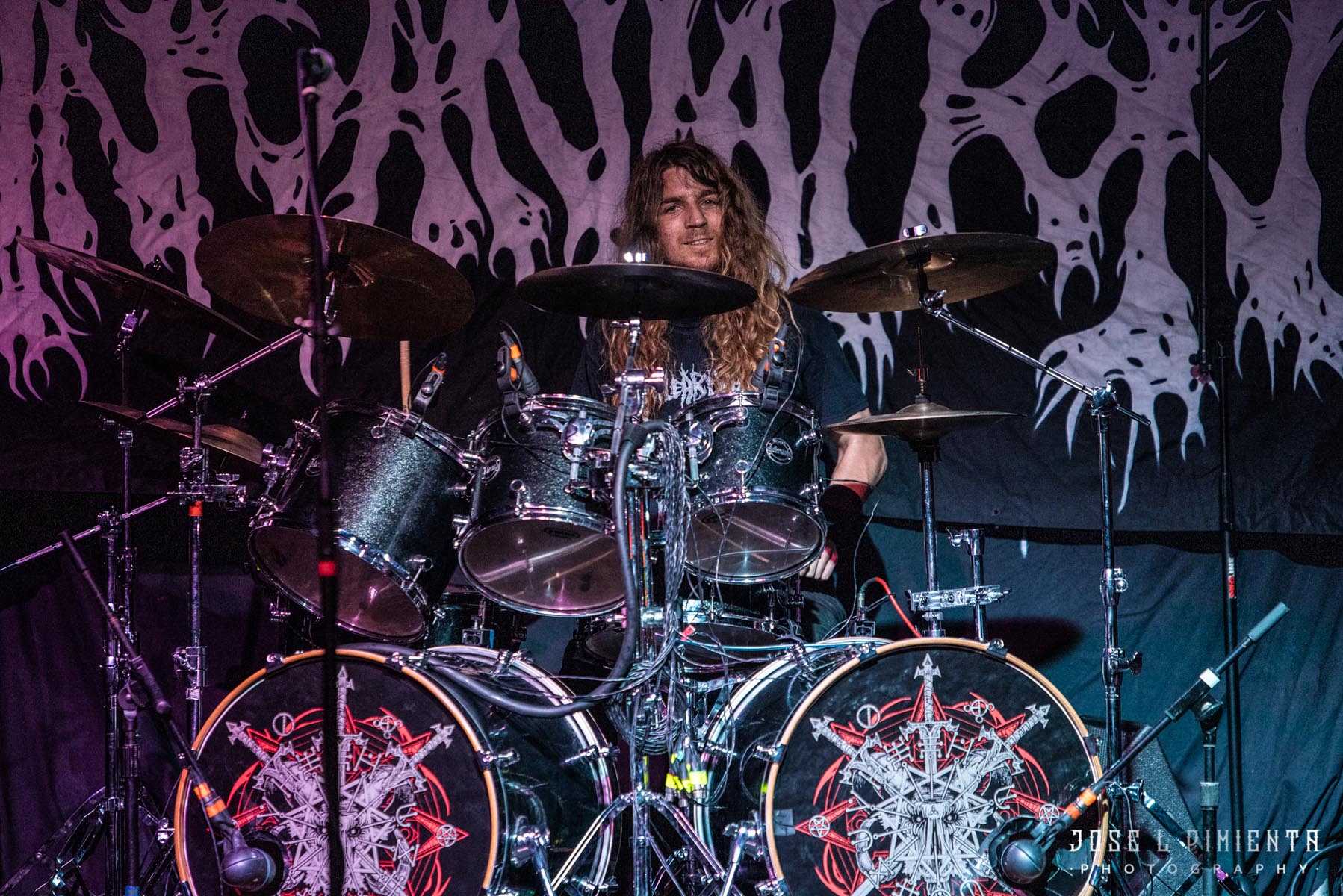 The long-famous act was fearless in pulling from their discography far and wide, a bold move for an opening act with such a fabled history. Rather than sticking to their greatest hit, they selected tracks from their debut through their most recent 2019 release, demonstrating a careful evolution of their sound across the decades while also showing a persistent quality in live performances that can inspire and inflame in the same breath. The set closed with “Impending Diabolical Conquest,” a closing chapter to a set-list that felt like a walk through death metal’s star-studded history. Though this may have been their last show of the year, I know that I’m not the only one eagerly awaiting their set which will soon be performed onboard the indomitable 70,000 Tons of Metal cruise. 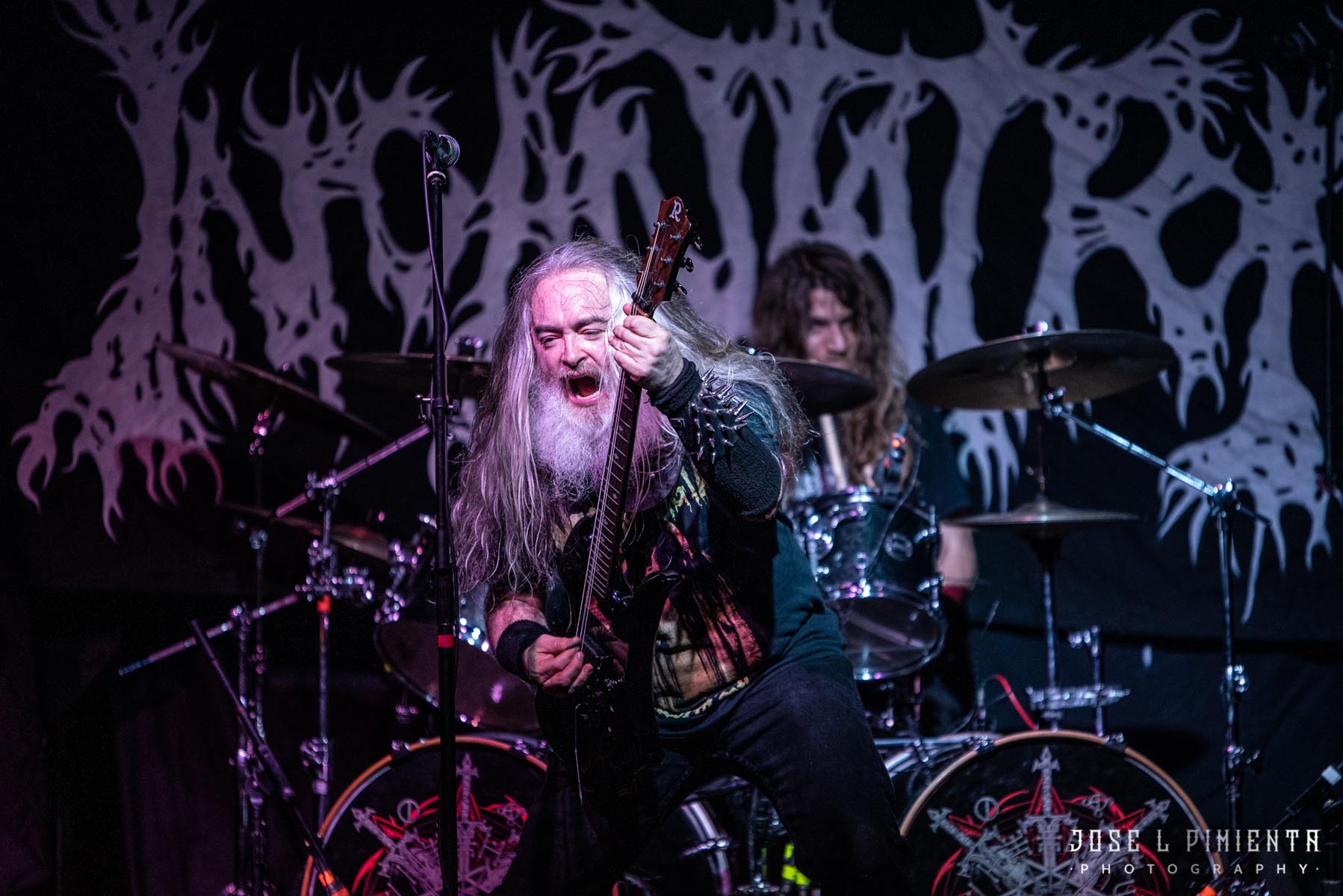 Up next was Swedish black metal outfit Watain, whose very presence in the venue caused the smell of death to permeate through the air. The stage was prepared in dimmed lights, gruesome scenography completed as the heads of animals were impaled on their inverted crosses and tridents. The effect was so severe that I can still smell the putrefaction as I write this article, but the audience was alight in a mixture of horror and delight. It was to this reception that the band began to take the stage, with vocalist Erik Danielsoon carrying with him a bundle of sage that burned throughout their whole set. With a scent of sage intertwined with the euphoric stench of death and sweat, the atmosphere in the venue grew even more infernal and chaotic. 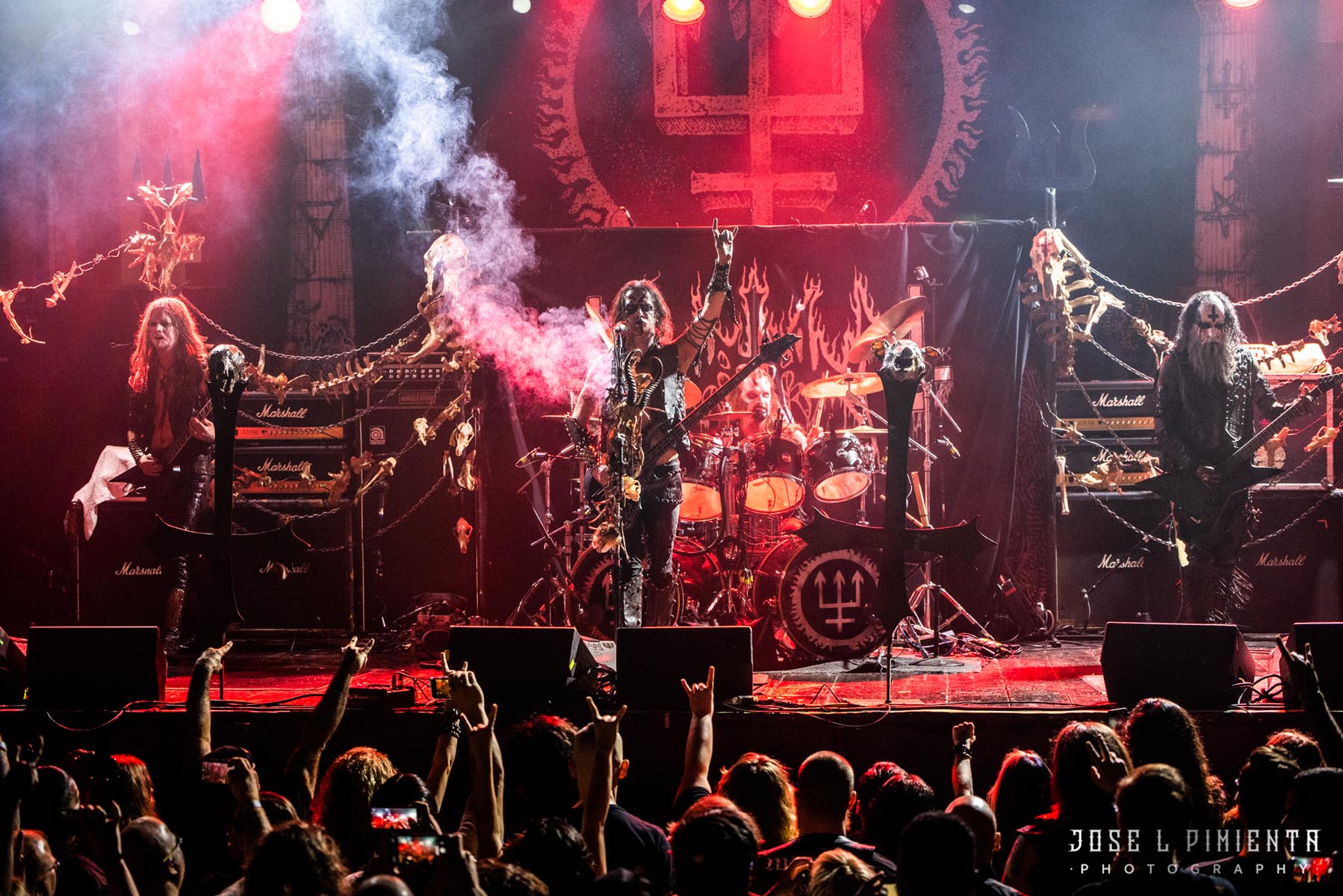 The stage set in a manner only fitting for their music, they began with the title track of their 2007 masterpiece “Sworn to the Dark,” bringing with them a wave of energy that further entranced an already enthralled audience. Each note caused the carefully planned ritual to escalate in intensity, drawing every soul in closer and deeper to their soul-crushing wails of despair. Howling anguish from distorted guitars brought a chill to the air, wrapping the Floridians of a more mild climate in the unforgiving chills of a Swedish winter, accented by Danielsoon’s tormented wails. They finished their act of dark theater by going back to their first full-length album “Rabid Death’s Curse” with track “On Horns Impaled.” There could not have been a more fitting closer considering the terror and macabre satisfaction which they had wrought on a crowd that seemed to beg for more. 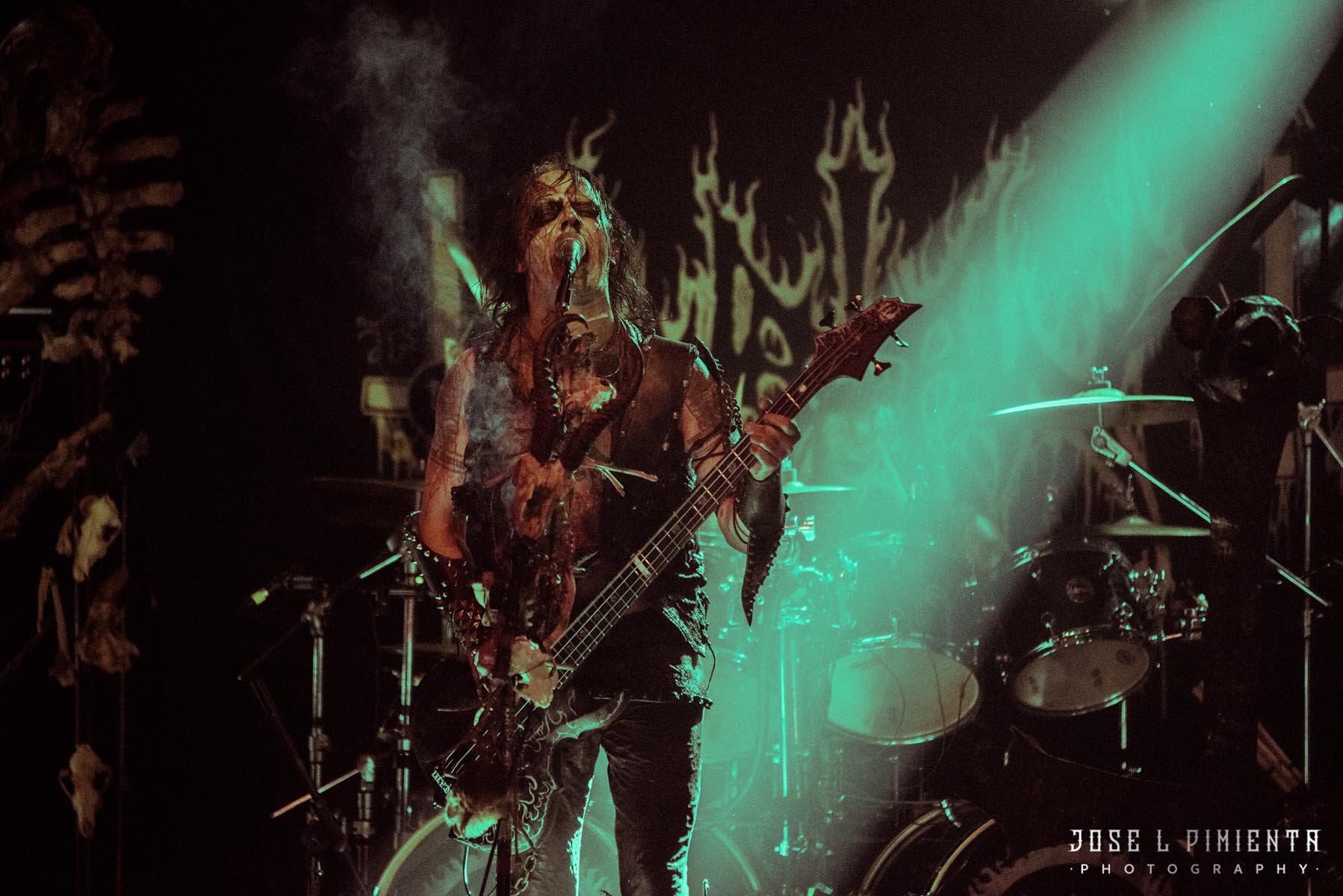 Last, but certainly not least, came Floridian death metal royalty. None other than Morbid Angel was set to headline, a band whom I have listened to for years. I still remember the moment at which I discovered their music, absolutely blown away after a high school friend lent me his tape of “Altars of Madness.” The speed and precision of the wailing guitar was absolutely unparalleled, and earned them an instant, lifelong fan.

Opening their set with a more modern flavor, Morbid Angel played their first four tracks directly from their latest studio album “Kingdoms Disdained,” which served as fuel for an already insatiable mosh pit. The set walked back in time, gradually working towards their 1990s tracks, during which guitar master and original band member Trey Azagoth gave a lecture of riffing and rhythm that was impossible to look away from. His virtuosity went unchallenged as he changed guitars throughout the night, treating us to solo after solo in his masterful hands. 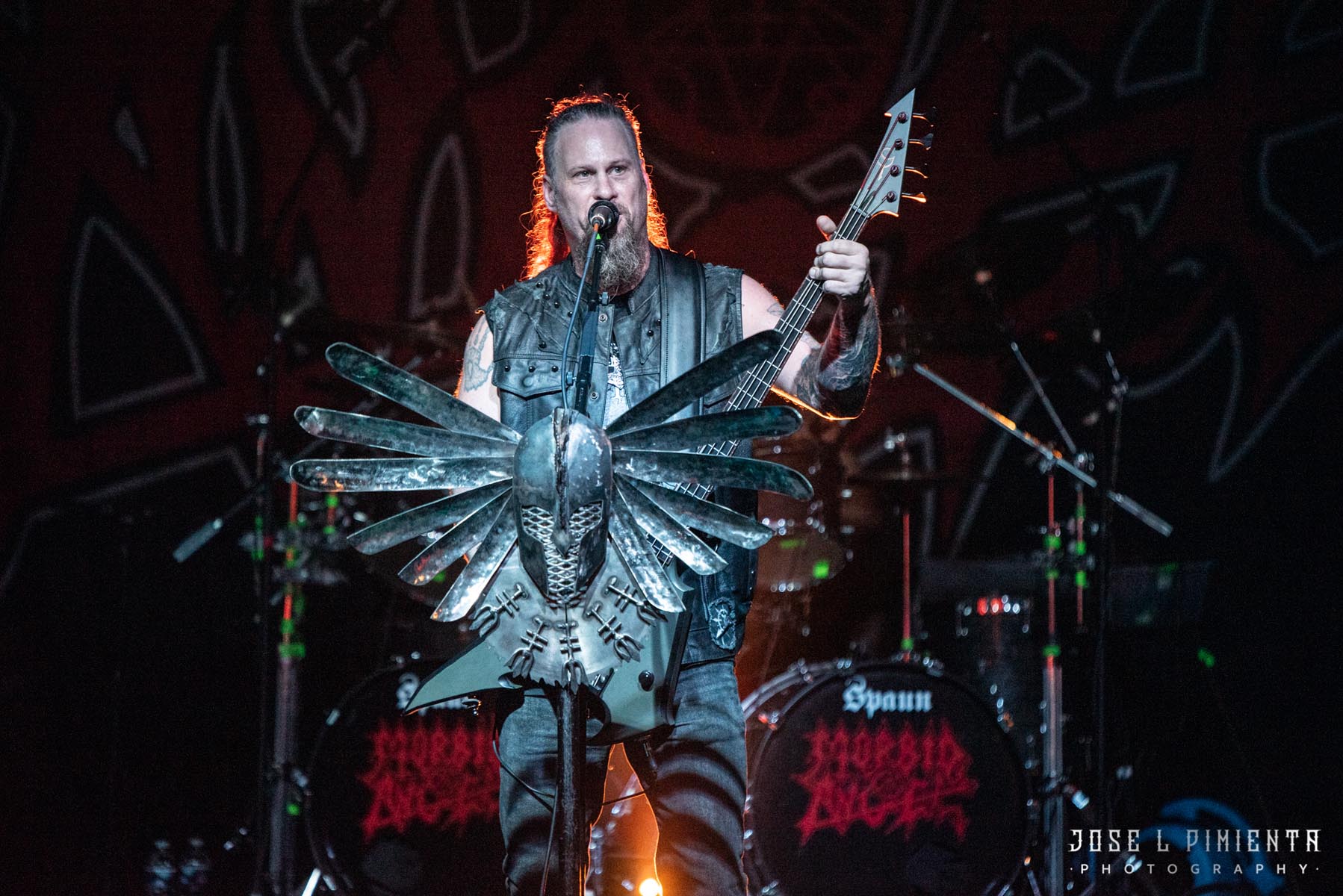 Aside from Azagoth, the rest of Morbid Angel’s current lineup is made of rather new additions, drummer Scott Fuller and guitarist Dan Vadim Von both having joined in 2017. With almost three years under their belts, they were unflinching in their blasphemous delivery of Morbid Angel’s unholiness, their personalities shining through in matching a pace that had been set by their predecessors. Natural movement and flawless cohesion on the stage gave the illusion that they had been born to play for Morbid Angel, delivering the anthems of death metal that so many hold dear to their hearts. As the dark ceremony finally drew to a close, they finished the night with an electric rendition of “Summoning Redemption,” “I,” and “Nothing is Not.” 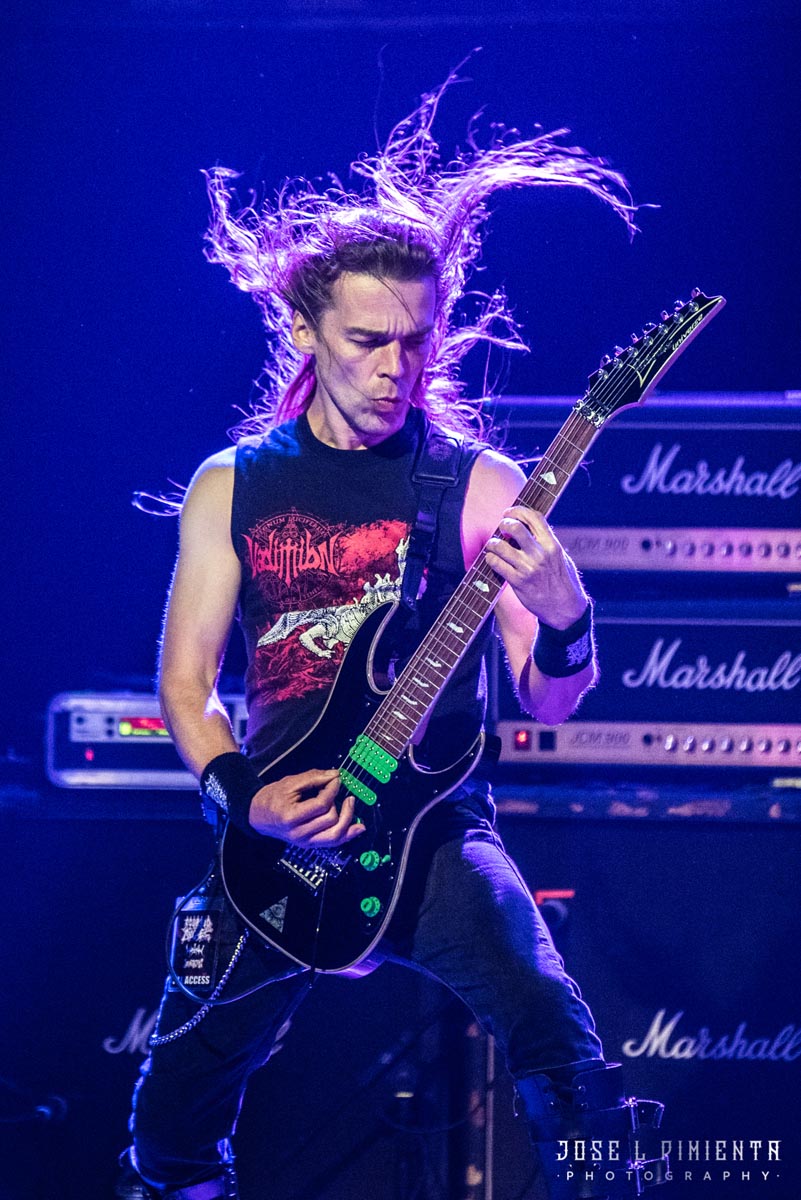 This was the last show on the 2019 USA Sickness Tour, but none of the bands showed a moment of weariness after long nights spent shredding. They brought their all to the stage, never letting up for a moment even as the audience drove themselves into exhaustion with ceaseless enthusiasm for some of metal’s most acclaimed. A venue overflowing with love for extreme music in the midst of the holiday season gives me faith that metal is still alive and kicking, and that fans certainly have much to look forward to onboard the rapidly approaching 70,000 Tons of Metal Cruise.

Piles of Little Arms / D.E.A.D. / Garden of Disdain / Architect and Iconoclast / Unholy Blasphemies / Day of Suffering / Blasphemy / Abominations / Prayer of Hatred / Rapture / Summoning Redemption / I / Nothing Is Not