After a prolonged absence, guitar-based rock music is slowly creeping its way back into the mainstream. International groups such as Greta Van Fleet, The Struts and Rival Sons are selling out theatres and clubs all over the world, paving the way for more young bands to set themselves up for interest going into the 2020’s. One band that is sure to garner recognition down the track are Creature Fear, a Melbourne-based five-piece who have managed to do the unthinkable – gain traction on Australian youth radio while making music heavily inspired by the rock and roll of the 60’s and 70’s. Throughout their songs, there’s also throwbacks to the new wave sound of the 70’s and 80’s, as well as the rock revival of the early 2000’s (The Strokes, The White Stripes).

I first discovered Creature Fear in late 2017 as support for another act, and they completely blew me away with their catchy riffs and choruses, as well as their all-round playful attitude to being onstage. Tonight they are launching their fourth single, “Baby Love Me” with two other uniquely retro acts at renowned Melbourne nightclub Yah-Yah’s. I hadn’t seen them since, and after eighteen months, I was keen to see how far they had progressed. Well, not only have they reaffirmed their status in my mind as the best band on the Melbourne live music scene, but they’ve also introduced me to two other up and coming artists with their own styles.

Eastbound Buzz are the first band to take the stage, bringing with them a combo of songs influenced by Australian punk and American new wave. Lead singer and guitarist Jarryn Phegan is decked out as a tradesman in a blue boiler suit, and matches this with his calm, mumbly voice reminiscent of Tom Petty and Bruce Springsteen. Set openers “Secondhand” and “Big Smoke” have a seaside vibe to them, with well-written melodies and a double-guitar blend, with Phegan taking open arpeggios and Andy Chalmers strumming the chords. As the small keyboard next to Phegan is introduced with “Red Rover” and it becomes used more and more throughout the set, the band settle into their environment and I feel like I’m transported to CBCB’s in New York, circa 1981. By the time they reach their final song, “Lost In The Shuffle”, punters are getting won over and starting to dance, but sadly their time has come to an end. Eastbund Buzz are very much a band in development and I’m interested to see how they build up their stage presence for future gigs. 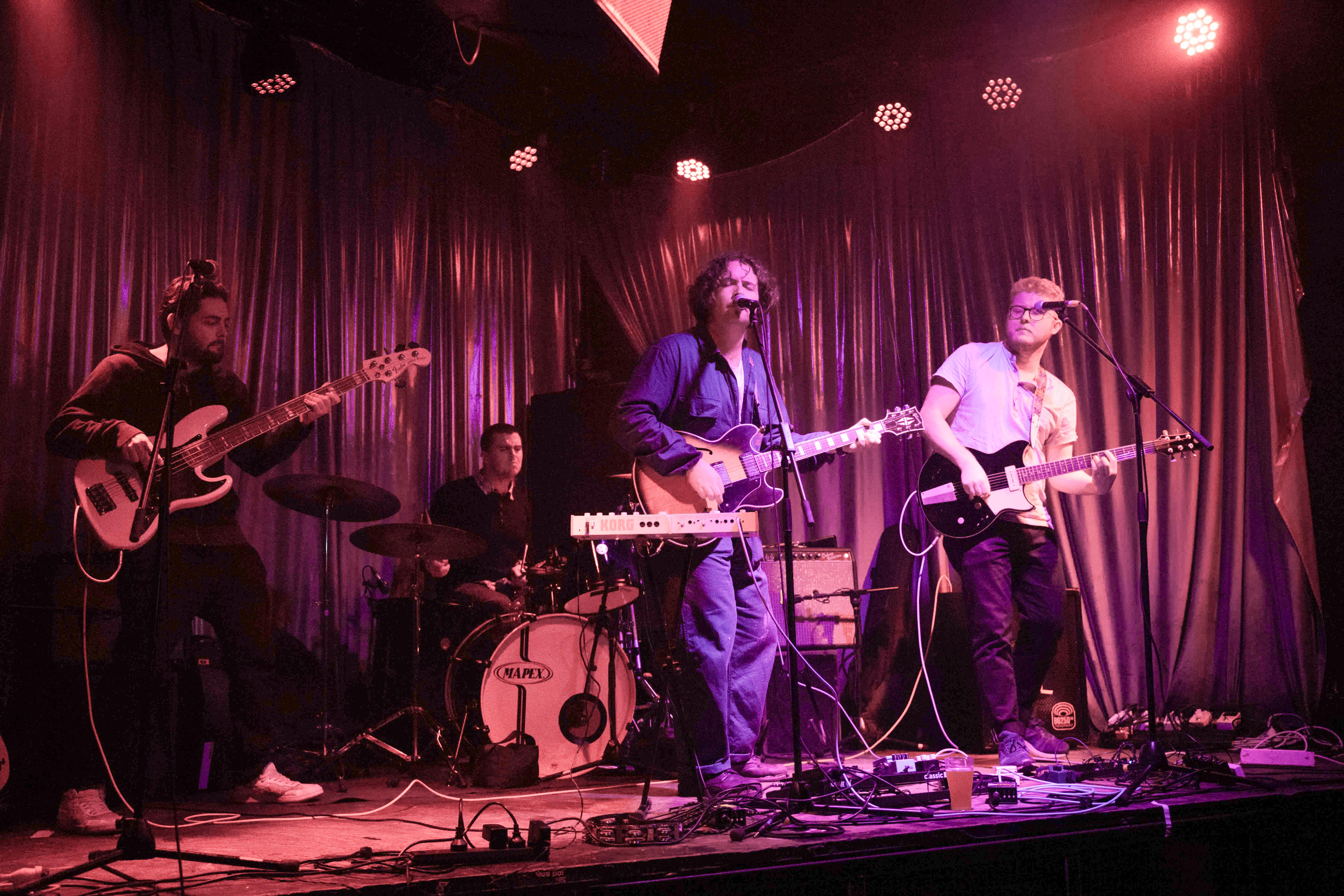 You could easily be forgiven for think Wesley Fuller has just walked out of a time capsule from 1968. He looks like he’s right out of that era with an afro, turtleneck, Bell Bottoms and a Flying V guitar, while all his band-mates have Beatlesque haircuts & era-coordinated outfits to go along with him. A group of people so committed to making such a statement can either be a triumph or a tragedy. Fortunately, it’s the former. Fuller is a great songwriter and has tapped into the Rock & roll of the late 60’s with near-precision. Opening number “Someone To Walk Around With” immediately gets heads turning with its Bo Diddley beat, dirty guitar, four-part harmonies and very catchy chorus. Other highlights of the set include “Biggest Fan”, which features some unique key changes, the T-Rex fused “Runaway Renee”, and the genre blending “Inner City Dreams”, which combines the vocal melodies and harmonies of The Kinks with the synth-pop tones of XTC. Having recently completed a European tour and played a few shows supporting Aussie rock legends Hoodoo Gurus, Wesley Fuller is well on his way to becoming a superstar in the retro rock scene. 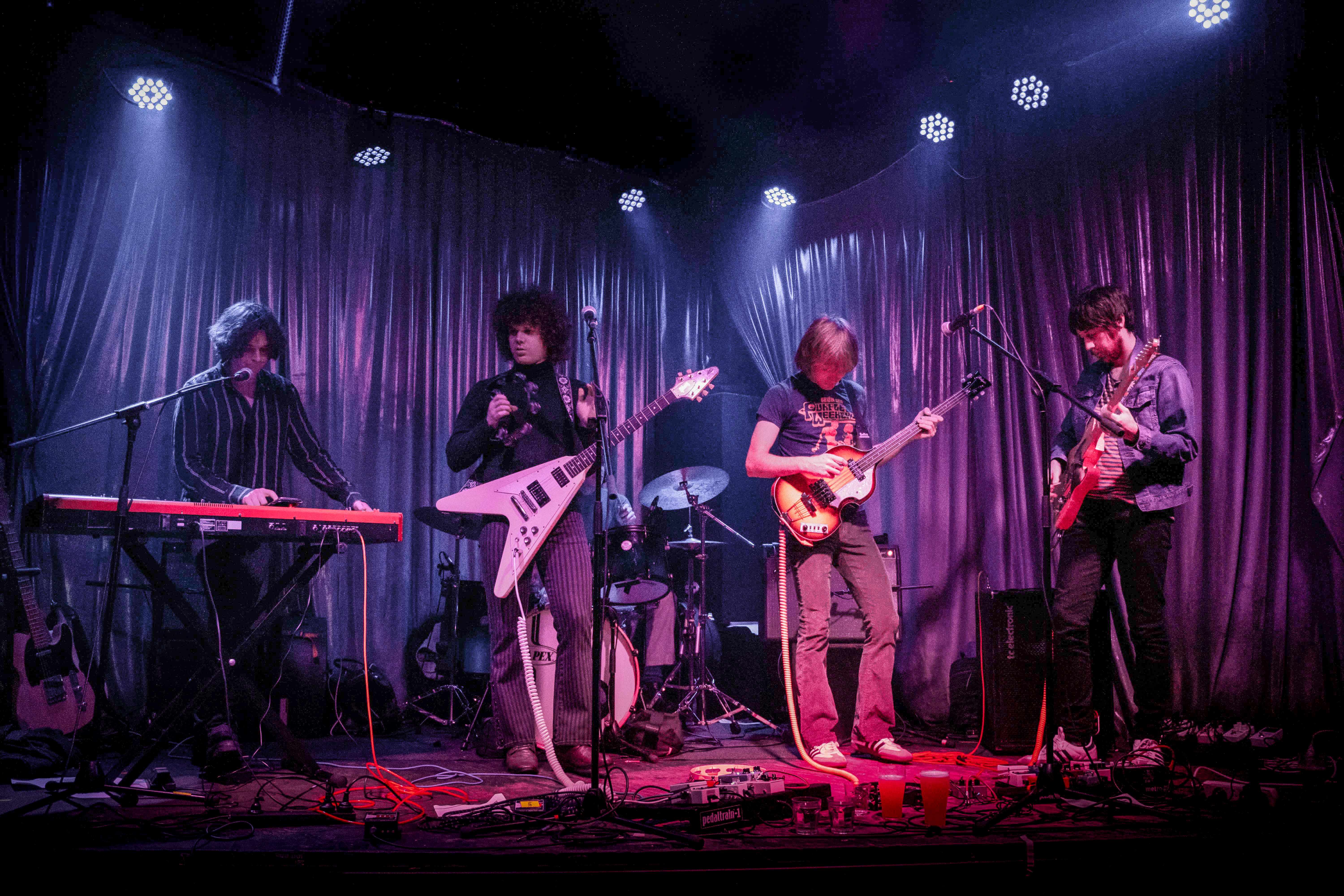 Finally, Creature Fear take the stage, and their entire ethos is summed up in guitarist Cameron Graham’s opening words to the crowd – “We’re Creature Fear, and we hope you have fun”. Immediately a surf-rock drum riff begins, the bass starts to rumble, and part by part, the band’s debut single “Please Me” begins to take shape. This song was the perfect choice to not only open the show, but also to unleash Creature Fear onto the world, as it has all the hallmarks of their other songs rolled into one – Lead vocals are shared by Graham and front-woman Jacqui Lumsden, and they bounce off each other with calls and responses, counterpoint lines, and octave harmonies for everyone to sing along to.

One of my favorite things about Creature Fear is that all five members have unique personalities that demand attention. A dead ringer for Al Jardine, Graham‘s style is fully fleshed out, with a retro striped shirt, high-slung guitar, and a manic stage presence reminiscent of young Jack White . Every movement is filled with expression, and his voice can go from deep and smooth one minute to loud and raging the next. Similarly, Lumsden jumps between sweet and sour, going for a subdued soprano in songs such as “Mars”, then later embracing quirky mood-swings in “Dear Joe”. Drummer Larni Pearce is all about serving the song – even though she seems like the kind of girl who could play a super fast jazz fill if she wanted, tonight she channels Ringo Starr and Patrick Carney with her strong rock & roll rhythms. Guitarist Jason Mercieca is the newest member of the group, but he is their secret weapon – taking most of the guitar solos and approaching them with an intense bluesy twang, I found myself drawn to him several times throughout the night, curious of what note might come next. Lastly there’s Jack Stephens, who does a fine job filling out the sound on bass, and even seemed to have his own little group of fans by his side of the stage, cheering on his every move. 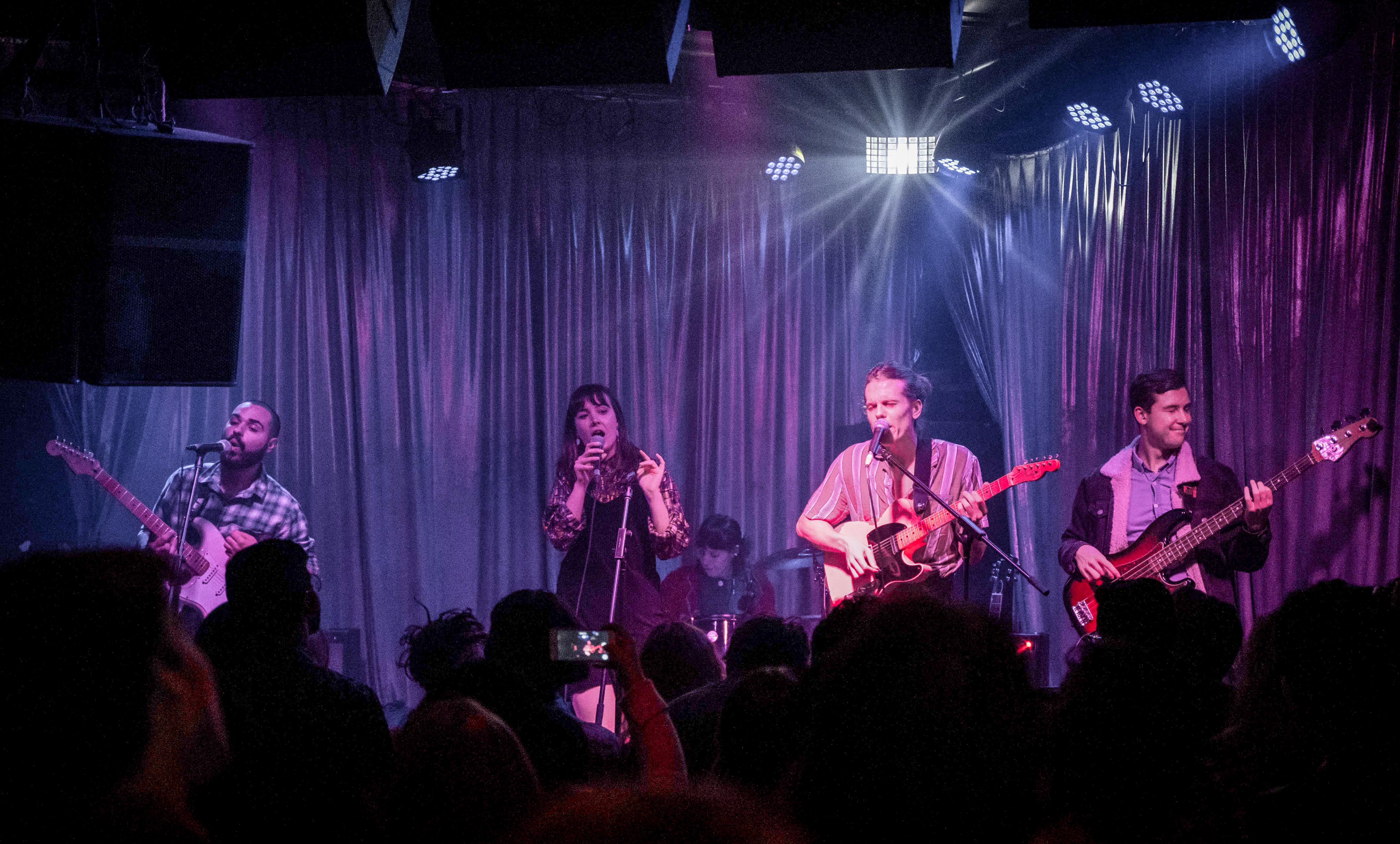 Most of Creature Fear‘s songs are short and concise, so they were able to fit a whole heap of material into their one-hour set, even throwing in a few surprises, such as the Country-inspired ballad “Wild”, featuring Liam and Dylan from Folk-Pop outfit Parkville, and a cover of The Cranberries’ “Dreams”, with Jaqui’s sister Kate taking the harmony vocals. The last quarter of the show featured some of my favorite songs – “Clean Up Man”, which really should have been stretched out beyond its studio time of two minutes thirty seconds, “Dear Joe”, a country hoedown with a middle 8 reminiscent of “Mr Kite” and “I Want You (She’s So Heavy)”, and the growler “Barely Alive”. The show closed with the double-shot of new single “Baby Love Me” and an encore of “Beautiful Girl”, another acoustic ballad featuring the Parkville boys.

Creature Fear is everything I could want from a modern rock & roll band – they’re co-ed, quirky, incredibly diverse in both personality and musicality, and at the core of it all, they just look like they’re having the time of their lives. Despite their onstage manic tendencies and lyrics that border on psychopathic, every member of this band is friendly and approachable, and together they look like a modern-day Breakfast Club – a group that shouldn’t work together, but somehow does. Props to both Easbound Buzz and Wesley Fuller for putting on great sets and reminding me of how many hidden gems there are in the Melbourne music scene, but I cannot endorse Creature Fear enough, and I eagerly await their first full release, be it an EP or Album.