There’s a time and place for fiery battle hymns, and there’s a time and place for the long march to war. Metal often seems to focus on the former, the fury and the glory that coalesce on the road to certain victory or death, electricity and thunder crackling across a ravaged battleground. Fewer bands seek to fill the niche of the interim before the clash, a slower grit that brings a taste of doom to the long-heralded heavy metal, drawing out NWOBHM riffs across an inspired outpouring of fulfillment. Infusing old-school heavy metal with stoner subtleties and doom-derived atmospherics, American metal band Wolftooth returns with their sophomore album “Valhalla.” Overflowing with tales of Nordic might and an unbridled sense of adventure-seeking, the excitement of “Valhalla” varies from the occasional arena-rocker to stoner riffs superimposed on the unmistakable flavor of blues.

This unique sound is as heavy as it is accessible, reminiscent of the golden era of early-80’s heavy metal with exciting guitar-laden hooks and a reliable percussion setting the tone. Wolftooth aren’t the first band to seek such a combination, following in the shadow of American metal band The Sword and their compatriots Red Fang. The sense of almost dreamy adventure is what sets Wolftooth apart, their tones somewhat more monotonous across the pages of “Valhalla,” sinking deep into the predictable rhythms of doom without losing the fresh riffs of heavy metal. It’s in the hooks of songs such as “Crying of the Wolves” that Wolftooth demands attention with a command that pure stoner doom could never muster, guitarists Chris Sullivan and Jeff Cole taking equal command over strings. Two guitars in constant motion across spotlight-soaking solos and deep chords give Wolftooth a consistent depth across “Valhalla,” unwavering as Sullivan’s voice cuts through the mix.

Driving the sound of Wolftooth to even greater fullness is Terry McDaniel’s bass, not neglected as mere support when he takes a key role in the ascension of standout track “Molon Labe.” Including a number of bass solos, the procession of darkness that accents the aggression of “Valhalla” comes at McDaniel’s steady hands. Though the bass is one of the more repetitive players in the mix, it compliments the dual assault of guitars with focused union, building out the atmosphere of the album rather than setting the tone. All four musicians of Wolftooth come to the table with decades of experience in metal, but Sullivan and Cole have had the benefit of first crossing paths in the early 90s as they both played in the now-split death metal band Darknes. Together they craft riffs which define Wolftooth as more than just a project of nostalgia and self-indulgence, but instead as an avenue for creative foresight and talent to blossom. A mix favors both instrumentalists equally in the high-octane solos found in the explosive “Scylla & Charybdis,” one of the most dynamic tracks on the album, and one which sees the strongest feats of production. A vocal balance that is somewhat muted is perhaps the weakest link in a final sound which is clean and distinct, never suffocating the guitars which give Wolftooth its backbone. 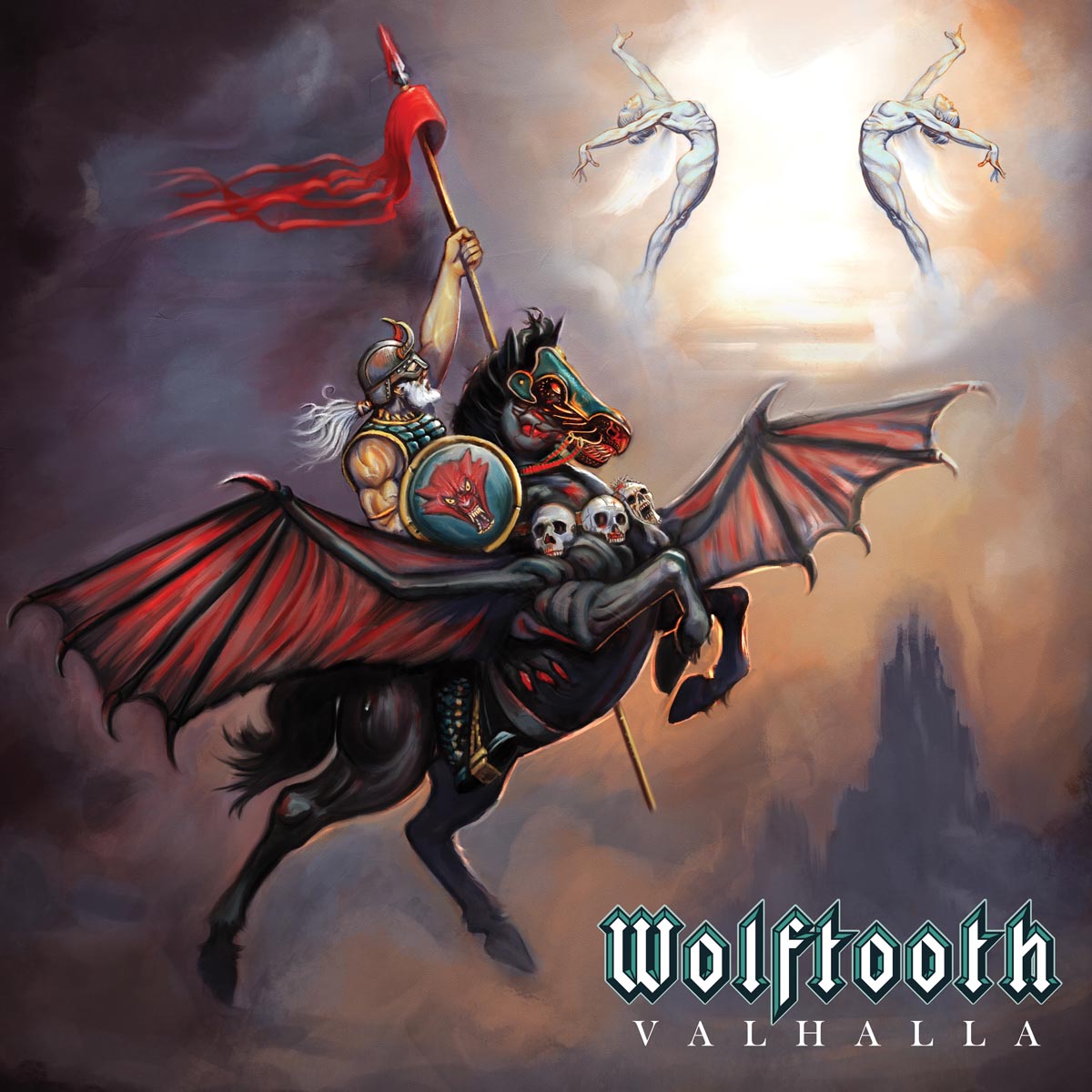 To give Wolftooth yet another dimension is the fact that “Valhalla” utilizes not just two guitars, but two vocalists. Both Sullivan and drummer Johnny Harod work in tandem to tell tales of valkyries and fire-breathing heroes, successfully joining in a mighty display of power that leads the chorus of “Firebreather” to even greater heights. Switching between the use of Sullivan’s voice alone and his joining arms with Harod creates even greater distinction across doom rhythms which occasionally lull the listener to complacency. One such track that falls in this more tired slog of stoner doom is penultimate track “The Coven,” but Wolftooth doesn’t stand to falter for more than a second. Closing track “Juneau” is perhaps the most volatile on the album, mesmerizing in its homage to heavy metal titans without losing a distinct Midwestern bite that found its way into blues-riddled solos throughout “Valhalla.”

Never too upbeat in its smoke and shadows, “Valhalla” is a perfectly balanced concoction of early-80’s nostalgia and the grit of modern stoner doom. Insatiable rhythm and charismatic union between musicians give Wolftooth the dynamic of a well-oiled machine, rolling across riffs in an album that one can’t quite bring themselves to pause. The experience Wolftooth’s members bring with them is clear, for even in tracks that seem to dip into tedium fight for their footing across bombastic closers, overpowering hooks, and charged choruses. For all the metal-loving warriors who’re in it for the long haul, “Valhalla” is a must-have in anticipation of the summer’s coming haze.

Wrapped within a warm blanket of Midwestern stoner doom is the explosive power of Wolftooth’s riffs, taking after early-80’s heavy metal without ever succumbing to the brightness of solo-centric stardom. Balanced, sensible, and absolutely magnetic in its steady drive of doom, “Valhalla” finds its identity by striking the middle ground among a number of unique styles.