Painting the sky with vibrant colors and an air of wonder, symphonic-progressive metal band Wilderun returns with their latest gem, “Veil of Imagination.” A roaring return from their long slumber, Wilderun continues to evade the classification of any one genre, delivering instead a fully engaging masterpiece that rivals a complete cinematic experience. Listening to “Veil of Imagination” is not a task to be taken lightly, with eight tracks delivering almost seventy minutes of tantalizing twists and turns that command the listener’s attention from start to finish. This is an opus that is best devoured whole, for once the first notes are set free, tearing oneself away from this musical journey unlike any other proves to be all but impossible.

Nearly four years have passed since the release of “Sleep at the Edge of the Earth,” an album that gained acclaim for its tasteful and creative blend of symphonic and folk elements against a progressive song structure. The tentative exploration into atmospheric work in their sophomore album set the stage for Wilderun’s leap into the purely grandiose as it is seen on the larger-than-life tracks within the ambitious confines of “Veil of Imagination.” This latest work is a far cry from the folk-fueled, rollicking melodies that comprised their debut “Olden Tales & Deathly Trails,” with pirates discarded in favor of the enchanting and ethereal. Their earlier discography does not lack sophistication or artistic vision, but neither album comes close to embodying the creative soul in the same way that “Veil of Imagination” weaves its transcendent and boundless adventure.

“Veil of Imagination” is crafted with an immense number of moving parts, with dedicated musicians ensuring that each component shines with utmost brilliance against each other. Perhaps the most stunning component, and the one that is cause for most excitement, is the dynamic orchestration that comprises the body of the album. Responsible for orchestrations on the album are Dan Muller and Wayne Ingram, both of whom have the considerable experience of Wilderun’s prior albums under their belts. Calculated symphonic grace allows “Veil of Imagination” to swell and grow in organic flux, building on the talented riffs in the hands of guitarists Joe Gettler and Evan Anderson Berry with a rare degree of complementary composition. Each passage thoughtfully combines the core foundations of metal with the power of a dedicated orchestral arrangement, marrying the two, rather than pitting them against one another in a pointless show of strength. It is with this delicate and intentional production that allows “Veil of Imagination” to move beyond the incredible and into the realm of the surreal.

Wilderun offers no opportunity for listeners to prepare before they embark on an exploration of not just a new realm of fantasy, but of their own doubts and misgivings. The crowning jewel of “Veil of Imagination” is opening track “The Unimaginable Zero Summer,” clocking in at nearly fifteen minutes long. No matter how daunting an opener this track may prove to be, not a single second is wasted in aimless wandering. From the first few moments of spoken word, a new world is framed in the abstract, one that beckons with a sweet temptation of intrigue. A gentle, wandering orchestra is introduced before launching into a crest of guitars crashing in at breakneck speed, their fierce bite backing guttural roars. The transition is one that tear listeners from a sense of false peace and throws them headfirst into burning urgency. The ebb and flow of clean and inquisitive vocals against the jarring abrasiveness of howling screams is the contrast between fire and ice, dancing together to craft an immersive emotional snare. Not once does this track stray from an intentionally built path; it progresses steadily in adept guitar work, with an unwavering and steadfast purpose to the track’s end.

There’s no question that “Veil of Imagination” should be viewed as a singular magnificent work, rather than a collection of moving parts. Multiple tracks surpassing the nine minute mark are balanced by shorter, delectable tastes of nearly pure orchestration. Both “Scentless Core (Budding)” and “Scentless Core (Fading)” serve as breaths of fresh air between an onslaught of compositions that use guitars to manipulate the heart and enthrall the senses. “Scentless Core (Budding)” provides an arrangement that is exquisite in its airiness, the melancholic relief provided by strings and soaring choral tracks that float freely. No words are needed to bask in the glory of manufactured peace, strings serving as a resting place before the inescapable self-reflection that is generated in subsequent track “Far From Where Dreams Unfurl.” Both “Scentless Core” tracks serve as the most easily digestible tracks on an otherwise densely measured, at three and five minutes respectively. 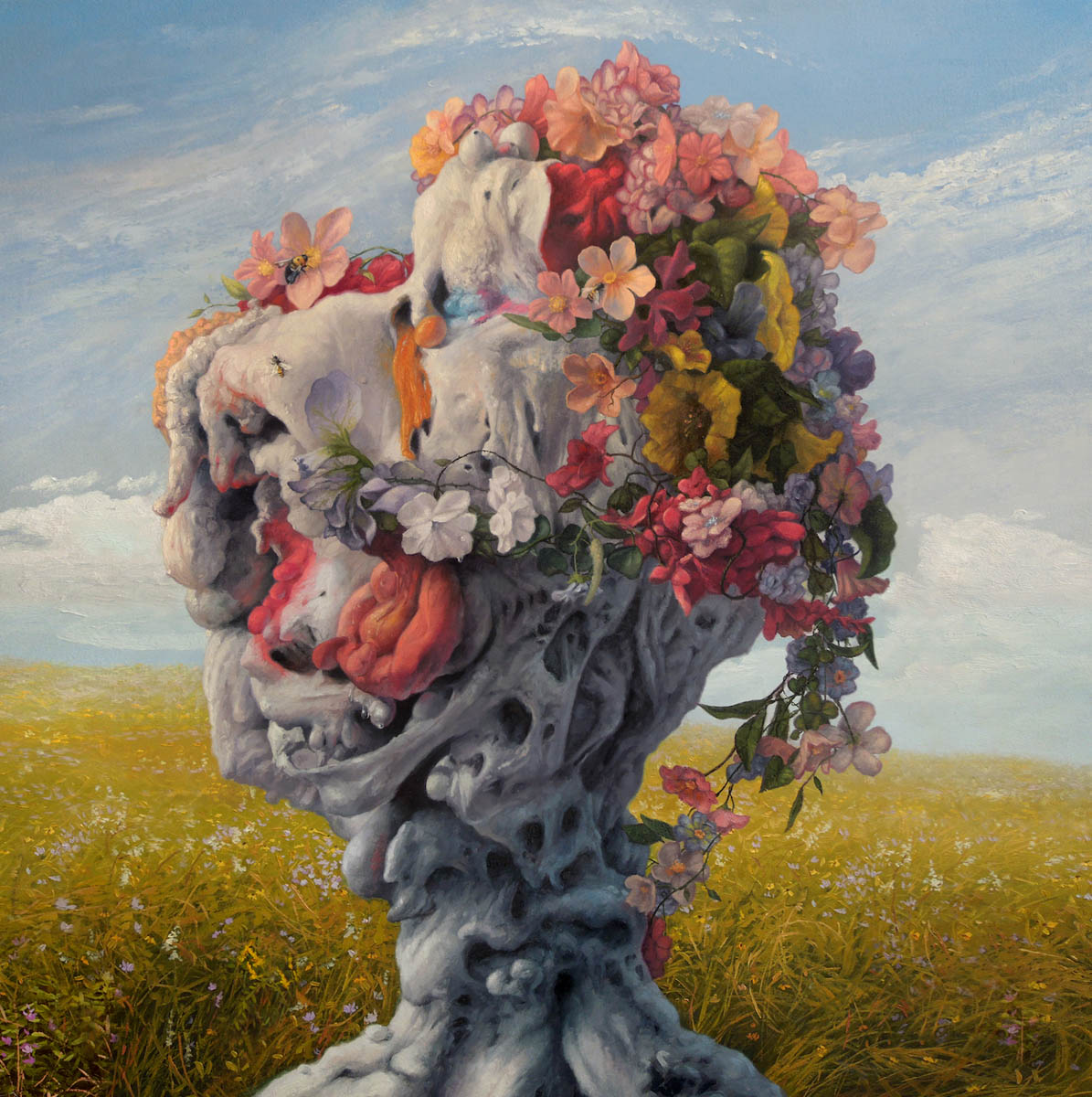 An essay could easily be devoted to the subtle intricacies and potential interpretations intrinsic to each of the eight tracks, as each are stunning in their own wondrous fashion. But of the remaining songs to be considered as highlights on an already seamless work, it is closing track “When the Fire and the Rose Were One” that listeners would benefit from enjoying with a more attentive ear. This track encompasses the many elements that make the album so incredible, not limited to its poetic and curious title. The time changes, varied tempos, and blend between orchestration and raw grit of metal all come together to conclude a tale like no other. Ending with intentional and reverberating spoken word, “When the Fire and the Rose Were One” is a fitting conclusion to an epic that is sure to leave listeners gasping for air.

An understanding of the ideal balance between darkness and light is what makes the dynamic nature of “Veil of Imagination” so compelling. As they always have, Wilderun calls upon both harsh and clean vocals to create a steady tide, albeit an occasionally uncertain one. Yet this ebb and flow that has always been a theme in their work is elevated with the use of intense orchestration; thundering percussion and heavy strings clash against the flitting air of wind instruments weaving a much more delicate melody. Nowhere to be found in “Veil of Imagination” is a predictable moment, but instead one may find a constantly rolling wave of intrigue and curiosity, a desire to discover which direction the ever-changing mood will then turn to. Each piece fits together seamlessly, transitioning from guitars to symphonic tracks, blending them together in unparalleled harmony, and then diverging again. The lyrics are not to be overlooked as an afterthought; explorative and more deeply profound than ever before, Berry explains their source as his own interpretation of how his mind seeks to understand the world. However personal they may be to Berry, there is no doubt that they simultaneously build a world of dreamlike fantasy which anyone may immerse themselves in with ease.

There is no praise too high for this ambitious and visionary work of art; it has accomplished in seventy minutes what many artists fail to accomplish in the entirety of their careers. “Veil of Imagination” delivers an otherworldly experience that combines the strengths of dynamic orchestration with the stylistic bite of unspeakably adept progressive metal. Wilderun has brought an unspoken dream into our world, and it has such an astounding beauty that some may consider it just short of terrifying. But when the time comes to listen, in all of its overwhelming splendor, it seems that one will find themselves surrendering to its magic not just willingly, but gratefully.

1. The Unimaginable Zero Summer
2. O Resolution!
3. Sleeping Ambassadors of the Sun
4. Scentless Core (Budding)
5. Far from Where Dreams Unfurl
6. Scentless Core (Fading)
7. The Tyranny of Imagination
8. When the Fire and the Rose Were One

Within the walls of “Veil of Imagination,” a dream has been brought to life, with a visionary work of art that is both terrifyingly beautiful and strikingly surreal. With unparalleled orchestral grace and dynamic songwriting structured around the timeless core tenets of progressive metal, Wilderun has created an exceptional exploratory epic of indescribable magnitude