With the inevitable heat of summer already making itself at home, there’s few options so tempting as to roll down the windows and embrace the enthusiastic nostalgia of melodic rock brought by the uplifting graces of Tokyo Motor Fist and the vibrant charm of their latest album. “Lions” is so sweet and smooth that listening to it feels almost like a guilty indulgence, something that one would sneak a taste of alone in the kitchen by the blue light of an open fridge. There’s something raw and authentic about it that makes it instantly irresistible for fans of melodic hard rock at any point from the 80s to the present. Tokyo Motor Fist have captured the most decadent tones of melodic rock and are releasing a bright ray of sonic sunshine in a world that certainly needs that pure brand of brightness.

Tokyo Motor Fist doesn’t immediately come off as a super-group, perhaps due to the superb level of cohesion and cooperation that gives no single member the sole spotlight. Though they come from a host of different histories, “Lions” makes it clear that its creators were meant to write melodic rock and perform it with all of their passion. Led by the voice of Danger Danger, vocalist Ted Poley and Trixter guitarist Steve Brown, the group also has in its ranks Greg Smith (Ted Nugent, Rainbow, Alice Cooper) and Chuck Burgi (Rainbow, Blue Oyster Cult). Experience and cooperation are the cornerstones on which “Lions” is built, smooth vocals mingling with satisfying riffs atop a backbone of reliable percussion that push the album to ever greater heights with each passing song. Such grounded compositions blossom in full from the very opening track “Youngblood,” seemingly snatched from the very height of rock radio and thrust into an unexpected present. Vast hooks capable of turning heads are a common theme persisting across “Lions,” the most notable outside of the opener being that of the electrifying “Decadence on 10th Street.”

Rooted deep in the 80s AOR scene with the occasional flash of glam, “Lions” effortlessly entertains with expert transitions between the more seductive dimensions of melody to thunderous drums meant to fill an arena. “Sedona” plays with more sultry tones, including a horn section – which give the track both warmth and depth – as the album draws towards its close. Others still seem as though they’re begging for a DJ to give them an introduction on the city’s biggest FM station, with the liveliness of “Monster in Me” infectious through its choruses and rhythmic tides. In yet another demonstration of the balance Tokyo Motor Fist has found, Brown’s solos are electrifying without becoming excessive, their length reigned in by Burgi’s steady hand. Be it in a crowded venue with thousands of other fans or on a distant and distorted radio, “Lions” is accessible for listeners seeking background music or something to focus on for a long drive in the countryside. 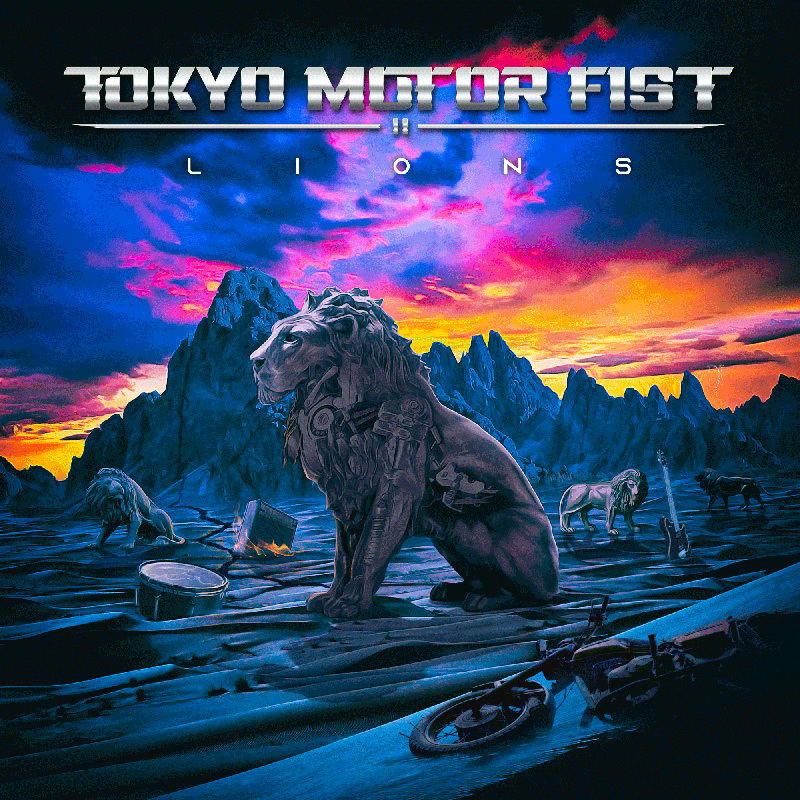 The drawback here is obviously the facts that there’s nothing on “Lions” that hasn’t been done before by some notable artist in the genre, but you knew that already before reading until this line. No part of “Lions” is groundbreaking, gaining most of its advantages by leaning into the clean mix and careful balances that go into the finest modern production. It’s certainly a testament to the caution and care that went into crafting the final sound, but it speaks more to practiced experience than novelty or exploration. One should note that while it’s certainly a product of what its creators do best, no song is a simple rehash of another artist’s trademark, and that the repetition is clearly inspiration rather than mimicry.

From the wild throes of “Around Midnight” through the distant comfort of “Look Into Me,” Tokyo Motor Fist have provided yet another soundtrack for summer that has little room to disappoint. “Lions” plays to all of its artists strengths in a demonstration of balance and sensibility, giving fans exactly what they expected with little room to maneuver. Rather than letting the narrow field of their genre hinder them, Tokyo Motor Fist have made the best of their talents with an amazingly polished album that manages to maintain variety and intrigue from start to finish. Avid fans of melodic rock certainly shouldn’t miss this one.

Siphoned straight from some of the genre’s most practiced artists, “Lions” is a showcase of the traits which allowed melodic rock to thrive for decades. A youthful heart with experienced hands, Tokyo Motor Fist delivers a consistent and enjoyable record that speaks to the genre’s timelessness.